Each week in this space we’ll be looking at some of my top DFS tournament plays of the week. We’ll be naming one player at each position and on each site for the main slate.

Notes: Just because a player is mentioned under one site doesn’t mean they aren’t also a good value on another site.

Roethlisberger appears expensive as the highest-priced quarterback on the slate, but I’d argue he’s still cheap at only $6,900. Each week last year, the highest-priced quarterback on DraftKings had an average salary of $7,635. This implies $735 in savings for Roethlisberger, who is also the No. 1 quarterback in my rankings this week. Since 2014, no quarterback averages more than Roethlisberger’s 23.5 fantasy points per game at home. Of course, he’s playing at home this week, and is also being spotted the highest implied point total of the week (30.5). Atlanta’s defense ranks third-worst in schedule-adjusted fantasy points per game to opposing quarterbacks and third-worst in points allowed per drive. The Steelers will likely go pass-heavy in what should be a high-scoring shootout and after being held under 35 rushing yards in two of their past three games. Roethlisberger is well worth paying up for this week.

In Week 1, Mixon played on 79% of the snaps, drawing 17 carries, seven targets, and totaling 56% of the team’s touches. In Week 2, he totaled 21 carries and one target, despite exiting early due to injury. Now, he appears locked into a massive workload with Giovani Bernard out with a sprained MCL. Including the two weeks Mixon missed, Cincinnati’s top rusher is averaging 20.2 fantasy points per game, or what would rank seventh-most. The matchup this week appears soft as well, with Miami ranking bottom-six in both rushing and receiving fantasy points per game allowed to opposing running backs.

Jones’ target totals have been underwhelming to start the year (9, 6, 7, and 6) but, while the quantity of these targets was low, the quality was great. Despite ranking 33rd among wide receivers in targets per game (7.0), he ranks seventh in yards in air per game (120.0), seventh in deep targets per game (2.0), second in targets inside the 10-yard line per game (1.0), and first in end-zone targets per game (2.25). Ranking 24th in expected fantasy points per game, he’s a clear value as only the 36th-highest-priced wide receiver on the slate. This isn’t the matchup to sleep on him either, given Jones’ history against Green Bay. Since 2016, he averages 24.7 fantasy points per game in his last four games against Green Bay.

Kelce’s value is hard to ignore on DraftKings this week. He’s $500 cheaper than his average salary last year (when he led the position in fantasy points per game), despite Kansas City’s passing attack averaging 40.8 more passing yards per game and a staggering 1.9 more passing touchdowns per game than last year. Kelce is seeing better volume this year as well, averaging 9.5 targets per game (as opposed to 8.1 last year) and a 27.5% target market share (as opposed to 22.5% last year). While the matchup — against the Jaguars — isn’t good, it’s not terrible. Since Week 1 of last year, 22% of Jacksonville’s receiving fantasy points allowed has gone to tight ends, which ranks 12th-most. 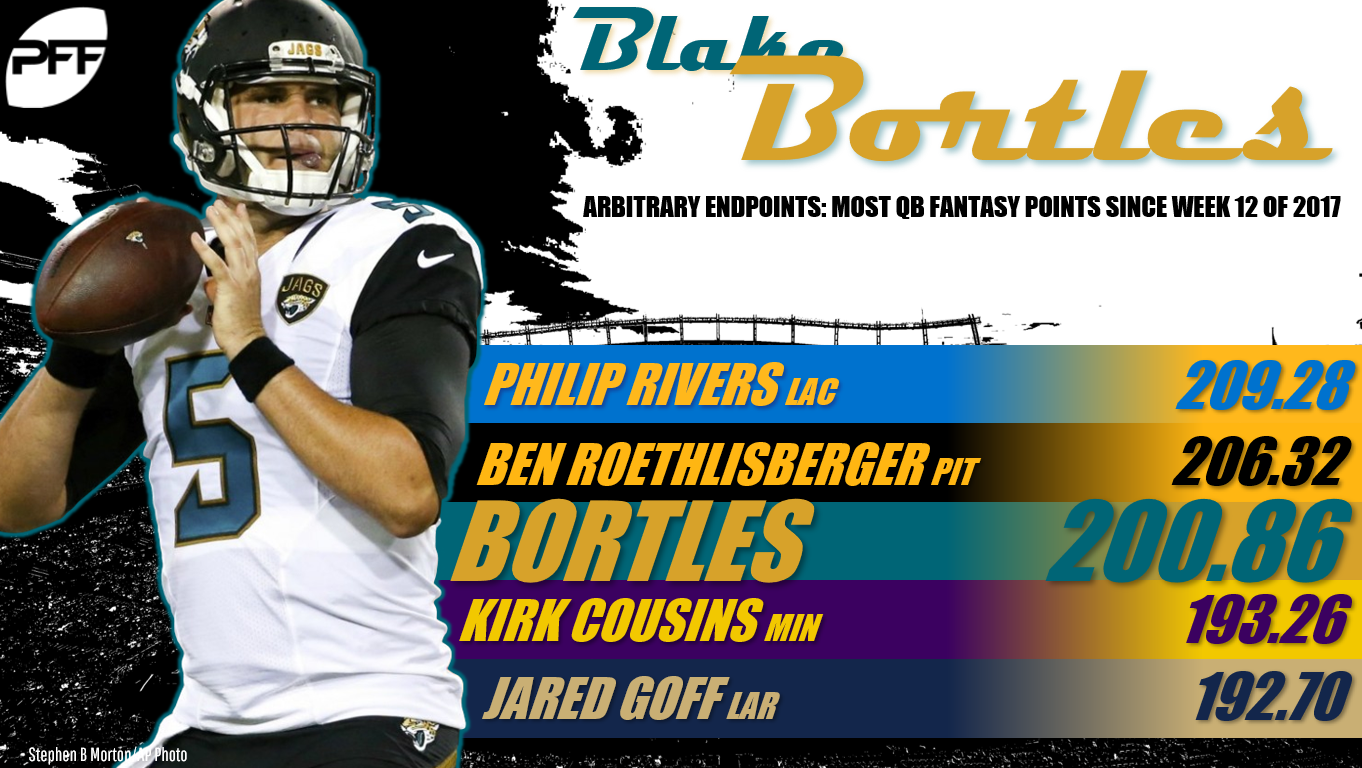 Over the past two seasons, Bortles averages 4.7 more fantasy points, 74.2 more total yards, and 1.6 more red-zone attempts per game in games Leonard Fournette was inactive. Over his last 10 games, Bortles is actually third among all quarterbacks in fantasy points, averaging 20.1. He also has an ideal matchup this week, against a Kansas City defense that ranks second-worst in both total passing yards allowed and points allowed per drive (3.03).

Gurley averages 32.5 fantasy points per game across his last seven games. He’s scored at least 20.0 in each of his last eight games. The last time he faced Seattle, he scored 45.0. Now, the Rams are 7.0-point favorites and the Seahawks are now without S Earl Thomas and LB Myc. Over the past two seasons, Gurley comprises 34% of his team’s total yardage and 42% of their total offensive touchdowns. Both numbers easily lead the running back position. If the Rams hit their implied point total, then Gurley is going to be worth paying up for.

Brown is only the 32nd-highest-priced wide receiver on FanDuel, which is about as nonsensical as Jones’ price on DraftKings. Among wide receivers, over the past three weeks, Brown ranks ninth in expected fantasy points per game and 17th in actual fantasy points per game. I went into further detail on Brown in my weekly Actual Opportunity piece, but suffice to say he fills a role the Ravens have been hunting for for years now, and he’s filling it as well as Torrey Smith ever did. All of the above makes him an ideal tournament option and especially so on FanDuel, given scoring. He’ll also get to run over half of his routes against E.J. Gaines and T.J. Carrie this week. Carrie has surrendered the second-most plays of 30 or more yards (10) since 2015. Gaines was historically bad in 2016 and would be just a bench player for the Browns if not for an injury to Terrance Mitchell.

McDonald is a glaring value on FanDuel and hard to ignore, despite not seeing a massive workload. He’s seen exactly five targets in each of his three games, while running a route on only 46 percent, 63 percent, and 66% of Roethlisberger’s dropbacks over this stretch. That’s fine — he’s still way too cheap given recent production and Pittsburgh’s implied point total.