Week 2 DFS locks of the week

After a wild fantasy football Week 1 in which most of the chalk hit, it’s time to gear up for another weekend of DFS action.

The scores won’t be nearly as high in Week 2, and there aren’t as many obvious plays as there were a week ago, but there are definitely still some great players in great spots this weekend. Here are some of the players you can feel confident plugging into your DFS lineups. 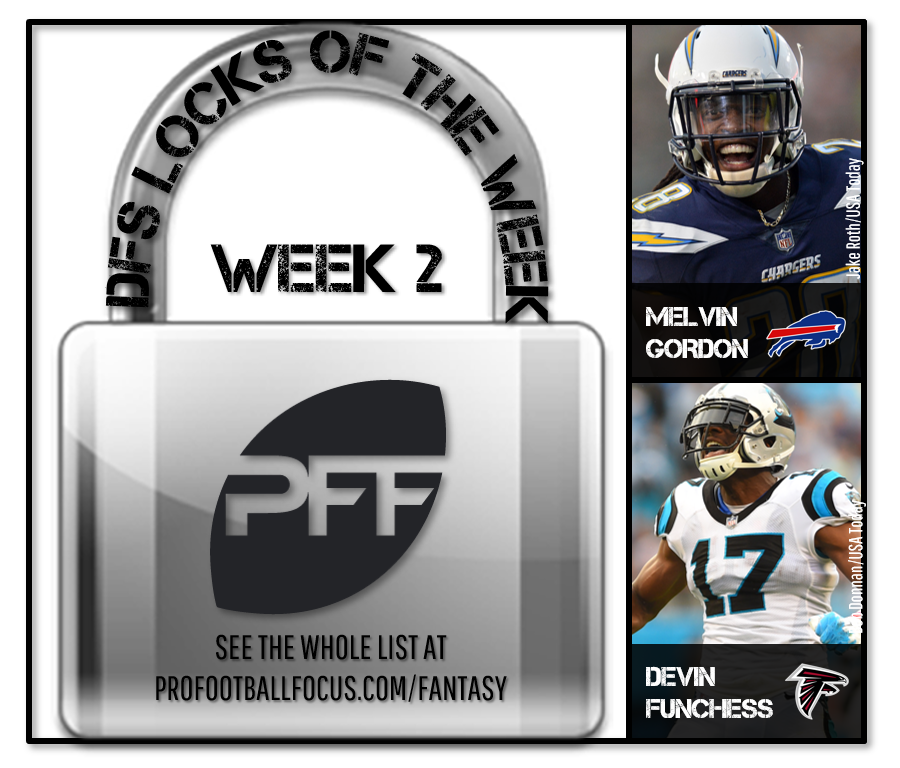 Big Ben at home always needs to be on your radar. Big Ben at home against one of the league’s worst passing defenses in a game with the highest over/under of the week (52.5), you have to consider him a lock.

Mahomes will be on the field opposite Roethlisberger in that high-scoring Chiefs/Steelers tilt, and Mahomes is much cheaper across the DFS industry. Mahomes had a league-leading average depth of target of 14.6 yardslast week, and that could be his norm throughout the season. He threw for four scores and tacked on five rushes — which is always a great thing for fantasy quarterbacks.

Taylor completed just 15 of 40 attempts in Week 1, but weather played a large part, and he was still able to rack up the fantasy points thanks to his rushing ability. He carried the ball eight times for 77 yards and a score to go along with 197 passing yards and a score. Taylor’s dual-threat ability, cheap price, and matchup (in New Orleans with shootout potential) makes him a great option this week.

Kamara won’t touch the ball 25-plus times like the other expensive running backs, but his per-touch fantasy scoring ability breaks all logic. He effectively serves as an additional receiver in New Orleans; Kamara ran 37 pass routes last week — tied with Emmanuel Sanders, and ahead of players like Zach Ertz, Brandin Cooks, Kenny Stills, A.J. Green, and others. Kamara draws the Browns, who gave up 192 total yards to James Conner last week.

Gurley squares off against the Cardinals, who gave up 34-168-1 on the ground and 8-133-1 through the air to running backs last week. That’s 42 touches, 301 yards, and two scores to opposing running backs. Considering that Gurley handles about 90 percent of Los Angeles’ backfield work, he’s in for a big game.

Gordon shredded the Chiefs last week with 166 total yards, and he gets another plus matchup in Week 2 against the Buffalo Bills in a game that should provide a very positive game script for the Chargers. Gordon is also significantly cheaper than some of the other running backs who will see 20-25 touches.

Conner’s price went up in DFS this week, but not by enough. He handled 100 percent of Pittsburgh’s backfield’s workload last week — 36 total touches — and gained nearly 200 total yards while scoring twice. His price could go up another $2,000 across the industry and he’d still be worth a look against the Chiefs, who gave up the most fantasy points to opposing running backs in Week 1.

Not that you need a great reason to play Brown on any given week, but this is truly a smash spot for him. He has the second-best individual WR/CB matchup of the week and faces a Chiefs defense that gave up the second-most receptions (208) and yards (2,836) to opposing receiver last season — and got off to a rocky start in 2018 by giving up over 400 passing yards to the Chargers. Brown is an auto-include.

Jones is another player who has a plus individual matchup. And it’s not just the individual matchup that’s enticing this week: Jones usage in Week 1 was extremely promising. As PFF’s Jeff Ratcliffe noted, Jones led all receivers with three end-zone targets in Week 1. Jones’ 18 targets also led the league last week, as did his six red-zone targets.

Agholor tied for the team lead with 10 targets last week, and while he posted a meme-able line of 8-33-0, those cheap receptions add up quick. Not to be overlooked is the fact that Agholor has the fourth-easiest individual WR/CB matchup of the week against Tampa Bay rookie M.J. Stewart, who earned a poor PFF grade of 55.3 last week. Buccaneers corner Vernon Hargreaves is out for the season, and Brent Grimes has not been practicing so far this week. If Agholor catches eight passes again, he’s going for much more than 33 yards.

Kittle will be the chalk at tight end, with expected DraftKings ownership at 13.3 percent and expected FanDuel ownership at 13.2 percent. Kittle led the 49ers in targets with nine last week (next-closest was Trent Taylor, with six), he also saw three red-zone targets and one end-zone target. Plus, Marquise Goodwin is looking to be on the doubtful side of questionable.

Eric Ebron got the touchdown last week, but Doyle had four more targets and three more receptions than Ebron while playing 94 percent of the snaps compared to Ebron’s 44 percent rate. Doyle also ran 55 pass routes compared to Ebron’s 25. Doyle is the primary tight end in Indianapolis and he draws the Washington Redskins in Week 2, who struggled against tight ends last year (sixth-most fantasy points given up to the position).

I might get fired for putting Cook in the “Locks” article — though, to be fair, he’s about a mile behind Kittle and Doyle in my opinion — but we can’t ignore him. Cook had 12 targets, nine receptions, and 180 yards last week, and while that damage was likely schemed by Jon Gruden to take advantage of Los Angeles’ weaknesses over the middle of the field, there’s something to be said about the fact Cook saw twice as many targets as Jordy Nelson and Amari Cooper combined. Cook also has the third-best individual TE matchup of the week against. The matchup against the Broncos isn’t to be feared: Denver gave up the fourth-most fantasy points to tight ends last year, and they started off 2018 on the same foot (fourth-most fantasy points ceded to the position).