Week 1 DFS locks of the week

PITTSBURGH, PA - DECEMBER 28: A.J. Green #18 of the Cincinnati Bengals carries the ball against the Pittsburgh Steelers at Heinz Field on December 28, 2014 in Pittsburgh, Pennsylvania. (Photo by Gregory Shamus/Getty Images)

We had a DFS appetizer Thursday night with the “showdown slate,” but the main course is finally on its way for fantasy football aficionados.

We’ve had weeks to (over)analyze the Week 1 matchups, and now it’s time to piece it all together. This piece will go over the players you should feel most confident in at their given price points for DFS this week.

Luck checks all of the boxes in his first game back: He’s not on the injury report, he’s playing at home in the dome, the Colts are favored to win the game, and the game has the third-highest over/under on the main slate. He’s also cheaper than he otherwise would be in situations like this because there were still questions about his shoulder earlier this summer. 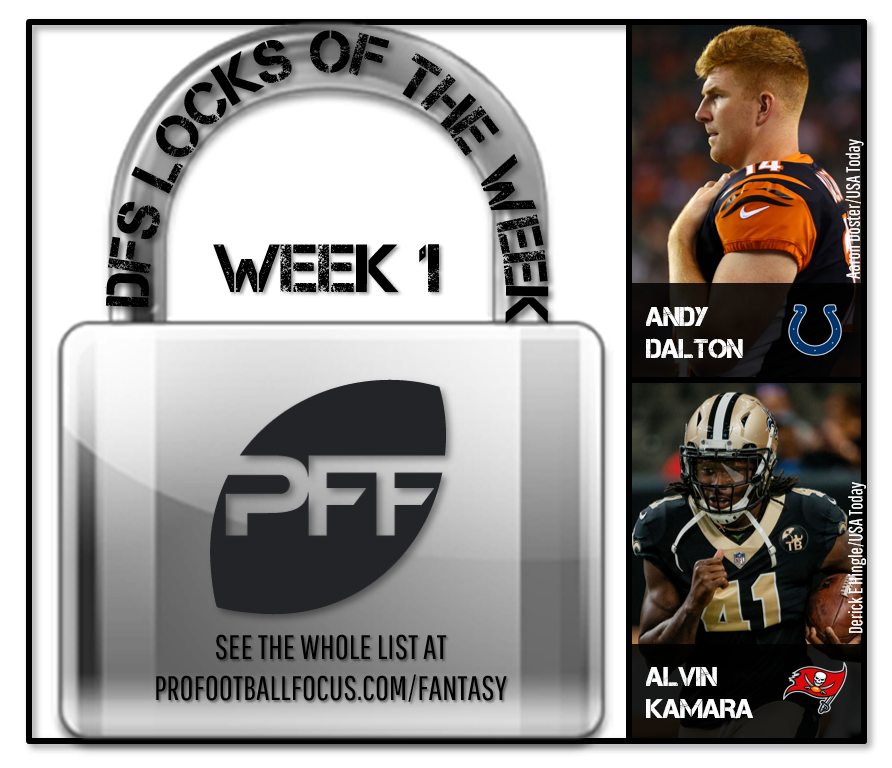 Dalton is one of the most attractive cheap quarterbacks in Week 1 against the Colts. As noted above, the game is expected to be one of the highest-scoring affairs of the weekend. The Colts have a poor secondary and Dalton was brilliant in the preseason, completing 71 percent of his 31 attempts for 324 yards, four touchdowns, and an interception. That’s massive output for what amounted to one game’s worth of volume.

Taylor is only $5,400 on DraftKings and $6,600 on FanDuel, but we have him projected to score the third-most points on FanDuel and fourth-most on DraftKings. The Browns have an explosive receiving corps (and one of the league’s best pass-catching backs), and they’ll be playing catch-up against the Steelers all game.

We have Kamara projected not only as the top running back on the slate but as the top overall scorer regardless of position. Kamara and Mike Gillislee are the only running backs on the Saints roster in Week 1, and Kamara roasted the Buccaneers last year with four touchdowns and 280 yards from scrimmage in two games. We expect Kamara to be the highest-owned player on both DraftKings and FanDuel.

The Chargers are home favorites against the Chiefs in a game that has the fourth-highest over/under on the main slate (48) — and our projections actually have these two teams putting up 49 total points. Gordon averaged 21.4 DraftKings points per game in two contests against the Chiefs last year, and that included one game without a reception (which won’t be the case again in Week 1).

People identified Burkhead as a value on both sites when the values came weeks ago, and he has only become more of a glaring value since then. NESN’s Doug Kyed believes we can expect Burkhead to be New England “top ball carrier in Week 1,” which isn’t a huge surprise, but it quells fears about Burkhead’s health (he’s also not on the injury report). The Patriots are home favorite in what should be the highest-scoring game of the week, and Burkhead is extremely cheap. There’s nothing not to like.

It’s looking like Conner will be the Week 1 workhorse for the Steelers, and he’s going to one of the highest-owned players on the slate as a result because he is so cheap and should see a ton of work both on the ground, at the goal line, and through the air. It helps that the Steelers offense has the second-best OL/DL matchup for running back on the main slate.

We’ve mentioned the Bengals-Colts game a few times already, but Green might be the best play of any player in that contest. Indianapolis’ corners include Pierre Desir, Kenny Moore, and Nate Hairston. Green is an elite wideout going up against a group of corners who all had PFF grades below 70 last year. Green has also been better on the road throughout his career, with 91 yards and 0.63 TDs per game on the road, compared to 70 yards and 0.49 TDs per game at home.

Thomas draws rookie second-round pick Carlton Davis in Week 1 in what will be Davis’ first-ever game in the NFL. Davis was only targeted five times in the preseason, but he gave up 57 yards on three receptions. Thomas could gain chunk yardage against the rookie playing at home. Overall, the Buccaneers gave up the most fantasy points to opposing receivers last year.

The Patriots/Texans game will likely produce the most points of the weekend, it’s in New England, and Hogan is the only trustworthy receiver on the Patriots. He’s also too cheap on both sites given these factors. Hogan was a top-10 fantasy receiver before being injured last season, and there’s no doubt he’ll be a focal point of the passing attack in Week 1. Hogan also shredded the Texans defense with a line of 4-68-2 last season.

Cole, Jacksonville’s No. 1 wideout for Week 1, is simply too cheap ($3,800 on DraftKings, $4,500 on FanDuel) to ignore. His individual matchup against Janoris Jenkins is not the best, but it’s the price tag and expected volume that makes Cole a steal in Week 1. Over a four-week stretch (Weeks 13-16) last year, Cole averaged 110 yards per game, so we know he can put up big numbers.

Gronkowski hit the Texans with 8 receptions, 89 yards, and a score on 10 targets in their meeting last year, and he’ll likely see double-digit targets once again in Week 1 with Hogan serving as the only other known commodity in New England’s passing attack.

Doyle has the best individual tight end matchup of the week. Doyle is the 13th-most-expensive tight end on DraftKings, but we have him projected to score the sixth-most points.

Walker gets a chance to start his 2018 campaign off hot against the Miami Dolphins, who gave up the most fantasy points to opposing tight ends last season. On average, tight ends posted a line of 6-65-0.63 against the Dolphins.