This isn’t meant to be a comprehensive, one-stop-shop for all things DFS in Week 5. Rather, it’s just an early look at the notable takeaways. Check back later in the week as our team offers up full breakdowns of every approach to the slate. But you can start your DFS week here.

To target the breakout game for a fantasy player you always want to follow the opportunities the player is getting. Montgomery is underperforming based on his workload, and it seems a matter of time before he has a breakout game. He is coming off a week with his season-highs in touches (24) and backfield snap percentage (69%). Trust the volume, and at a cheaper price, he offers great value. 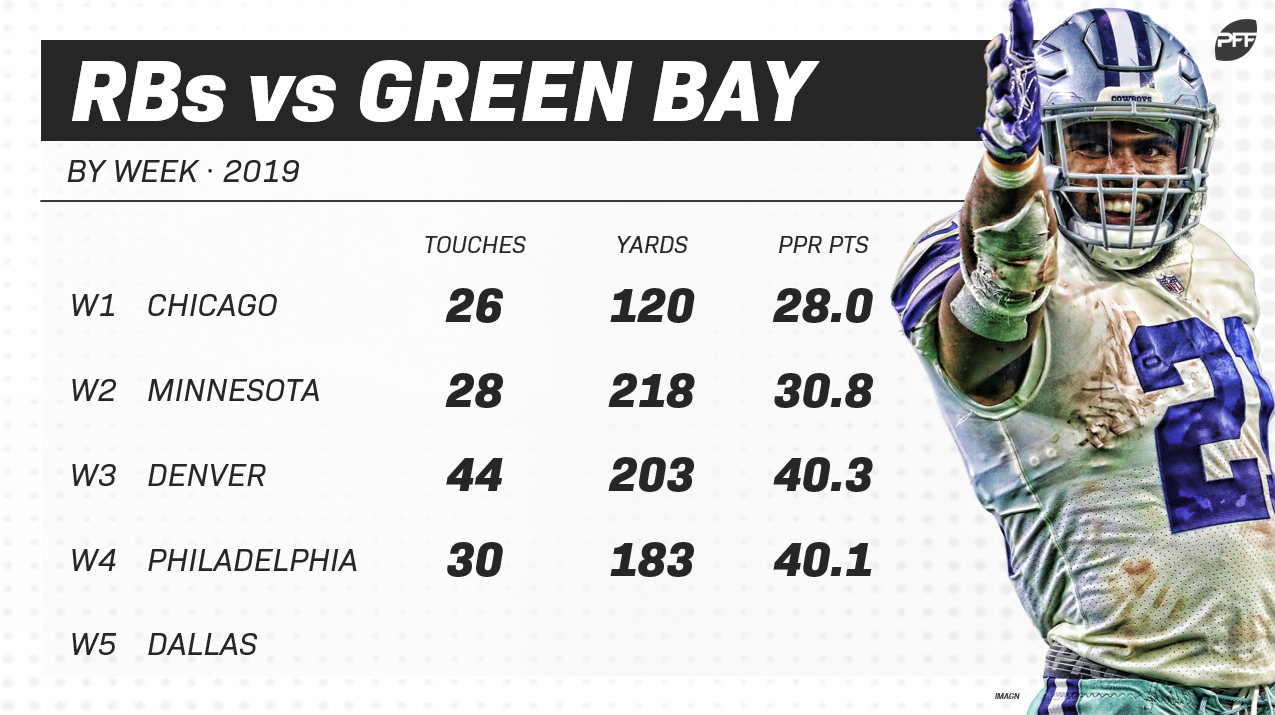 Packers defensive coordinator Mike Pettine has shown a bend-but-don’t-break approach through four weeks. He seems to want to focus on limiting the passing game and being vulnerable to the run game, as he has had a second linebacker on the field just 26% of the snaps. This has allowed teams to be more physical at the point of attack, and we saw the Eagles expose this Thursday to the tune of 163 rushing yards (plus 20 receiving) and 3 touchdowns. In the past three games, the Packers have allowed 163 rushing yards per game. Expect Elliott to get fed in this game.

The Patriots offense had one of its worst performances in recent memory against the Bills in Week 4. The team draws a much easier matchup this week against the Redskins, and Edelman has the most exploitable matchup on offense. He draws Fabian Moreau in coverage, who has not been tested much, but on 9 targets his way he has allowed 8 receptions for 98 yards. Quinton Dunbar on the outside for the Redskins secondary has been extremely good, allowing a passer rating of 29.9. In a get-right game for the Patriots offense, Edelman should have a big week.

Fuller seems like a ticking time bomb this year. The opportunities have been there, as he is 12th in air yards, but he and Watson have not been able to connect deep yet. This matchup against the Falcons sets up as a potential shootout, and Fuller will have a favorable matchup when he is against Isaiah Oliver, who has allowed the most yards on the Falcons secondary with 195 and 3 TDs surrendered. Fuller makes for a good GPP stack alongside Deshaun Watson.

This Falcons/Texans game just sets up nicely for the passing games of both teams. It should be a fast-pace game environment as both teams are top 10 in pace in neutral gamescripts. It has the highest over/under on the main slate currently at 49 points, and the Falcons have not been shy about throwing the ball with the most pass attempts per game so far. I expect the run game to continue to struggle against a solid Texans defensive front, and that gives Ryan good upside at a cheap price.

With the injury to Christian Kirk, Fitzgerald should be a player DFS players gravitate toward. It is a juicy matchup against a Bengals defense that has looked lost at times and on an offense that plays at a great pace and throws the ball early and often.

Alongside Fitzgerald is Johnson, who has one of the best matchups of the week. The Bengals struggled to stop wildcat against the Steelers Monday night, and this should draw Johnson’s attention, given how much damage James Conner and Jaylen Samuels were able to do as receivers for Pittsburgh. They combined for 16 receptions, 140 yards, and a touchdown through the air. Johnson is tied for the most routes run among RBs and has the potential to flirt with 100 receiving yards again this week.

For the reasons mentioned above in the Salary Changes section, Elliott has monster potential against Pettine’s defense and should land in a lot of lineups this week.

This one is tough to gauge, but the Buccaneers secondary has been so bad over the past two weeks that I can see people going the way of Thomas. He has been solid in two bad gamescripts of the past two weeks with 5/54/1 and a 9/95 and this game sets up nicely. Wide receiver performances against the Buccaneers the last two games include: Robert Woods 13/164, Cooper Kupp 9/121/1, and Sterling Shepard 7/100/1. A lot of that damage took place over the middle of the field, where Thomas does the majority of his work.

Graham will be very popular this week if Davante Adams does not play. It will also be in part due to no tight end having an obviously great matchup. He offers salary relief for other positions and could be one of the most popular players if Adams is in fact out.

Winston has been on fire the past two weeks, and people may chase the points here. He went over 380 yards and 3 TDs in both games and is facing a Saints defense that did struggle a lot against QBs in the first three weeks. On the season, the Saints are allowing the second-most fantasy points per game to QBs.

The Buccaneers defense has done an insanely good job at limiting RB production so far this year. Before Saquon Barkley left the game with his injury in Week 3, he was held to 10 yards on 8 rushes. In Week 2, Christian McCaffrey had one of his worst games, with 16 rushes for 37 yards. The defensive front is very stout and should focus primarily on limiting Kamara this week.

Conner had his most impressive game so far this season in Week 4, but it seemed most due to the inability of the Bengals defense. What is even more alarming for Conner going forward is the new usage of Samuels. Samuels and Conner both had 18 touches and will have a tougher test in a matchup against the Ravens.

Evans vs. Marshon Lattimore has been a bit of a grudge match of the past few years. However, the majority of the matchup success has gone to Lattimore. In four games against Evans, he has held him to 4/86, 7/147/1, 5/55, and 1/13. Lattimore seemed to find his confidence in an impressive performance against Amari Cooper limiting him to just 39 yards, and I expect Evans to be held in check again in this matchup.

The weapons around Ertz are starting to get healthy. Dallas Goedert was back last week who will continue to take away red zone looks from Ertz. DeSean Jackson has a chance to come back this week, and Alshon Jeffery will be healthier 10 days removed from the last game. The Jets have not been tested against a legit TE yet, but through three games they have allowed the fewest fantasy points per game to the position. Tight ends have gone for 5 receptions and 81 yards against them so far.

Valdes-Scantling is priced up as the WR22 on DraftKings, WR20 on FanDuel this week. That is a steep price to pay even if Adams does sit. He is not proven as being able to handle the attention the No. 1 WR garners in an offense, and I expect the Packers to rely more on their running game if Adams is out. 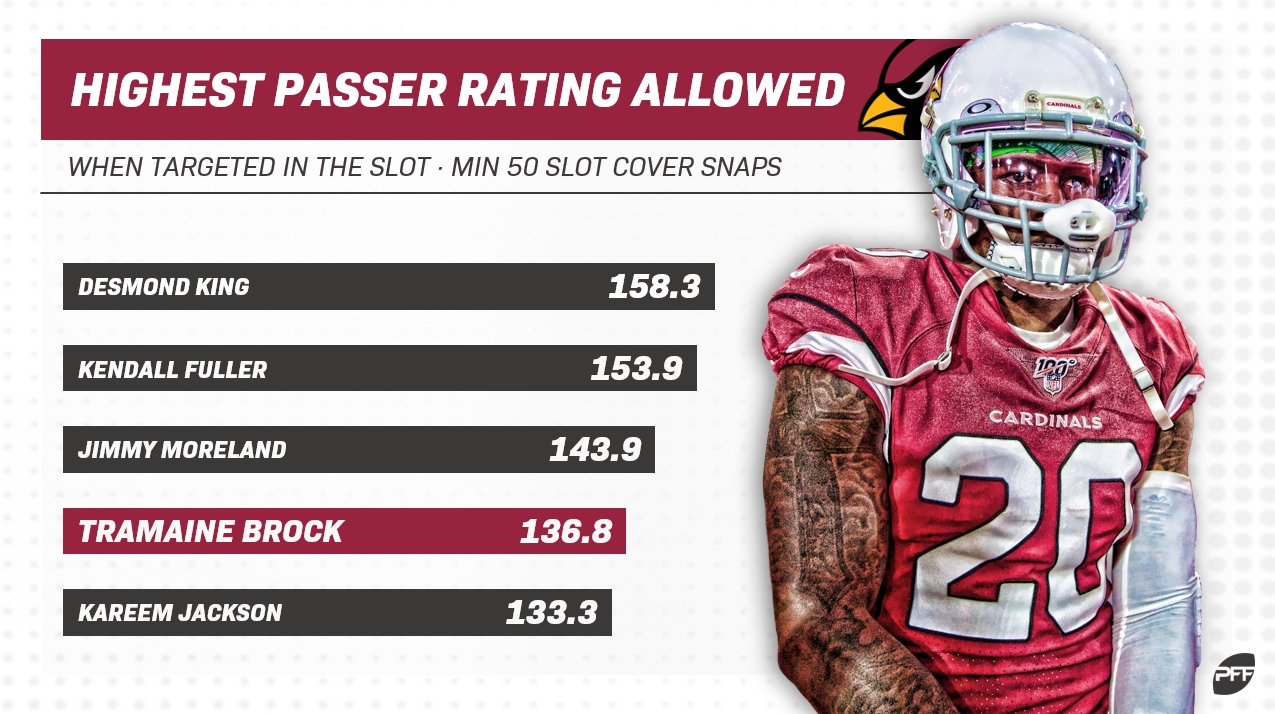 This matchup against the Cardinals is a perfect spot for Boyd to see a lot of targets. Cardinals slot cornerback Tramaine Brock is allowing 239 yards in coverage and a 146.8 passer rating. The Bengals offense will be aided by the No. 1 neutral gamescript pace of the Cardinals offense, which will allow for more opportunities for Boyd.

Without Adams Thursday, Aaron Rodgers looked Graham’s way right away. He saw 4 targets in just 10:05 in game time and ran the second-most routes of all TEs last week. Byron Jones should give Valdes-Scantling some trouble on the outside and funnel work to Graham (again, assuming Adams is out).

This seems like a great week to see if Melvin Gordon coming back at his old work load, and it allows a buy low on Ekeler’s salary. Gordon should be limited coming back; I expect him to see at most 50% of the snaps. It is a dream matchup against the Denver Broncos, who could not stop the Jaguars running attack last week. On just 37 carries, Leonard Fournette and Ryquell Armstead combined for 267 yards. Bradley Chubb was just placed on IR, which makes this defense worse going forward, and Ekeler remains No. 1 in receiving yards among RBs.

The potential is always there for Watson. He has shown his volatility this year with two great fantasy performances and two dreadful ones. This sets up as a week where he does in fact hit his potential. He has the fourth-most rush attempts among QBs and as a passer has an average depth of target of 10.5 yards. If he connects on a few deep balls, he could be the No. 1 QB on the main slate this week. The over/under of 49 is the highest on the main slate, and DeAndre Hopkins is due for a breakthrough game with just 141 yards and 0 TDs the past three weeks.