This isn’t meant to be a comprehensive, one-stop-shop for all things DFS in Week 14. Rather, it’s just an early look at the notable takeaways. Check back later in the week as our team offers up full breakdowns of every approach to the slate. But you can start your DFS week here.

After it looked like Crowder had a great weekly floor with Sam Darnold on the field, he has now delivered two straight duds. In those last two games, he has posted just 1.8 and 2.8 fantasy points. However, this now presents a perfect opportunity against the Dolphins to buy low on him and get him at a lower ownership. He had 8 catches for 83 yards and a touchdown in the first matchup against the Dolphins. Miami has given up the sixth-most fantasy points to wide receivers and Crowder is a potentially great value if the Jets offense can get back on track.

Expectations for the Lions offense were not great on Thanksgiving with third-string quarterback David Blough, but he looked much better than anticipated. He was able to throw for 280 yards with 2 TDs and now gets a friendlier matchup here against the Vikings. In this same matchup against the Vikings in Week 7, Jones had a career day with 10 catches for 93 yards and four touchdowns. The Lions defense was not able to contain the Vikings offense at all as they scored 42 points and if that is the case again this would be a positive gamescript for Jones. It is a plus matchup against Xavier Rhodes, who has allowed the seventh-most yards among CBs and a 132.6 passer rating in coverage. Adding to his potential ceiling is the fact that Jones continues to be a go-to guy in the red zone for the Lions with 27 red-zone targets on the season (eighth among WRs). 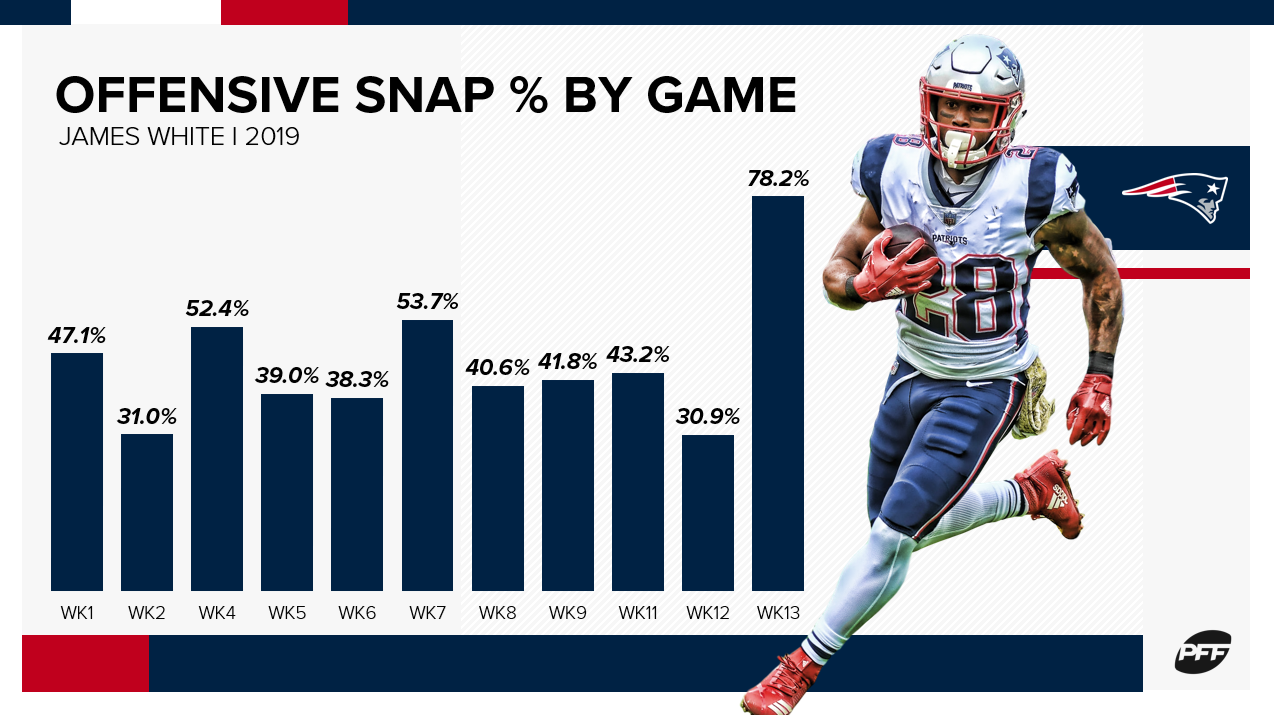 After finishing seventh in PPR scoring among RBs last year, this season has been a major fantasy disappointment for White. The Patriots offense has been struggling for much of the year, but what kick-started them this past game was involving White a lot more. He saw a season-high 14 rushing attempts and also saw 9 targets, his most since Week 6. He turned it into 37.7 fantasy points and was the top fantasy RB in Week 13. It is tough to expect that many carries again, but with how much the receivers have been struggling to create separation, White could be in line for close to 10 targets again this week. He also saw 78% of the snaps this past week, which was another season high. It is projected to be one of the higher-scoring games for the Patriots this week against the Chiefs with an over/under of 48.5 points, and White should be a focal point of the offense.

Tannehill continues for a be a good value at his current salary despite a down fantasy performance this past week. What held him back this past game was only 5 rushing yards — he had 30-plus rushing yards in each of the three prior games. We should see more rushing yards for Tannehill this week. The Titans have a healthy team total of 25.5 points, pointing to Tannehill’s potential scoring opportunity. The lower weekly pass attempts does limit his upside, but he makes for a great play in cash games this week if you want to save some salary at QB.

Henry has been a weekly staple of highlighting chalk recently due to how well he has been playing, and that does not change this week. He has had four straight games with 20-plus fantasy points and draws another solid matchup against the Raiders here. Tannehill has helped the offense be much more consistent and Henry has established himself as one of the safest plays at RB. He should draw plenty of ownership again this week.

The Parker that everyone pegged as a breakout in recent seasons has finally arrived. He has been flashing his crazy athleticism and jump-ball ability over the recent weeks and has the opportunity to do so again against the Jets. He has seen 9-plus targets in the last four games, which will draw intrigue, and had 15.7 fantasy points in the first matchup against the Jets. Having been a consistent fantasy scorer all season long and now showing a big fantasy ceiling, Parker should be popular this week.

Doyle was a trendy value pick at tight end last week after Eric Ebron went on IR, and lineups should be back on him again this week. It is a favorable matchup against the Buccaneers, who allow the fourth-most fantasy points per game to TEs. Last week, Doyle saw a season-high 12 targets and had a 94% snap share. He also ran the second-most routes among TEs.

Moore has been extremely consistent in recent weeks. In seven of his past eight games, he has scored double-digit fantasy points. In the past four weeks, he is actually first in air yards among WRs. He draws a favorable matchup against the Falcons and should have a good amount of ownership.

Mahomes has not flashed the same huge upside he had last year, and you shouldn’t expect it to happen against the stingy Patriots secondary. They are allowing the fewest fantasy points to QBs and the fewest to WRs. The Texans had success last week using Duke Johnson and Darren Fells in the short passing game, but it is tough to see the Chiefs implementing that same style offense with a banged-up RB group, and Travis Kelce should draw more attention than Fells did. The salary as QB2 on the week is hard to justify paying up for.

Kamara has only scored in one of the 10 games he has played this season. He certainly has been a frustrating player to roster in seasonal and daily fantasy and this matchup against the 49ers should not do him any favors. They allow the second-fewest fantasy points to RBs. Defenses have started to focus on taking Kamara away in the passing game recently, with him averaging just 5.4 yards per catch in his four games back from injury. There is also the concern that the injury is lingering, as he has not looked as dynamic as he had in recent seasons in the open field. The 49ers defense was able to neutralize the best offense in football in the Ravens and are likely to give Kamara and this Saints offense some trouble. 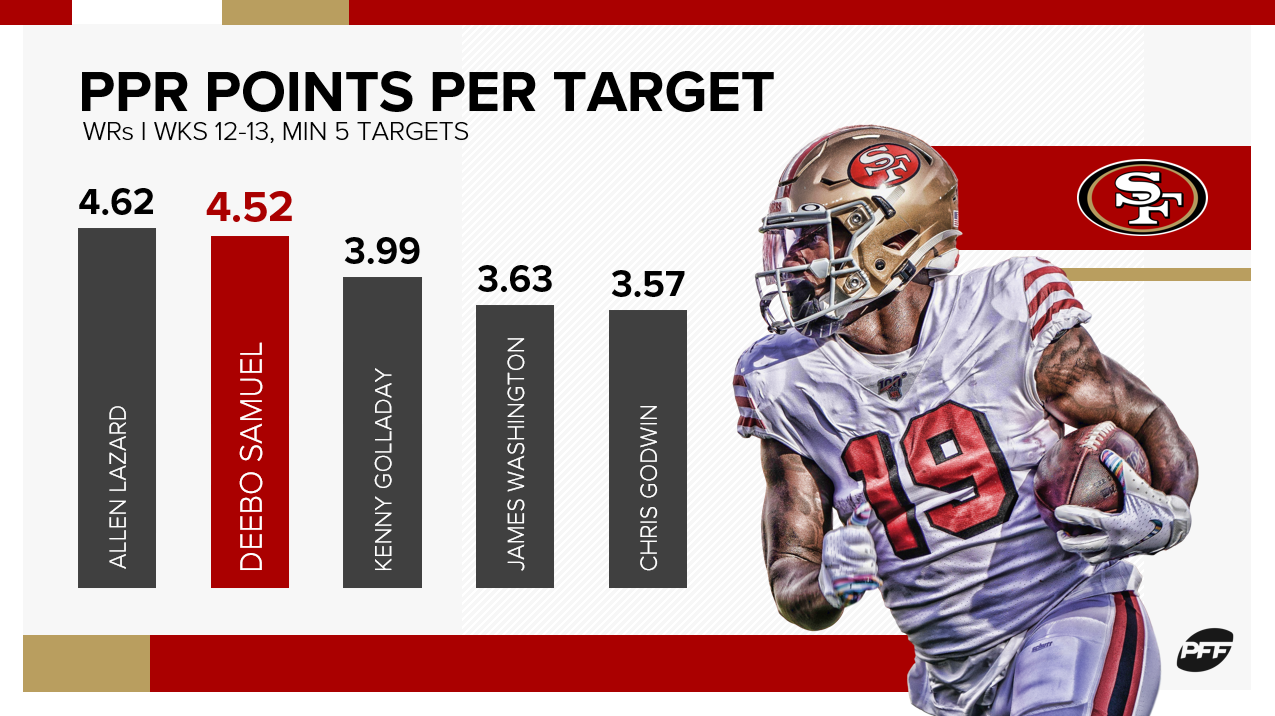 Samuel has been as efficient as he could be in the past two games. He had 2 targets in Week 12 and had 13 fantasy points and 4 targets in Week 13, resulting in 14.1 fantasy points. The little opportunities he is getting is concerning with Emmanuel Sanders and George Kittle back and entrenched in the offense. Samuel is a fade this week.

Hunt is similar to Samuel in that he is overproducing based on his opportunities. He is averaging 11 touches per game but averaging 14.1 fantasy points. There should be some regression and this matchup against the Bengals projects to be more of a Nick Chubb game.

The volume was there last week for Freeman against the Saints with 21 touches, but it was tough sledding against the Saints, who have been elite at stopping the run this year. This week he draws a much softer matchup against the Panthers, who have allowed the third-most rushing yards to RBs, the second-most fantasy points. The game has the third-highest over/under of 47.5 on the slate and if the Falcons use Freeman in a featured role again here, he can return a lot of value on his $5,400 (DraftKings)/$6,000 (FanDuel) salary.

Pascal has been a tough player to predict this year but makes for an intriguing GPP play against the Buccaneers secondary. This is assuming T.Y. Hilton is in fact out — Frank Reich did not give an encouraging update on Hilton, saying he is hopeful he plays again this season. Without Hilton, Pascal was on the field for 100% of the snaps and had a season-high 10 targets. What has limited his upside is when the Colts go more run-heavy but against the Buccaneers (who funnel production into the passing game), I expect the Colts to be forced to throw more again this week. With Hilton and Parris Campbell highly questionable this week, Ebron and now Chester Rogers on IR, the distribution of targets are starting to thin out in favor of Pascal.