This isn’t meant to be a comprehensive, one-stop-shop for all things DFS in Week 13. Rather, it’s just an early look at the notable takeaways. Check back later in the week as our team offers up full breakdowns of every approach to the slate. But you can start your DFS week here. 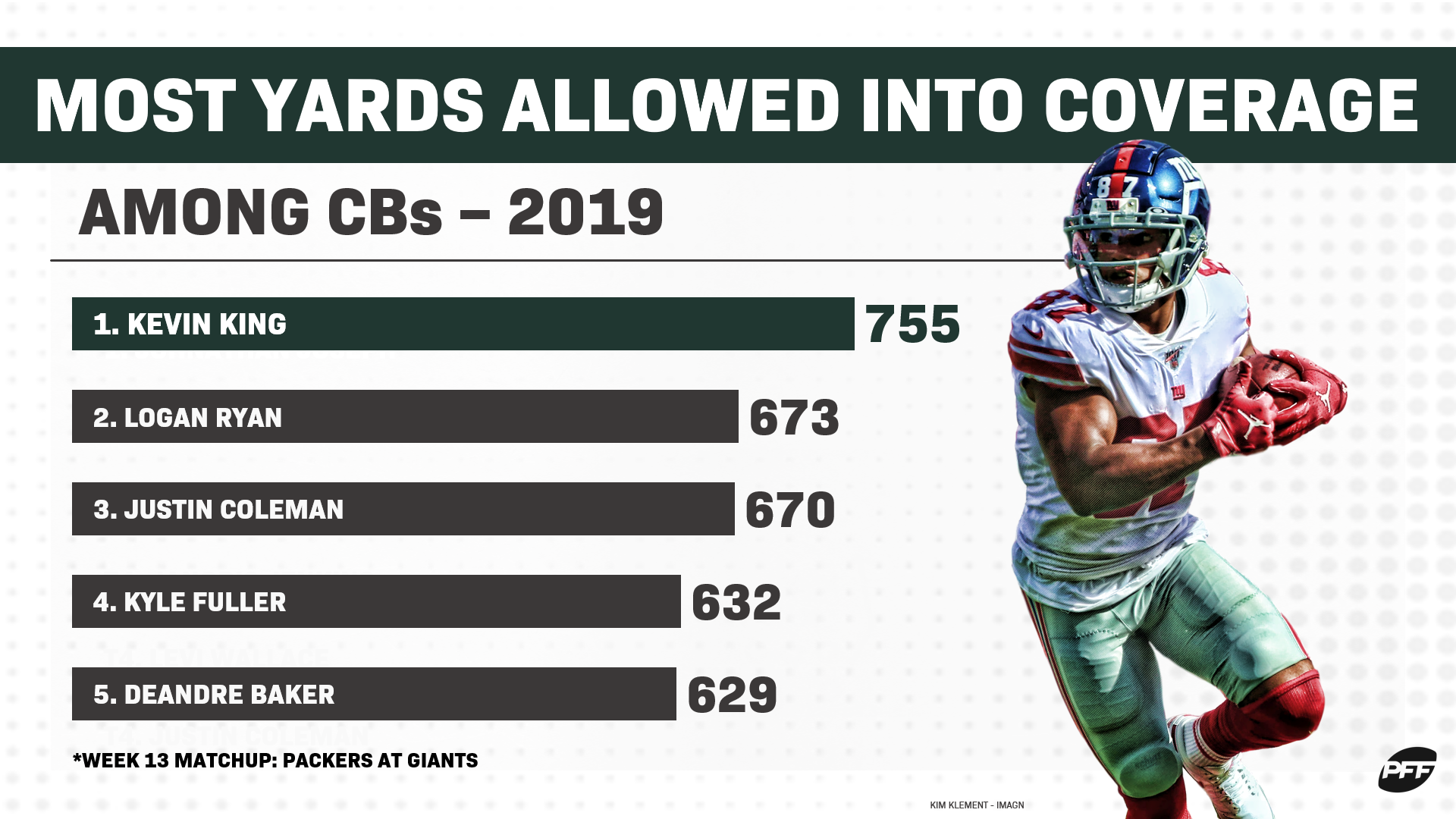 It was a quiet first game back from injury for Shepard, but he is set up perfectly for a bounceback spot against the Packers. By the numbers, you could not ask for a better matchup than this one against Kevin King, who has allowed the most receiving yards this year among CBs. Shepard has seen consistent volume this year, with nine targets in four out of the five games he has played, and should be leaned on again with Golden Tate and Evan Engram both in doubt for this week due to injuries. Adding to Shepard’s upside this week is a potential positive gamescript as the Giants are currently 6.5-point underdogs.

Waller has disappointed recently with his production, but he should have plenty of more opportunities this week. First off, the Raiders offense just lost Hunter Renfrow, who was shaping into a trustworthy intermediate option for Derek Carr. Before Renfrow was established with consistent snaps in the offense, Waller had high target volume with a 30% target share through three games. With Renfrow out and a game against the Chiefs where they are expected to trail a fair amount as 9.5-point underdogs, Waller has double-digit-target upside. Two of his best games this year came in positive gamescripts against the Packers and Vikings, where they got down big and Waller racked up 7/126/2 and 13/134, respectively.

Jones has been one of the toughest fantasy players to predict week to week this year, but he sets up very nicely against a Jaguars defense that has been run over recently. In the past two games, the Jaguars have allowed 416 rushing yards. Jones has had no issue scoring in recent games with a TD in three of his last four games, but the yardage has held back his fantasy ceiling. With how soft the Jaguars run defense has been, Jones could flirt with his season high of 80 rushing yards. Jones has also been more involved in the receiving game with 15 targets in his last three games.

Evans has been quiet in his last three games, but we have seen from the course of his career that he can explode any given week. This week especially presents itself as a game where Evans could be the one carrying the receiving load over Chris Godwin. Evans draws the more favorable matchup than Godwin as the Jaguars have allowed the seventh-fewest fantasy points to slot wide receivers. Evans is first in air yards among wide receivers and that volume gives him such a high ceiling if he and Winston connect on deep balls. This week is a great buy-low opportunity on a player who has shown upside of 35-plus fantasy points three times this year.

The touchdown juggernaut sets up in a bounceback spot against the Giants after a big struggle for the whole Packers offense this past week. Due potentially to a down game, Jones has dropped to the ninth-highest salary RB on DraftKings and should be popular there due to his monster performances of 40-plus fantasy points twice this year.

Jackson is on pace for a historic fantasy season. He is currently averaging 29.4 fantasy points per game and a matchup against the 49ers has caused his salary to drop some. This potential value on his salary should not have DFS players scared of the matchup and could even add ownership with it being easier to fit him in lineups. Jackson will likely be the highest-owned QB this week.

The Eagles wide receiver core has been a disaster in recent weeks. They had to bring in Jordan Matthews to try to steady the ship, but he was waived Monday after a performance to forget from the Eagles offense. The one positive for fantasy purposes in recent weeks has been Ertz. He has double-digit targets in the past three games and in those games is averaging 24.6 fantasy points. With so many question marks at tight end, Ertz looks to be the safest option and should be a top-three-owned tight end this week.

Chark was mostly a disappointment in Week 12, but a matchup against the Bucs secondary should allow people to forgive him quickly. The Buccaneers have allowed the most fantasy points to wide receivers, and the game currently has the third-highest over/under of 49 points. The Jaguars decided to lean on Leonard Fournette this past game with 33 touches, but the Bucs have one of the biggest funnel defenses to passing with their success against the run. Chark should be a popular option in the second tier of WRs this week.

Against the strong front seven of the Steelers, Chubb is tough to trust this week. He had a tough time getting any room just two weeks ago against this same Steelers defense, when he had 27 carries for 92 yards. That was tied for his second-worst game on a yards-per-carry basis. Our O-line/D-line matchup chart has this ranked as the third-worst matchup for the Browns O-line in the run game. The game also projects as a lower-scoring game with a current over/under of 39.5 points; Chubb is too expensive salary-wise to justify the matchup.

Jacobs has been one of the most gamescript-dependent fantasy running backs this season. He is averaging 20.5 fantasy points in games the Raiders have won and 9.1 per game in losses. When they get down in games, they have turned to Jalen Richard, the primary receiving back. That has led to Jacobs ranking 43rd in routes run among RBs on the season. That is three fewer than Ty Johnson, who opened the season as the third-string RB in Detroit. In a game where the Raiders project to get behind to the Chiefs, I am fading Jacobs.

Despite having a lot of weapons at their disposal, the Chargers offense has been really disappointing, mostly due to the struggles of the offensive line. With the line’s below-average play so far, we have the Broncos defensive line projected to have the highest pressure rate of any defense this week. When under pressure this year, Philip Rivers has a passer rating of 53.8 with four touchdowns to seven interceptions. With that said, the pass rush will limit the time for Allen to get open and will be especially difficult when he sees Chris Harris in coverage. Allen was only able to get 18 receiving yards in the first matchup against the Broncos and those struggles should continue in their second meeting.

After exploding out of the gates to start the 2019 season, it appears defenses have started to figure out how to neutralize Kupp. In his past three games, he has nine catches for 88 yards and no touchdowns. It has been against tough matchups in the Steelers, Bears and Ravens, but Kupp remains too highly priced considering how bad the Rams offense has been and looked. Kupp should have a better game here against the Cardinals, but his ceiling from the beginning of the season appears to be gone with him garnering the most attention on the Rams offense from the opposing defense. 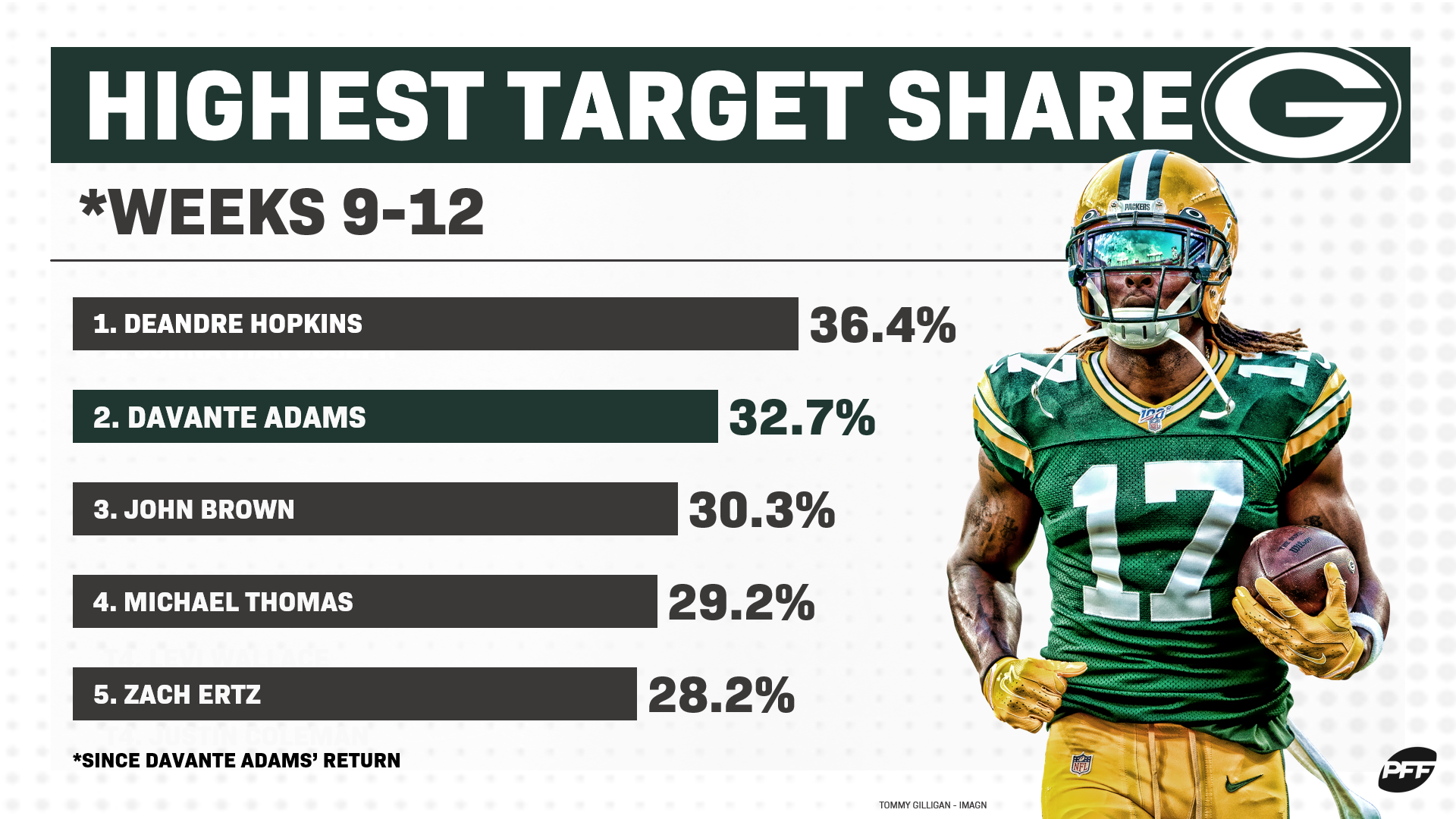 After six scoreless games, Adams was finally able to find the end zone Sunday against the 49ers. That was about the only positive you could take out of the game for the Packers offense as they could not get anything going, with more punting yards than total yards on offense. Since Adams has returned from injury, he has had a 33% target share. He now draws a great matchup against the Giants, who allow the second-most fantasy points per game to WRs. Adams will see Janoris Jenkins in coverage — our WR/CB matchup chart has Adams with the most favorable matchup this week at WR.

It remains to be seen if Howard will be able to play this week, but if he does, he has great potential value in a positive gamescript against the Dolphins. The Eagles are currently 9.5-point favorites, and with the injuries and struggles of the receiving core, the Eagles should play bully ball and run early and often here. Howard has been very effective in the red zone with seven rushing TDs and more scoring opportunities should present themselves against the Dolphins. Now if Howard is not able to play, Ajayi makes for a very interesting value play. He is priced as the bare minimum of $3,000 on DraftKings. He saw six carries this past week, but the Eagles offense could not move the ball in that game and there should be more sustained drives here. In a positive gamescript, Ajayi could see closer to 15 carries. Also, he does have the ability to see some goal-line work filling in Howard’s spot. The second half could be a lot of clock chewing for the Eagles offense and Ajayi would end up with some extra carries if the game shapes that way.