Each week in this space, using the information and data available to PFF subscribers, I’ll highlight the players in that week’s main slate that I think should be crossed off for that week, or at least used very sparingly. These are the Week 13 fades.

Mayfield’s stock is on the rise of late, the No. 6 fantasy quarterback over the last three weeks with a 7:1 TD:INT ratio in that span plus a rushing touchdown. And the Browns do have two games against the Bengals and one against the Cardinals over the season’s final four weeks. But this is not a good week for the Cleveland offense. Yes, Mayfield topped 20 fantasy points against the Steelers in Week 11. He’s also the only quarterback to do so since Week 2 (the pre-Minkah Fitzpatrick era), and he didn’t even throw for 200 yards in that game. The Steelers haven’t allowed a quarterback to top 200 yards with a single touchdown pass since Week 6. 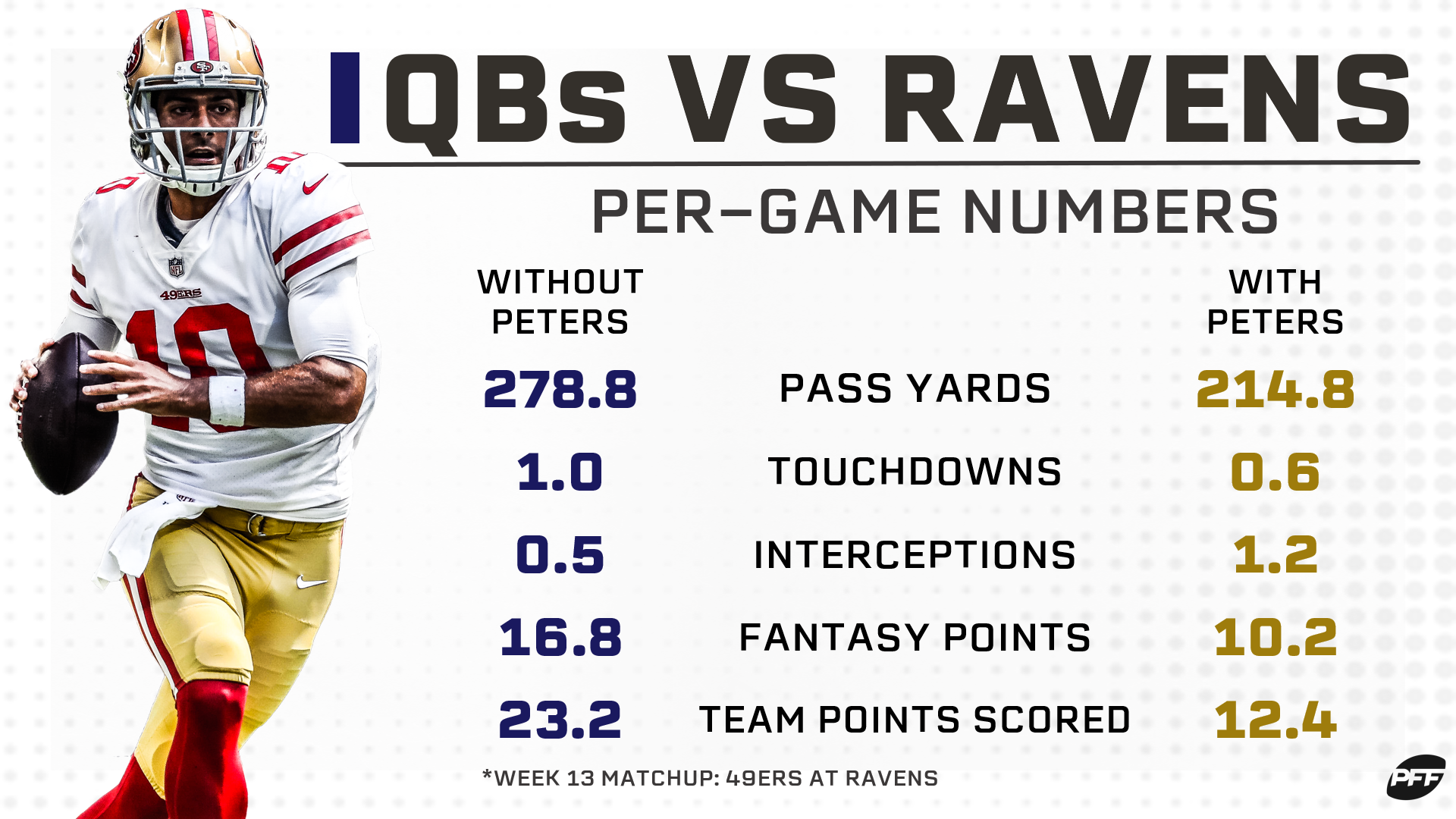 This week’s 49ers/Ravens game carries a healthy-if-not-daunting 45.5-point over/under. And the fear that Lamar Jackson will continue to do Lamar Jackson-y things could tempt DFS players to take Garoppolo in an expectation that he’ll have to throw a lot to keep up. That has not, however, been even close to the case for Ravens games of late. Since acquiring Marcus Peters, the Ravens have allowed 214.8 passing yards per game, with twice as many interceptions as touchdowns. Quarterbacks have produced only 10.2 fantasy points per game on them, and opposing teams have only produced 12.4 points — prior to Peters’ acquisition, those last two numbers were 16.8 and 23.3, respectively. Don’t bet on Garoppolo to be the one to break that.

Rivers have put up under 13 fantasy points in four straight games and six times in 11 games on the season, one of the worst stretches of his career — that’s 54.5% of this year’s games under 13 fantasy points, his most since his second year as a starter in 2007. It’s his third-worst passing grade (72.5) of the PFF era, and a big jump down from the 90.3 he posted last year. And this week he’s facing a Broncos defense that held him to only 4.1 points in Week 5.

If you want to make a case for using Fournette this week, it comes down to his receiving work. And that’s not a bad case — he’s averaged 7.0 receptions on 7.8 targets in his last four games. For a cash option, the fact that he is that involved in the receiving game and will get whatever rushing yards the Jaguars can manage against a tough Buccaneers run defense makes Fournette interesting. But if we’re talking tournaments, this is probably the lowest ceiling Fournette will have all season, and some reasonable contribution in the passing game just isn’t enough to overcome the problems on the ground.

Ingram has already tied his career-high with 12 touchdowns, and the Ravens have five games to go. He’s averaging the most yards per carry of his career and his most yards per reception since his 7-catch 2013. Any way you paint it, his debut in Baltimore has been a success. But the problem this week is that Ingram has been very touchdown-dependent this year; among 60 running backs with at least 50 PPR points, Ingram’s 39.0% of points scored on touchdowns is the highest in the league, just above Aaron Jones. And the 49ers have only allowed three touchdowns to running backs all year.

Coleman has been productive on a per-touch basis, but in a crowded San Francisco backfield, he hasn’t been getting as many touches as you’d like for a DFS tournament option. And with Matt Breida looking like he’ll be back on the field for Sunday’s game, we can expect his disappointing touch load to continue.

Mixon averaged 15.0 touches in Andy Dalton’s starts this year before his benching, then 22.0 in Ryan Finley’s three starts. The Bengals at large followed that trend as well, passing the ball 69.3% of the time with Dalton as signal-caller but 51.2% with Finley. And now Dalton is back under center. Combine that with the Jets’ league-leading 3.0 yards per carry allowed and there isn’t likely to be much room for Mixon this week.

Fading Rivers (above) likely means fading his top target as well, especially against a Broncos defense allowing the sixth-fewest PPR points per game to receivers but the 13th-most to tight ends. Allen had a season-low 18 yards against the Broncos the last time he faced them.

And opposite Allen in this game will be Sutton, who is likely to face similar struggles. Sutton did have 92 yards and a touchdown against the Broncos in that Week 5 game, but a big chunk of that was on a single 70-yard score against a safety who isn’t even playing anymore, and with Derwin James expected back this week, the Chargers pass defense should get even better. Add to that the fact that the Broncos appears to be moving to their third quarterback of the year — complete unknown quantity Drew Lock — and it’s hard to imagine trusting any part of this passing offense.

Our WR/CB matchup chart predicts shadow coverage for Kirk this week at the hands of Jalen Ramsey. Ramsey hasn’t been his best self this year, but he’s still a good corner, and in four games shadowing this year (between Jacksonville and Los Angeles), he’s held DeAndre Hopkins, Julio Jones, JuJu Smith-Schuster, and Allen Robinson to a total of 11 catches for 140 scoreless yards. That’s 6.3 PPR points per game in Ramsey’s coverage for four good receivers. 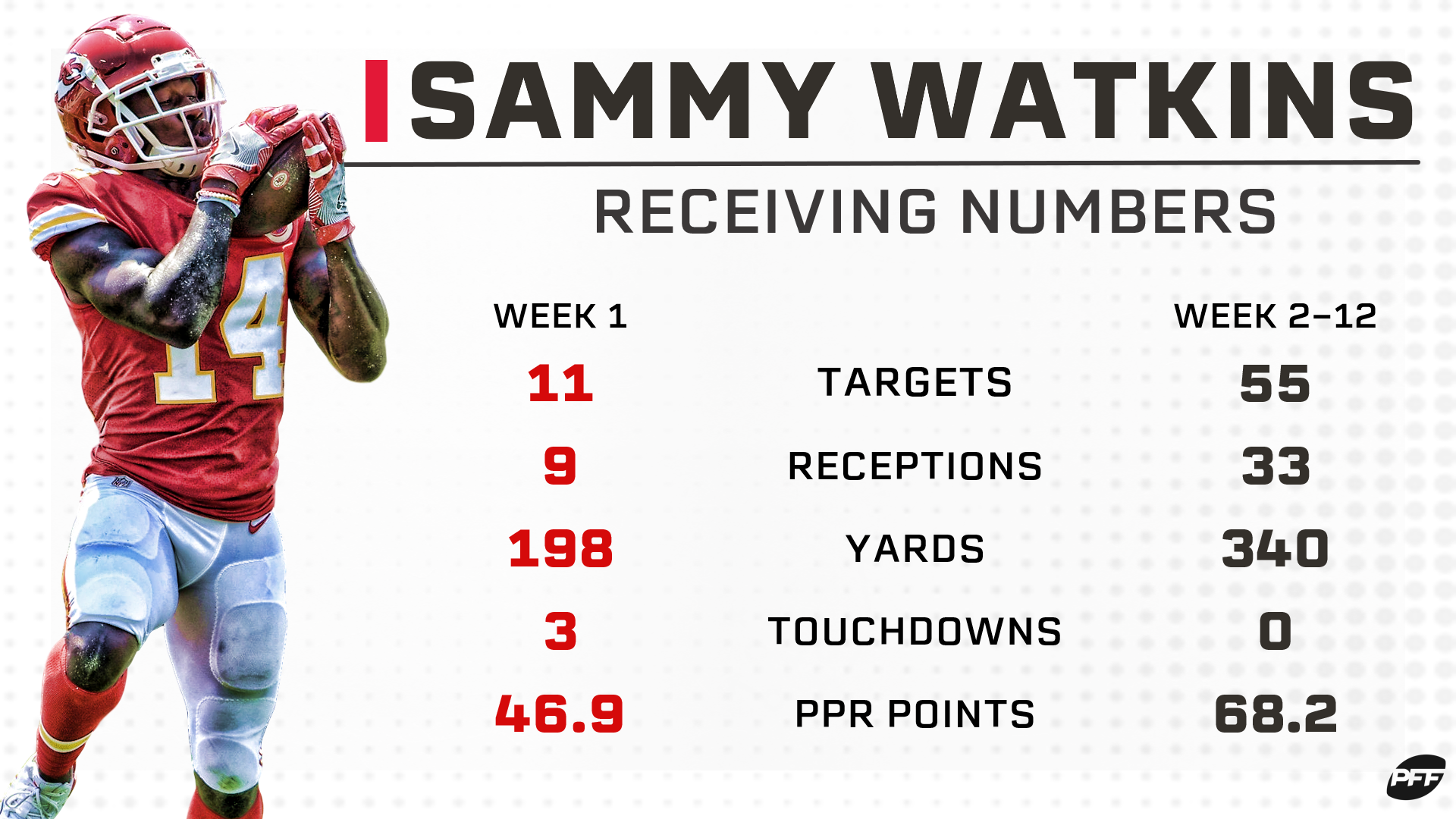 Watkins is far more name value than actual value at this point. He had that monster Week 1, with 3 touchdowns and 46.8 PPR points, and he’s been basically a non-factor since, with 0 touchdowns and 68.2 points (8.5 per game). Even against an Oakland defense allowing the 10th-most PPR points per game to receivers, that gave up 4 touchdowns to Patrick Mahomes in their last matchup, don’t fall into the Watkins trap.

The Ravens haven’t allowed more than 34 yards or 10.0 PPR points to a tight end since Ricky Seals-Jones since Week 4. And as mentioned above in the Garoppolo section, the pass defense as a whole has been incredible since acquiring Marcus Peters. As incredible as Kittle is, if you’re paying up at tight end this week, better to opt for a Zach Ertz or a Hunter Henry than this bad matchup.

McDonald averaged 30.5 receiving yards per game through Week 5 … and that average has plummeted since, believe it or not, averaging 16.5 yards in six games since. He hasn’t topped 40 yards in a game all year and has only 1 touchdown since Week 2. He had exactly 1 catch in Devlin Hodges’ first start, then had exactly 1 catch last week in Hodges’ second notable appearance. What are you even hoping for if you roster McDonald this week?