Dalvin Cook and Leonard Fournette: Which 2017 draftee has the higher fantasy stock?

The most controversial fantasy football article I’ve ever written (at the time of writing it, at least) was this one, arguing that Dalvin Cook was the superior prospect to Leonard Fournette coming out of the 2017 NFL Draft. While I feel vindicated in my assessment that Cook was the more efficient player, I’m not sure which running back is the more valuable player for 2019 fantasy drafts. Both have struggled with injuries and both have seen their ADPs drop considerably over the past 12 months.

Today, I wanted to examine the prospects of both players to see who is more deserving of a second-round pick.

The case for Dalvin Cook

Cook is currently a mid-second-round pick in fantasy drafts (RB11). After playing in just 15 games over the past two seasons, Cook’s injury risk is high — too high for some. However, if he can string together a healthy season in 2019, I’d bet he’d be an easy first-round pick in 2020.

Over the past two seasons, Cook averages 15.8 PPR points per game in games he was not on the injury report and didn’t leave early due to injury. That would have ranked 11th at the position last season. In these games, Cook played on 73% of the team’s snaps, while drawing 69% of the carries and 79% of the team’s targets out of the backfield. Those numbers would have ranked seventh, 11th and seventh best, respectively, last season. In essence, that’s a bell-cow workload, signifying a lack of gamescript-dependence (he can be started each week with confidence).

Not only was Cook terrific from a fantasy and usage standpoint, but he’s also been our single most efficient running back over this span. Over the past two seasons, Cook leads all running backs with at least 100 touches (97 qualifiers) in missed tackles forced per touch (0.25). 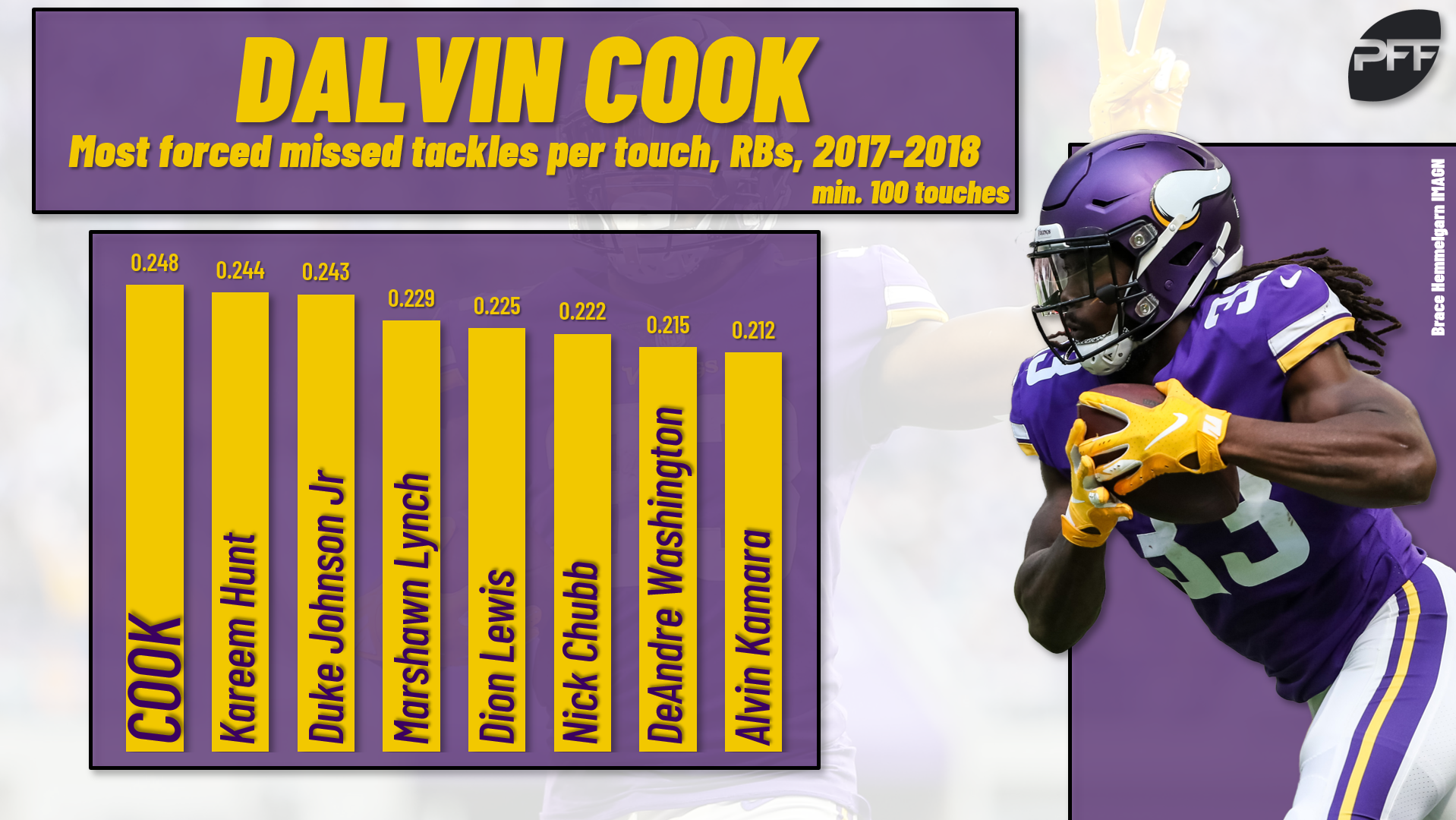 Cook might also benefit from the departure of Latavius Murray and the arrival of Gary Kubiak, who was recently added as the team's assistant head coach and offensive adviser. In 12 seasons as an offensive coordinator, Kubiak's offense has ranked top-five in rushing yards nine times and top-12 12 times. His teams have also ranked top-five in rushing touchdowns eight times. Alexander Mattison (the 102nd overall pick in the 2019 NFL Draft) will likely be asked to reprise Murray’s role in the offense but, as outlined earlier, it’s little more than a backup role, as Cook should continue to be used as the team’s bell cow for however long he remains healthy.

The case for Leonard Fournette

Whereas Cook has efficiency on his side, Fournette quite clearly does not. Among all 63 running backs with at least 150 carries over the past two seasons, Fournette ranks 48th in PFF run grade, 49th in yards per carry and 50th in yards after contact per attempt. Though Fournette has struggled with efficiency, he’s seen enough volume to make up for that, and his volume might only get better this year.

In his rookie season (including the postseason), Fournette ranked sixth in fantasy points per game (18.1) and third in touches per game (23.8). Looking at Fournette’s per-game output from last year, it looks as though he took a diminished role in the offense and suffered for fantasy because of it (15.1 fantasy points per game). Though that’s played a major role in Fournette’s plummeting ADP (RB15), it’s not entirely true.

Fournette played in only eight games last year but saw the field in only 26 (of a potential 32) quarters, due to ejection and injury. Once adjusted for that, it becomes clear Fournette saw little dropoff in usage or production, averaging 23.8 touches and 18.5 fantasy points per four quarters (well above Cook’s outputs). And his usage might be even better this year, following the departures of T.J. Yeldon, Carlos Hyde, Corey Grant, and Jamaal Charles.

Though Cook might still be the better player, I think (contrary to ADP) Fournette will have the better fantasy season. At the running back position, volume trumps efficiency, and Fournette should have Cook resoundingly beat in that department. That said, it’s close – I have Fournette ranked 11th among running backs (ADP RB15), while Cook ranks 12th (ADP RB11).