Who are the best fantasy football plays for building an optimal DFS lineup in Week 10 of the 2018 NFL season? As we do every Saturday, this piece brings you the DFS locks of the week.

Rivers has been my favorite quarterback all week, and I can’t get enough of his matchup against the Raiders, who have given up the most fantasy points per dropback against opposing quarterbacks this year. Rivers has been playing incredibly well — he has at least two touchdowns every game — and he’s too cheap in DFS given his matchup.

There is no running game in Tampa, the defense gives up a million points every week, and the pass-catching options are elite. That combination is a winning formula for DFS quarterbacks. FitzMagic saw a small but insignificant price bump and now draws a Redskins defense that has given up the 10th-most fantasy points this year.

Dalton and the Bengals play host to the New Orleans Saints in Week 10. The Saints have given up the second-most fantasy points per game to opposing quarterbacks this year, yielding 2,601 passing yards (fourth-most) and 18 touchdowns (tied for third most) while creating just four interceptions. 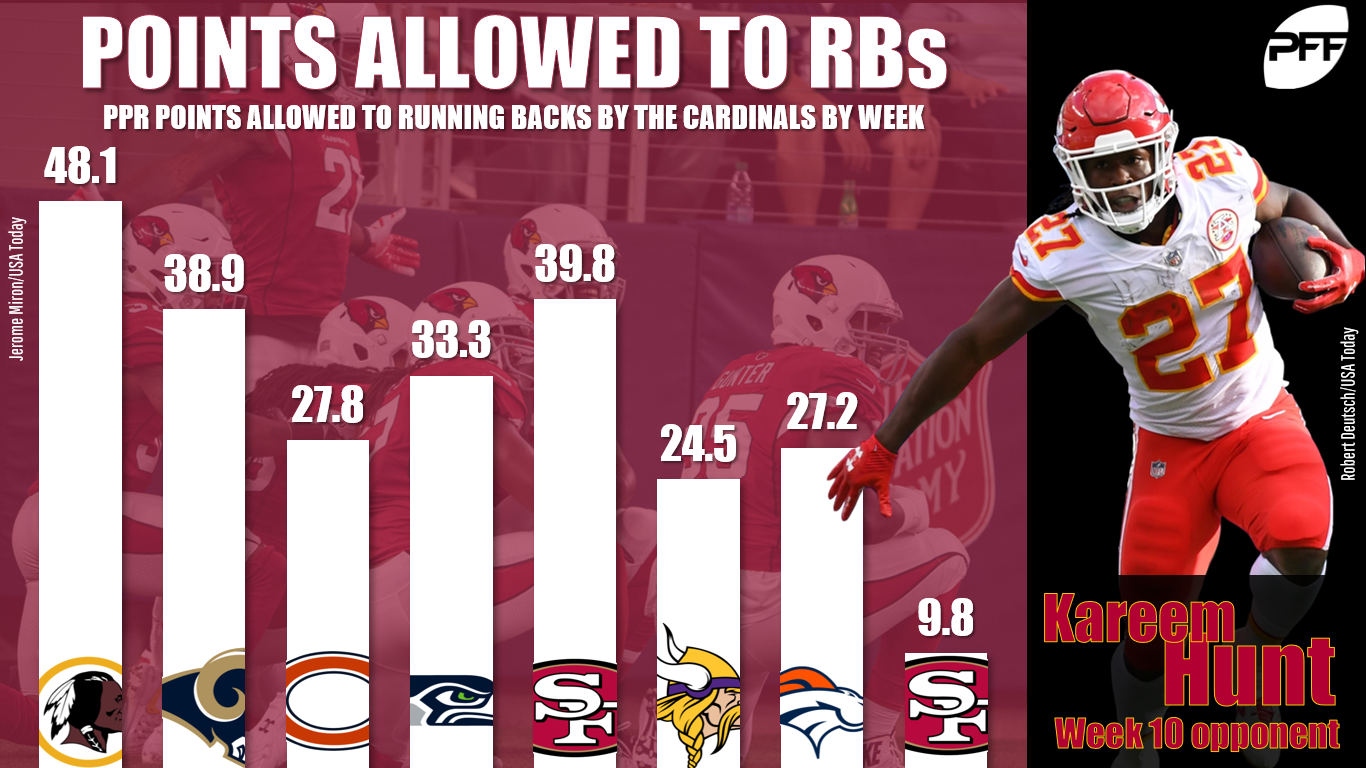 Hunt gets one of the best matchups in football as the Chiefs take on the Cardinals, who have given up the second-most fantasy points to running backs this year. Running backs average over 175 total yards and 1.5 touchdowns per game against Arizona.

Gordon will roll against the Raiders, who have given up the ninth-most fantasy points to opposing running backs on the year. The Chargers are massive 10-point favorites against Oakland, so look for Gordon to push for 20 touches this week (he’s averaging 17). Gordon has scored at least one touchdown in every game since Week 1.

Lewis is too cheap because he played on Monday night, after Week 10 pricing had already been released. Lewis has eclipsed 19 touches and 120 total yards in two straight games, and now he gets a Patriots defense that has allowed 538 receiving yards against from opposing running backs — second-most in the NFL.

Jones set season-highs in attempts (14) and targets (4) last week, and he should now routinely see 16-plus touches plus goal-line work every week with Ty Montgomery no longer around. Jones has a favorable Week 10 matchup against the Dolphins, who have given up the seventh-most fantasy points to running backs this year. The Packers are also 9.5-point home favorites, so don’t be surprised it Jones eclipses 20 touches.

With Hue Jackson and Todd Haley out of Cleveland, Johnson has finally been “infused” into the offense. Johnson tied a season-high with 29 pass routes last week, catching all nine passes thrown his way for 78 yards and two scores. Cleveland (6-point underdogs) will be playing catchup again in Week 10 against the Falcons, who have given up a league-high 68 receptions to opposing running backs.

Thomas, who is catching a stupid-high 89% of passes thrown his way, has the second-best individual WR/CB matchup of the week against a Bengals secondary that has given up the fifth-most fantasy points to opposing receivers this year, including 1,626 receiving yards (third-most in the NFL).

Despite the needed price bump, Boyd is still a great play in Week 10 against New Orleans’ whipping boy P.J. Williams. Boyd, who has dominated all year, gets a chance to be the primary threat in Week 10 with A.J. Green sidelined.

Evans draws a Redskins secondary that has given up an average of 211 receiving yards and 1.5 touchdowns per game to opposing receivers over the last six weeks. Considering that Evans has amassed a whopping 38 targets (nearly 10 per game) in the four games Fitzpatrick has started and finishes (27% team market share), I like his chances to doing damage in Week 10. 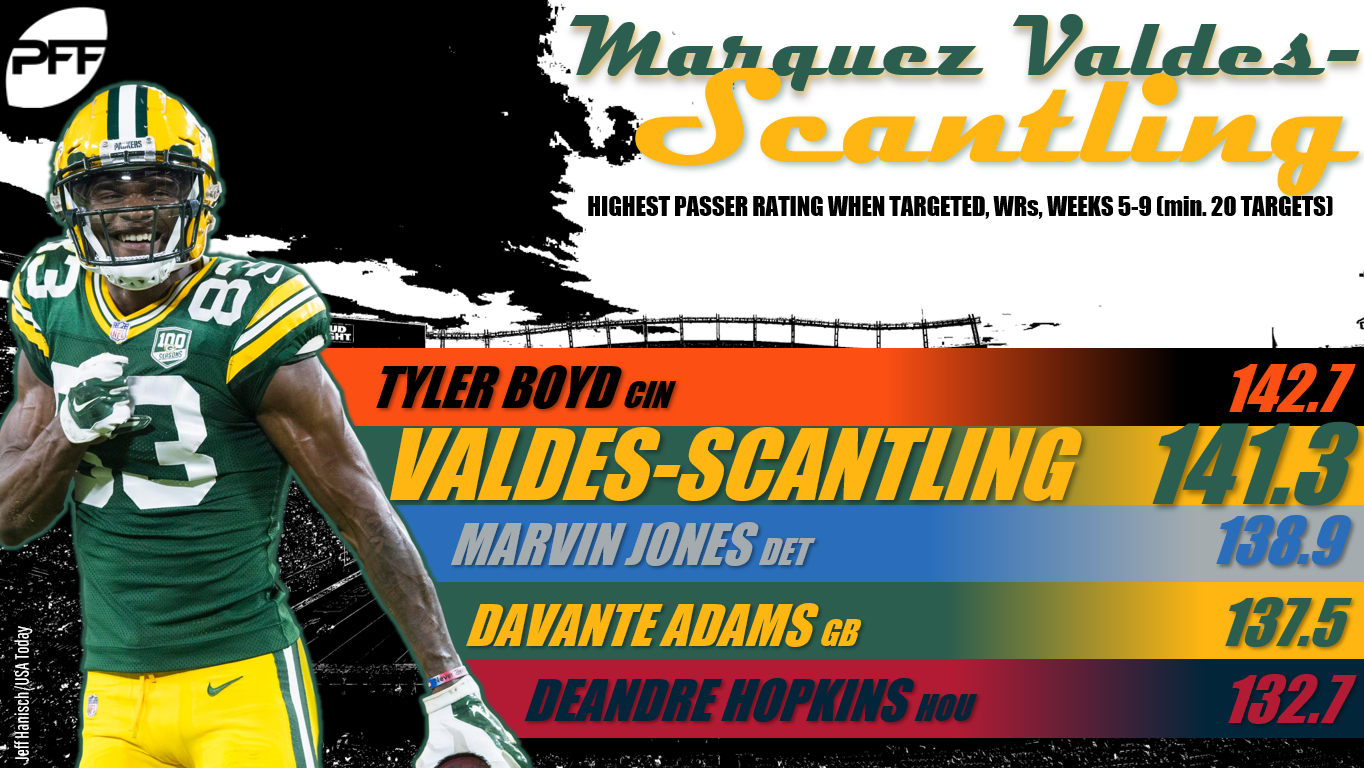 Aaron Rodgers has had a passer rating of 131.3 when targeting Valdes-Scantling this season, and that trust factor is only going to grow. With Davante Adams doing battle with Xavien Howard, MVS will be running free against Miami’s secondary.

Kelce is the surest bet on the DFS main slate this week. It’s not the world’s best matchup, but it doesn’t matter with this Chiefs offense. Kelce is rolling, with three touchdowns in his last two games. Kelce also has at least five receptions and at least 60 yards in every game since Week 1.

Graham, who found the end zone last week, takes on a Dolphins defense that has been struggling against tight ends over the last month. Miami has surrendered five touchdowns to tight ends in their last four games. Something to watch: Graham ran a season-high 21 routes lined up as a receiver last week. Green Bay may be looking for him to replace some of Allison’s production outside, which could lead to some big plays.

Hooper draws a Browns defense that has given up some big games to tight ends this year, including 11-133-2 to Oakland, 12-111-0 to Tampa Bay, and 7-99-2 to Kansas City just last week. Hooper isn’t just a touchdown-or-bust guy anymore, either. He has at least three receptions in all but one game this year, and he has at least 40 receiving yards in each of his last four. He’s also displayed a nice ceiling (relative to his DFS price), with double-digit targets in two of his last four games.