CHARLOTTE, NC - OCTOBER 10: Greg Olsen #88 of the Carolina Panthers dives out of bounds after a catch against the Tampa Bay Buccaneers in the 3rd quarter during the game at Bank of America Stadium on October 10, 2016 in Charlotte, North Carolina. (Photo by Grant Halverson/Getty Images)

All March long on Tuesdays and Thursdays we have looked at fantasy sleeper and bust candidates at each position. Now, we are finishing up our dive into the fantasy landscape at tight end. Earlier this week I examined some sleeper candidates at the position. Up next, let’s take a stab at some players that could disappoint.

Below are some of my tight end busts at this point of the offseason:

After playing in 16 games for nine straight seasons, injuries limited Olsen to just seven contests a year ago and even in some of those outings he was far from 100 percent. The veteran finished with only 17 catches on 34 targets for 191 yards and one touchdown.

Olsen did manage to have a couple strong performances late in the year, including catching eight balls for 107 yards and a score in a playoff loss to the Saints. However, if you take away that effort and his blowup in Week 15 (9-116-1) and he only mustered 15.5 PPR points in his other six games in 2017.

It appears he won’t need any follow up procedures on his broken foot this season, but the 33-year-old has some questions surrounding him heading toward 2018.

He reportedly auditioned for ESPN earlier in March, which has led some to speculate he’s considering retirement. Assuming he suits up in the season ahead and can stay healthy, Olsen should figure to remain one of Cam Newton’s most viable targets in the passing game. It’s still really hard to justify spending a fifth-round pick to secure his services.

Reed has teased us with his potential, but he continues to disappoint us with his durability. Unfortunately 2017 wasn’t much different. He missed large chunks of time in training camp with a toe injury and never seemed to reach full health.

He finished last season as fantasy’s TE43 after playing in just six games. Reed caught 27 of 33 targets for 211 yards and three touchdowns. Aside from his breakout campaign in 2015 the tight end has mostly proven unreliable, missing 28 games over five years in the league. He scored 11 times in 2015, but has just 11 total touchdowns throughout his other four seasons as a pro.

The injuries aren’t the only concerns with Reed for fantasy purposes heading into 2018. The Redskins have a ton of changes in store on offense, headlined by Alex Smith taking over at quarterback, and don’t have many weapons surrounding their new signal caller.

Washington really needs Reed to step up, but like fantasy owners the team likely is skeptical that he’ll be able to deliver. He’s sliding down draft boards, but even in the mid-rounds it’s hard to invest in a player with so much baggage.

Rather than be on the hook for $8.25 million in 2018 the Lions cut Ebron, who they selected with the 10th overall pick in the 2014 draft. He was quickly scooped up by the Colts and joins Jack Doyle on the depth chart. He is expected to be part of many multiple-TE sets with Frank Reich and Nick Sirianni now serving as the head coach and offensive coordinator in Indy.

Ebron had a nice stretch of games in 2017, but has mostly been a disappointment as a pro and a borderline starting fantasy option at best.

Through his first four years as a pro Ebron has only eclipsed 575 yards once and scored just 11 times while averaging 7.2 yards per target. He has 23 drops on 277 career targets.

The concerns looming around Andrew Luck’s shoulder coupled with all the holes on the Colts’ offensive depth chart makes it is hard to expect much from Ebron in the season ahead. He has been a popular late-round grab recently, but this year owners that opt to wait on a tight end will be wise to go in a different direction. 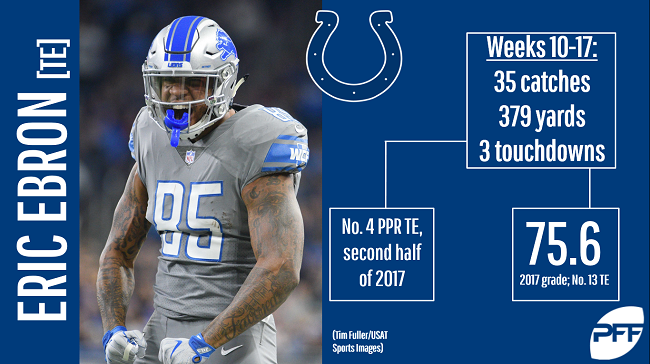 Witten continued to defy Father Time in 2017, his 15th year as pro, as he wound up ninth in PPR fantasy points among tight ends. The finish was more a reflection on how poor the production was at the position as a whole, rather than an indication of how Witten performed.

The veteran saw his numbers dip across board. One of the more concerning stats on the decline was his targets. After averaging 115.1 targets in the previous 10 seasons Witten saw a career-low 81 balls thrown his way in 2017. That led to the worst marks of his career in both receptions (63) and receiving yards (560).

Touchdowns have never been his mantra, but Witten scored five times a year ago. He’s only scored more touchdowns than that in a season three times during his entire career. Durability is also a plus with the long-time Cowboy. He hasn’t missed a game since his rookie season in 2003.

He will be 36 in May and after seeing such a dip in his production the wheels could come off in a hurry for Witten. In deeper leagues he will still be on the radar, but don’t overpay based off name recognition.

There will be some who will look to Hooper to be a post-hype sleeper in 2018. He entered last season with a ton of buzz and broke out of the gate fast with an 88-yard touchdown in Week 1, yet it was all downhill after that. He would go to only score two more times all season and didn’t eclipse 50 yards in another contest.

Hooper did finish third on the Falcons with 62 targets, but the team has so many weapons that he was the fifth or sixth option in the offense at best and the system doesn’t place a heavy emphasis on tight ends in the passing game.

He was one of only 12 tight ends in the league last year to play 75 percent or more of their team’s snaps and only three of those players finished with less fantasy points per opportunity than Hooper (0.31).

It will be a make-or-break campaign for Hooper in 2018, but given the fact that he’s outside of the top 20 in PFF’s early consensus ranking it appears unlikely Hooper will be much of a factor in most redraft leagues.

Check out the rest of the series: