Hello, and welcome to the Week 17 Actual Opportunity report. This is our weekly look at the players with the most fantasy potential based on volume, and how effective they’ve been with it. If you’re unfamiliar with Actual Opportunity, you can read the in-depth explanation here.

After 16 weeks of action, here are the top 30 players in expected fantasy points per game: 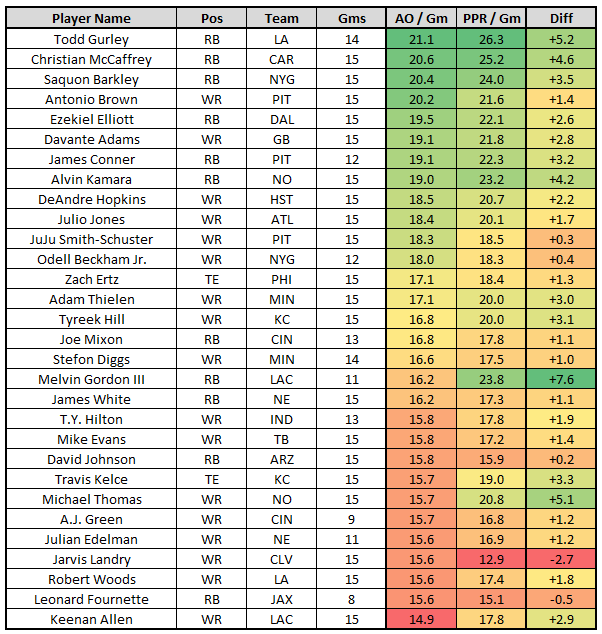 It’s Week 17, which means if you’re reading this article, it’s probably only because you’re doing DFS research. So, of course, this week’s article will be more DFS focused. Week 17 is always my favorite DFS week of the season. There are more variables at play, but typically, you’re rewarded more for your research this week than at any other point in the season (preseason DFS excluded).

The majority of teams this week have nothing to play for. 13 teams are still trying to make their way into the playoffs or earn a better playoff seed. Those teams are the Chiefs, Chargers, Patriots, Texans, Titans, Colts, Ravens, Steelers, Rams, Bears, Seahawks, Vikings, and Eagles. (This may be subject to change for some of the teams playing in the later games.) For the most part, we can expect these teams to play their hardest and not bench their top players. The Cowboys are locked into their seed, but reportedly will not be resting their starters. A team like the Panthers, meanwhile, the playing in a meaningless game where a victory only leads to a worse draft spot, so giving Christian McCaffrey (for example) his typical workload (100% of the snaps) doesn’t make a lot of sense. If we get word he'll be benched, this could make Cameron Artis-Payne or Kenjon Barber a top value.

The running back position is usually where the most value is in Week 17. A team will want to get a better look at a backup running back, or due to having one less option on their roster, a backup will come in on fresh legs and receive a bell cow workload at a near-minimum price-tag. For instance, in 2017, backups Orleans Darkwa, Kapri Bibbs, and Alfred Blue all finished as top-15 fantasy running backs. In 2016, backups Charcandrick West, Rex Burkhead (then with Cincinnati), and Shaun Draughn all finished as top-five fantasy running backs.

Make sure you’re keeping an eye on news throughout the week to get a better sense of who to target and who to avoid.