MIAMI GARDENS, FL - SEPTEMBER 07: Rob Gronkowski #87 of the New England Patriots celebrates his second quarter touchdown on a pass from Tom Brady #12 as teammate Danny Amendola #80 looks on during a game against the Miami Dolphins at Sun Life Stadium on September 7, 2014 in Miami Gardens, Florida. (Photo by Mike Ehrmann/Getty Images)

We’ve reached the finale of the breakdown of my new metric, “Actual Opportunity,” the introduction to which you can find here. I highly suggest reading this before delving any deeper here. You can also find my writeup on running backs here and wide receivers here.

In this article, I will be taking an in-depth look at the tight end position through the lens of this metric.

It was a rough year for fantasy tight ends. TE1 (top-12 fantasy tight end) production dropped off by 248 points (roughly 11 percent) last season. Travis Kelce led the position in fantasy points, but his fantasy point per game average (13.9) would have ranked a lowly seventh-best just a season ago. Last year, no tight end hauled in more than eight touchdown passes, although at least three eclipsed that number in each of the past four seasons. Rob Gronkowski seeing a career-low in snaps obviously hurt the position as a whole, and we’ll touch on his significance in a moment.

See below for a list of the tight ends who ranked top 15 from an Actual Opportunity per-game basis.

Rob Gronkowski — Gronkowski failed to crack the top-15 this season, finishing a lowly 20th-best in terms of Actual Opportunity per game. This is a major departure for him, after ranking top-four at the position in each of the prior five seasons (and first in two of the previous three seasons). Still, he was hyper-efficient, leading the position in fantasy points per game over his Actual Opportunity score per game (+3.6). Though he didn’t have enough targets to qualify this season, since joining the league, Gronkowski has two of the top-three and five of the top-15 seasons by the same metric. Gronkowski is one of those rare players that when building out your projections, you need to adjust for his historic levels of efficiency.

Since 2011, this was the first year Gronkowski failed to finish among the top-two tight ends from a fantasy-point-per-game basis. Gronkowski is at disadvantage here, however, considering we’re looking at per-game numbers. Due to injury-related issues, Gronkowski didn’t start in Weeks 3 and 4, and he played just seven snaps in Week 12. If we exclude these weeks, he would have lapped all tight ends in fantasy points per game by +4.8.

Since 2011, Gronkowski has finished as a top-six fantasy tight end in 60 percent of his games and a top-12 tight end in 79 percent of his games. This leads every player at every position over this span. Among tight ends, that’s 17 percent and 13 percent over the next-closest player (Jimmy Graham). There’s no doubt Gronkowski’s inability to stay healthy is a major concern, but in terms of advantage gained when on the field, no one comes close.

Greg Olsen – Olsen led all tight ends in air yards per game (90.0), with 22.0 air yards per game over the next-closest tight end, Gronkowski. He ranked third among tight ends in air yards per game in 2015. Olsen’s 21 deep targets (targets traveling 20 yards or more down the field) in 2016 ranked first at the position by six, and 21st among all receivers. Olsen also ranked first in targets per game and end zone targets per game, enough to push him to the top of our list, after finishing fifth in 2015. He was, however, grossly inefficient this season, ranking sixth-worst in per-target efficiency (fantasy points per target over Actual Opportunity per target) among all tight ends with at least 50 targets. This is a major departure for Olsen, considering he finished fifth- and 12th-best in this statistic over the previous two seasons, respectively. I’m mostly blaming this on Cam Newton’s partially torn rotator cuff. From Week 10 until the end of the regular season, only Jared Goff posted a worse passer rating than Newton's 68.5. On the back of improved quarterback play from a healthy Newton, I’m expecting some positive regression for Olsen in 2017, and have no problem taking him as high as the third or fourth tight end off the board when drafting.

Kyle Rudolph — Rudolph quietly finished as fantasy’s second-highest-scoring tight end in 2016, after finishing 15th the previous season. Rudolph finished second in targets per game, third in targets inside the 10-yard line per game, and first in targets inside the 20-yard line per game. In terms of target market share, he ranked first among all receivers in end-zone targets and targets inside the 10- and 20-yard lines. Minnesota posted the NFL’s fourth-worst red-zone touchdown rate last season, and due to some natural regression, he should get a little bit luckier in the touchdown department next season. Rudolph should also continue to be one of Sam Bradford’s favorite check-down targets, and rack up easy points in PPR leagues. He remains a strong value, typically being drafted in the seventh round of fantasy drafts.

Martellus Bennett – Bennett was surprisingly efficient in 2016. On a per-target basis, this was the fifth-most-efficient season we’ve seen from a tight end this past decade. Bennett led the league in yards after the catch per reception (by nearly two yards over his prior career average) and converted five of his eight end-zone targets into touchdowns, the fourth-best rate among all receivers. Of course, much of this has to do with being tied to the eternally efficient New England offense, but in Green Bay he’s in line for a bigger opportunity while catching passes from an equally capable quarterback. At ADP (TE11), I’m typically avoiding him, however, considering over the last 10 seasons only twice has a Green Bay tight end finished among the top-10 at the position.

Travis Kelce – Despite finishing first in total fantasy points in 2016, Kelce ranked a lowly eighth in Actual Opportunity per game. In 2015, Kelce ranked 12th among tight ends in Actual Opportunity per game. At surface-level, this would appear to be a concern, but Kelce – like Gronkowski – is a player where we need to account for his historic levels of efficiency as a receiver. His near-end-zone usage and touchdown-upside has been low throughout his career (never scoring more than five touchdowns in any season), but he has made up for it in other ways, ranking second, 11th, and fifth in per-target efficiency over the past three seasons. Among all receivers with at least 100 targets in a season this past decade, Kelce’s 2015 and 2016 seasons both rank top-five in yards after the catch per reception. I’m predicting an increase in opportunity this season (following wide receiver Jeremy Maclin’s departure to Baltimore), and feel great selecting him as the third or fourth tight end off the board in PPR leagues. 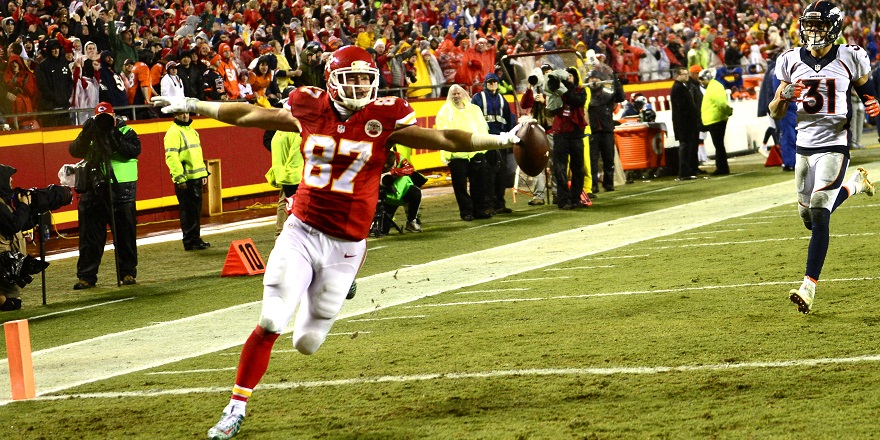 Tyler Eifert – After dealing with knee, back, and ankle injuries throughout the 2016 season, Eifert finished 18th in Actual Opportunity per game after ranking 15th in 2015. Though he continued to see valuable targets, his target totals were underwhelming, ranking just 20th per game. He did, however, rank first in targets inside the 10-yard line per game (fourth among all receivers) and first in end-zone targets per game. On a per-target basis, his 2015 season is the fourth-most-efficient season by a tight end this decade, and he ranked fourth-best at the position in 2016. It’s hard to tell how much of his low target volume is related to injuries, but he is a player who sees valuable targets and performs well on those targets. He’s someone I’m looking to buy-low on this season due to his elite upside and historic levels of efficiency, but will be looking to pair him with a valuable back-up given injury concerns.

Zach Ertz – Ertz quietly posted his second straight season ranking top-six at the position in Actual Opportunity per game in 2016. Ertz finished third among tight ends from a fantasy-point-per-game basis, and only 0.67 fantasy points per game behind Kelce. He scored just nine total points below expectation in 2015 and seven total points above expectation in 2016. From these (almost perfectly) average efficiency numbers, we might assume Ertz lacks upside as a receiver and is wholly volume dependent. After the Eagles added Alshon Jeffery and Torrey Smith in free agency, and likely less volume next season, Ertz appears to be an obvious regression candidate for 2017.

Hunter Henry and Antonio Gates — In 2016, Gates ranked seventh in targets per game and Henry 38th. Henry, however, paced Gates in efficiency and matched him in value of targets. Henry ranked behind only Bennett at the position in per-target efficiency, while Gates was below average. Among all tight ends, Gates ranked seventh in targets inside the 10, third in targets inside the 20, and eighth in end-zone targets per game. Henry ranked eighth in targets inside the 10, fourth in targets inside the 20, and third in end-zone targets per game. This isn’t really surprising either, as 32 percent of Rivers’ red-zone targets over the past five seasons have been directed toward tight ends – which ranks highest in the league by a significant margin. Henry just posted the 13th-best fantasy season by a rookie tight end all-time, and should see targets tilt more toward his favor in 2017. While both likely benefited from injuries to Keenan Allen, Danny Woodhead, and Stevie Johnson, there’s still enough value here for both tight ends to remain fantasy viable. Plus, if there is a serious injury to Gates or Henry, the other tight end could have league-winning potential.

Other – Jimmy Graham ranked 12th in targets per game, but saw only two targets inside the 10-yard line all season. For perspective, 32 tight ends saw more targets inside the 10-yard-line per game last season. This weighs heavy on his only 11th-best Actual Opportunity per-game ranking. … Jared Cook posted some monster stat lines in the postseason this year, but was highly inefficient during the regular season. He ranked third-worst in per target efficiency this season, after ranking worst overall and fifth-worst the previous two seasons. Due to his historic levels of inefficiency, he’s not someone I’m looking to target in drafts, despite the seemingly favorable landing spot in Oakland. … Jordan Reed ranked fifth-best in Actual Opportunity per game this season, after ranking second-best last season. Like Gronkowski, he’s another consistently hyper-efficient tight end, ranking fourth- and third-best in per target efficiency in each of the last two seasons, but he too has significant injury concerns. Still, as I’ve written elsewhere, he’s one of my favorite targets at current ADP. … Coby Fleener was the only New Orleans receiver (of six) to see at least 50 targets and perform below expectation on a per-target basis. This was his fourth season over the past five years he ranked bottom-10 among tight ends in per-target efficiency. And somehow, I’m sure you’re not surprised. He’s not on my radar as a post-hype sleeper.