With the third pick of the second round, the New York Jets Jets landed the most well-rounded back in the 2022 NFL draft class in Breece Hall.

The former Iowa State back recorded 82 receptions over his college career. He profiles particularly well in the passing game, making him the consensus No. 1 selection in most dynasty rookie drafts.

The production profile alone is impressive, but after accounting for Hall’s tremendous combine performance (4.39-second 40-yard dash at 217 pounds) and his draft capital, he compares similarly to backs previously taken in the top 10 picks of the NFL draft, players like Dalvin Cook and Marshawn Lynch.

Hall’s 40-yard dash time didn’t show up in his explosive-rush rate (10-plus yard attempts), which was average (14%) compared to his collegiate peers. However, his tackles avoided per attempt (27%) was four percentage points above the NCAA average over his career.

The former Cyclone was electric on outside-zone rushes, registering 4.1 yards after contact, a 36% forced missed tackle rate and a 21% explosive rush rate. The Jets ran the eighth-most outside zone in the NFL (39%) in 2021. He was less impressive on inside-zone and gap concepts.

The Jets trailed by four or more points at the fourth-highest rate in the league last season (54%), which led to a lot of passing (66% dropback rate). However, they favored the run on 44% of plays within three points, three percentage points above the NFL average.

Mike LaFleur hales from the 49ers coaching tree under Kyle Shanahan, so we could see more running this season. Still, it is tough to envision a big swing given New York's projected 5.5 wins at Draftkings. 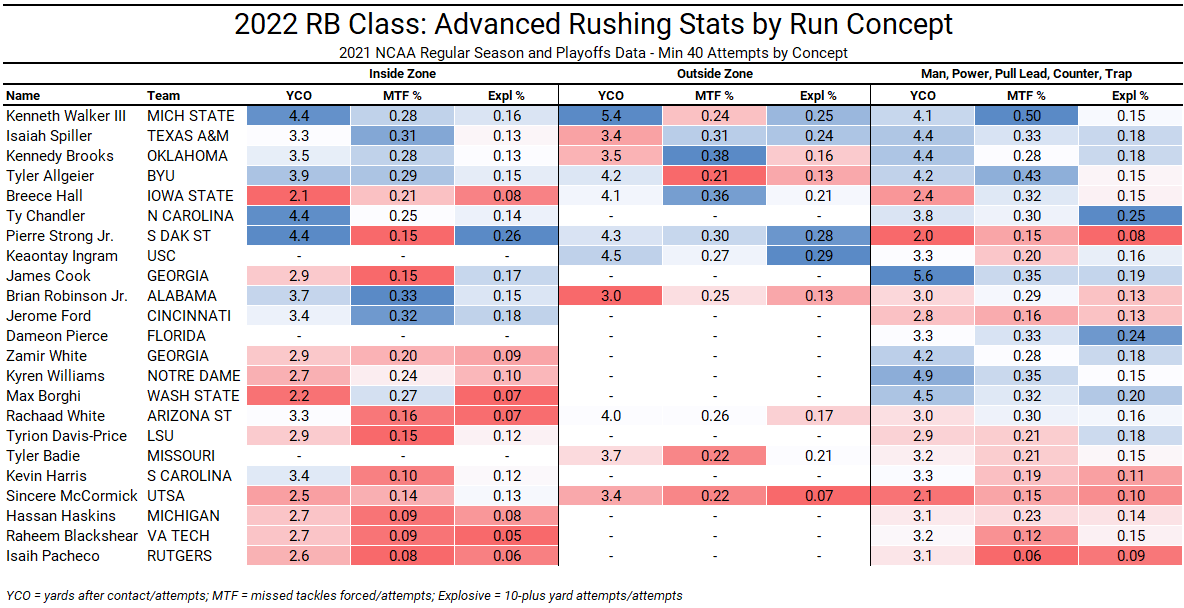 Michael Carter was borderline elite as a receiver out of the backfield with TPRR (23%) and YPRR (1.48) marks just below Alvin Kamara territory. However, the early-round draft capital versus the fourth spent on Carter in 2021 means a path to an every-down role is there for the taking.

Bottom Line: Hall is an upside RB2 this season in redraft thanks to his every-down profile. In the best-case scenario, Hall takes over 60-65% of the backfield snaps across all situations. The worst-case scenario would be Hall in an early-down role on a losing team with Carter soaking up passing-down work.