Ranking the DI prospects for the 2018 NFL Draft

The 2018 defensive interior class is decidedly top-heavy. Maurice Hurst and Vita Vea have separated themselves in a big way grade-wise from the rest of the defensive tackles in this draft, but that’s not to say there’s no talent to be had in the rest of the class.

Rather, Hurst and Vea are just that good.

[Editor's note: These rankings were originally posted on February 28, edited on April 9 following the 2018 NFL Scouting Combine and various pro day workouts, these rankings have evolved one final time on April 23 as we are just days away from the 2018 NFL Draft.] 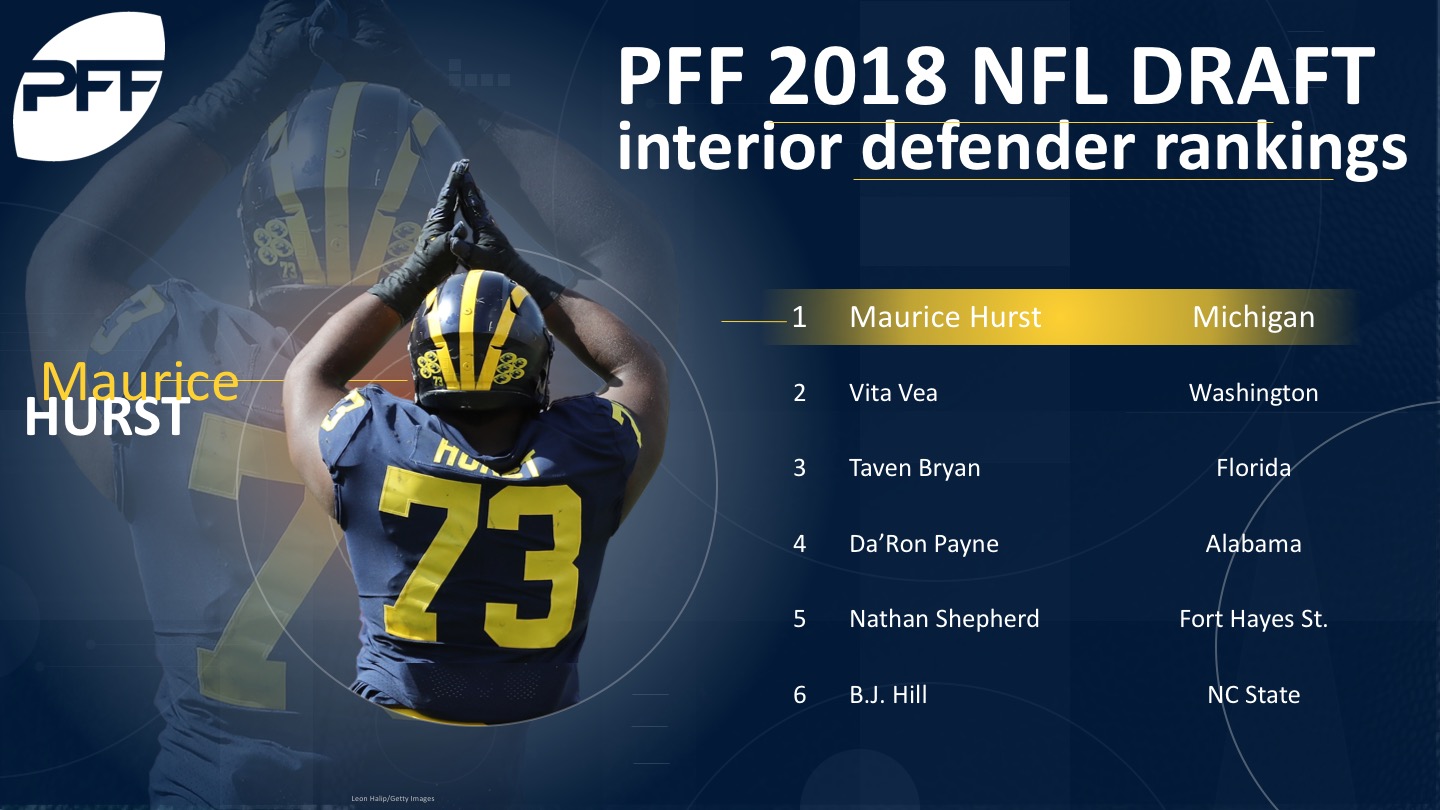 Payne showed a complete different gear against Georgia in the National Championship game where he set career highs for pressures (seven) and run stops (six). That high-end is encouraging, but it was shown too infrequently to be on the level of Hurst and Vea.

Shepherd's blend of size, power and athleticism is rare. His competition is obviously a concern, but looked like he belonged in his limited time at the Senior Bowl.

Hill dominated the Senior Bowl 1-on-1 unlike any other defensive tackle in Mobile. He won 73 percent of his reps that week, but unfortunately, that same dominance was rare in NC State's actual games.

Settle is a ball of power at this point, he’s unrefined and out of control at times, but you can’t teach 330-plus pound men to move the way that he does. As a redshirt sophomore, Settle has two years of solid grades under his belt.

McIntosh created havoc on one of the most consistent bases of anyone in this class. His tape against the Wisconsin offensive line in Miami’s bowl game though is concerning as was the lowest-graded game of his career, against top caliber offensive linemen.

No one was more productive against the run than Phillips last season. He notched 48 run stops, but his 33 total pressures were concerningly low.

Nnadi is a nose tackle in a 3-techniques body. With a little more beef, he could easily hold up at the nose full-time. He’s a difficult man to out-leverage and has a history of being stout in run defense.

Hall is an athletic freak who is as raw as can be. In a weak defensive line class, however, that athleticism will be coveted.

Thompson never could quite stay healthy at Georgia, but when he was, he flashed more than his fair share of ‘wow’ reps. Thompson can make plays on the opposite side of the line of scrimmage that few in this class are capable of.

Green was likely out of position as a 3-technique at USC this past season. When given a chance to play on the edge though, he flashed the explosiveness to be a consistent pocket-pusher.

Holmes wasn't the biggest name on the Ohio State defensive front this past season, but was still very productive. His best role in the NFL could be as a base end that kicks inside on third downs.

Senat is one of the stoutest run defenders in this class. He compliments that with a pass-rushing motor that won't quit.

Brown was inconsistent over his career at Virginia though he flashed some impressive reps as a pass-rusher. He has tweener size that make him a difficult projection in the NFL.

Fatukasi was a run-stuffing nightmare from the moment he stepped on campus at Connecticut. Unfortunately, his pass-rushing never quite matched his run-stuffing prowess.

Geary was the third-highest graded interior lineman in the country a season ago. He's extremely limited athletically though and measured in under 6-foot.

Perry was the fourth-highest graded interior defender in the country last year.

A former top recruit, Hand never truly lived up to the hype on the field, never topping a 77.3 overall grade. He's solid against the run, but his 71.2 pass-rush grade in 2016 represents a career high.

It's all about disrupting the run game for Ford who posted back-to-back run grades of 88.8 in 2016 and 88.4 last season. He can move blockers in 1-on-1 situations, though he provides little pass-rush as his career-high grade was only 71.7 back in 2016.

Speaks is an undersized defensive tackle who may not have a position at the next level. Still, he's very athhletic for his size and ranked fifth among interior defenders in pass-rush productivity last year.

Sims has excellent production on only 733 career snaps, and he's a sleeper to watch in this draft. He finished with 16 sacks, 10 QB hits and 47 hurries on only 421 career rushes.

Osborne had a breakout 2017 season, doing his best work in the run game where he finished with an 84.7 grade. He has room to improve as a pass-rusher after picking up six sacks, nine QB hits and 11 hurries on 309 rushes.

[Editor's note: These rankings are ever-evolving as we head toward the draft.]