2020 NFL Draft: Top 10 drafts according to the PFF draft board

One of my favorite new additions to the PFF Draft Guide this year was the draft capital ranks and five-year allocation charts. This was based on a study our analytics team did to properly evaluate how much each pick is worth historically in terms of expected wins above replacement (WAR). 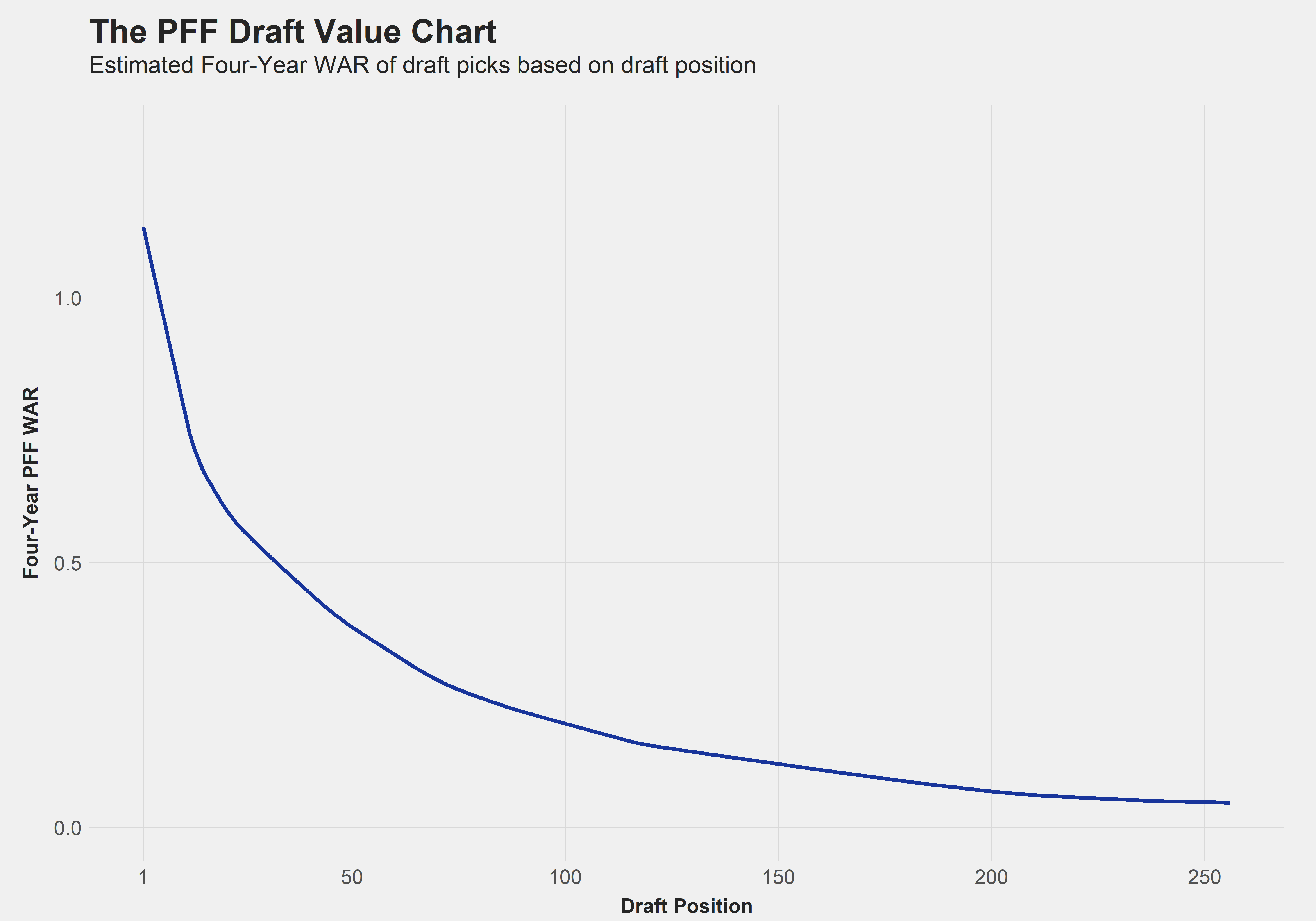 This gives a great snapshot into how teams have used their draft picks in the past, as with the San Francisco 49ers’ heavy investment into their defensive line, seen below.

So what I did was use that same pick valuation method and apply it to the PFF NFL Draft Big Board to see which teams got the most surplus-value for their picks according to our board.

For example, when the Miami Dolphins drafted Tua Tagovailoa — our second overall player — at pick No. 5, we saw massive surplus-value added despite being only a few slots away, with the No. 2 spot worth 1.10 WAR and the No. 5 spot worth 0.99. On the other hand, when they drafted Austin Jackson — PFF’s 94th-ranked player — at pick No. 18, we saw it as one of the biggest losses of value in the draft, with the 18th pick worth 0.63 WAR and the 94th worth only 0.21.

With the valuation method out of the way, let’s get to the teams that added the most value, according to the PFF Draft Big Board.

Note: We regressed our board value to the draft slot to lessen the impact of minor differences at the top of our draft board and players who fell drastically for unkown circumstances.

Everyone and their mother is raving about the Cowboys’ draft this year, and it’s easy to see why. Their first three picks of CeeDee Lamb (sixth on PFF’s board), Trevon Diggs (31st) and Neville Gallimore (51st) all offered great surplus-value according to the PFF draft board. It didn’t stop there, though, as their selection of Tyler Biadasz in the fourth round represented 0.1 WAR over expectation as the 87th player on our board heading in.

The Browns exited the first three rounds as the only team to have taken three players in the top-25 on PFF’s draft board. Missouri defensive tackle Jordan Elliott was one of the biggest steals of the draft, as he ranked 23rd on our draft board and was selected with pick No. 88. That represented a surplus-value of 0.35 WAR over expectation.

Not many are talking about the Bills as “winners” because they didn’t have a ton of picks. But for the most part, we saw the guys they did take as great value adds. Iowa defensive end A.J. Epenesa was the 20th-ranked player on PFF’s draft board, and they nabbed him at 54th overall (0.25 WAR over expectation). They also had one of the biggest late-round steals of the draft when they found our 69th-ranked player, Georgia quarterback Jake Fromm, all the way down at pick 167 (0.18 WAR over expectation).

We loved the Broncos’ draft not only because of the surplus-value they added but also because the positions they drafted early — wide receiver and cornerback — are two of the most valuable positions in the NFL (although position drafted wasn’t taken into account for this analysis). We saw both of the Broncos’ first two picks going higher than they actually did, with Jerry Jeudy ranked fifth on our draft board and K.J. Hamler ranked 41st.

Surprising? While their first two picks have been widely panned, we expected both Jalen Reagor and Jalen Hurts to be picked around the same place they actually were. The Eagles end up here not because of them but because of their work on Day 3. They quite easily added the most surplus-value on that day of anyone in the draft. K’Von Wallace (pick 127, PFF rank 60), Jack Driscoll (pick 145, PFF rank 78) and John Hightower (pick 168, PFF rank 101) were three of the biggest steals in the draft, per our board.

This one comes off the back of the single biggest steal of the draft according to the pick-value chart. Selecting Houston offensive tackle Josh Jones — the 14th-ranked player on PFF’s draft board — all the way down at 72 overall gave the Cardinals a surplus-value of 0.42 four-year WAR — and that’s like stealing the 43rd overall pick. That’s a massive win for a Cardinals team that’s just desperate for offensive line help.

The Bucs’ red-hot offseason continues. We saw their first-round pick — Iowa tackle Tristan Wirfs — as good value, but the biggest steal here was their fifth-round wide receiver, Tyler Johnson. The Minnesota wide receiver ranked 48th on PFF’s draft board heading in, yet he fell into the Bucs’ lap at 161 overall. The 0.28 surplus WAR generated from that pick is worth as much as the 69th pick in the draft.

The Lions had quite easily our favorite third round of any team in the entire draft. Getting Notre Dame edge defender Julian Okwara (PFF rank 28) at pick 67 and Ohio State guard Jonah Jackson (PFF rank 40) at pick 75 were both massive steals compared to our board. Those picks netted Detroit a combined 0.42 WAR over expectation.

With approximately a zillion picks in the draft by the time it was all said and done, Minnesota was bound to have a few that we liked. The biggest value adds over expectation came in the third and fourth rounds for Minnesota. We saw Cameron Dantzler (pick 89, PFF rank 50), James Lynch (pick 130, PFF rank 99) and Troy Dye (pick 132, PFF rank 59) much higher compared to where they actually went. The trio combined to add 0.4 WAR over expectation.

When we have to go into Day 3 to find the first pick we’d disagree with, the chances are that we liked your draft. That’s exactly the case for the Giants, who got a couple of steals according to the PFF draft board. The good news for Giants fans is that both of these steals impact the passing game defensively. Xavier McKinney ranked 19th on the PFF board heading in but was still available for the Giants at pick 36, while Darnay Holmes was the 86th-ranked player on our board and the Giants stole him at pick 110. While they didn’t have too many other big surpluses, the Giants also didn’t have any picks that we considered large reaches, either.