One of the most controversial selections of the 2020 NFL draft was the Philadelphia Eagles taking quarterback Jalen Hurts in the second round with the 53rd overall selection. The Eagles already have Carson Wentz as their putative franchise quarterback, who — at 27 years old and recently signed to a $128 million dollar contract — superficially fits the definition to a tee. Eagles fans and beat writers have a number of emotions on the Hurts pick, mostly ranging from confused to downright disturbed.

Further complicating feelings around the Hurts pick are comparisons to Taysom Hill and the focus on his role as a high-value backup, like Nick Foles. While Hurts could be a rich-man’s Hill or a stud backup, those should be thought of as secondary and tertiary benefits of the selection.

[Editor’s Note: PFF's instant analysis on EVERY pick of the 2020 NFL Draft can be found here. You can also find all of our pre-draft and up-to-the-minute analysis categorized and readily available here. Get your copy of the PFF 2020 NFL Draft Guide today by clicking here.]

The problem with the collective assessment of the Hurts pick is how most view the quarterback position outside of a binary lens: You either have a franchise quarterback or you don’t. This philosophy assumes that if you’re lucky enough to have a solid starter, you should be focused on using free agency and draft capital only to bolster the roster around him. It ignores the fact that a quarterback like Ryan Tannehill can go from franchise-status to a cheap trade chip and back to high-paid starter in the course of a few years. There is uncertainty with every quarterback, though with some more than others.

Instead of checking a box and assuming the position is filled, teams need to constantly assess what they have at quarterback and how best to increase their chances of having the highest level of play. Far too many front offices are willing to sit and hope that quarterbacks who have shown flashes will turn into consistently elite players, even if the likelihood was never high and is decreasing every season.

In this analysis, I’ll quickly touch on the mistaken assumptions that the Hurts pick is primarily valuable due to his potential in a Hill role or as a high-end backup, then dig deeper into the proper way to view starting quarterbacks on a spectrum of potential. We'll consider how that lens reveals the necessity to continue taking calculated shots at upgrading the position. But, ultimately, the Hurts acquisition is about optionality at the most important position in football.

The issues with spending a mid-second-round pick on a player like Hill — who has only played 41 snaps over the last two years at quarterback for the New Orleans Saints — aren’t new to the discourse around the Hurts pick. It’s clearly not worth the selection for such a limited role, though there’s nothing preventing the Eagles from using Hurts more extensively. There's plenty of reason to believe that Hurts brings much more to the table in even a limited role than former-UDFA Hill.

For all players with at least 100 quarterback snaps the last two seasons, the team EPA per play for the Saints with Hill was the fourth-highest of anyone (Wentz was 21st). Of course, 104 plays for Hill is a limited sample, but there’s some evidence that the Saints’ offense didn’t suffer much when he was behind center.

The Saints offense with Taysom at quarterback was most effective in short-yardage situations and near the goal line, areas where Hurts could also thrive and bring a more effective passing threat. Research by ESPN’s Brian Burke has shown on a similar play-type — the 2-point conversion — that quarterback rushing has a much higher success rate than any other type of run or pass.

Before getting into the value of a backup in the NFL, we should first get an accurate view of the opportunity cost of choosing a potentially redundant quarterback in the middle of the second round. Too often, draft analysis views selections as filling needs, instead of simply addressing them. Drafting a player in the second round doesn’t mean a positional need is satisfied. Second-round picks bust, they get injured and they might only play at a mediocre level.

Looking at all non-QB picks over the past 10 years in terms of our wins of average (WAA) metric, you can see how likely it is to get an above-average player at the 53rd pick (dashed line) where the Eagles selected Hurts. 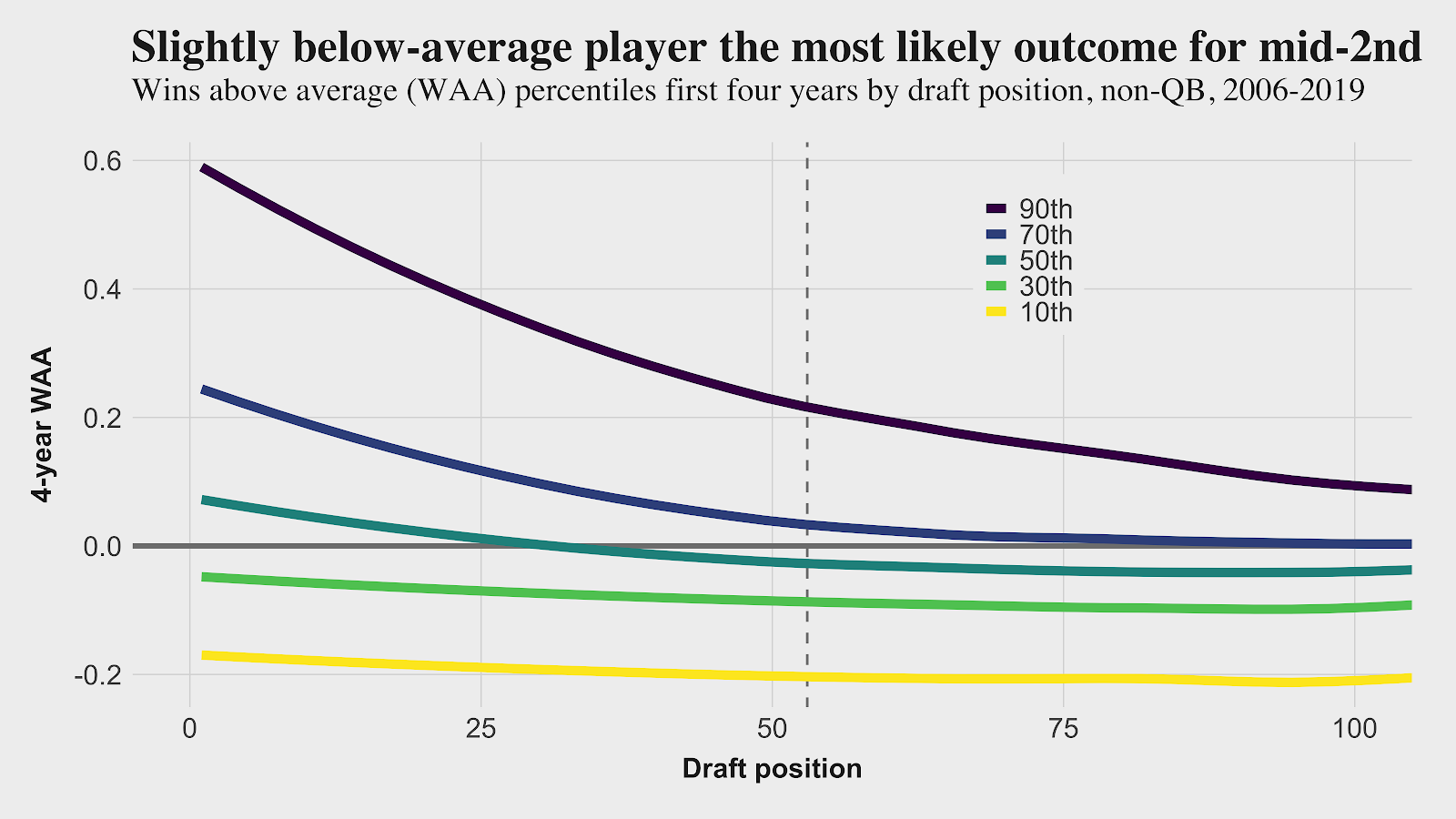 The 50th percentile outcome for the 53rd pick is slightly below average performance over the first four years, and even the 70th percentile is only marginally above average. Picks really pay off when players hit the 90th percentile or better of their possible outcomes. All picks, not just ones like Hurts, are most valuable at outlier outcomes.

For a backup quarterback, the value component is more difficult to realize without injury, but the payoffs are much higher than for other positions. The total expected wins above replacement (WAR) for a non-QB pick at the 53rd selection is roughly 0.3 WAR. Nick Foles produced 1.5 WAR in only two seasons, 2017 and 2018.

Wentz has been a solid NFL quarterback after being selected as the No. 2 overall pick in 2016. He showed promise as a rookie, was playing at an MVP level before injury in 2017 and has been in the 11 to 15 range among quarterbacks according to PFF passing grades and numbers-based efficiency metrics in 2018 and 2019. His four years of NFL performance give us confidence that he’ll be an above-average quarterback, but not necessarily an elite one.

Jalen Hurts is a stronger contender to become an elite quarterback than most think, especially for a prospect available outside the first round. Hurts was highly successful in his final season at Oklahoma, with a 70% completion percentage, 12.2 adjusted yards per attempt and a PFF passing grade only lower than No. 1 pick Joe Burrow among drafted quarterbacks. You can take issue with his late breakout, but quarterbacks like Russell Wilson have shown it’s possible to turn a late breakout into an elite NFL career.

The combination of Hurts’ extensive history as a starter, eye-popping stats and strong grades led a number of different models to conclude that Hurts had the upside to be an elite quarterback. Our college-to-pro forecasts have Hurts as the second-highest projected quarterback, below only Joe Burrow and above Tua Tagovailoa. Our text-analytics on the 2020 quarterback class, which harnessed years of Dane Brugler’s scouting reports, found that Hurts’ closest comps were Deshaun Watson, Jameis Winston, Marcus Mariota, Jared Goff and Baker Mayfield. Three No. 1 overall picks, a No. 2 overall pick and one of the top three best young quarterbacks in the NFL.

And it’s not only PFF that sees Hurts with elite-quarterback upside. Football Outsiders’ QBASE model found that Hurts was undervalued at an expected draft position of the late-third round. Developed by Andrew Healy — currently the Browns' senior personnel strategist — the model now would have Hurts’ projection only below Burrow's and Herbert's after accounting for his mid-second-round selection.

It’s not just numbers geeks who see this potential in Hurts. Doug Pederson explained on the Eagles’ post-draft conference call that they see Lamar Jackson as a fair comp for Hurts — and that senior offensive consultant Marty Mornhinweg, who was with the Ravens when they chose Jackson, was influential in the Eagles’ decision to draft Hurts.

The key to understanding the value of adding a quarterback like Hurts is understanding and estimating and the range of outcomes for quarterbacks. I’ve done work with Bayesian updating to incorporate NFL performance into the expectations and confidence we should have in quarterbacks. The numbers for Wentz show that he'll very likely be at least an average quarterback (92% probability), but less certain he’ll be a top-12 (60%) or top-six quarterback (20%). If you want to sit tight with Wentz assuming that you’ll have above-average performance, that’s a good bet. But average play isn’t the ideal at the position.

The probabilities table below quantifies with simple math how to think about quarterback range of outcomes and how to view the addition of Hurts as part of finding an elite QB.

If we assume Hurts is half as likely as Wentz to be a top-12 or top-6 quarterback, which is reasonable based on the probabilities in our college-to-pro model and QBASE, adding him to the quarterback room with Wentz raises the chance that the Eagles have a top-6 quarterback to 28% from 20%, or a 40% increase. In terms of finding a top-12 quarterback, the Eagles' probability with both quarterbacks rises to 72% from 60%, a 20% increase. These increases are well worth the investment of the 53rd pick, which, as we discussed earlier, normally yields a slightly below-average non-quarterback. Top quarterbacks generate 1 to 3 more wins than average quarterbacks according to our WAA metric, whereas the range for the best non-quarterbacks is around 0.3-0.7 wins.

This strategy of taking more shots at an elite quarterback doesn’t apply equally to every team. If you add Hurts to a player like Patrick Mahomes, he barely increases the chance of having a top-6 or top-12 quarterback.

The overarching lesson is that you can’t treat having Derek Carr as your quarterback the same way as Lamar Jackson, and you shouldn’t lock yourself into anyone but the truly elite at the position. The best way to raise the ceiling for team performance is to attain an elite quarterback, and more teams should be making moves like the Eagles to increase the chances of having one, even if they’ve spent draft capital and significant cap space on the position.

The Hurts acquisition gives the Eagles many options for unforeseeable circumstances. If Wentz fails, they have another quarterback with a great chance of success. If Hurts outplays Wentz in practice and they want to make the switch in a year, the Eagles will likely have strong offers for Wentz in a trade and the cap hit for the combination of Hurts’ contract and Wentz’s dead money will be roughly the same as Wentz’s scheduled 2021 cap hit. If Wentz gets injured, they have a potential high-level backup, good enough to give a team with many pieces in place a chance to win the title.

And even if Wentz rebounds to 2017 form, becomes an elite quarterback and remains healthy, the Eagles have the option to use Hurts as an enhanced version of Taysom Hill — and to potentially trade him down the road. Teams shouldn’t give themselves only one out at the most important position in the game, and the Eagles have gained insurance and upside with the selection of Jalen Hurts.