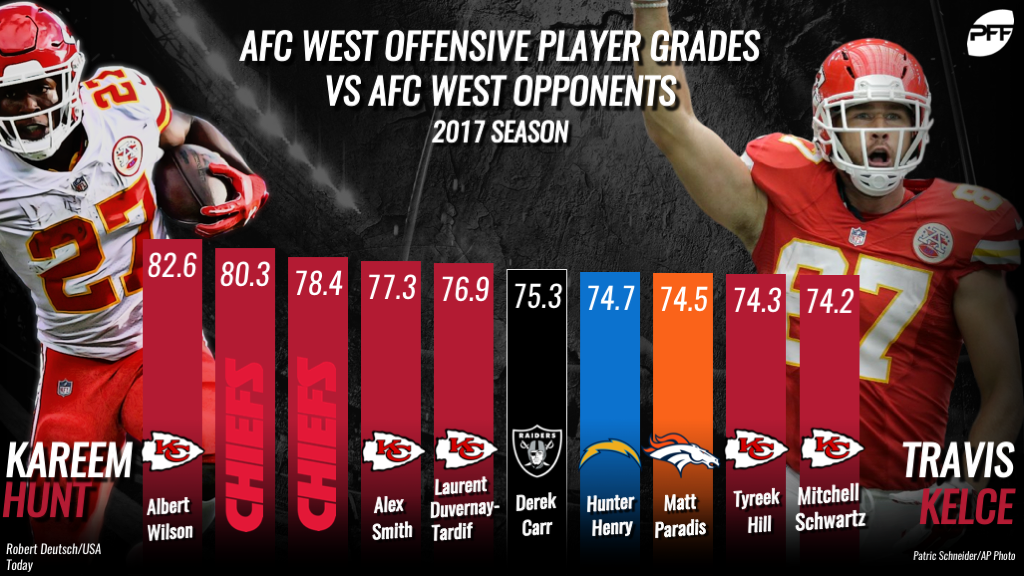 Perhaps the biggest surprise on this list will be the 5’9, 186-pound Albert Wilson. When playing against division rivals last season, Wilson caught 20-of-24 targets for 315 yards, two touchdowns and generated a passer rating of 146.5 – the best mark among receivers in the division. Coming off a career-year in which he earned an overall grade of 73.8, the AFC West can take a sigh of relief as Albert has taken his talents to South Beach to join the Miami Dolphins.

The rookie running back averaged 3.37 yards after contact per attempt when playing against divisional foes last season, ranking first among the division’s starting running backs, and considering that the AFC West is home to “Beast Mode,” that is a very impressive feat. More impressively, however, is the fact that Hunt gained either a first down or a touchdown once every three rush attempts on average. As they head into the new season, The Broncos, Chargers, and Raiders will have to try and control Hunt if they want to gain control of the division.

After 12 long NFL seasons, Alex Smith finally unveiled his secret deep-ball powers last year and catapulted himself to a career-high overall grade of 82.1. On 62 deep-passes (20+ yards downfield) last season, Smith threw for 1,344 yards, 12 touchdowns, one interception and a passer rating of 131.4, leading all quarterbacks. In divisional play last season, Smith notched an adjusted completion percentage of 77.1 and a passer rating of 103.5, leading all AFC West quarterbacks in both categories. The good news for the AFC West is that Smith has taken his talents to the Washington Redskins.

Kelce was the league’s fourth-highest graded tight end last season, and much of that was because of how he feasted on divisional opponents. Kelce had nine “explosive plays” (15+ yard gains) in divisional play, tying with Keenan Allen for the most among players in AFC West competition. That means he averaged more than one explosive play per game in divisional games. Expect to see Kelce continue to make big plays in 2018.

No, this isn’t a Chiefs’ article, but it might as well be, as the fifth consecutive Chief makes the list. Duvernay-Tardif moved bodies and paved the way for his running backs as he earned a 73.0 run-blocking grade in divisional play, ranking first among guards in the division and over six points higher than the next guard. He allowed only three pressures on 102 pass-blocking snaps in AFC West competition, ranking sixth out of 21 qualifying linemen in pressure-rate allowed. That’s pretty good for a division that has guys like Von Miller, Joey Bosa and Melvin Ingram.

Paradis allowed pressure on only 2.1% of his pass-blocking snaps against divisional foes, ranking fourth out of 21 qualifying AFC West offensive linemen. 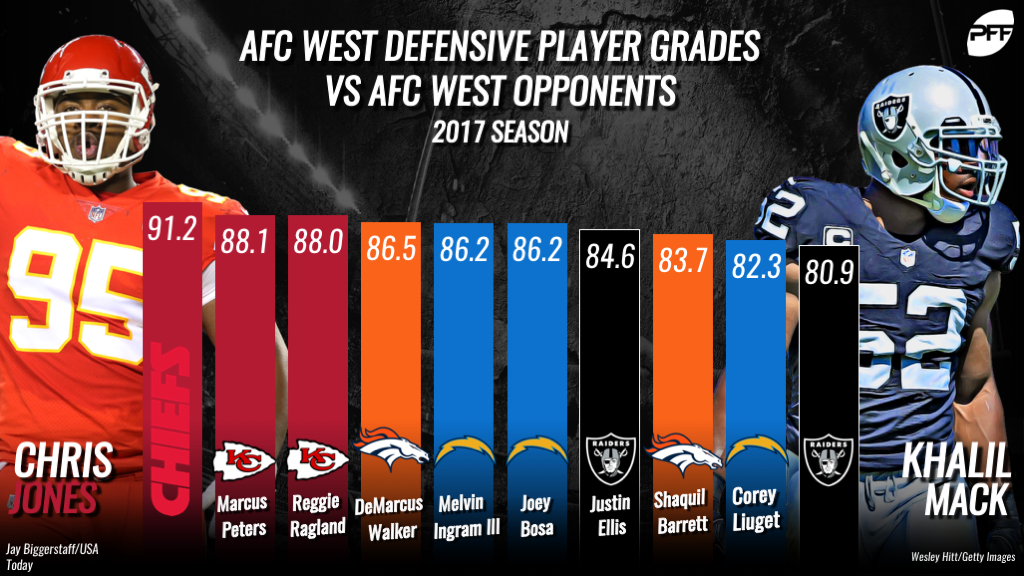 Marcus Peters made life miserable for AFC West wide receivers last season. On 19 targets in divisional play, Peters allowed only five catches for 29 yards and grabbed four interceptions. That equals to an unthinkable 0.0 passer rating allowed, which led all cornerbacks in the division by over 50 points. But wait, there’s more; Peters also had the highest run defense grade (93.7) among AFC West cornerbacks in divisional play last season. The AFC West must be thanking the football gods after Peters joined a bunch of other big names on the professional-athlete-to-LA train over the summer.

Ragland earned a run defense grade of 90.2 against AFC West opponents, ranking second among the division’s linebackers. On 40 run snaps in divisional play, Ragland tallied three stops and didn’t miss a single tackle. On a league-wide scale, Ragland had an overall grade of 76.0, ranking 15th out of 85 qualifying linebackers. Look for Ragland to have a third-year breakout party next season.

DeMarcus Walker is coming off a solid rookie season in which he posted an 86.5 overall grade against AFC West opponents. On a team stacked with good pass-rushers, Walker may see limited playing time just like he did last season; but look for him to produce when given a chance, as he registered an 18.5% pressure rate in AFC West games.

Ingram had a career-year last season, earning an overall grade of 85.3, tied for ninth out of 108 qualifying edge defenders in the NFL. As good as he was against the entire league, Ingram did even better when playing inside the division. He beat his blocker on 23.1% of his pass-rush snaps in AFC West games, leading all edge defenders. He also put up 29 total pressures on 169 pass-rush snaps in divisional play (eight sacks, four hits, 17 hurries). With steady improvement in his overall grades over his six-year career, Ingram is on track to being a staple member of the NFL’s “elite edge-defender” club.

No one exemplifies what being a charger means more than Joey Bosa, as he often looks like he has just been supercharged by a lightning bolt before each pass-rush. In the first two years of his NFL career, Bosa earned consecutive 85+ overall grades. His division rivals know that all too well, as he terrorized AFC West pass-blockers by winning 22.7% of his pass-rush snaps against them last season, ranking second among the division’s edge defenders. Look for Bosa to continue to leave blockers in the dust as he enters his third season.

Barrett had a run-defense grade of 83.0 in AFC West games, leading all edge defenders in the division.

Liuget earned a 72.7 grade in run defense when playing against the AFC West, ranking 10th out of 18 qualifying interior defenders.