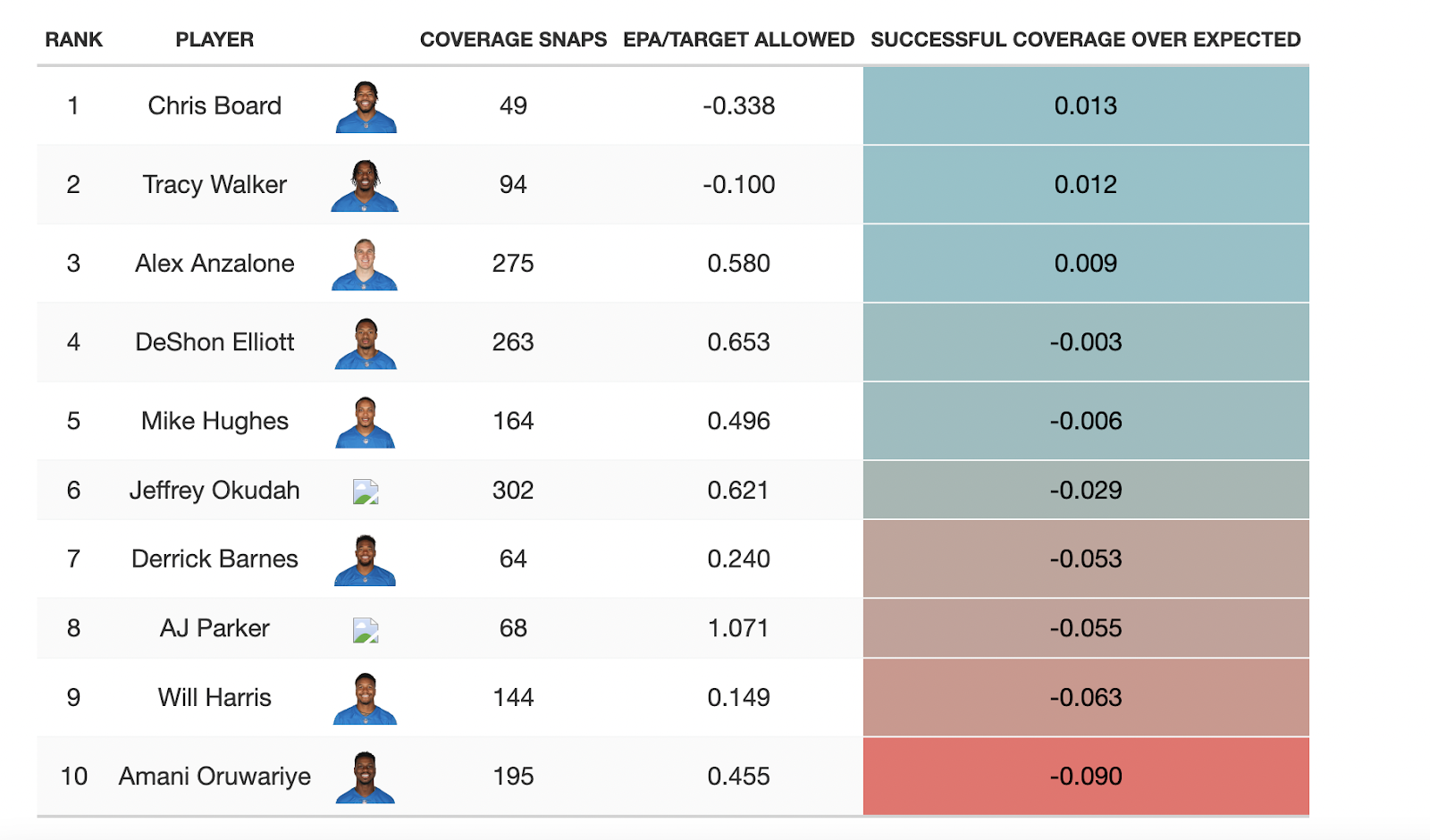 • Amani Oruwariye target practice: He's the 2nd-worst corner in PFF’s Successful Coverage Over Expected, and last in PFF grade, causing Oruwariye to lose his starting job. But with the injury to Jeff Okudah, Oruwariye will be forced into the starting lineup again.

• Gabe Davis will be the primary beneficiary: Lined up the most across Oruwariye. With a 98 PFF Deep grade, Davis is always a threat to hit on a few explosive plays to stack up the yards and increase the TD possibility.

• Unfavorable game script for Williams: Buffalo should succeed through the air, forcing Detroit to throw often. And with D'Andre Swift a week healthier and Justin Jackson‘s snap share growing each of the past 3 weeks, Jamaal Williams going under his rushing prop is an attractive last leg to this story. 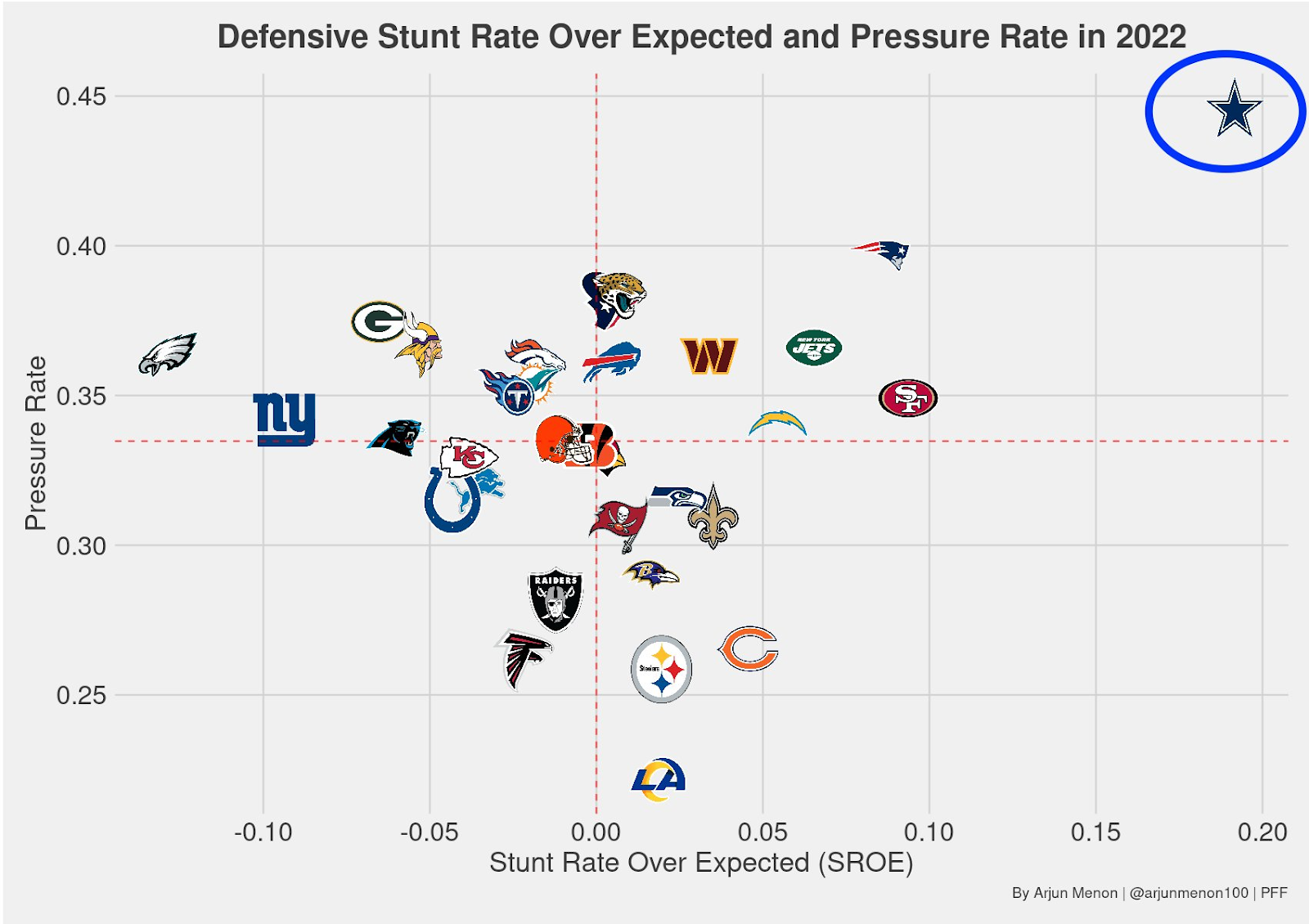 As PFF’s Arjun Menon has modeled, no team stunts more than expected than the Dallas Cowboys. 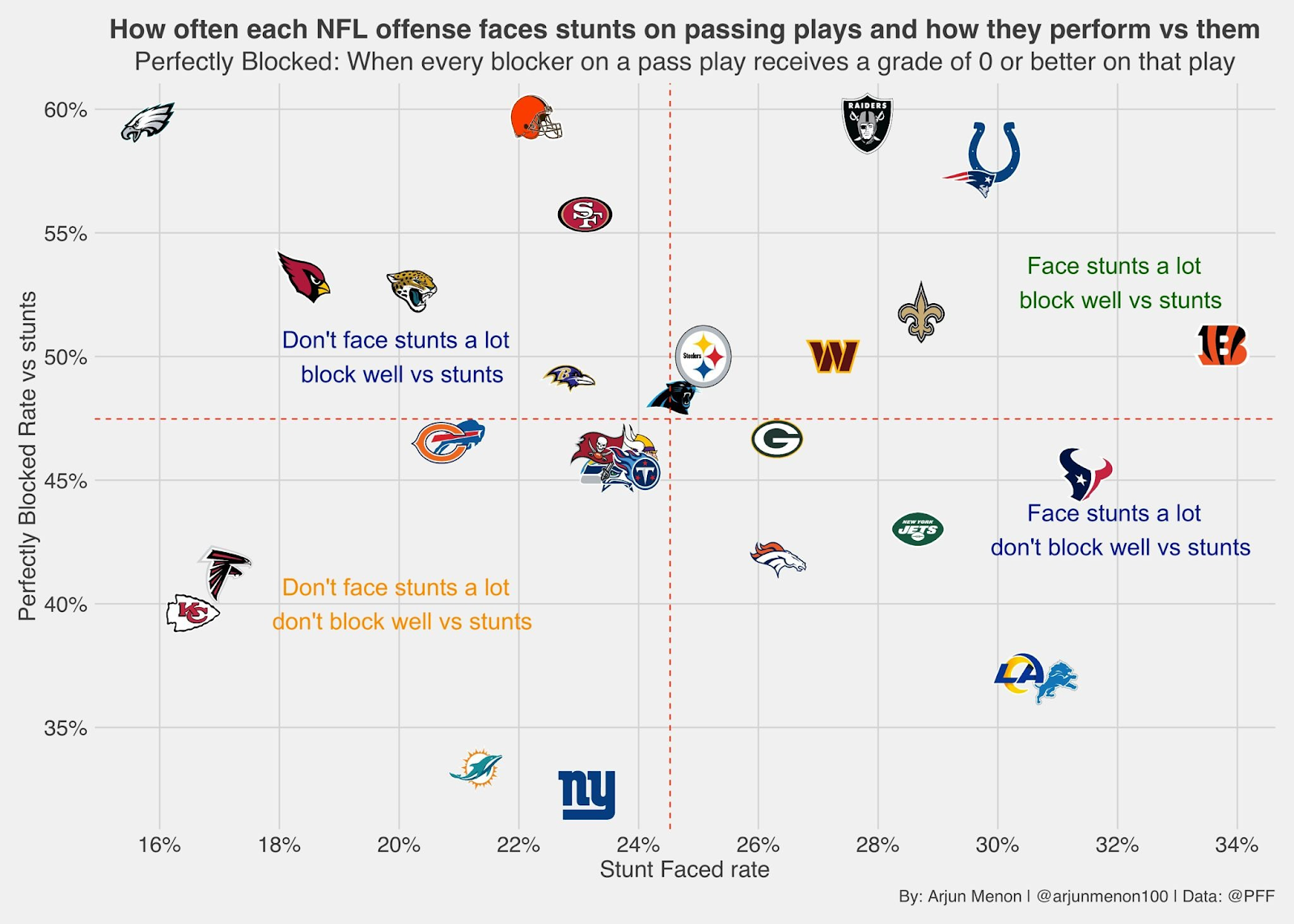 And again as Arjun shows, no team has been worse at perfectly blocking stunts than the Giants.

• No. 1 in NFL in sacks, pressure rate: and pressure rate, and the Cowboys pass rush might completely overwhelm. The Giants will be without four O-linemen which will certainly be hurting their cause.

• If Jones is continually taking sacks: The Giants offense will be off schedule, unable to sustain drives and the Cowboys likely can blow them out.

• Patriots have allowed the second-fewest WR receptions to WR’s, 6th-fewest yards to the position: Enter, T.J. Hockenson, who has garnered 9, 10, and 9 targets in his 3 games in Minnesota. With Bill Belichick looking to key on Justin Jefferson, Kirk Cousins should continually look Hockenson’s way en route to a big game for the big tight end.

• Rhamondre receives: A 76% snap share even with Damien Harris in the fold, as Rhamondre Stevenson quietly has earned the workhouse role at least in part because of his pass-catching dominance.

• Stevenson now attracts 6-8 targets, no matter the game script: As the Patriots continue leaning on his dynamic receiving ability. Look for Stevenson to capitalize on his snap share by racking up the receiving yards and getting in the endzone.