Week 17 NFL Team of the Week 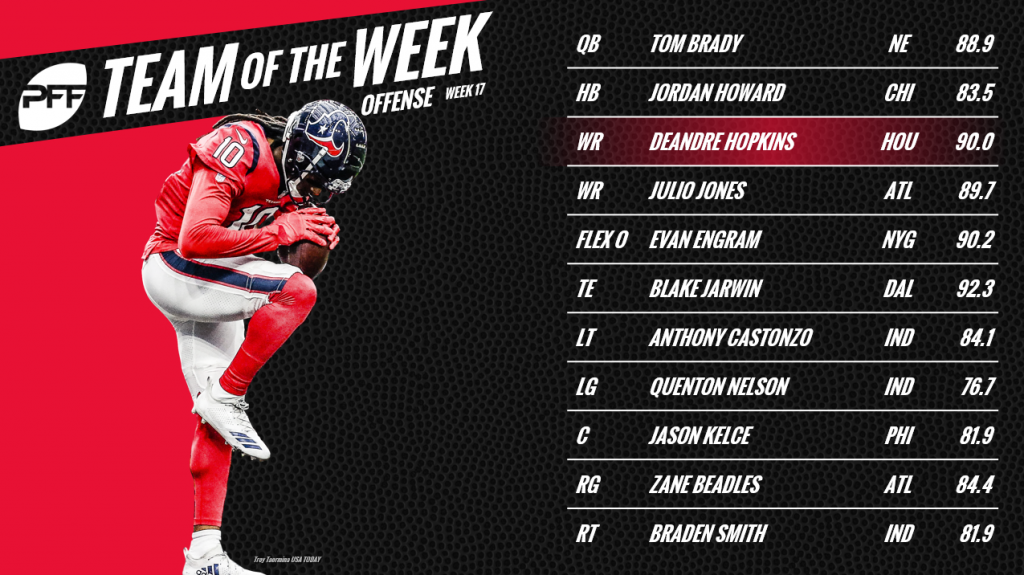 Brady was clinical when the Jets couldn't get pressure on him, going 19-for-25 for 200 yards with four touchdowns when they couldn't get there. Brady finished the regular season with a PFF grade of 90.7, his fourth in a row of 90.0 or higher.

Howard picked up 109 yards and two touchdowns from 21 carries in the win over the Vikings. He forced two missed tackles on those carries, with 86 of his 109 yards coming after being contacted by the Vikings defense.

The highest-graded wide receiver in the NFL did it again with another outstanding performance for the Texans. Time and time again he comes up with ridiculous catches, and the combination of Hopkins and Watson will scare any opponent in the playoffs. He picked up eight of his 12 receptions and 122 of his 147 yards against Jalen Ramsey in the win over the Jaguars.

Jones once again finished the season leading the league in yards per route run, coming in at 2.93 on the year. What's crazy is that this is the first time in the past four seasons where he's finished below 3.00. On Sunday he picked up at least one reception against seven different defenders in coverage.

Jarwin scored three touchdowns for the Cowboys in their win over the Giants, picking up 119 yards on seven receptions. He had receptions against six different defenders in coverage and finished the game with an NFL passer rating of 158.3 on plays where he was targeted.

Engram was a menace for Cowboys safety Jeff Heath to deal with in coverage, catching all five passes thrown his way when the two were matched up. Those five receptions went for 81 yards, averaging 16.2 yards per reception.

The Colts offensive line delivered once again on Sunday Night Football, with their left tackle allowing just one hurry from 43 pass-blocking snaps. He has allowed just 27 total pressures, including two sacks, since returning to the field in Week 6.

Nelson has gone from strength to strength over the course of the season, turning in one of his best run-blocking performances of the year in the Colts playoff-clinching win over the Titans. He also allowed just one hurry from 43 pass-blocking snaps and just 10 total pressures over the past 11 games.

Kelce delivered another top performance at center for the Eagles, producing a perfect 100.0 pass-blocking efficiency rating, with zero pressures allowed from 37 pass-blocking snaps. He also dominated in the running game, producing a PFF run blocking grade of 85.0.

Beadles has only been with Atlanta for five weeks but delivered his best performance of the year on Sunday. From 47 pass-blocking snaps, he allowed just one hurry, and delivered some key blocks in the running game.

The second Colts rookie and third offensive lineman to make the Team of the Week, Smith delivered one of the best performances of his rookie season in the win over the Titans. Like Castonzo and Nelson, he allowed just one hurry from 43 pass-blocking snaps. 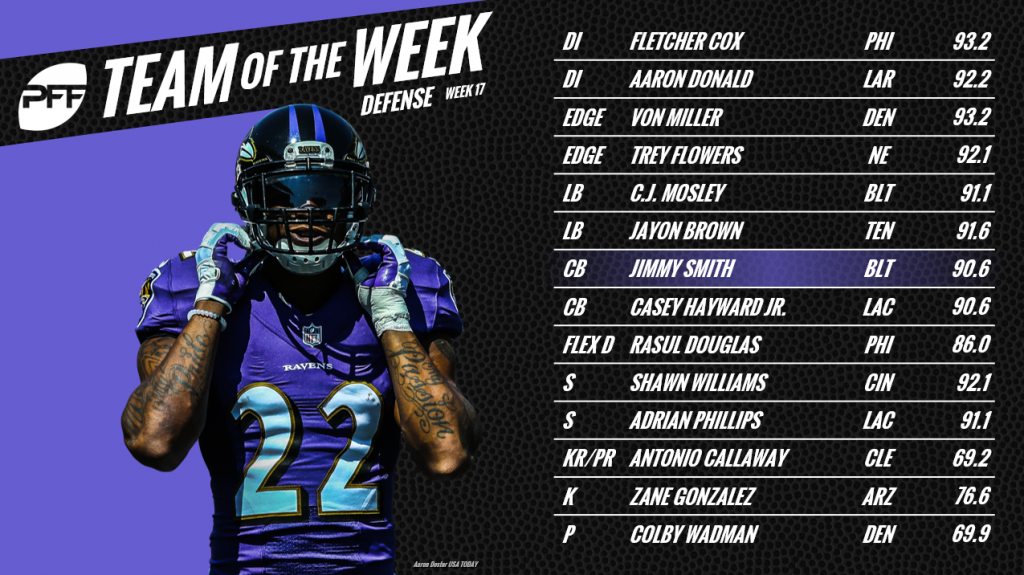 Miller ended 2018 with another impressive performance despite not registering a sack in the loss to the Chargers. From 21 pass-rushing snaps, he racked up a hit and five hurries and finished the game with two defensive stops.

Cox was downright unblockable for the Eagles for much of the win over the Redskins, racking up eight total pressures from just 22 pass-rushing snaps. That included three sacks, and he also forced a fumble. The big performance capped a career year in terms of PFF grade for the former first-round draft pick out of Mississippi State.

Nobody dominates quite like Aaron Donald! He ended the regular season with another huge showing, racking up a sack, two hits and three hurries from 31 pass-rushing snaps. He also registered three tackles, all of which resulted in a defensive stop.

Flowers has quietly been one of the best defensive players in the NFL this season and finished the regular season with his seventh 5-plus pressure performance in the win over the Jets. He registered a sack and five hurries from 25 pass-rushing snaps and finished the game with five defensive stops.

A year ago, the Ravens were lamenting a late-season defensive collapse, seeing their playoff hopes crumble at home. For a few moments on Sunday evening it looked like it was going to happen again, but then C.J. Mosley stepped up with the game, and season, defining play. He finished the game having allowed an NFL passer rating of 39.6 on throws into his coverage, but the defining moment will always be that pick.

The Titans needed playmakers on both sides of the ball to step up in a crucial AFC South matchup on Sunday Night Football and, while the Colts came away with the win, Jayon Brown did all that he could to tilt the contest in the Titans favor finishing the game with a forced fumble and a pick six.

Smith came up with two crucial interceptions earlier in the game for the Ravens, producing arguably his best game of the year in the final week of the regular season. Targeted seven times in coverage, he allowed just one reception for one yard and came away with two interceptions and a pass breakup.

Hayward allowed just one reception over the course of the game, and came away with a rare pick-two, returning a two-point conversion attempt the other way for two points for the Chargers. While he hasn’t been quite as dominant as he was a year ago, he’s still been pretty good and has allowed just four receptions in coverage over the past three weeks.

After a disappointing start to the season, Williams finished the season strong in the past few weeks, sealing it with an impressive performance in the final game of the year, and finding his way to the end zone. In Sunday’s loss to the Steelers, he allowed two receptions for 16 yards and returned an interception for a touchdown to open the scoring.

Phillips was targeted seven times in coverage in the win over the Broncos, allowing just two receptions for 16 yards. That resulted in an NFL passer rating allowed of 39.6 in coverage and helped Phillips to his highest graded performance of the season.

Douglas was targeted eight times in coverage, but allowed just four receptions for 42 yards, and came away with an interception. He finished the game having allowed an NFL passer rating of just 26.0, finishing the regular season on a high.

Be still my beating heart! Gonzalez has had his struggles throughout his two-year career, but he finishes 2018 with a fantastic performance that saw him convert on two field goals of 50+ yards.

Wadman punted six times in the loss to the Chargers, with four of those six landing inside the Chargers 20-yard line. A rookie free agent, he has been one of the top punters in the NFL over the second half of the season.

Callaway finished the season strong, helping the Browns' field position battle with a punt return of 37 yards, and a kick return of 35 yards.