The Washington Redskins defeated the Denver Broncos 27-11 in their final game at FedEx Field this season.

QB Brock Osweiler got the start for the Broncos and went 22-of-38 for 193 yards and an interception. The Broncos' leading receiver was WR Demaryius Thomas, who caught four passes for 52 yards. RB C.J. Anderson had 88 yards rushing and not only scored the Broncos' lone touchdown, but also caught a pass for a 2-point conversion as well.

QB Kirk Cousins was 19-of-37 for 299 yards, throwing three touchdowns versus just one interception. While WR Josh Doctson was his most targeted receiver, WR Ryan Grant ended the day as Washington's leading receiver, with 85 yards on just four catches.

Cousins finished 19-of-37 passing but was more accurate than his stat line shows. He had a receiver drop a pass, had two throwaways and was hit twice as he attempted to throw as well. Cousins completed four of his 13 pass attempts under pressure for 59 yards and one of his touchdowns. Washington's quarterback completed three of his seven deep passes (20-plus yards in the air) for 111 yards and 2 touchdowns. Cousins is third in the NFL in passer rating on deep throws.

On a relatively slow day for Washington's offense, Crowder caught all four catchable passes thrown his way for 47 yards and a touchdown to finish with an impressive wide receiver rating of 155.2. Crowder did all of his work lined up in the slot.

Fuller allowed just one catch on five targets into his coverage to go with two pass breakups. Fuller has had a breakout season during his sophomore campaign and as of right now he ranks seventh among cornerbacks with a just-under-elite 89.9 overall grade.

Osweiler faced pressure on 20 of his 46 dropbacks against Washington, and he struggled mightily with pressure in his face, going just 5-of-12 for 54 yards and an interception. The Broncos quarterback attempted just four passes all day that traveled at least 10 yards in the air and spent much of the afternoon throwing to his running backs.

Garcia allowed just two pressures in this one on 45 pass-blocking attempts (both hurries) and he led the Broncos with an 83.2 run-blocking grade. It's been a rough year for Garcia, who ranks 59th among guards with a 41.9 overall grade this season but he had a nice afternoon in Week 16.

Although he was playing on the losing team, Von Miller may have been the best player on the field Sunday. Miller produced two quarterback hits and four other pressures and when he didn't pressure the quarterback on a pass play he was beating the designated blocker assigned to him. Miller added two stops in run defense and forced a fumble in the fourth quarter as well.

Talib found himself targeted four times and yielded one reception for 13 yards. The Broncos defense as a whole made some nice plays, and Chris Harris Jr.'s 84.3 coverage grade was superb as well. An untimely cover bust later in the game doomed them, but Denver's defense kept them around for most of the game. 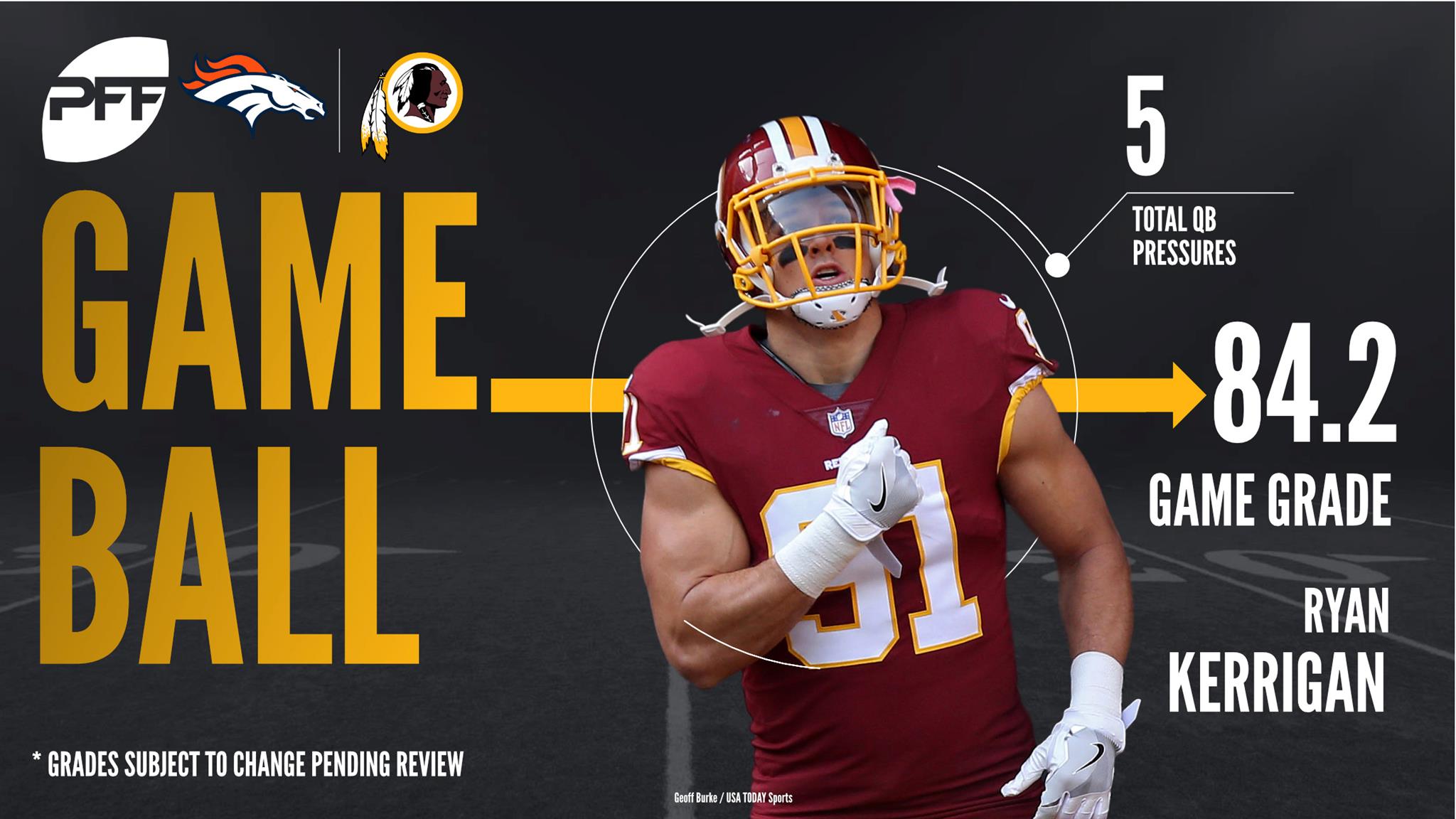