For the sake of Atlanta Falcons’ fans psyche, we won’t rehash how the previous two seasons ended (or the current Julio Jones contract conversations), but instead look forward to a loaded and experienced roster we just ranked second overall. The Falcons have All-Pro caliber players at every level on both offense and defense and were one of three teams with four players in the PFF Top 50 (Cowboys and Saints the other two). Jones returns as the highest-graded player of the bunch. 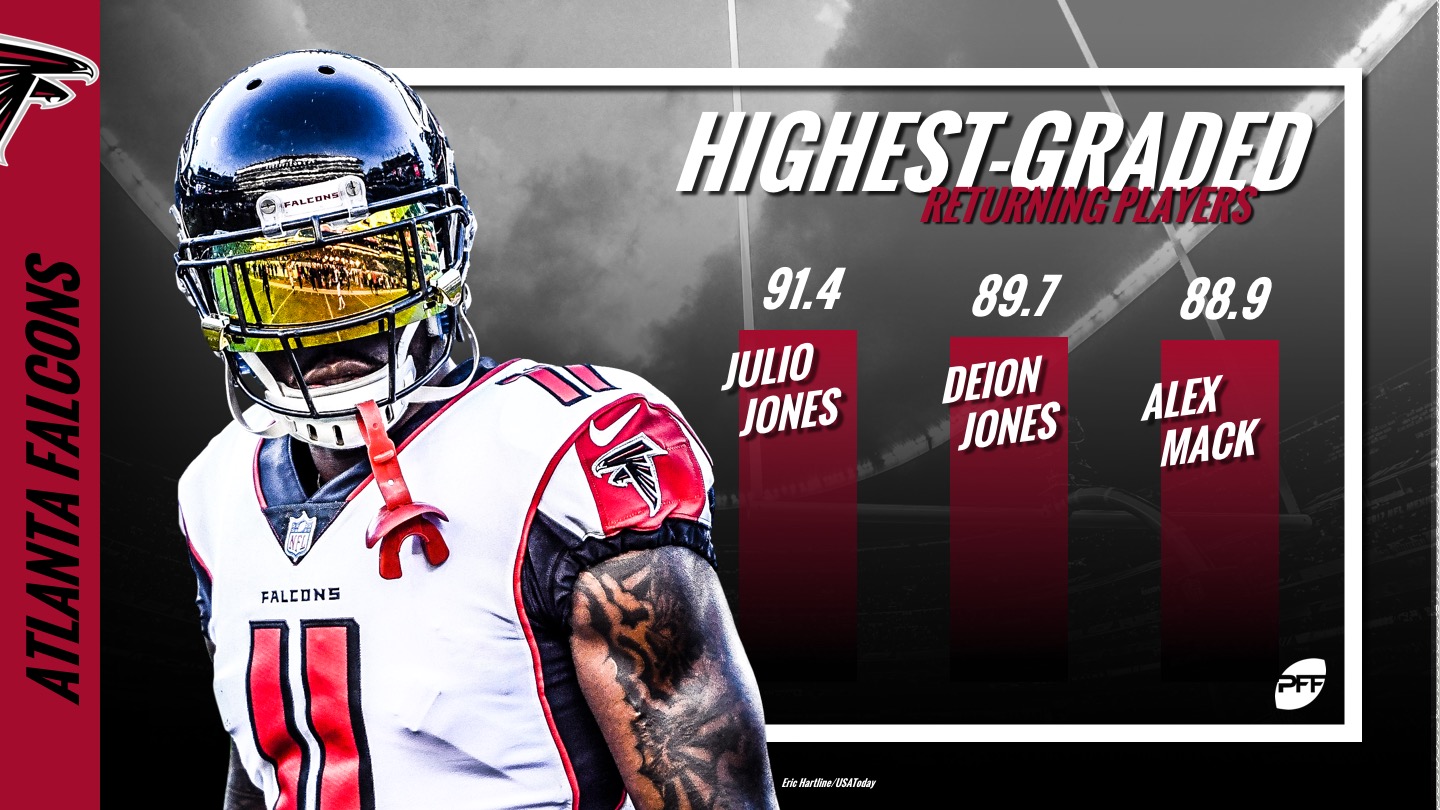 Coming into 2018, our PFF Forecast experts Eric Eager and George Chahrouri have the Falcons as the favorites in the NFC South and give them a 60.5% chance of the making the playoffs. To make those predictions come to fruition, the Falcons and their roster of few holes will have to continue to improve in specific spots (defensive line & right guard) while also getting continued strong play and development from those young standouts.

In our recent pass-rush rankings, the Falcons found themselves ranked 16th as gone are Adrian Clayborn (85.5) and Dontari Poe (81.1), who combined for 1,338 snaps and 92 total QB pressures on the defensive line last season, a third of the team’s overall total. To replace Poe’s interior presence, the Falcons drafted South Florida’s Deadrin Senat in the third round. Senat had career-high pass-rush (80.1) and run-defense (86.7) grades last season, amassing 26 total QB pressures and 37 defensive stops. In addition, head coach Dan Quinn hopes to revive Terrell McClain’s career (41.8 grade in 2017, career high of 74.4 came in 2014) while also getting consistent play from a now healthy Jack Crawford (59.7).

On the edge is a different story as two recent first-round picks will receive the bulk of opportunities. After a 16-sack second season, Vic Beasley (55.6 grade) became the prime example for why sacks are not stable year-over-year as he regressed in 2017 and recorded only six sacks and 28 total QB pressures. On the other side, Takkarist McKinley (77.8 grade) looks to take a leap in Year 2 with increased time on the field. His pass-rush productivity of 10.1 was second among rookies last season, just behind No. 1 overall pick Myles Garrett.

Even after coming back to the pack in 2017 from their record setting 2016, the Falcons were still one of the top offenses in the NFL. With all the core positions intact, the Falcons sought to upgrade specific areas. First, they signed veteran right guard Brandon Fusco (76.7), a top-25 ranked guard in both run- and pass-blocking in 2017, to upgrade the interior of their offensive line. Then, they drafted PFF’s No. 1 ranked wide receiver in Alabama’s Calvin Ridley (82.4 college grade), in the first round. 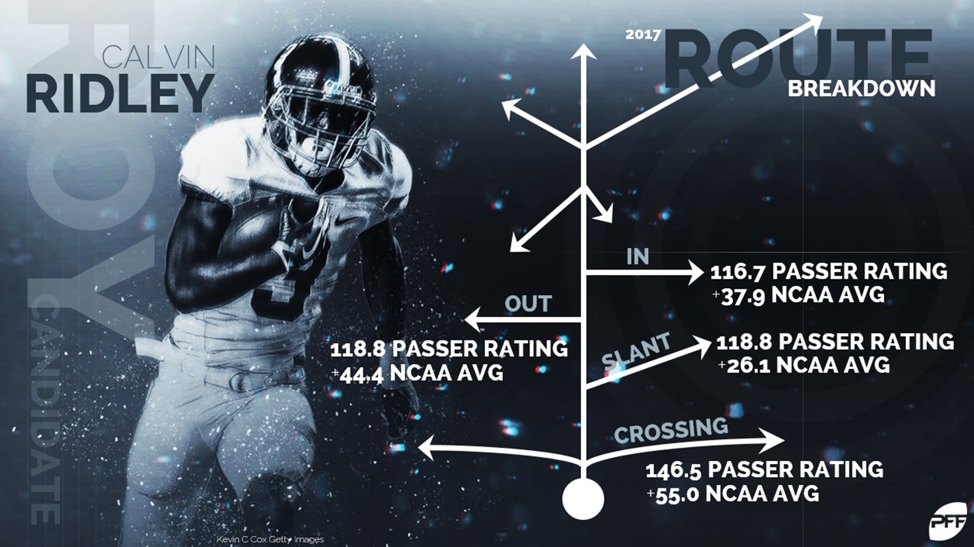 Ridley’s ability to get open that we highlighted prior to the draft will only add to the plethora of weapons at QB Matt Ryan’s disposal.

Outside of red-zone performance (career-low passer rating and completion percentage for Ryan in 2017), perhaps the biggest key to the Falcons this season is finding a four-leaf clover. In 2017, Ryan had the lowest rate of turnover-worthy plays – a great stat to lead. However, he also had (also courtesy of our PFF Forecast preview):

In other words, the ball had a really bad habit of finding its way into the hands of the other team, even when Ryan put the ball exactly where it needed to be.

Overall, the Falcons are hoping the common statistical phrase “regression to the mean” occurs in 2018 for Ryan’s turnover luck and that he and offensive coordinator Steve Sarkisian can work some Year 2 magic like year two of Ryan and Kyle Shanahan in 2016. If that happens and Ryan and Jones continue their elite play as well as the defense continuing to improve and get more consistent pressure on the quarterback, the Falcons will be seeing themselves play deep into January, and possibly even February on their home turf.