Frustrated with early playoff exits, the Kansas City Chiefs made significant changes this offseason. It is not often that you see an NFL team voluntarily trade a more-than-capable starting quarterback, but that is exactly what happened when the Chiefs dealt Alex Smith after arguably his best NFL season (87.1 overall PFF grade, T-sixth among quarterbacks). The Chiefs also shipped off their biggest playmaker on defense by trading away disgruntled All-Pro cornerback Marcus Peters. Despite the roster shakeup, the Chiefs remain legitimate playoff contenders as they vie to defend their AFC West crown.

The most compelling storyline surrounding Kansas City centers on how the immensely-talented Patrick Mahomes will fare as franchise quarterback. The Chiefs expended a substantial sum of draft capital to trade up and select Mahomes No. 10 overall in the 2017 NFL Draft with the intention of grooming him to become the quarterback of the future.

The future is now.

Mahomes looks ready to seize command of the offense after performing admirably in a Week 17 cameo against Denver last season, grading as PFF’s sixth-best quarterback with a 79.9 game grade for the week. He was particularly impressive when given a clean pocket, where his 9.6 yards per attempt would have ranked second among QBs last season and was well above the league average rate of 7.6. While this is just a one-game sample, let’s remember that Mahomes led all FBS quarterbacks with 5,057 passing yards and had an elite 90.2 overall PFF grade (fourth among FBS QBs) in his final season at Texas Tech. Mahomes is particularly well-equipped for success thanks to the myriad of talent throughout the Chiefs’ offensive skill positions.

For more on Mahomes and the rest of the league's quarterbacks – it's not too late to grab the 2017 QB Annual with accuracy charting, pass-by-pass data and much more  –

Kareem Hunt is a bell-cow running back and was a tackle-breaking machine in his rookie season. Hunt forced 77 missed tackles (61 on carries, 16 after the catch), tops in the league and 11 more than the next closest back. In fact, Hunt’s 77 missed tackles forced were the sixth-most ever recorded by a running back in the PFF era.

Tyreek Hill leads the wide receiver corps and is the NFL’s ultimate gamebreaker. He had seven receiving touchdowns last season, all of which went for 64, 40, 79, 56, 64, 30 and 75 yards to average 58.3 yards per touchdown. In the PFF era, players have recorded at least five receiving touchdowns in a single season on 628 occasions. Of these 628 examples, Hill’s 58.3 yards per touchdown bests them all by nearly four yards (DeSean Jackson averaged 54.8 yards per touchdown in 2014). With his speed, Hill does a lot of damage on deep passes thrown 20-plus yards downfield, as last season he led all pass-catchers (minimum of 10 deep targets) with 628 receiving yards and ranked second with six touchdowns and a 138.9 passer rating (NFL avg. passer rating on deep passes is 88.2) when targeted. He also did not drop a deep ball all season. 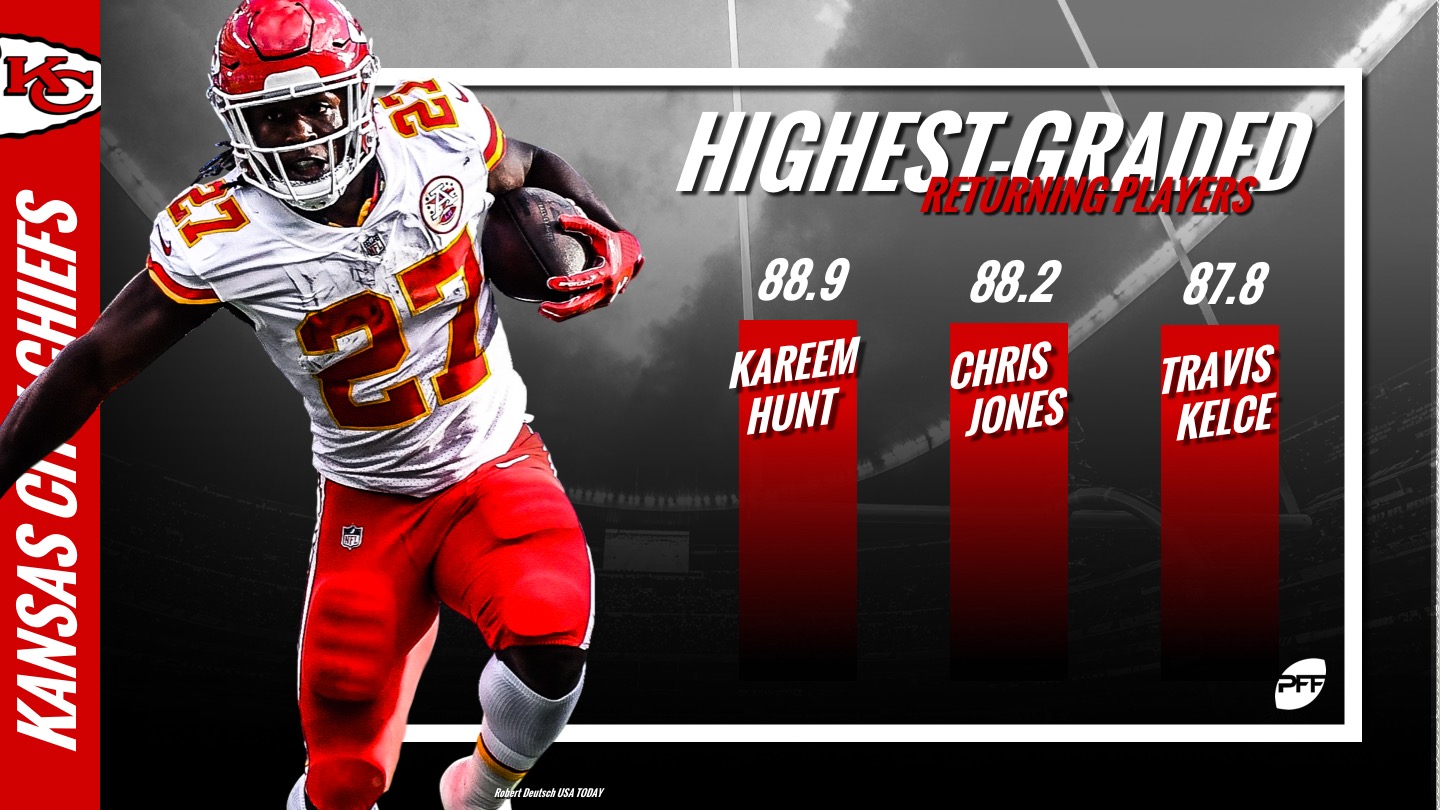 The Chiefs also deploy one of the league’s most dynamic players at tight end in Travis Kelce. Since becoming a full-time player in 2014, Kelce trails only Rob Gronkowski in on-field production. Kelce has averaged 2.08 yards per route run over the last four seasons, ranking second best among the 128 tight ends to have at least 100 total snaps in route. Unlike Gronk, Kelce can be counted to stay on the field as he has run 316 more routes than the Patriots tight end since 2014.

As a point of comparison, Kelce led all tight ends with 511 routes run last season.

The 2017 iteration of the Chiefs offense was heavily reliant on the production of Hunt, Hill and Kelce as the trio accounted for an astounding 56.6 percent of the Chiefs offensive touches. To that end, the Chiefs signed Sammy Watkins to bolster their depth and diversify target share. Watkins was a reliable target for a different second-year quarterback last season in Jared Goff with the Los Angeles Rams, generating a 122.0 passer rating on his targets (fifth best among all wide receivers). He was one of just three wide receivers to have at least 40 targets and not drop a single pass last season.

The return of Eric Berry

The Chiefs had PFF’s 32nd ranked defense last season and desperately need help in the backend after the departure of Peters. In 2017’s inaugural regular season game between the Chiefs and Patriots, Eric Berry looked to have done the impossible and shut down Gronkowski (two catches for just 33 yards) before suffering a season-ending Achilles tear late in the game. Berry recorded an 89.3 overall PFF grade in 2016 (fourth best among all safeties) and, if he can regain his form, is a bona fide gamechanger that will shore up an unproven secondary.

General manager Brett Veach shrewdly acquired Kendall Fuller from the Washington Redskins in the Alex Smith trade. Fuller was outstanding last season, grading as PFF’s fifth-best cornerback with a 90.0 overall PFF grade. He should operate as the Chiefs’ primary slot defender, an area the secondary struggled mightily last year. Fuller led all cornerbacks with 430 slot cover snaps last season while allowing a measly 55.0 passer rating on throws into his coverage, second best among all slot cornerbacks. The presence of Fuller may allow Steven Nelson to shift his coverage to the outside as Nelson allowed a 71.3 passer rating in coverage on the outside compared to 103.2 in the slot a season ago. 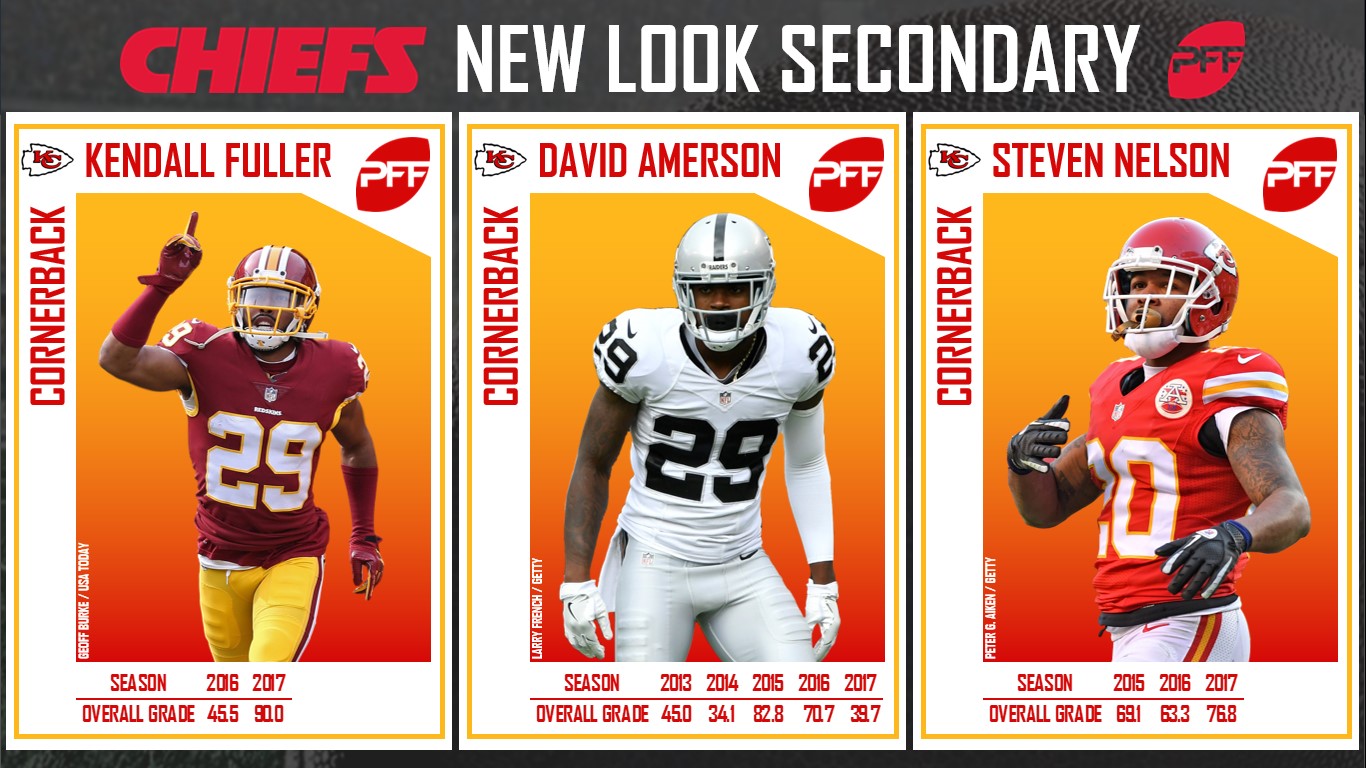 What about the pass-rush?

After knee injuries threatened to derail his career, Justin Houston returned to form last season as a force against both the run and pass (87.6 overall PFF grade, 15th among edge defenders). Houston’s 31 run stops tied Von Miller for second most among edge defenders while his 55 total pressures, though a far cry from the 87 pressures he recorded in 2014, ranked a respectable 26th.

Major question marks surround the remainder of the Chiefs pass-rush heading into training camp. Dee Ford broke out in 2016 with 53 total pressures, but a back injury limited him to just six unproductive games last season (48.7 overall PFF grade). Tanoh Kpassagnon flashed late in his rookie season when he recorded two sacks and a 77.4 game grade in his first extensive game action Week 17 against Denver. Chris Jones will look to build on his breakout sophomore year (88.2 overall PFF grade, 12th among interior defenders) by providing pressure and stout run defense from the interior. Jones finished as the ninth-highest graded interior pass-rusher last season (85.2 pass-rush grade) and he backed it up with 38 total pressures (17th).

If the Chiefs hope to reach their first AFC Championship under head coach Andy Reid, it will likely be on the back of one of the league’s most explosive offenses. The defense has enough question marks to temper expectations, but all the ingredients are there to make another postseason push. Whether or not the Chiefs achieve that breakthrough will ultimately depend on how Mahomes handles the spotlight. Though asking a first-year starting quarterback to take the reigns of a perennial playoff contender may seem daunting, the Chiefs are loaded with the offensive weapons to make this transition as smooth as possible.