A couple of weeks back, we upset Cowboys fans and surprised Buccaneers fans alike as we took the under on the former and the over on the latter. The Cowboys’ mark has since moved in some places to 8.5, but we’re here this week with some fresh places to look for value in the win totals market. We’ve pushed for the under for one of these teams on our podcast, the PFF Forecast, since the moment their game-winning kick was missed/blocked in the Wild Card round of the NFL playoffs, while our second team is a surprise, but in a division where the other three teams are moving in the other direction, the case is straightforward.

Without further ado, here are win totals three and four for this offseason.

[Editor's Note: George Chahrouri and Eric Eager are the minds behind PFF's Greenline product, which provides a real-time look at all NFL games with PFF predictions for the spread, moneyline and over/under. PFF Greenline is available exclusively to PFF's ELITE subscribers. Sign up today! 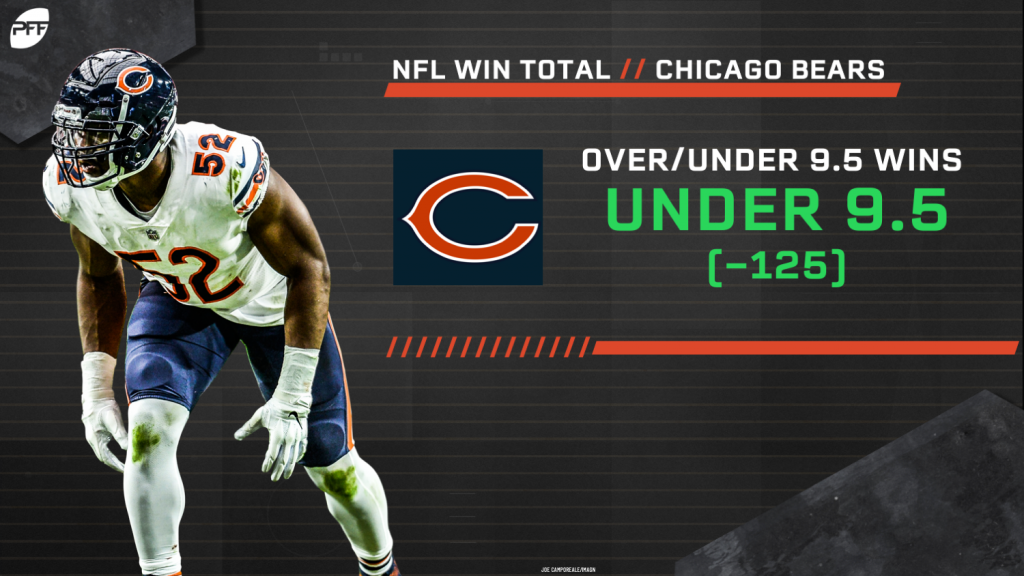 Point (George Chahrouri):  I walk a lonely road, the only one that I have ever known. Don’t know where it goes (probably hell), but it’s only me and I walk alone.

While everyone and their mother are busy penciling in the Bears to rep the NFC in the Super Bowl, I have decided to embrace the hate. There are two main reasons for this. None of them are personal (I swear).

First and foremost, the importance of the quarterback position. Mitchell Trubisky and the Bears' offense was not bad last year when you look at the results, but results in a small sample size space like football are not always the best place to go looking for predictive power. The Bears' offense as a whole ranked 10th in expected points added (EPA, measures how much a team improves their chance of scoring next on a per play basis) per pass play with Trubisky at the helm, yet Trubisky himself ranked dead last in the most consistent quarterback metric that we have tested, rate of negatively-graded plays (think uncatchable throws or bad sacks).

“BUT HE WILL IMPROVE, YOU A*****E!” they all scream between bites of brat'. I’m the biggest believer in growth mindset out there, but math is useful for a reason. Here is a list of the quarterbacks who have been in the bottom five in negatively-graded throw rate in a season and then ranked in the top 10 in EPA per pass play the following season:____________. That’s right, nobody (although Deshaun Watson led the league in negatively-graded play rate in 2017 and then ran the 11th-ranked passing offense in 2018 – hat tip to DeAndre Hopkins). The list of quarterbacks on the negatively-graded floor consists of Ryan Fitzpatrick (most frequent), Jameis Winston, Blake Bortles, Trevor Siemian, Joe Flacco, Andrew Luck (2012) and Jamarcus Russell, so there is a reason that math says a Trubisky turnaround is improbable.

The second reason for a Chicago regression is the defense. Led by Vic Fangio,  the Bears' defense led the NFL in overall EPA per play and EPA per pass play allowed, and the Bears' EPA per pass play allowed was nearly twice as negative as the second-ranked defense (Buffalo Bills). While this is tremendously impressive, we would be remiss just to assume that they will be able to sustain that absurd rate. Fangio is gone, and some key members of the coverage unit are also playing for new teams (Adrian Amos and Bryce Callahan). If you’ve been paying attention, you already know that coverage is the most important component of defense, but it's also not very consistent in part because you need a multitude of solid play at many positions simply to remain viable. We should also mention that the Bears picked up a first-round coverage stud in Roquan Smith last year, and they do not have an injection of first-round perfection coming their way in 2019. They managed to intercept 68% of the turnover-worthy throws (passes that earn the lowest level of PFF grade and are intercepted over half the time historically), which is nearly 20% above the NFL rate– certainly the ball-hawking skill of players like Eddie Jackson contribute to this, but so does the slate of opposing quarterbacks (they now play a first-place schedule) and a good friend named “luck.”

We need merely look back to 2017 to find a similar situation. The Jacksonville Jaguars rode a first-place defense with stellar coverage and a quarterback who didn’t play nearly as well as the game outcomes suggested to be a popular Super Bowl choice. That Jaguars' pass defense regressed from first to just sixth last season, and the bottom fell out. While Bortles North is not saddled with anything nearly as overhyped as Leonard Fournette or as worthless as the Jaguars' receiving corps, the mathematical parallels are strong.

Counterpoint (Eric Eager): The Bears are certainly talented, boasting a top-five roster in terms of last season’s WAR. They were the best team in the league a season ago at limiting opposing offense EPA on passing plays, which we know is the most important thing a defense can do. While slot cornerback Bryce Callahan and safety Adrian Amos are gone, plus coverage players in Eddie Jackson, Prince Amukamara and Kyle Fuller remain, and versatile linebackers Roquan Smith and Danny Trevathan help the Bears round out one of the league’s best back sevens. If Chuck Pagano can curb the same inevitable reversion in defensive performance as was seen in Minnesota and Jacksonville a season ago, the Bears will have one of the league’s best groups on that side of the ball.

Additionally, if quarterback Mitch Trubisky can improve from an encouraging, but ultimately below-average season from the second-year quarterback, there’s enough firepower on the Bears' offense to take advantage of what is, in terms of our PFF Massey ratings, the 11th-easiest schedule of opposing defenses. Matt Nagy was a top-10 offensive play-caller a season ago in his first season as the Bears' head coach, and he is much of the reason why the Bears' offense outperformed Trubisky’s fundamentals. Tarik Cohen was a top-five running back a season ago in terms of value, while Allen Robinson, Trey Burton and Anthony Miller have the potential to support Trubisky results-wise in any ascension he’d be capable of undergoing fundamentally. As George said above, I think the juice is out of the orange in that regard, but there are two sides to every play. 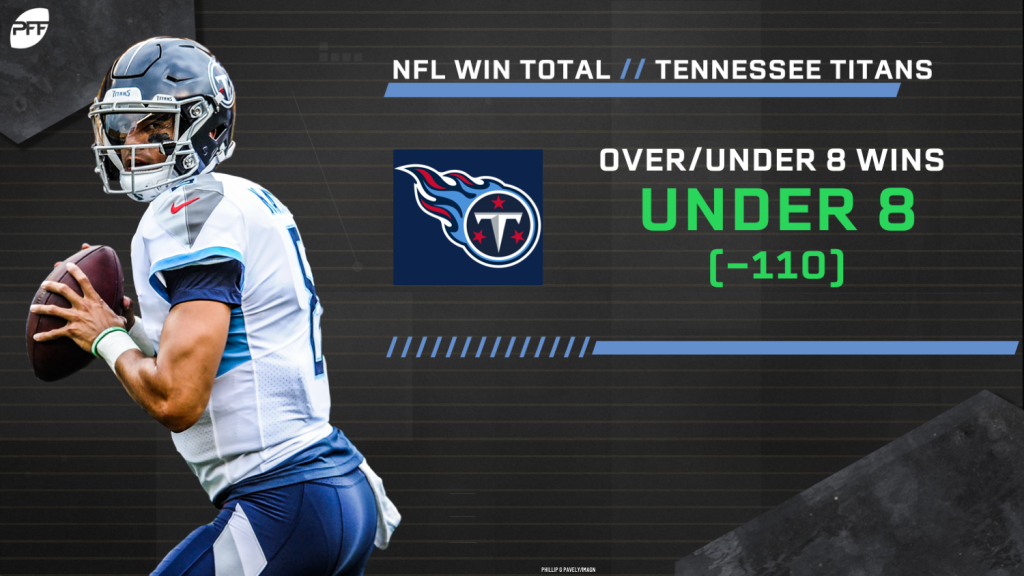 Point (EE): Only eight wins? The Titans have cleared this total in each of the last three seasons, and by our account, they had a pretty good draft. Looking deeper, though, fifth-year quarterback Marcus Mariota is dealing with his third offensive coordinator in as many seasons, behind an offensive line that got worse a season ago, and a receiving corps that is a middle-of-the-pack group, at best. Mariota hasn’t exactly been a brilliant quarterback simply in need of additional support, himself, earning middle-of-the-pack grades and numbers from a clean pocket. His 13.1% negatively-graded throw rate from a clean pocket was the ninth-worst mark in the league a season ago, which is one of the most stable traits for signal-callers.

The Titans' defense was pretty good a season ago, but they benefitted from an easy schedule in many ways. This will not be the case in 2019, where their opposing offenses are 13th-best in terms of PFF Masseys (12th overall in terms of PFFELO). We have Indianapolis as the clear favorite to win the AFC South for the first time since 2014 (over 40% of the time), and Houston (despite the league’s toughest schedule) should remain formidable with one of the league’s best young quarterbacks in Deshaun Watson. Nick Foles and the solid defense of the Jaguars are also likely to revert to the mean in 2019 (roughly 15% to win the division), leaving the Titans with a real possibility of finishing in last place in the South, making a 0.500 season a real difficulty.

Our simulations come out to 7.7 wins for Tennessee, with exactly eight wins occurring on roughly 18% of sims and over eight wins only 34% of the time. There were some 8.5’s available early in the offseason, which would have value until the price is about -190. At 8, there’s value until about -135.

Counterpoint (GC): I just sat and imagined a world where the Titans ended with nine or more wins. Pigs were flying. Dogs were talking. There were people searching for love on television shows with only 25 options…so yeah, I guess crazier things have happened.

It’s now or never for Iron Chef Mariota and his Nashville brethren. Ever since he entered the league, the Titans have struggled to put any sort of receiving corps together. Corey Davis has shown signs of life, improving his catch rate by 6% over his rookie campaign. A.J. Brown was a monster at Ole Miss and actually more productive than his more ballyhooed teammate D.K. Metcalf, averaging an impressive 7.1 yards after the catch per reception for his entire collegiate career. Mariota has been remarkably average as a passer, ranking 18th in both clean-pocket grade and negatively-graded play rate and 21st at avoiding uncatchable throws (most consistent data points for quarterbacks), so the added playmaking is exactly what the Titans' offense needs to start putting up points.

With the top teams in their division not without areas of weakness, there is certainly a chance that the Titans serve up on-field results that approach the heat served just down the road in downtown Nashville.