FOXBORO, MA - OCTOBER 29: Tom Brady #12 of the New England Patriots throws during the first quarter of a game against the Los Angeles Chargers at Gillette Stadium on October 29, 2017 in Foxboro, Massachusetts. (Photo by Maddie Meyer/Getty Images)

With half of the NFL season in the books, and every NFL team now at least eight games into their schedule, it’s time to take a look at the PFF All-Pro team for the first half of the season. 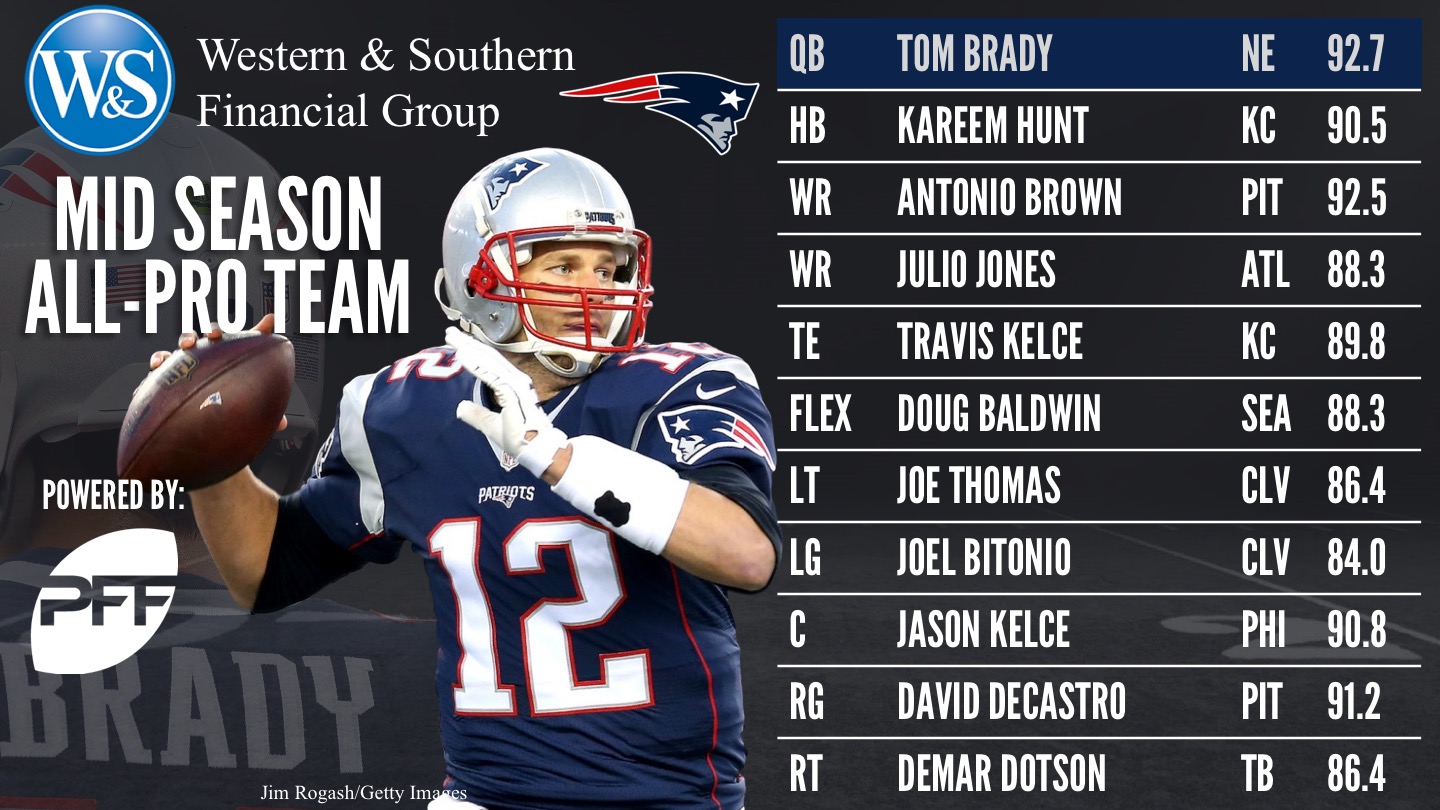 Elite Stat: Brady fields the league’s highest passer rating when under pressure at 101.7, a full 7.0 points higher than the next closest QB.

Tom Brady has once again set the standard for quarterback play in the NFL despite approaching the age players used to be inducted into the Hall of Fame at, let alone playing your best football. Brady has just eight turnover worthy plays all season, or 1.35 percent of his snaps, and has a passer rating over 100.0 both when kept clean in the pocket and when hurried.

Elite Stat: Hunt is the only running back with double-digit forced missed tackles on both runs and receptions, good enough for an elusive rating of 96.2, the second-best mark in the league.

His pace may have slowed in recent weeks, but Kareem Hunt’s start was so sensational that he still deserves to hold off the competition and maintain his place on the mid-season All-Pro team. He still leads all running backs in broken tackles, with 56 total to his name, 21 more than the next closest back, and for the season he has gained 3.2 yards per carry after contact.

Antonio Brown leads the league in yards per route run with 2.97, marginally ahead of Julio Jones, with that pair some way clear of the chasing pack. Brown is a complete receiver and can do everything his team needs despite his size, and has one of the plays of the season to his credit with his late touchdown to lift the Steelers over the Kansas City Chiefs.

The Falcons offense hasn’t been nearly as dominant as a season ago, but Julio Jones is still the receiver that can most terrify opposing cornerbacks with his blend of athleticism, speed and size. A horrendous drop this past weekend notwithstanding, Jones has been extremely productive, even if it hasn’t resulted in the touchdowns that fantasy owners have been craving.

Elite Stat: Kelce’s 2.14 yards per route run are good enough for third-best from the tight end spot this year.

There is no better tight end in the game after the catch than Travis Kelce, who can run like a wide out once he gets the ball in his hands.  Kelce has 11 broken tackles this season, more than twice as many as any other TE, and has gained 4.9 yards per carry after the catch, dropping just two of the 65 passes thrown his way.

Doug Baldwin is one of the league’s most underrated players, but he can consistently get open against even the game’s best defensive backs. This past week we saw that on display as he left Washington CB Josh Norman grasping at air, missing his jam at the line of scrimmage before Baldwin was able to walk in for a deep touchdown over the top.

Elite Stat: Despite injury, Thomas is still the only tackle in football to have logged 300 or more pass block snaps, and not allow a single QB sack.

The best two left tackles in the game this season have both been lost for the season, with Joe Thomas and Jason Peters both getting shut down. Both are worthy of their spot on the All-Pro team for the first half of the season though, as they each racked up more than 400 snaps before going down. In that time, Thomas did not allow a sack, and surrendered just 11 total pressures in seven games.

Elite Stat: Bitonio’s 97.4 pass blocking efficiency is 15th in the NFL, and seventh in the AFC.

All of the best-performing guards in the game this season have been on the right side of the line, but Joel Bitonio has been the best left guard in the league by some margin. For the Browns he has allowed 11 total pressures across eight games despite blocking for quarterbacks that do not make his job any easier.

Elite Stat: Over his last three games, Kelce has allowed just five pressures including not allowing any in his last outing against Denver in Week 9.

Jason Kelce has returned to form his best play this season for the Eagles and has been a major part of their offensive line being so dominant. Kelce has allowed 13 total pressures, which is more than ideal for a center, but his run blocking in Philadelphia’s zone blocking concepts has been fantastic, and catapults him to the top of PFF’s center rankings.

Elite Stat: On 286 pass blocking snaps, DeCastro has not allowed Big Ben to be hit, allowing just eight hurries but no QB hits or sacks.

David DeCastro and Zack Martin have been going toe to toe at the top of the guard rankings all season, and each deserves this spot almost equally, but we have given the edge to DeCastro. Who has yet to allow a sack or a hit on QB Ben Roethlisberger yet, surrendering just eight hurries in eight games.

Elite Stat: Dotson has allowed just eight pressures all season for the Bucs, for the second-highest pass blocking efficiency mark of 98.1.

Demar Dotson has been one of the best performers of the league on the quiet so far. For the disappointing Bucs, Dotson has been a rock at right tackle, surrendering just eight total pressures in eight games. Dotson hasn’t been nearly as good a run blocker as he has been a pass protector, but in keeping his QB upright he has been as good as anybody, left or right side of the line. 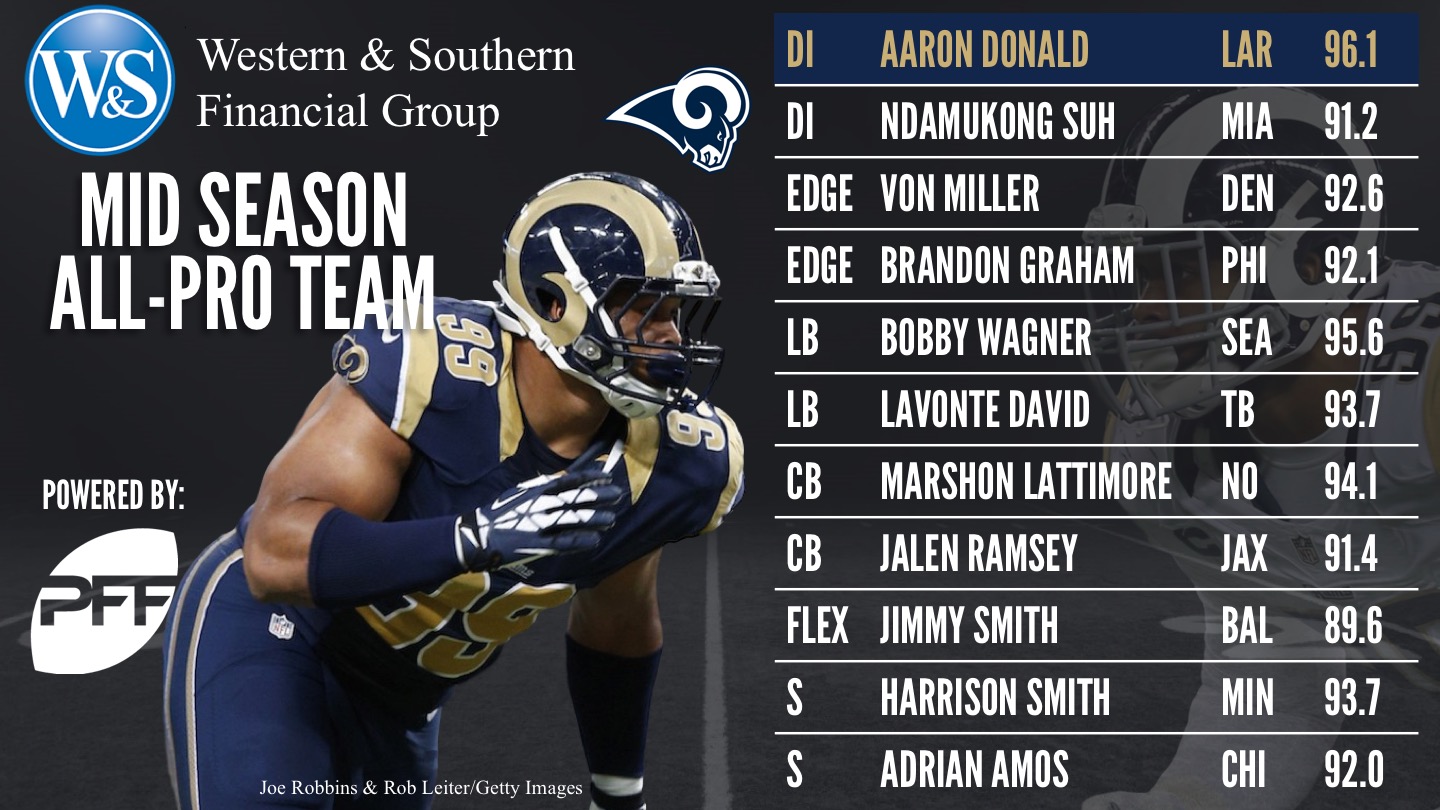 Elite Stat: No interior defender has more pressures than Donald’s 44, and he even missed a game this season.

Aaron Donald may be the best player in the NFL at any position. He has 44 total pressures, the second-most in the league at any position. He also has a top-10 run defense grade among all interior defenders and is able to play in the backfield with quickness and unparalleled ability to shed blocks and penetrate the line of scrimmage.

The second spot inside was a tight battle, with several players in the running. Suh is only really held back by his penalty count, which is again the highest mark among interior defenders (nine). Suh though has the second-best PFF grade among all interior defenders against the run (93.0) and has 23 total pressures.

Von Miller may be the best pure pass rushing talent in the game, and he leads the league in total pressures with 47, three clear of any other defender. Miller is also criminally underrated against the run, where his plays often go unnoticed or uncredited, but remain exceptionally impressive.

Elite Stat: Graham has 41 total pressures this season, which is tied for the third-most among edge defenders.

Brandon Graham has picked up in 2017 where he left off in 2016, dominating right tackles and racking up pressure on an Eagles defensive front that may be the best in football. Graham has 41 total pressures and 21 defensive stops on the season across 403 total snaps.

Bobby Wagner has been exceptional at the heart of a Seattle defense that has shown cracks they haven’t had in the past. Wagner’s speed when it comes to reading and reacting in the middle of that defense is peerless, and he is grading well in all facets of the game, including racking up ten total pressures on the blitz.

Elite Stat: David has brought down 17 total run stops, second among 3-4 outside linebackers this season.

Lavonte David seems to have developed a knack for stripping the football and forcing fumbles this season, but his overall game has been back to his best for the Bucs. He has 25 defensive stops, and has impressive grades both in coverage and against the run despite the Buccaneers defense struggling overall.

Elite Stat: Lattimore has allowed a passer rating of 37.4 when targeted this season, second-lowest among all cornerbacks.

There may be no more impressive debut than that of Marshon Lattimore, who hasn’t just been exceptional for a rookie, but has been the best cornerback in the game over the first half of his first season in the league. Lattimore has allowed less than half (48.5 percent) of the passes thrown his way to be caught and has yet to allow a touchdown.

If there’s a corner that can rival Lattimore over the first half of the season it’s Jalen Ramsey, who has been close to shutdown for the Jaguars. He has allowed a passer rating into his coverage of just 42.0, while picking two passes off and breaking up another six.

Elite Stat: Smith allows just 0.16 yards per snap in coverage, the seventh-lowest among all safeties, and lowest among safeties with at least 10 targets into their coverage.

The Vikings may have the best defense in the league, but Harrison Smith is the only player that makes the first half All-Pro team from it, despite a couple of other players running it close. Smith has been back to his best as the game’s most complete safety, excelling in any coverage and any area of the field for Minnesota, and intercepting three passes while breaking up another two.

Elite Stat: Despite being one of the more-frequently targeted safeties at 11.5 snaps in coverage per target, Amos only gives up 0.21 yards per coverage snap, 11th-lowest among safeties..

The play of Chicago’s defense has been one of the surprises of 2017, and in particular their coverage has been a revelation, with third-year Adrian Amos having a career year so far. Amos has made big plays all season, including scoring himself on defense, and over the last month in particular has been spectacular.

In 2014 it looked like Jimmy Smith may have been on his way to being one of the game’s best cornerbacks, finally teaming his immense physical talent with play on the field. This is the first season he has been back to that level, and has actually surpassed it in 2017. He has allowed just 106 receiving yards all season, giving up a passer rating of just 27.9 when thrown at, more than ten points worse than if quarterbacks had just thrown the ball at the dirt instead.

Prater hasn't been quite as dominant in recent weeks, but has been perfect on field goals of under 50 yards, and is tied for the NFL lead with five made field goals from 50 and beyond.

Kern has been a monster for the Titans this year, averaging 46.6 net yards per punt, 1.1 yards more than the next best punter. 16 of his 38 punts have landed inside the opposing 20 yard line, and 51.5 yards kicked average also leads the league by over a yard.

Jackson might not have found the endzone yet, but he has been consistently impressive on both punt and kick returns. Despite having a long of 46 yards, he has still managed to average 10.6 yards per return on his 16 punt returns.

Coleman is tied for the NFL lead in special teams tackles, making 10 on the year so far. He's also yet to miss a tackle. A consistent force for the Atlanta Falcons on kickoffs, he's having a great year.