DeAndre Hopkins is the most valuable non-quarterback in the NFL

The NFL continues to push the boundaries of what the game of football really is and what aspects of football most efficiently project to scoring points, preventing points and winning football games, both on the field and off. In the 2018 season alone, we’ve seen an all-time great in Drew Brees pushed by a first-year starter in Patrick Mahomes for the league’s MVP award, only to find the latter’s division rival (and the former’s backup) in Philip Rivers make a strong surge for the distinction as the season closes in. Aaron Donald is setting a new bar for what it means to be dominant on the interior of a defense, forcing many to consider him as an MVP candidate for the Los Angeles Rams.

On the other side of the coin, the latest three running backs picked in the top five of the NFL draft (Saquon Barkley, Leonard Fournette and Ezekiel Elliott) all played for offenses that failed to score a touchdown on Sunday, with two being shut out. Todd Gurley, for whom many cast a mid-season vote for league MVP, was not a focal point in the Rams' offense in any of their most important games so far this season, carrying the ball 13, 12 and 11 times, respectively, in their games against the New Orleans Saints, Kansas City Chiefs and Chicago Bears.

Discussions about what moves the needle in football have become more prevalent, and hence more contentious.

There’s something under the radar going on in Houston, however. The Texans are 10-4 and are currently the two seed in the AFC, despite having an offensive line that is surrendering pressure at a rate surpassed only by the Buffalo Bills, a defense that is fending off injuries and Deshaun Watson’s penchant for producing as many turnover-worthy plays as big-time throws. Watson has been very encouraging in his first full season as a starter, especially given the aforementioned pressure rate and the fact that he is coming off of a torn ACL. However, the offense is being driven by one of the most valuable players in the NFL that is not a quarterback, and that player is wide receiver DeAndre Hopkins. 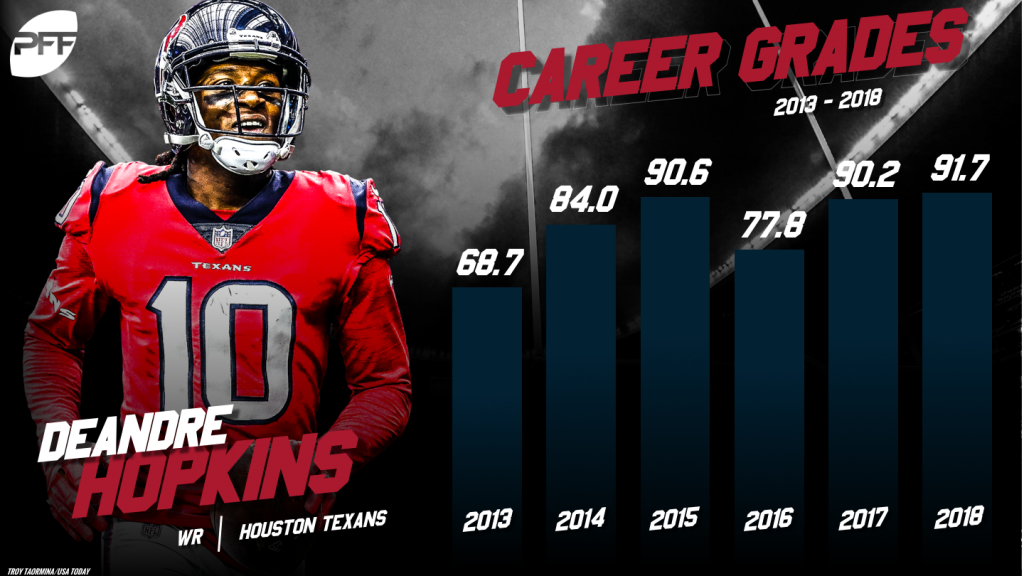 Value is a difficult thing to dole out in football since everything is interconnected and confounded with variables like home/away, weather, coaching, and injuries. However, we at PFF have a grading system that can untangle a lot of these correlations by design. For example, a perfectly-thrown pass to a receiver that is dropped will earn the quarterback a positive grade and the receiver a negative one. A contested catch by a receiver will receive a higher grade than a similarly-statistical catch that is performed while he is wide open. These grades go into our wins above replacement (WAR) model, although with weights for how different facets of play have historically mapped to wins at the NFL level. As you can expect, efficacy as a passer is the most correlated to winning, followed by (surprisingly) that in pass coverage and receiving, followed by rushing the passer. Stopping the run and running the ball is, as you would guess, further down the list.

Thus, the most valuable non-quarterback in the NFL is likely going to be players who are elevating a passing offense to heights higher than one would expect from quarterback play alone. That’s Hopkins. Whether his quarterback is Matt Schaub, Case Keenum, Ryan Fitzpatrick, Ryan Mallett, Brian Hoyer, Brock Osweiler, Tom Savage or Watson, Hopkins has shined since being selected as a first-round pick out of Clemson in 2013, earning the 40th, 12th, fourth, 23rd, fourth and best overall grade among receivers in that span, respectively. In terms of yards per route run, our seminal metric for efficiency for pass catchers, Hopkins is averaging 2.46 yards per route run this season, bested only by players like Michael Thomas, Julio Jones, Keenan Allen, Tyreek Hill and T.Y. Hilton. This has contributed to Hopkins being worth over 8.5 wins above a replacement during his career. Assuming a team of replacement players is equivalent to a 3-13 team, that’s good for almost a third of Houston’s total shares during that period. Truly remarkable.

Additionally, when we use some of our advantaged data – data that charts ball location and separation – it paints an even better picture for Hookins' recent value for the Texans. Since we began charting separation data, no player has received the “tight” separation designation on his targets more than Hopkins (followed by Antonio Brown, Mike Evans, Julio Jones and Demaryius Thomas coming into the week). He has fallen a bit on that list if you look at 2018 alone (he’s only in the top five heading into last week), which suggests that it’s no longer just poor quarterbacks forcing the ball to him in coverage. But the fact that he’s still in (and winning) contested catch opportunities more than most players at his position shows you how impressive his numbers as they relate to the league as a whole.

We were lower on Houston than we probably should have been going into the year. Part of them exceeding expectations has been the play of Hopkins elevating an offense that had too many question marks going into the season to be a sure bet. Fifteen weeks in, and given the small sample variance that is inherent in football, the Watson-Hopkins combination should be one to pay attention to as you handicap the AFC playoffs moving forward.