Below is the 10th installment of our weekly PFFELO rankings. Like all ELO systems, PFFELO is an iterative system that updates each team’s rating after each game based on two things: how well they played against their opponent and how well they were expected to play against their opponent.  The PFFELO rating system measures the former using our unique offensive, defensive and special teams grades, while the latter is determined by the PFFELO ratings leading up to the game and where the game is played.

Sometimes in football the best team does not win, and PFFELO accounts for these oddities by using our grades.  Hence there will be teams rated higher or lower in this system than their win-loss record would suggest.

The Patriots come off a bye into an AFC picture far clearer than recent weeks. It’s the Patriots, Steelers, Chiefs … and everybody else. Like they’ve had to do in the past, New England has to hide some personnel deficiencies on defense. They are 30th in total defensive grades so far, and 28th in our opponent-adjusted defensive rating system. Luckily, the Patriots play a relatively-easy schedule of opposing offenses moving forward, meaning some of their deficiencies can be ironed out by one of the league’s best coaching staff. Tom Brady (92.7) and the league’s highest-graded offense plays the league’s fifth-toughest schedule of defenses the rest of the season, though, promising an interesting second half for the defending champs.

The Eagles continue to fly high, with a defense that rushes the passer better than any other team in the league. With Fletcher Cox (88.3) and Timmy Jernigan (86.2) up the middle and Brandon Graham (92.1) and Vinny Curry (84.2) on the edge, opposing offenses (which comprise the 22nd-toughest remaining schedule in the league) are going to have a tough time keeping up with the second-highest scoring offense in the league. With Ronald Darby returning to the lineup soon to team with PFF mid-season All Pro Patrick Robinson (91.2), the sky’s the limit for this Eagles team moving forward.

Like the Pats, the Steelers’ bye week was a helpful one. AFC contenders Kansas City and Buffalo lost in less-than-impressive fashion, while the only two AFC North teams that played were also defeated. While the offense has not met expectations to this point, their offensive line is fifth in pass blocking efficiency (82.2) so far, while their run blocking grades register as the seventh-highest. With a weak slate of opposing defenses in the season’s second half, look for the Steelers to challenge for the conference’s top seed moving forward.

We’ve had difficulty handicapping the Cowboys all season, but it appears that as long as they have Ezekiel Elliott (86.1) on offense and DeMarcus Lawrence (89.9) on defense they’ll be a force to be reckoned with in a tough division. While Elliott’s status week-to-week is up in the air, Lawrence has been among the most-efficient pass-rushers at his position since Week 1, generating 11 sacks, seven quarterback hits and 24 hurries (good for a 14.5 pass-rushing productivity). This has allowed the Cowboys to rank in the top half of the league in points allowed despite a defense that, as a whole, has only graded as the 21st-best unit through nine weeks.

Three losses in four weeks have the Chiefs limping a bit into their bye week. While the defense (rated as the second-worst by our metrics) is the main reason for concern, the Chiefs offense has not been nearly as explosive during their skid. In the last four weeks, rookie sensation Kareem Hunt has averaged only 3.3 yards on 58 carries. His 14 missed tackles forced on runs are tied for the highest number during that time, so it appears that the issues are more systemic. Throw in the fact that the Chiefs have been a pedestrian 14th in pass blocking efficiency during that time, and there’s some cause for skepticism with respect to their offense’s ability to make up for their defense’s limitations moving forward.

After blistering the Giants in New Jersey Sunday, the Rams finally make their debut in the PFFELO top 10. They’ve already scored more points this season than all of last season, and have tons to be excited about with the combination of Sean McVay and Jared Goff. Goff has improved in every aspect of quarterback play this fall, placing in the top ten in yards per attempt (8.32), while generating a 107.6 passer rating (10 TD, 3 INT) when kept clean. Todd Gurley has rebounded nicely in his third season, leading running backs in rushing touchdowns while having the fourth-most yards on the ground. They play a tougher slate of defenses moving forward, so a real test is in store for the upstart Rams.

The Panthers have matched their 2016 win total (six), despite quarterback play by Cam Newton (70.5) that has been among the bottom of the league's quarterbacks. Their defense has allowed only 23 points the last three weeks, with Luke Kuechly (89.9), Kawann Short (88.7) and Thomas Davis (83.6) making up for the fact that four of their five starting defensive backs have PFF player grades below 50.0 through nine games. Kuechly’s been especially brilliant in coverage, allowing fewer than a yard per coverage snap and a 70.0 passer rating overall. By our metrics they have the league’s toughest remaining schedule, so it will be interesting to see if they can continue their winning ways starting Monday against the Dolphins and for the final six games after that.

Another week, another impressive win for the Saints against a less-than-impressive opponent. While their schedule gets more difficult in the second half, it’s easier than the rest of their opponents in the NFC South. Additionally, they have the best thing going at the quarterback position in their division, with Drew Brees (85.8) generating accurate passes at a rate of 80.9 percent, which is tops in the league. The addition of Alvin Kamara (first among running backs in yards per carry and fourth in yards per route run) has been a big boost to their offense, and the defense has emerged as a top-five group in the league. In a solid NFC, don’t be surprised if the Saints emerge as a contender for the conference’s second bye.

The metrics don’t seem to coincide with Atlanta’s 4-4 start. The Falcons are second in the league in our total offensive grades and eighth in our total defense grades, with a quarterback grading out as the league’s seventh-best signal caller. It doesn’t get easier from here, with Atlanta hosting a surging Dallas Cowboys team this Sunday in an attempt to avoid dipping below 0.500 for the first time since the Week 1 of 2016. To stop Zeke and Co., they’ll need a bit more productivity from second-year linebackers Deion Jones and De’Vondre Campbell, as they are currently near the bottom of their position group in run stop percentage (6.3 and 5.3, respectively).

In a game very characteristic of about two or three Seahawks contests a year, Seattle laid a complete egg at home against Washington on Sunday. Newcomers Duane Brown and Dwight Freeney were excellent, however, giving Seattle some hope moving forward. Brown allowed only two pressures in 62 pass blocking snaps against a stout Washington front, while Freeney needed only 23 pass-rushing snaps to generate two sacks, a quarterback hit and three hurries in his second game in Seattle. If they can get healthy over the next couple of weeks, their favorable schedule is one to watch moving forward as they compete for their fourth division title in five years. 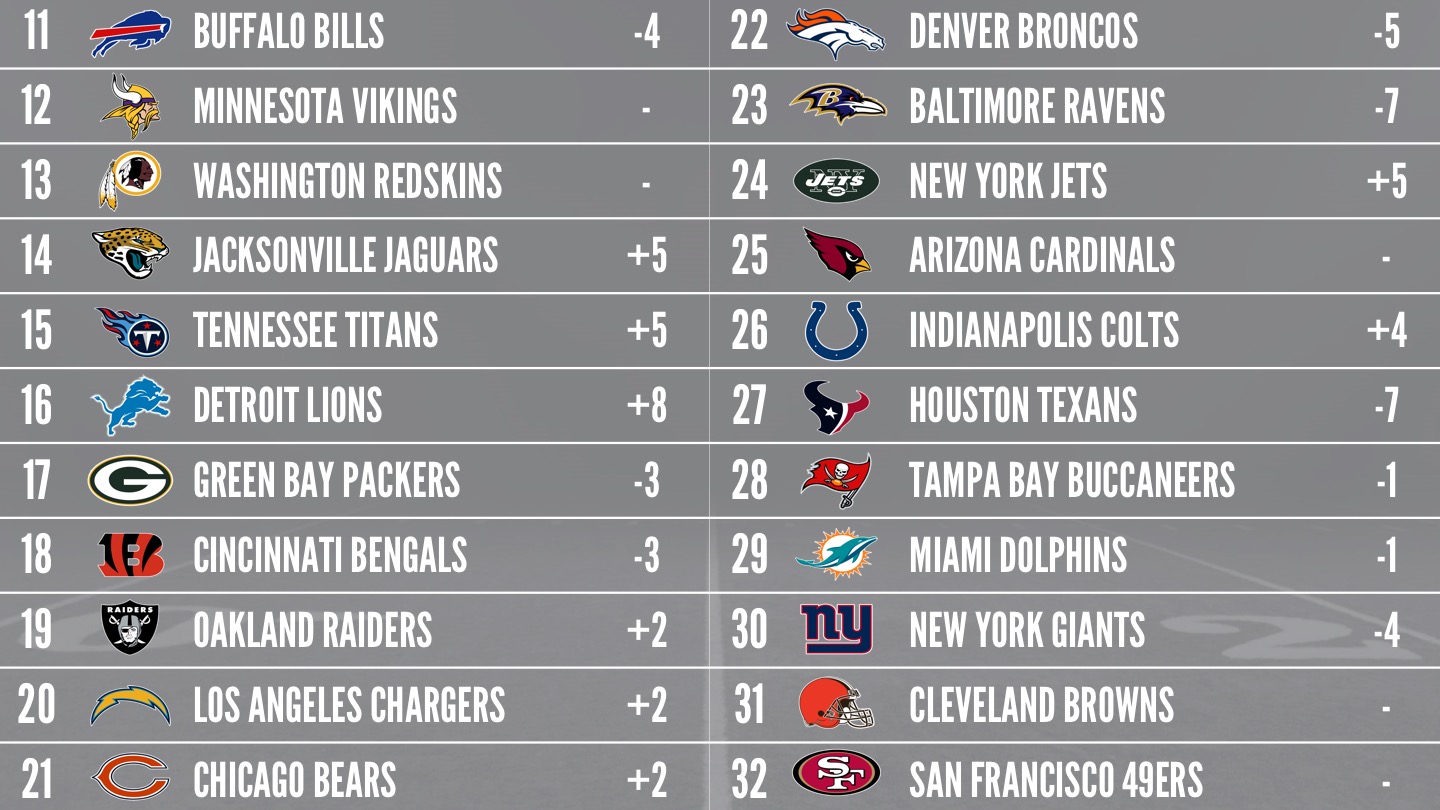