I followed a 2-1 in Week 6 with another 2-1 performance in Week 7, bringing my overall betting record to 13-11 this year. After a slow start to the season, I'm starting to stack multiple good weeks in a row. Let’s see if I can continue this hot streak.

Every week, I look at who has the edge in these five categories: quarterback, defense, offensive talent, play in the trenches and coaching.

Let’s get to my favorite bets of NFL Week 8.

I expect Justin Herbert to have a bounce-back performance after his lowest-graded performance (61.2)  of the season. The Chargers‘ bye week was probably the best thing that could’ve happened to them.

I know most people remember Los Angeles' 45-0 loss to New England last season; however, since that loss, Herbert has recorded the fourth-highest overall grade (90.7) among QBs while the Chargers boast an 8-2 record.

Herbert, who is sixth among QBs in passing grade this season, should outduel Mac Jones to lead the Chargers to victory. While Jones has been impressive for a rookie, Herbert has the edge in PFF grade, passer rating from a clean pocket, passer rating under pressure and turnover-worthy play rate — four of the most stable metrics for evaluating quarterback performance.

The Patriots don't have an impressive win yet this season, and I don't think it will come this week against the Chargers.

Related content for you: NFL Week 8 Odds and Best Bets via Eric Eager and George Chahrouri 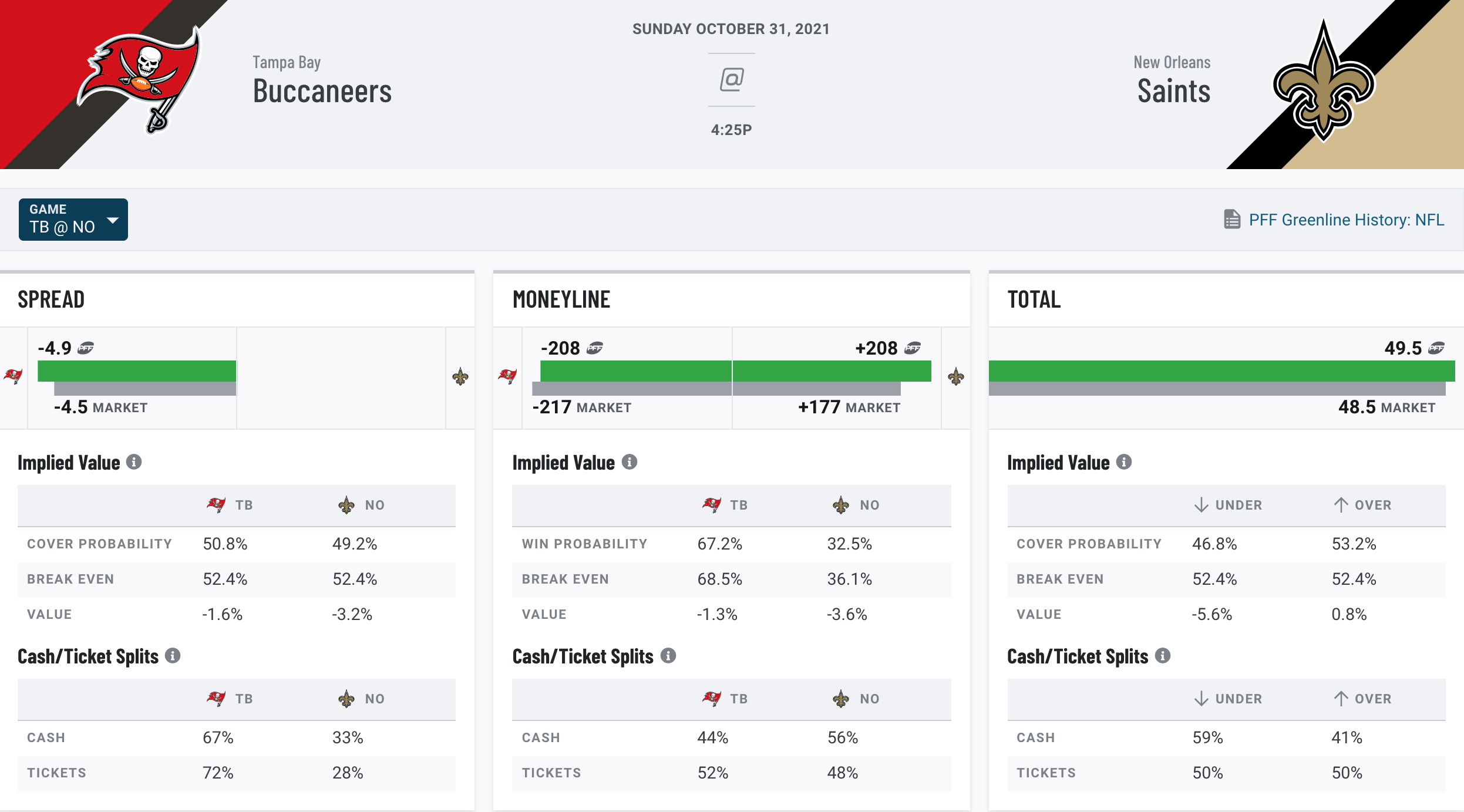 Tom Brady and the Buccaneers offense is clicking on all cylinders, as its currently tied for second in estimated points added (0.107) (EPA) per play and team-offense grade. Making matters more difficult for the Saints, Brady gets one of his favorite weapons, Rob Gronkowski, back this week.

On the other side of the ball, Lavonte David‘s return should help Tampa Bay slow down Jameis Winston’s favorite and most reliable target Alvin Kamara, who has the most receiving touchdowns and sixth-most receiving yards among RBs this season. David boasts the third-highest overall grade (90.9) and second-most stops (244) among LBs since 2017. David has the athletic ability to cover Kamara when need be.

Dog of the day: Pittsburgh Steelers (+4) over Cleveland Browns

I trust an old Ben Roethlisberger over a hurt Baker Mayfield. Roethlisberger has won two straight while Mayfield lost his last two starts and has an ailing shoulder. Give me the old guy in this duel.

Mike Tomlin’s Steelers have won four straight games coming off of a bye week, and I think that streak will continue against a banged-up Browns team this Sunday.

Darius Butler is a former NFL free safety. He was drafted by the New England Patriots in the second round of the 2009 NFL Draft. He has also played for the Carolina Panthers and Indianapolis Colts.