• Josh Allen's elbow injury is causing market fluidity in Bills -6.5 vs Vikings: And with the number likely to move between -2.5 and -3.5 if Case Keenum starts, the recommended strategy is to wait and buy low on Buffalo.

• An even better play than Dolphins -4 vs Cleveland: If bettors believe in the Miami offense and also think Allen could miss some time would be betting now on Miami (+500) to win the AFC East.

Let’s start by checking where the spreads in Week 10 have been at critical points in the past.

To start, let's take a look at the prior week injury information for every team and what that means for their outlook in Week 10. 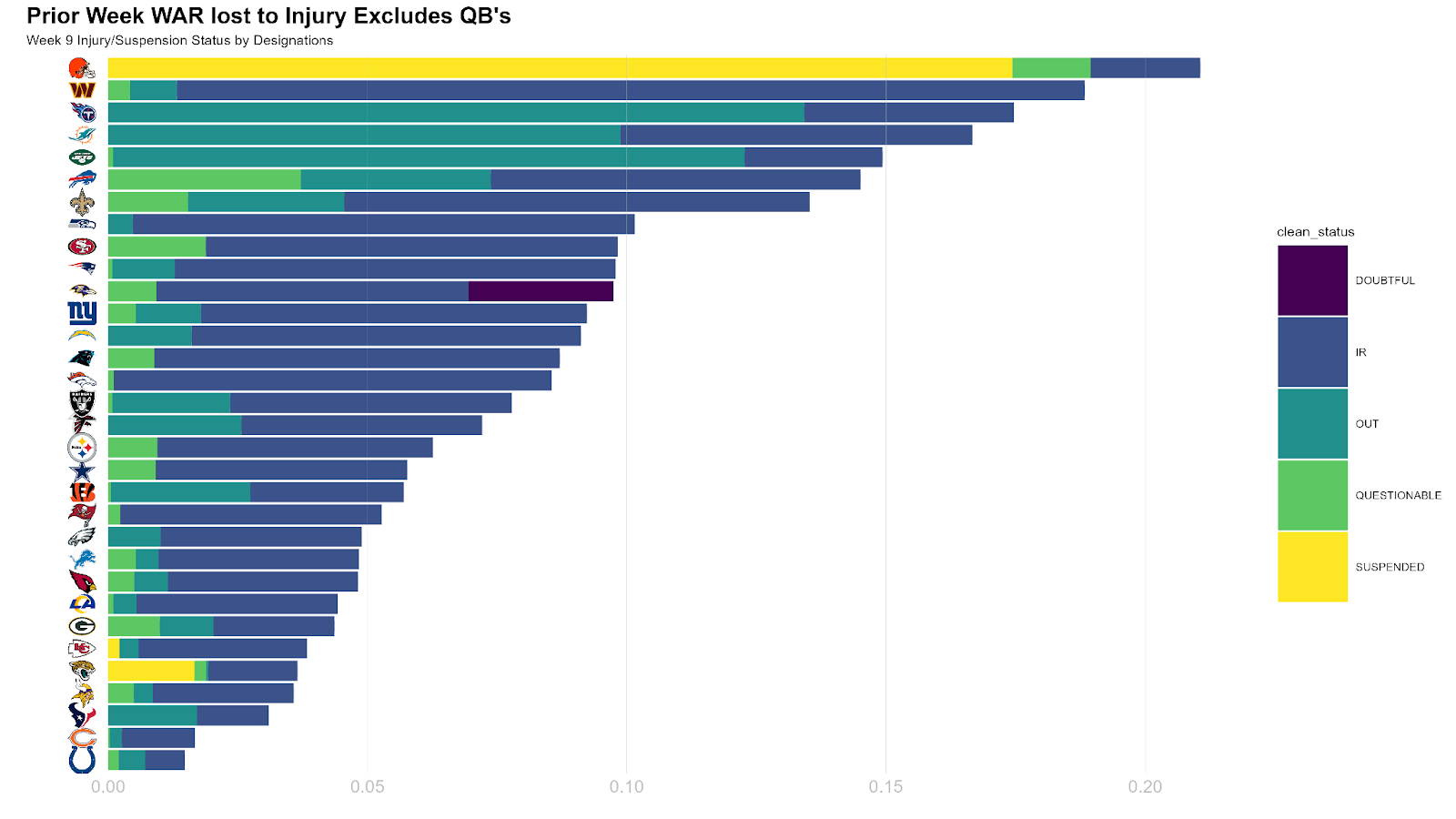 • The matchup that will surely dominate the Week 10 discourse: The 7-1 Vikings visiting the 6-2 Bills, also adding in the Josh Allen injury uncertainty. The market’s already baked some uncertainty into the number, moving from -8.5 on the lookahead to -7.5 opening and now down to -6. No one is saying this would be enough if Josh Allen is indeed out, but the question becomes: After the Justin Herbert injury game, if Josh Allen winds up starting, does the number move back toward Buffalo?

• -6 is probably where it holds: Given the valid concerns about effectiveness for an elbow injury that could have played a role in one poor performance already. With a baseline expectation of -6 to -6.5 with Josh Allen in the fold, where do we move to if Allen is indeed out?

• We should see further movement in the Vikings' direction: As this game probably closes between -3.5 and -2.5 with Case Keenum at the helm. Not only would the loss of Allen prohibit Buffalo's passing game, it likely also would have an outsized impact on the Bills' rushing success. Fold in all of the key injuries to the Bills defense, and from a pure line-movement play, it doesn’t look like we are heading any direction but down. But instead of chasing the steam, this seems like a spot to wait and buy low on the Bills if it really does come crashing down.

• No line movement is expected prior to kickoff: But if we do see some, it should say a lot about the opinion of sharp bettors on either one of these teams. Cleveland’s coming off an impressive performance before the bye and now returns healthier with their two biggest injured stars, Denzel Ward and Wyatt Teller, both likely getting in a full week of practice ahead of this AFC showdown.

• Despite another showcase game offensively: Miami still isn’t getting a ton of respect in the betting market. The line on this matchup dropped from -4.5 to -4, and it’s tough to get an accurate gauge on the ‘Phins' multi-week outlook as they head into a bye after this matchup.

• Given the uncertainty of Josh Allen's right elbow, Miami +500 to win AFC East has value: It’s possible Miami has the NFL's best offense, especially from an explosive plays perspective. In prior seasons that's been a great trait to buy into from a betting perspective. If you are a believer in the Dolphins, and also think Allen could miss some time, an even better play than -4 vs Cleveland is a bet on the Dolphins in the division market, where they're currently +500 at DraftKings. A win heading into the bye will boost their long-term outlook, and the longer Allen is out, the shorter the Dolphins' price will get.