NFL scores and recaps for every Week 8 game

PFF broke down the numbers immediately after every NFL Week 8 game, including scores, rookie standouts, offensive line performances and more.

Offensive spotlight: After a slow start, Ravens quarterback Lamar Jackson powered his team to victory, showing off his unique talents through the air and on the ground. Jackson finished 27-of-38 for 238 passing yards and two touchdowns in addition to generating 43 rushing yards from nine carries. With his defense stifling Tom Brady and the Buccaneers offense, Jackson wisely avoided turnover-worthy plays en route to a 6.4-yard average depth of target. As a runner, Jackson picked up three first downs and forced four missed tackles.

Ravens running back Gus Edwards also deserves a mention despite a relatively modest box score, finishing with 65 yards from 11 carries. Nevertheless, four of Edwards' carries resulted in first downs and he forced six missed tackles throughout the evening en route to an 85.0-plus rushing grade on first review —all of which were team highs. Unfortunately, Edwards sustained a hamstring injury in the second half that ended his night early.

Defensive spotlight: Even though the Ravens were able to find some success through the air in didn't come against Buccaneers cornerback Jamel Dean, who only allowed one catch from two targets into his coverage for three yards in addition to picking up three tackles, a forced incompletion and a coverage stop en route to an 80.0-plus coverage grade on first review.

Offensive spotlight: Russell Wilson wasn't electric by any means, but he did put together one of his best games as a member of the Broncos. The veteran went 18-of-30 for 252 yards, one score and one interception, with two big-time throws to one turnover-worthy play.

On passes thrown 20 or more yards downfield, Wilson went 2-of-5 for 85 yards.

Defensive spotlight: K'Waun Williams may have come away with the game-ending interception, but that wasn't the only play he made in London. Targeted five times in coverage, he gave up just two catches for 10 yards and one first down, allowing a passer rating of just 8.3 into his coverage.

Offensive spotlight: Despite the loss, the standout player on offense in this game has to be Panthers wide receiver D.J. Moore — for both the best and worst reasons. Moore hauled in six catches on 11 targets for 152 yards and a touchdown. That touchdown should have given his team the victory, but a penalty on Moore for celebrating pushed the extra point back. The extra point was ultimately missed, which is why the game went to overtime.

Defensive spotlight: On first review, Panthers cornerback C.J. Henderson earned the best defensive grade of anyone on either team.  He snagged an interception in overtime that should have led to an easy field goal and a win after a great return by Henderson.

Offensive spotlight: Pollard touched the ball just 15 times despite Elliott’s absence and Dallas playing from the lead throughout. He made those touches count, though. Pollard’s 6.3 yards per carry on the season rank first among running backs with at least 50 carries. Four of his 14 carries against Chicago went for at least 10 yards, and he forced five missed tackles on the ground. Few running backs in the NFL have been more efficient than Pollard over the last three-plus years.

Defensive spotlight: Jayron Kearse left the field several times due to injury but ended the game having played 71 defensive snaps (third most on the team) and with what will likely end up being his highest PFF grade of the season. Kearse notched two tackles for loss or no gain against the run and a sack, and he wasn’t charged with a reception allowed on 22 coverage snaps on PFF’s first run of analysis.

Offensive spotlight: After a rocky first start back from his scary head injury, Tua Tagovailoa may very well have had the best game of his career. He finished 29-of-36 for 382 yards and three scores. He was under pressure on only six snaps but was particularly impressive, as he went 2-of-3 for 50 yards and added an 18-yard scramble on his pressured dropbacks.

Defensive spotlight: It was a surprisingly rough day for one of the best safeties in the NFL. Jevon Holland allowed a catch on all five of his targets for 128 yards. That’s even crazier when you consider he had allowed only four catches for 45 yards all season long before this week.

Offensive spotlight: DeAndre Hopkins was arguably the best player on the field in a losing effort for the Cardinals. He caught 12-of-13 targets for 159 yards and a spectacular one-handed touchdown. Three of those receptions were contested catches.

Defensive spotlight: Za’Darius Smith was able to come up with multiple key sacks in the game, bringing down Kyler Murray twice even though his overall pass-rush win rate (10.3%) was far from stellar. Smith rushing from the interior is an athletic matchup problem for guards and centers.

Offensive spotlight: Alvin Kamara hadn’t scored a touchdown this season but set about rectifying that this week. He recorded one rushing and two receiving scores, accounting for 158 yards of total offense for the Saints.

Defensive spotlight: The Saints' defensive line woke up in this game after seven weeks of underachieving. Multiple players tallied more than one pressure, and David Onyemata had a pass-rush win rate of 30.8% on first review.

Offensive spotlight: Patriots running back Rhamondre Stevenson served as nearly half of New England’s offense with 23 touches for 143 yards from scrimmage. (The Patriots had 288 total net yards on offense.) He ran for 71 yards on 16 carries but was credited with 81 yards after contact. He caught seven passes on seven targets for 72 yards, and 65 of those came after the catch. He forced five total missed tackles in the game.

Defensive spotlight: Jets defensive tackle Quinnen Williams registered one of New York’s five sacks on the afternoon. He also added a quarterback hit and a hurry on 31 pass-rush snaps.

Offensive spotlight: That’s why the Eagles traded a first-round pick for A.J. Brown. Brown racked up six catches for 156 yards and three scores. And a good number of those weren’t getting caught unless the receiver's name was A.J. Brown.

Defensive spotlight: Javon Hargrave had himself a day against the Steelers' interior offensive line. He led all defensive players in the game with an absurd seven defensive stops. Three came in the run game, two on screens and the final two on sacks. He totaled five pressures on 32 pass-rushing snaps in an unblockable performance.

Defensive spotlight: Jeffery Simmons was at it again wreaking havoc on the interior for the Titans' defensive line. He registered six total pressures — three quarterback hits, two hurries and a sack.

Offensive spotlight: It seems as though this day was always going to belong to Commanders receiver Terry McLaurin, who caught seven of his eight targets for 113 yards and three first downs. He caught his only contested target — which all but sealed the win for his team — and three of his catches went for 15 or more yards.

Defensive spotlight: Washington DI Jonathan Allen was a handful against the run, as he recorded four solo tackles — all defensive stops — across 20 snaps. While PFF's first-run analysis didn't credit him with a pressure, he did notch three pass-rush wins.

Offensive spotlight: McCaffrey hit the triple-crown in his second game as a 49er. He scored a rushing touchdown, a receiving touchdown and even had a passing touchdown against the Rams. CMC became the first player to have all three since Hall of Famer LaDainian Tomlinson in 2005.

Defensive spotlight: Jalen Ramsey was on lockdown against the 49ers. He allowed two catches on three targets for 18 yards and also forced two incompletions. He allowed only 0.64 yards per coverage snap in the game. Ramsey also showed off his physicality with a forced fumble to go along with a run stop.

Defensive spotlight: On 58 snaps, safety Ryan Neal is on track to earn his second-highest defensive grade of the season. He was a prominent factor in run defense, where he tallied three tackles overall, two defensive stops and a tackle for loss. 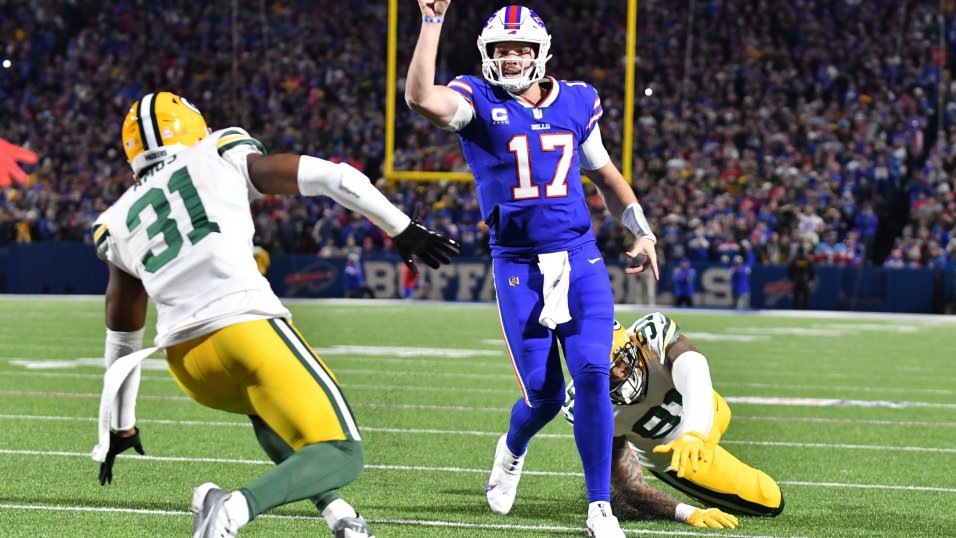 Allen completed 6-of-12 passes for 166 yards and two touchdowns under pressure tonight. And while Allen did throw a couple of interceptions and turnover-worthy plays, his two big-time throws under duress were key in Buffalo’s victory.

Defensive spotlight: Jaire Alexander heard a few choice words from the Bills receiving corps tonight, but the All-Pro corner dished out his fair share and backed it up with his play on the field. Alexander saw five targets in coverage, didn’t allow a single catch, forced three incompletions and intercepted one.

Offensive spotlight: Browns QB Jacoby Brissett put together a winning performance Monday night, finishing 17-of-22 for 278 passing yards and a touchdown. Brissett's 12.6 yards per attempt and 94.7% adjusted completion rate on first review were both impressive marks.

Defensive spotlight: Turn on any Browns game and edge defender Myles Garrett is probably the best player on the field — and that proved to be true against Monday night. The Texas A&M dominated as a pass-rushing, posting eight pressures, two sacks and a 32.3% pass-rush win rate. If it weren't for Dallas Cowboys star defender Micah Parsons and San Francisco 49ers edge defender Nick Bosa, Garrett would be the runaway favorite for the NFL's Defensive Player of the Year award.