Odell Beckham Jr. has been part of the problem for the Cleveland Browns

Heading into the season, we thought that Odell Beckham Jr. was primed for a huge season based purely on the potential upgrade at quarterback from Eli Manning to Baker Mayfield. That hasn’t manifested itself, but don’t be lulled into thinking that OBJ is once again the victim of circumstance in a new venue — he is a significant part of the problem.

Don’t get me wrong, I’m not placing all of the blame at Beckham’s doorstep. The debacle in Cleveland this year has provided plenty of blame to be shared around, but he needs to own his fair share and be a part of the solution rather than just jumping ship on a quest to find the perfect situation.

Let’s start with the elephant in the room — Baker Mayfield. There is no way of looking at his 2019 season as anything other than a significant disappointment, which is a particular letdown given how high PFF was on him both before the draft and heading into the season. Given all of the data points we had, there was very little reason to expect any kind of regression and, in fact, many of the numbers suggested he was primed for a truly excellent year.

A top-10 QB heading into the season, Mayfield currently sits at 20th in PFF passing grade, behind the likes of Jared Goff and Ryan Fitzpatrick. His accuracy has fallen off, his big-time throw rate has dropped from 7.7% a season ago to just 3.9% this year and he is at the helm of a Browns offense that just can’t seem to get out of its own way.

Mayfield is undoubtedly struggling this season, significantly more than he did a season ago, but he may be receiving a disproportionate amount of the blame. Though his interceptions have spiked this season (he already has three more than his rookie year with two games to play), his turnover-worthy play rate has barely moved (3.1% to 3.3%). That disparity effectively comes down to bad luck and plays outside of Mayfield’s control. Passes that should not be picked off are being hauled in by the defense at a much higher rate than a season ago.

PFF's Mike Renner detailed precisely what has gone wrong for Mayfield this year in this article, but the point of touching on it in this piece is to articulate that, for all his struggles, Mayfield’s numbers are being made look worse by the receiving corps, of which Beckham is the star member.

The most obvious way that Beckham has been a part of letting Mayfield down is in dropped passes. The way we chart drops, by definition, is that every one of these is a pass that should be caught. That doesn’t mean the ball location is perfect, but it means OBJ should have been able to bring it in and improve both the overall production of the offense and his quarterback’s numbers. Every receiver drops the ball sometimes, but not every receiver can say that he made arguably the greatest catch in NFL history the way Beckham can. This is a person whose one-handed warmups and practice catches have become a thing of legend. OBJ finds catching a football as easy as you or I find breathing in and out, so he should have one of the lowest drop rates we have ever seen.

Larry Fitzgerald has six drops over the last three seasons. OBJ has seven and counting this year alone. It’s already the second-highest total of his career and it gives him a drop rate of 9.5% of catchable targets, which is among the worst 10 wideouts in the NFL.

Drops aren’t the only way a receiver can cause passes to fall incomplete, though. Beckham has had multiple targets, even within the same game, that can’t technically be called drops but were incomplete because of his failure to complete the catch. Take the above, which is a perfect sideline pass by Mayfield that drops into Beckham’s hands along the sideline for a huge gain. This is a legitimate big-time throw from the quarterback, and it looks like a clean catch, but replays showed that it took him a couple of attempts to secure; he couldn’t complete possession of the football until after he had stepped out of bounds. These are fine yet critical margins, and they're the difference between Beckham at his best and Beckham in 2019.

When you start adding this type of receiver error into the equation, Beckham’s numbers look even worse. This season, only Michael Gallup has more incompletions due to receiver error. 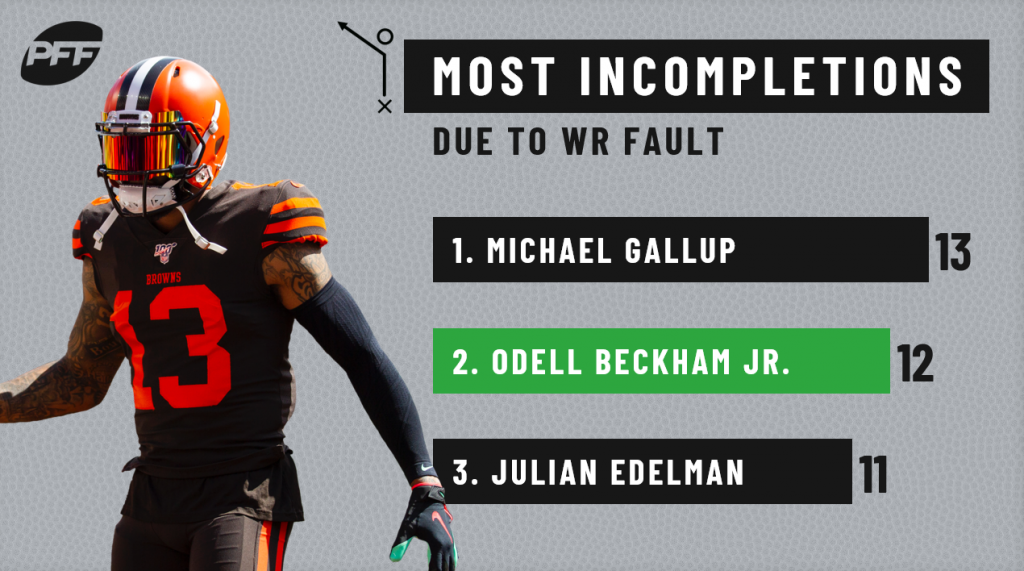 The final aspect that becomes trickier to untangle is simply getting on the same page with Mayfield in terms of timing and route running. There have been five interceptions thrown by Mayfield when targeting Beckham this season and six when throwing in Jarvis Landry’s direction. Those represent two of the highest seven totals among wideouts. Mayfield’s two biggest stars just can’t seem to get on the same page when it comes to being in the right place at the right time. Obviously, this is something that is impossible to navigate in terms of blame, and it may resolve itself over time. Still, it seems incumbent on all three players to work on a fix, rather than to wallow in the results and look for a way out, as some reports suggest Beckham and Landry are doing.

Beckham is also doing less than ever before with the ball in his hands. In every full season of his career before this one, he has broken at least double-digit tackles and has been regarded as one of the best receivers in football after the catch. This season he sits at just six forced missed tackles, and he is averaging the second-fewest yards after the catch per reception of his career. His PFF grade on shorter throws — even ones on which he was charted as ‘open’ in terms of separation — is the lowest of his career. Again, this is not solely his fault; the scheme is far from helping him break open underneath and Mayfield’s inaccuracy this season is not helping him gain yards after the catch, but his baseline is coming from Eli Manning, another quarterback who rarely blessed him with ideal ball location.

The bottom line is that the Cleveland offense this season has been a laundry list of problems that range from the quarterback to the pass protection to the play-calling to the scheme and to the receivers. It’s not hard to imagine why somebody involved in it would just want to get out of the eye of the storm and head to calm waters, but Beckham (and Landry) need to accept their part of the responsibility for what’s happening instead of acting like they are simply the victims of what is happening to them. Odell Beckham Jr. has been reportedly battling a sports hernia all season, so his lack of standout play may simply be injury-driven, but there is little doubt that right now, he is a significant part of the problem for the Browns and not just a casualty of the situation.