How the Buffalo Bills built a winning offense

The Buffalo Bills are in the playoffs for the second time in the last three years. After hanging tight with the defending champs on the road in Week 16, the Bills proved to many that they’re a legit contender or, at the least, a team to be reckoned with in the playoffs.

The Bills’ playoff run has mostly focused on their defense, and for good reason, as our Massey rankings place the unit as the eighth-best in the NFL. But the Bills’ improvement on the offensive side of the ball shouldn’t be ignored. A revamped offensive line has laid the foundation, and even without splitting the numbers for the most favorable perspective, quarterback Josh Allen has improved from being the 26th-ranked quarterback in terms of EPA per dropback to the 18th-ranked quarterback, only slightly lower than Tom Brady and Carson Wentz.

Digging into the changes to the Bills’ offense, you’ll see an intentional plan to build around their young quarterback and shift focus away from who we thought Allen was and towards who he actually is. In this article, we’ll break down exactly how the plan has been executed and explain how the Bills have put themselves in a position to compete with the NFL’s best.

The Buffalo offense, and its passing attack, in particular, was not good last season. Josh Allen had the sixth-worst expected points added (EPA) per dropback, and that number was buoyed significantly by the 44 EPA he generated through scrambles. Looking only at passing, only Josh Rosen generated a lower EPA per pass play last year, and he had one of the worst rookie seasons ever.

The Bills also struggled to run the ball, which makes their wholesale improvement this season that much more impressive. 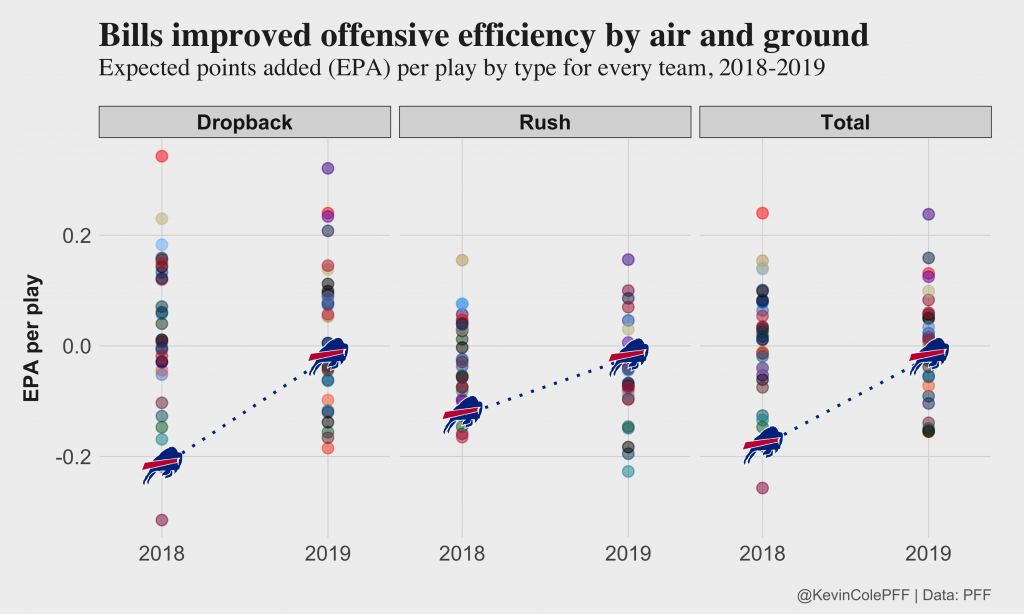 The improvement in the passing game has been bigger than on the ground, but both have led to an overall shift from near the bottom of the NFL to the middle. This isn’t a great Buffalo offense, but it passes the threshold for what’s needed to win if they can dominate on the other side of the ball.

The Bills were big spenders in free agency during the offseason. The press has deservedly given praise for the Bills' additions out wide, especially the new No. 1 receiver John Brown. But the deep investment in the offensive line has been equally as important.

As if that wasn’t enough, they also drafted one of our favorite offensive line prospects, Cody Ford, in the second round of the 2019 NFL Draft. Adding all of these new names alongside third-year tackle Dion Dawkins has solidified the line and added depth to withstand injuries. We shifted our ranking of the unit from the seventh-worst offensive line at the end last season to a solidly mid-tier one entering 2019. 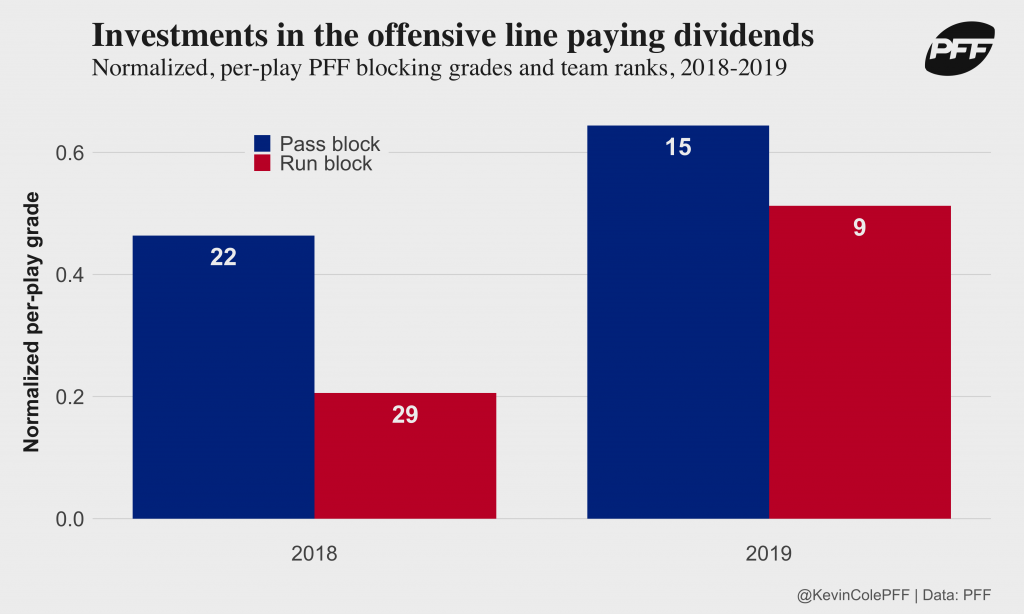 The unit’s play so far this season has been even better than our forecast. As pass blockers, the Bills' average play-by-play grade has moved from a decent 22nd in 2018 to 15th in 2019. And run blocking has taken a tremendous leap from 29th to ninth.

One error along the offensive line can lead to a quarterback sack or negative run play in the backfield. By spreading the wealth along the line, the Bills have a unit that has played well from end to end, giving opponents fewer weak links to exploit.

We saw how the Bills’ dropback efficiency significantly jumped year-over-year, but the reason behind that isn’t what you might think. The improvement isn’t only due to Josh Allen maturing, but it's also due to the concerted effort by Bills offensive coordinator Brian Daboll and his staff to build an offense that enhanced Josh Allen’s real strengths instead of playing into faulty perceptions of how a strong-armed quarterback should operate.

Allen’s prototypical size and cannon-like arm make us associate him with deep passing, and the biggest concerns among draft scouts before he entered the NFL was his low collegiate completion percentage. Many, including us here at PFF, assumed the successful formula for Allen was to replicate what Sean McDermott and Brandon Beane witnessed during their time with the Carolina Panthers during Cam Newton’s 2015 MVP season: build an explosive, downfield offense that produces chunk plays.

But when we look into the characteristics of the Bills' passing scheme last season versus this season using PFF data scientist Timo Riske’s team clustering, you’ll see just how much going away from that aggressive style and towards a shorter passing game has worked for the team. 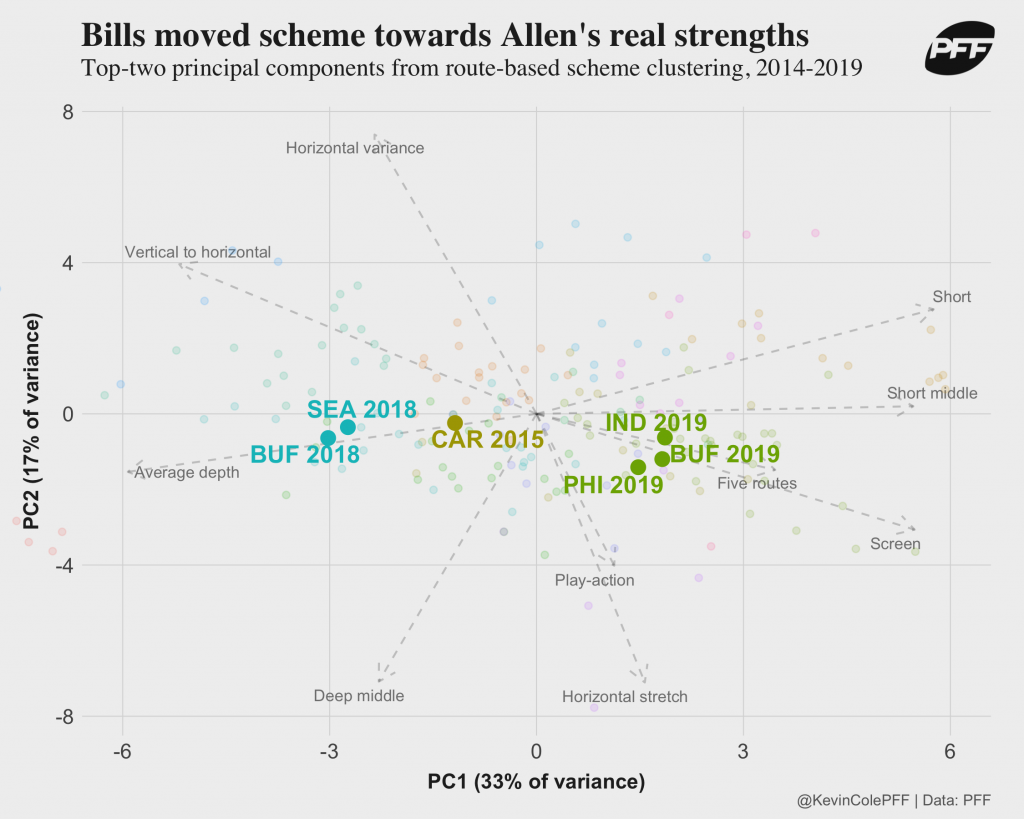 The strongest characteristic in last year’s scheme was average route depth, putting it on the same plane as the 2018 Seattle Seahawks and the aforementioned 2015 Panthers. Offensive coordinator Brian Daboll built a scheme designed to take advantage of Allen’s deep passing; the problem is that making accurate downfield throws hasn’t been Allen’s strength. 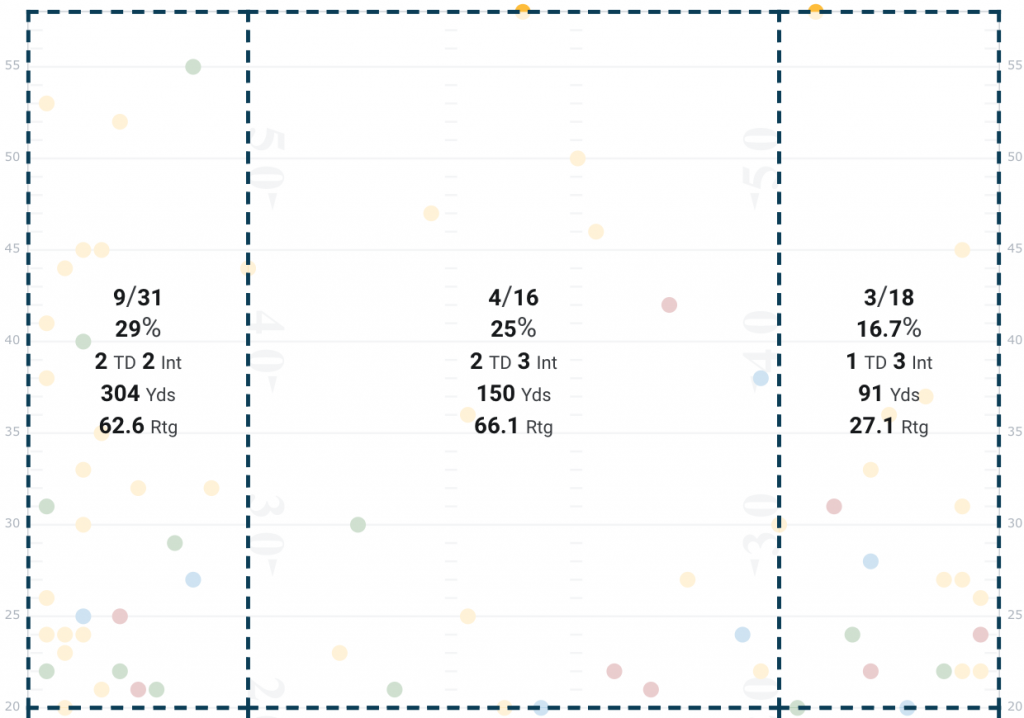 Allen struggled as a rookie in those zones, just as the passing map above shows. Allen completed only 12 of his 49 attempts (24.5%) beyond 20 yards and outside the numbers for three touchdowns and five interceptions. We thought Josh Allen would thrive throwing deep, but he just didn’t last season, and he actually has similar efficiency beyond 20 yards this year.

Where Allen did succeed was in the 0-10 yard range, completing 71 of his 99 attempts (71.7%) for two touchdowns and one interception last year.

That misperception has been corrected this season. Allen is now in a scheme similar to the one of the Eagles or Colts. The characteristics of those schemes are short passes, five-route patterns and screen passes. The Bills’ shift in offensive philosophy is particularly surprising without any year-over-year changes to their quarterback, head coach or offensive coordinator. 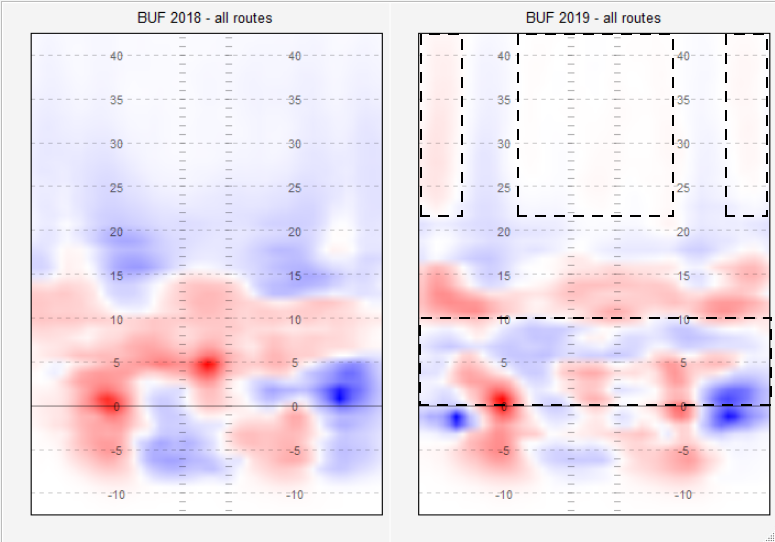 Looking at the route heatmaps from the last two seasons side by side, you’ll see that longer routes in the middle of the field and down the sideline have gone from above league average to at or below average (blue to white or red). And in the 0-10 yard range, where Allen had his best results, red has flipped to blue, giving Allen more opportunities to make successful throws.

Allen still has a tendency to throw beyond the expected target depth based on route distribution, but this year it’s within a normal range of average depth of target (aDOT) as opposed to the outlier number last season. 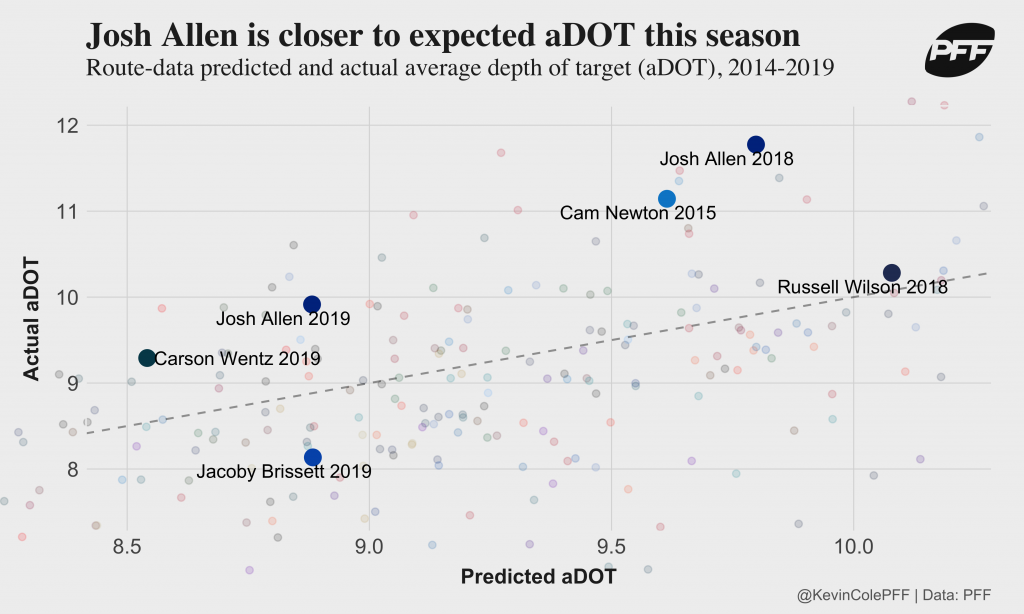 Though they play in a similar scheme, Allen is stretching the field more than Carson Wentz and Jacoby Brissett. Cam Newton was successful in a system like Allen’s last year, but that proved to be more of an outlier for Newton’s career than an example to model on.

The combination of better offensive line play and a passing scheme that discourages Josh Allen from throwing downfield has been instrumental in reducing offensive mistakes. 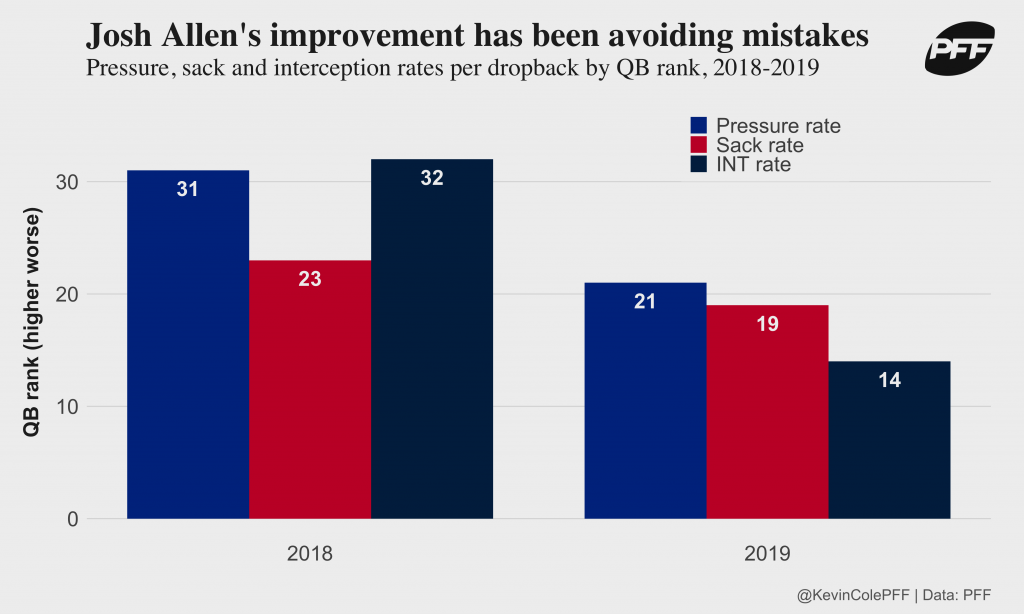 The Bills’ pressure, sack and interception rates have fallen from 31st, 23rd and 32nd, respectively, in 2018 to 21st, 19th and 14th this season. These rate improvements are likely due to the combination of the improvements to the offensive line and the shortening of the passing game to reduce Allen’s average time to throw (3.0 seconds to 2.7).

What the Bills haven’t done is take more off Allen’s plate. His dropbacks per game have risen to 33 per game from 29, and the Bills are passing in game-neutral situations 60% of the time this year (16th-highest) versus 57.5% last season (24th).

The Bills’ front office and coaches, led by Brandon Beane, Sean McDermott and Brian Daboll, have raised the floor with a rebuilt offensive line and new weapons on the outside, and they've crafted the passing scheme to fit with Allen’s strengths. These changes have reduced offensive mistakes, and this more risk-averse offense — combined with a defense playing at a high level — could be enough for a surprise victory, or more, in the playoffs.