The moment you’ve all been waiting for has arrived. The official PFF 2018 offensive line rankings are here, and I’m sure you’ll agree with every ranking. Who am I kidding? You’re not reading this intro, let’s get to it. 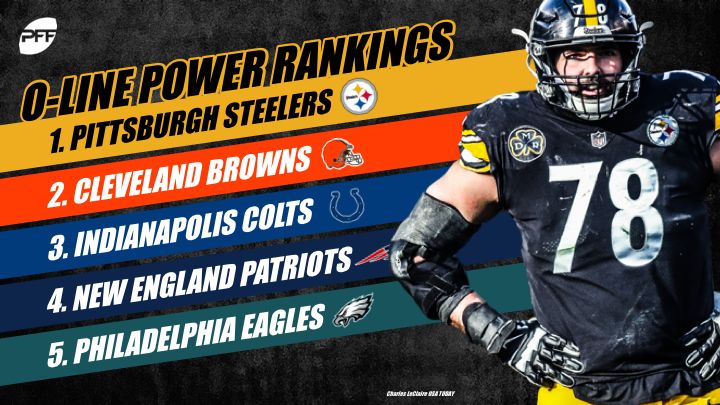 The blame game has run rampant around Pittsburgh after a disappointing season ended. Don’t point fingers anywhere near the offensive line though, as they were dominant down the stretch this season. Their lowest-ranked starter was still only the 61st ranked offensive lineman. That type of cohesion was unmatched around the NFL.

“If you build it they will come” is a saying that doesn’t only apply to baseball fields and baseball-playing ghosts. In the case of the Browns, it also applies to offensive lines and franchise quarterbacks. With high priced free agents at center, right guard, and right tackle, the Browns gelled into one of the league’s top units over the second half of the year. Their interior offensive linemen – left guard Joel Bitonio, center J.C. Tretter, and right guard Kevin Zeitler – combined to give up only 39 total pressures on the season.

We knew they’d be better, but I don’t think even the biggest Colts homer could have foreseen this coming. Drafting the highest-graded rookie guard though and the second-highest-graded rookie tackle will do that. Everyone and their mother predicted Quenton Nelson would be a stud, and he was as a second-team PFF All-Pro, but Braden Smith going from college guard to pro tackle was a wildcard. Fortunately, that card came up aces as Smith was PFF’s 25th-highest graded tackle on the season.

Another year, another well-oiled machine blocking in New England. Shaq Mason finished the season as PFF’s All-Pro right guard and all five starters were among the top-75 graded offensive linemen in the league.

It wasn’t quite the dominant line they had hoped for with Jason Peters back healthy, but it was still easily one of the best units in the league. Jason Kelce was the top overall graded center, while Brandon Brooks and Lane Johnson were top five at their respective positions as well. The almost 37-year-old Peters though didn’t fare as well. His 34 pressures allowed were the second-most of any season in his career, and he didn’t even make it through the full year. 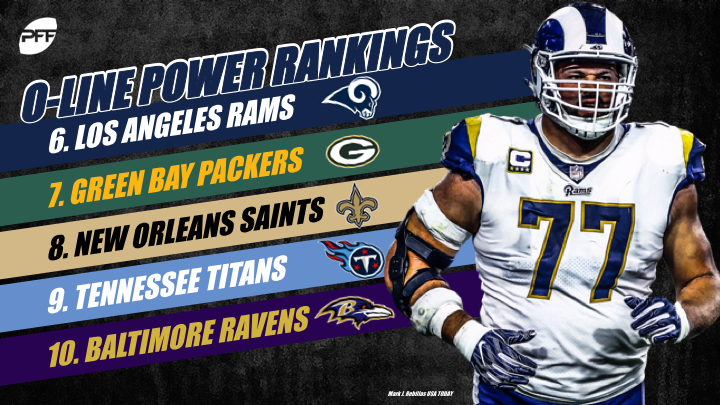 After such a hot start, the Rams offensive line getting exposed over the second half of the season was one of the more significant reasons for their offensive lull. Most notably, center John Sullivan’s play fell off a cliff down the stretch. After allowing four pressures through the first seven games, he allowed 32 over the last nine. Still, it’s one of the few lines in the NFL to have five starters play over 1,000 snaps.

Green Bay had their issues at right guard all season long, but it’s hard to overlook the fact that they sent out the best pass-protecting tackle duo in the league. David Bakhtiari had the highest pass-blocking grade among all tackles while Bryan Bulaga ranked second among right tackles in the NFL this season.

The Saints were similarly built to the Packers this season with two dominant tackles, but they struggled more when injuries struck. None of their starters on the interior had top 80 grades among all linemen, and Jermon Bushrod only earned a 62.2 overall grade in Terron Armstead’s place for much of the year.

This has been a Titans offensive line that has been intact for three years now, but the results have slowly diminished over time instead of improving. A significant portion of that was health, but a few guys took key steps back as well. Right guard Josh Kline didn’t miss time but still struggled to his lowest-graded season as a pro (58.0 overall).

Marshal Yanda’s return and Ronnie Stanley’s emergence as one of the best left tackles in the league fueled this team (and running game) down the stretch. Stanley earned the third-highest pass-protecting grade of any tackle this season, while Yanda was the third-highest graded guard. 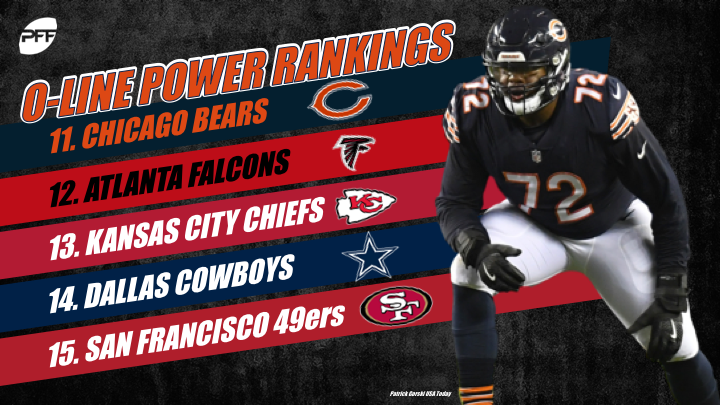 The Bears finished the season with the league’s second-best pass blocking efficiency of any offensive line, and this was yet another team without a real weak link. Rookie James Daniels ended up earning their lowest grade at 62.3 overall, but Charles Leno Jr., Bobby Massie, and Cody Whitehair were all over 70.0.

This was an offensive line that had high hopes coming into this season, but things fell apart quickly. Left guard Andry Levitre was lost for the season and right tackle Ryan Schraeder never quite looked like himself. After allowing eight pressures in week one, he bumbled through his lowest-graded season as a starter before eventually being benched late in the year.

The Chiefs are another team with one of the best tackle duos in the league, as Mitchell Schwartz was PFF’s first-team All-Pro right tackle. Injuries on the interior limited them in a big way this season though. Seven different interior linemen played at least 100 snaps for the Chiefs as no one could stay healthy.

And then there were two. After the 2014 line was so utterly dominant, pieces have fallen off it one-by-one over the years until Tyron Smith and Zack Martin were the only ones left this year. They held up their end of the bargain, but Connor Williams and Joe Looney both earned grades under 60.0 this past season.

An impressive rookie season from Mike McGlinchey (73.2 overall grade) and the ageless Joe Staley (82.2) did a great job of masking some liabilities on the interior. Mike Person and Laken Tomlinson combined to give up as many pressures (65) as their tackle duo while Weston Richburg gave up the third-most pressures of any center (33). 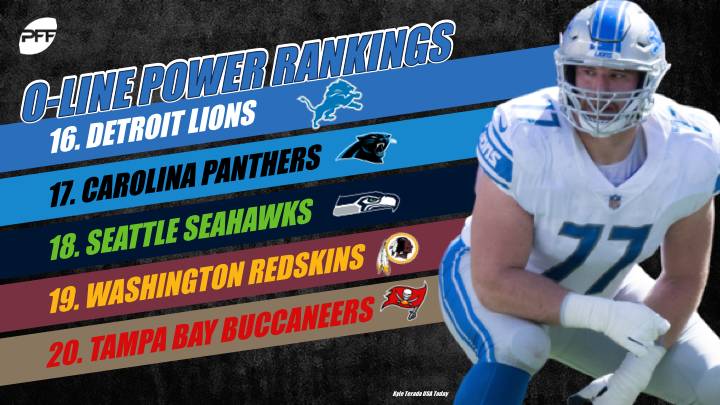 What had the makings of a promising offensive line fell apart fairly quickly in Detroit. T.J. Lang only managed 282 snaps before ending up on IR, while Frank Ragnow was all over the map as a rookie. The Lions' first-rounder ended up with the 10th most pressures allowed of any guard.

After losing both starting tackles in the preseason, things could have gone much, much worse for Carolina. Last year’s second-round pick Taylor Moton ended up becoming a stalwart on the right side. He allowed only four combined sacks and hits all season long.

They finally did it! The Seahawks finished the season ranked 17th in pass-blocking efficiency after finishing 29th a year ago. Having Duane Brown on the blind side for a full year played a big role in that, but they also got a career year from D.J. Fluker, who allowed only nine pressures in 10 games at right guard.

Another year, another injury-riddled nightmare for the Redskins. Nine different offensive linemen played at least 200 snaps for Washington this season, and Ty Nsekhe was the only backup to perform to a decent standard. He’ll be an interesting name in free agency, as the 33-year old backup has consistently been competent filling in at tackle.

There are a lot of negatives we could highlight about Tampa Bay this season, but we’ll focus on the one player who took a big leap forward this season. Ali Marpet moved back to guard and had a career year. He was the fourth-highest graded left guard in the NFL this season after struggling with his transition to center a year ago. 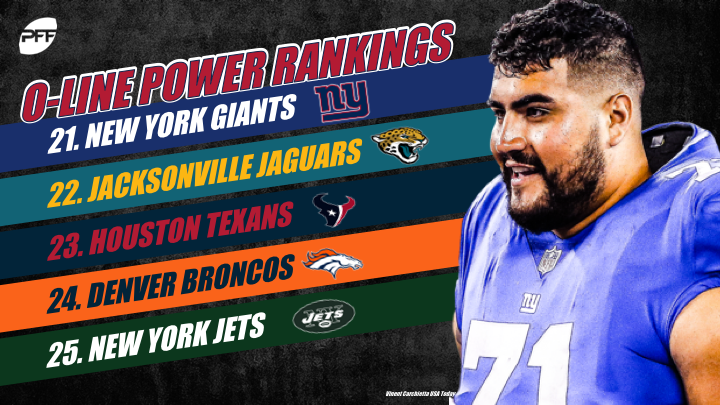 At the midway point in the season, it looked as if the Giants had flushed their money down the proverbial drain with left tackle Nate Solder. He’d allowed six sacks and 20 total pressures through the first eight games. However, he rebounded in a big way over the second half of the year, allowing only one sack and 13 total pressures.

It’s a shame we didn’t get to see this offensive line at full strength for too long. Left tackle Cam Robinson didn’t allow a single pressure in Week 1 after leading the league a season ago. He only managed eight snaps against New England in Week 2 though before going on IR. Josh Walker and Ereck Flowers would combine to give up 60 pressures filling in at tackle this season.

While the tackle position was still very much an issue for Houston, Zach Fulton and a healthy Nick Martin brought some competency to their pass blocking. Fulton earned a 79.1 pass-blocking grade on the season while Martin was at 80.9.

This line dominated at times when fully healthy, but once injuries struck, they had no answer. Their two best starters, Ronald Leary and Matt Paradis, both ended the season on IR. While third-year starter Connor McGovern looked competent at guard, he was a nightmare at center. He allowed 22 pressures in eight games at center filling in for Paradis.

Heading into 2018, the Jets line was a fairly well-known commodity. It was a veteran line with a lot of veterans that had just never been good. At the end of 2018, they met expectations. Kelvin Beachum was their highest graded player with only a 66.0 overall grade. 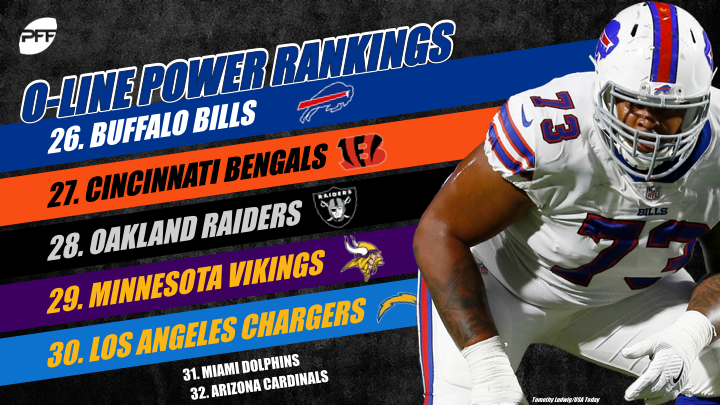 Very similar to the Jets, there wasn’t much to get excited about with the offensive line in the preseason and their end of year ranking reflects that. If there was one silver lining, it’s that rookie guard Wyatt Teller only allowed eight pressures in his eight games this year.

Cordy Glenn and Billy Price were supposed to come in and fix the Bengals' reeling offensive line this season, but both came in and fell victim to what might be a cursed unit. Glenn had the lowest-graded season of his career at 60.9 overall, and he gave up a career-high 36 pressures. Price didn’t fare any better with a 49.4 overall grade in a season marred with injury.

This was an offensive line that was a top-5 unit as recently as two years ago. Kelechi Osemele inexplicably fell off a cliff though with a 53.8 overall grade this season, and the Raiders' offensive tackles were a nightmare. Rookies Kolton Miller and Brandon Parker combined to allow 26 sacks and had 19 penalties between them.

Outside of left tackle Riley Reiff – who himself had some ugly outings, most notably Buffalo – the Vikings didn’t have a single offensive lineman with a top-80 grade this season. Their interior was quite easily one of the worst in the league. Tom Compton, Pat Elflein, and Mike Remmers combined to give up 18 sacks on the season.

The Chargers' offensive line improvement has been vastly overblown. They still employ the lowest-graded guard and lowest tackle in pass protection this season. Left guard Dan Feeney has allowed eight sacks and eight more hits, while right tackle Sam Tevi has given up eight sacks and 12 hits.

What started as a season with some promise turned into the same old Dolphins interior offensive line. It certainly didn’t help that injuries took a huge toll, with only Jesse Davis playing 900 snaps, but even some of the penciled starters got routinely worked. After Josh Sitton went down, Jesse Davis, Ted Larsen, and Travis Swanson combined to allow 98 pressures on the interior.

The Cardinals' offensive line was in shambles when fully healthy, so it didn’t help that only rookie center Mason Cole was able to stay healthy for more than 600 snaps this season. 11 different offensive linemen played at least 100 snaps for the Cardinals this season, and not a single one played well. Quarterback Josh Rosen didn’t have a chance.