Teams are entering the first phase of offseason roster building, deciding whether to extend their own players, apply franchise or transition tags, and whom to pursue when free agency starts in another month. We’ve recently provided analysis of the most important players to extend on offense and defense, have free-agent rankings by position, and published multiple versions of our 2020 draft guide. The macro question for roster building is how to use the three primary levers of talent acquisition and retention (draft, extension and free agency) in harmony to provide the most benefit in terms of the ultimate denominator: wins.

How teams pull these levers, while staying under the salary cap, is determined by need, front office preferences and, at least in part, by luck. If a team doesn’t hit on its draft picks, it’s hard to find worthwhile players to extend, and the vacuum must then be filled in free agency.

[Editor's note: Available to all of PFF's EDGE and ELITE subscribers, PFF's Free Agent Rankings Page consists of three-year grades, PFF WAR and in-depth analysis for all of the top NFL free agents. Contract information from our friends at Over The Cap is also available. Subscribe today for access!]

Traditionally, free agency has been the most costly avenue for buying wins overall. But we shouldn’t assume all positional units provide value via free agency equally. The assessment of the individual player is paramount in making spending decisions, but looking at league-wide trends by position can provide useful context for edge cases and negotiations. With the combination of PFF’s wins above replacement (WAR) and contract values from Over The Cap, we compare how different levels of spending in free agency, extensions and the draft have affected the value derived for different positional units.

Each plot below shows the designated positional unit, with the seasonal percentage of cap spent on the x-axis and the total WAR for the unit on the y-axis. For each contract type, there are 224 data points: 32 teams times seven years (since 2013). 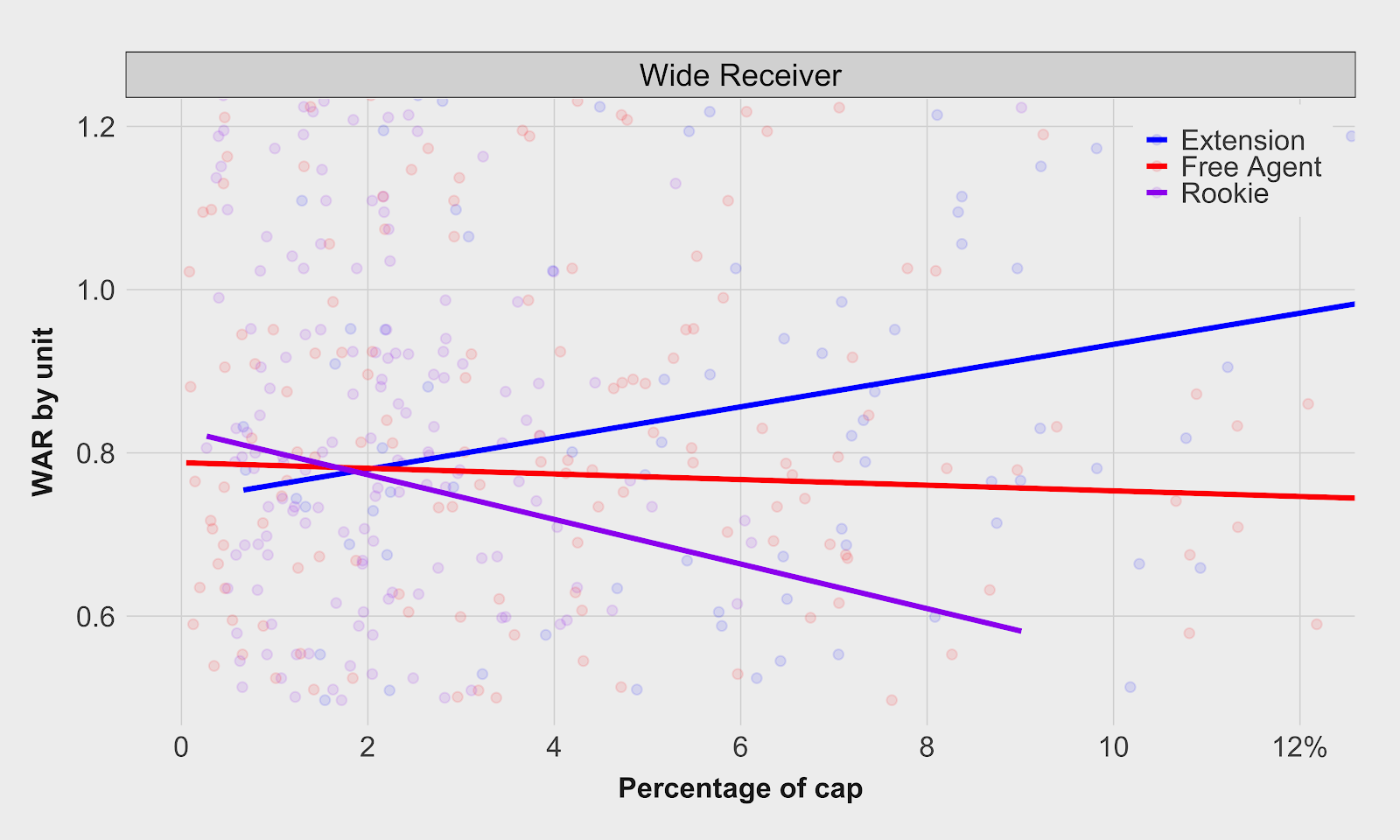 Wide receivers generally provide the most WAR of any offensive unit outside of quarterback and are also second in average cap spent per player.

The wide receiver trend lines for extensions, free agents and rookie cap spending have well-defined slopes as cap spending increases. Spending higher allocations of cap on rookie contracts has generally been negative. Receivers can take longer than other positions to post meaningful production. Plus, the trend is influenced by the combination of exponentially increasing contract values for top picks and the large number of high-profile draft busts in recent years.

While high-priced rookies haven’t been particularly valuable, high-priced extensions have been a wise allocation of salary cap. It’s a bit of an oxymoron that rookie contracts haven’t been valued, but extension of these same rookies have been strong values. This could be that finding a gem at the position isn’t as simple as drafting one early, but rather getting looks at enough and getting lucky. 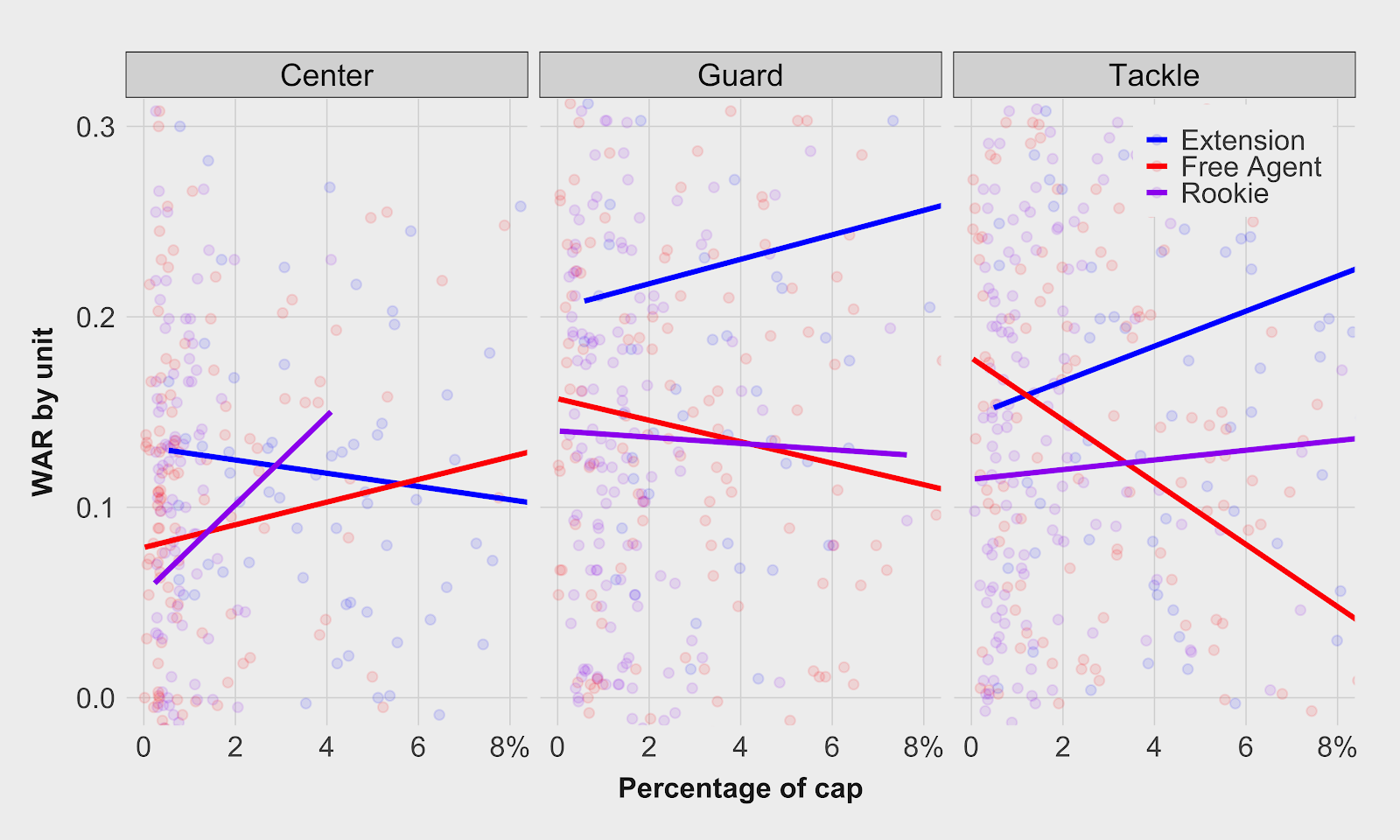 Guards and tackles show the generally assumed relationship of contract spending and value, with extension-dominant units having the best value and free agency spending being most detrimental.

Those trends are more pronounced at tackle, with teams that spend the most in free agency at the position having dramatically worse positional WAR, while those with more high-value spending in the draft showing a positive WAR trend. The trend lines point strongly to tackle as a position that teams need to address in the draft and not be left to fight for lesser players in free agency.

Center has the lowest spending of any offensive line position and shows some relative value in free agency. If you are going shopping in free agency, center might be a position to target. 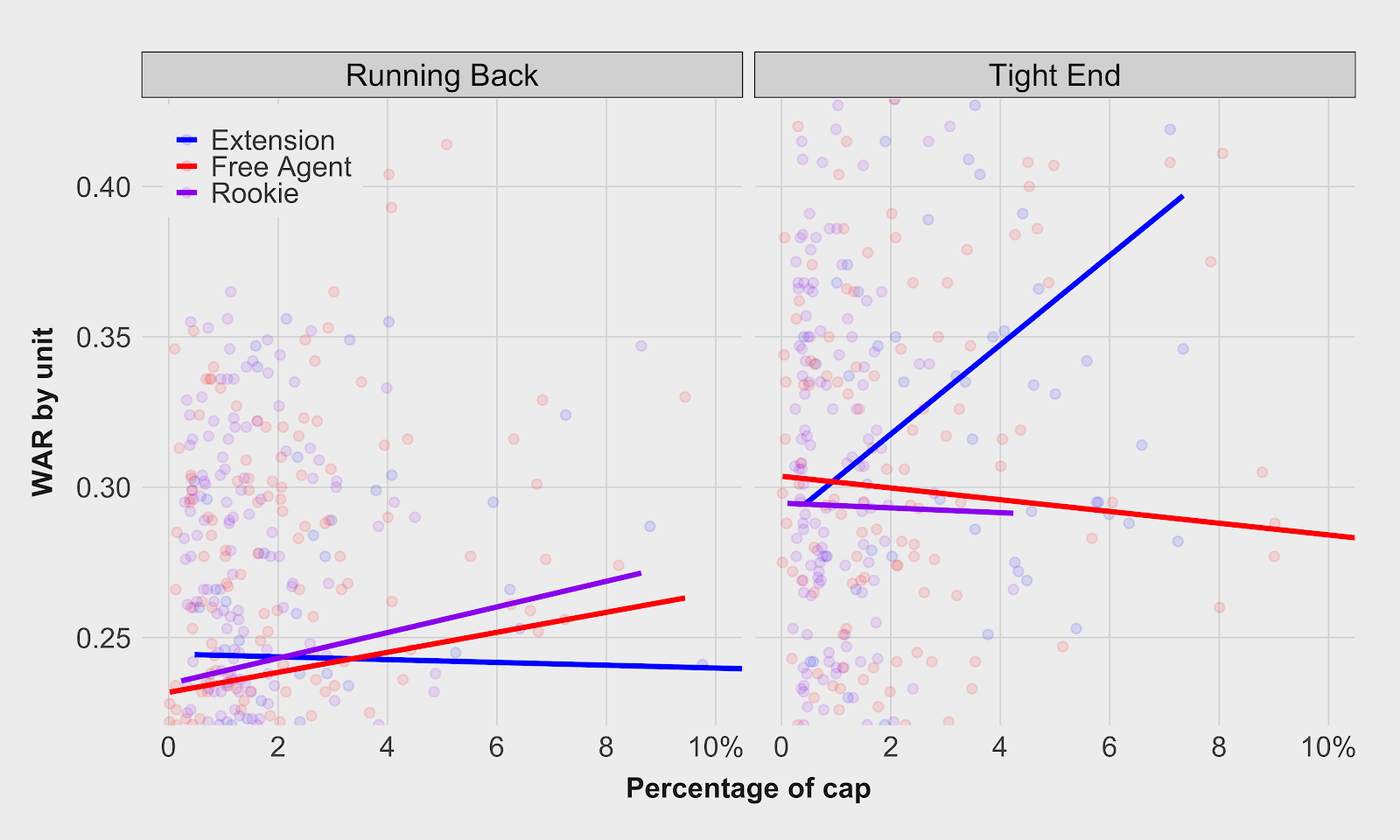 Running backs show the lowest variation in performance by contract type and are an anomaly in extensions providing such little value and rookie contracts leading the way. The general wisdom that you should avoid extending generational talents at running back is backed by the numbers.

Tight ends aren’t quite on the level of wide receivers in terms of WAR generation, but being another cog of downfield pass production produces numbers favorable in comparison to the other offensive positions. Extensions have the steepest slope for value at tight end; If you have a great tight end, you shouldn’t hesitate to extend him. The biggest tight end contracts pale in comparison to those for wide receivers, and even those for running backs. As long as the tight end market is undervalued and the franchise tag remains dirt cheap, it’s unlikely we’ll see any stud at the position make it to free agency.