The young offensive players most deserving of an early contract extension

Yesterday, we discussed defensive players from the 2017 NFL Draft class deserving of an extension this offseason. In this article, we will continue with the offensive side of the ball, highlighting offensive players who deserve to be extended after playing three years in the NFL.

When a team has to decide whether to extend a player after three years, the main question is to balance between the advantage of signing the player under a potentially team-friendlier contract and the disadvantage of not having another year to evaluate that player. This is why confidence and the distribution of future outcomes should be major factors in the decision. Regular readers already know that our go-to method to quantify these two things is a Bayesian approach. In short, the forecast of what a player might be able to contribute in the future isn’t given by a point estimate but rather by a distribution, dependent on a posterior mean and a posterior standard deviation. The proximity of the posterior mean to the actual observed results in the first three years is dependent on the sample size (a three-year player who has contributed since day one of his rookie year inspires more confidence than a player who didn’t start before year two), but also the consistency of his performance (an up-and-down player will have a larger range of outcomes than a consistently good player).

The second method we will use comes from the work of our own Kevin Cole, who has created a framework to predict the range of possible outcomes in terms of PFF WAR (wins above replacement) for a player based on comparisons to historical players. Additionally, he has laid the foundation to translate such a forecast into a suggested salary. Kevin has already started a series on assessing the value of free agents, and this article presents an opportunity to apply it to younger players.

What is there still to say about the reigning Super Bowl MVP? Before you’ll get to see the Bayesian updating for Mahomes, here are two facts about the start of his career.

Mahomes’ Bayesian forecast is currently in the 98th percentile among quarterbacks, and his floor is well in the 90th percentile — an absurdly high figure. 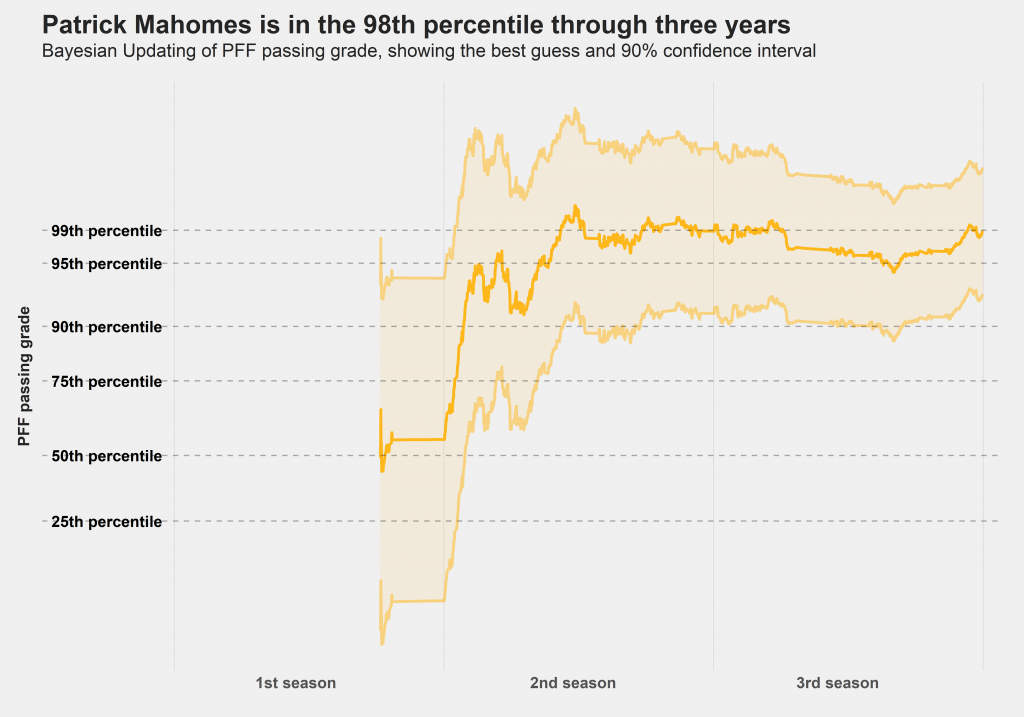 Comparing Mahomes to other quarterbacks drafted since 2006 through their first three seasons, only Russell Wilson had a similar start to his career. 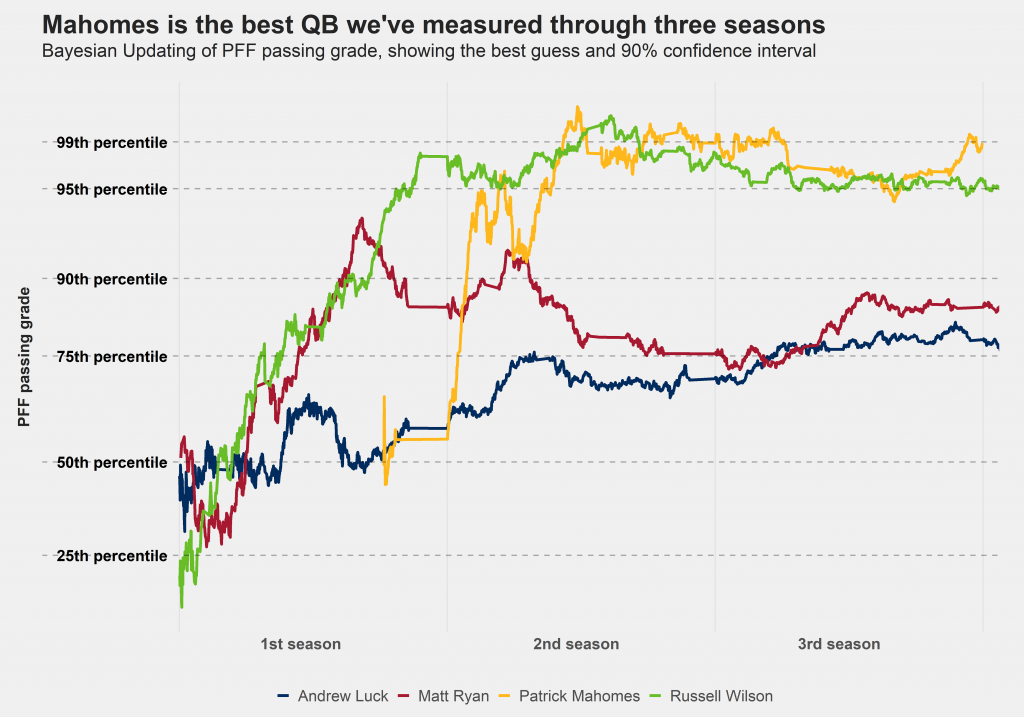 Ramczyk and Moton are bundled into one section because they play the same position, but they have more in common: Both were selected with the last pick in their respective rounds and both have been drafted into the NFC South. The major difference between them is that unlike Ramczyk, Moton might fly under the radar while Ramczyk has grown popular playing for a team that has won 37 regular-season games in his three years in the league.

Both have a similar pass-blocking grade since joining the league (82.6 for Moton and 82.2 for Ramczyk), though Ramczyk has lined up as a pass blocker 400 times more often. Ramczyk has clearly been the better run blocker, as his 89.5 run-blocking grade leads all offensive tackles since 2017. Moton has performed at an average level when blocking for his running back, posting a 64.8 run-blocking grade. So, it’s not surprising Ramczyk has the higher WAR forecast. 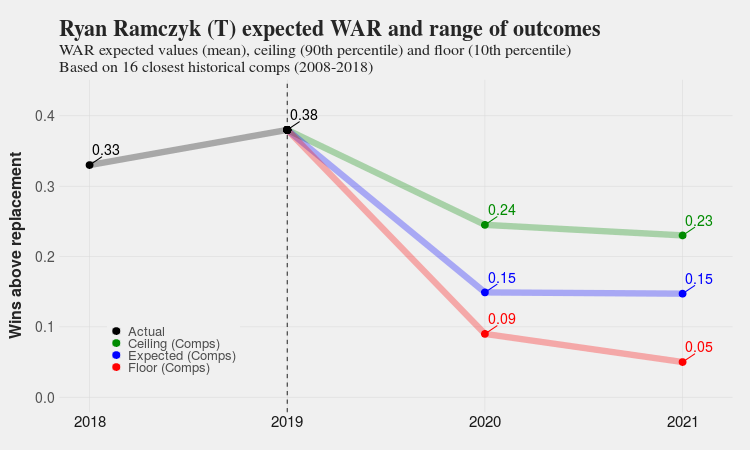 Interestingly, even Ramczyk’s ceiling isn’t at the level he has shown in the past two seasons, indicating that it has been historically rare for an offensive tackle to excel at pass and run blocking on this level. Because of the expected regression for Ramczyk, Moton isn’t forecasted to be at a much lower level because he has some room for improvement. 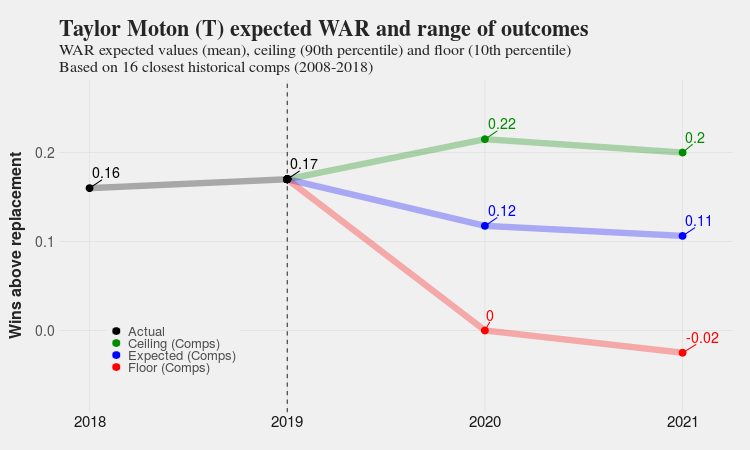 This could potentially yield an interesting situation in which Ramczyk, who has been the better player so far, might be overpaid compared to Moton. Nevertheless, we believe the Saints wouldn’t do wrong if they extended Ramczyk, especially if they can do it before the market value gap between right tackles and left tackles finally closes completely, something that will surely happen soon, as the contract of Lane Johnson ($18M APY) indicated.

WAR numbers for good offensive linemen are generally lower than those of good wide receivers, so the suggested salary numbers are fairly low and it wouldn’t be surprising if both get higher contracts. For Ramczyk, it can probably be considered a lock. 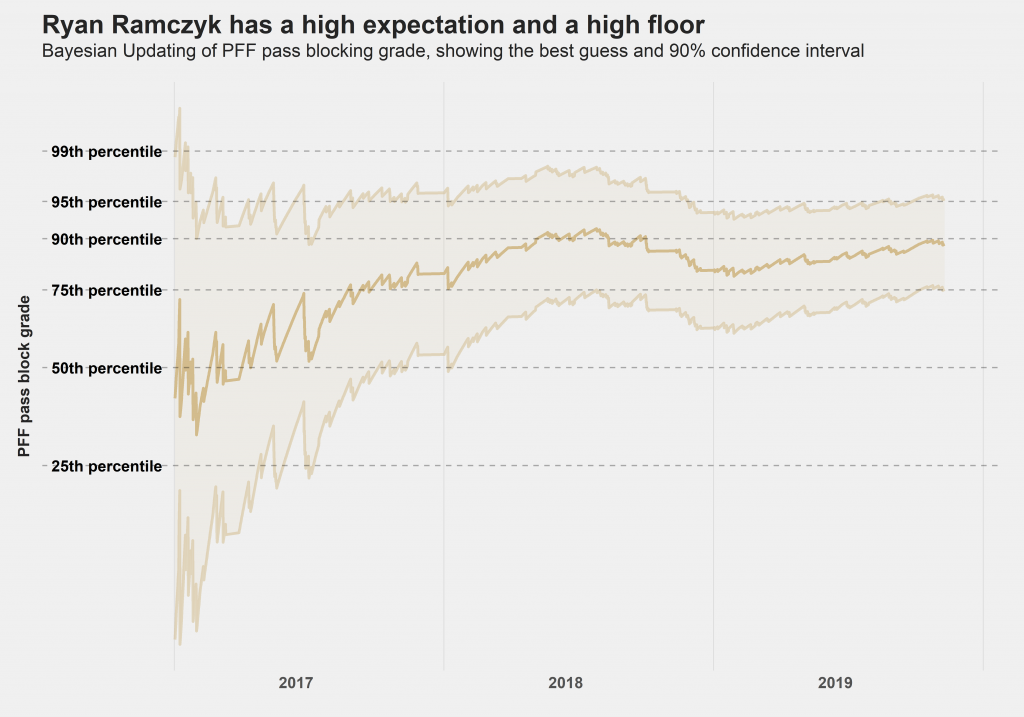 Just as for their defensive counterpart on the line of scrimmage, our offensive line grades are very stable, and consequently, there is little doubt Ramczyk is very good in pass protection. His floor lies in the 75th percentile among offensive tackles. Moton looks even more impressive in pass protection, making up for his deficits in run blocking. 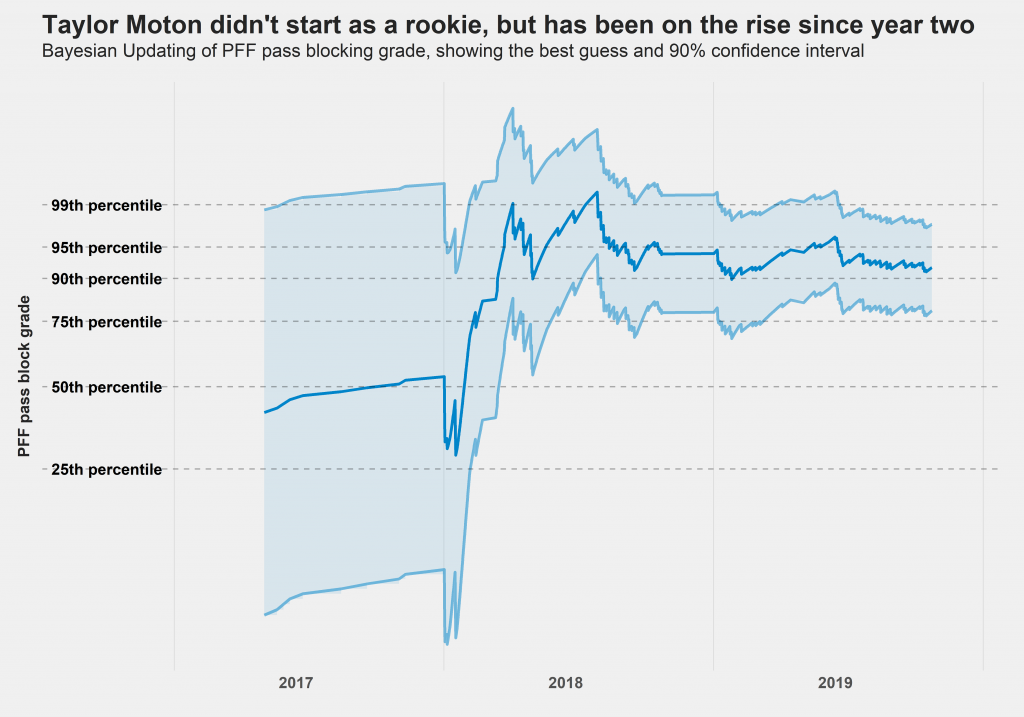 The Panthers are well advised to extend their right tackle before the league realizes his potential on the 2021 free agency market.

The 2017 draft featured three prominent wide receivers going off the board within the first 10 picks, but it was a quartet of wide receivers selected in the second and third round that made it one of the best wideout classes of the decade. JuJu Smith-Schuster (62nd overall, Pittsburgh Steelers), Cooper Kupp (69th overall, Los Angeles Rams), Chris Godwin (84th overall, Tampa Bay Buccaneers) and Kenny Golladay (96th overall, Detroit Lions) have all contributed to their respective offenses in a major way, and their teams should consider locking them up instead of taking the risk of letting them walk. Godwin has separated from the pack through his strong 2019 season, and his 90.5 receiving grade since 2017 ranks sixth among all wide receivers. Golladay and Kupp rank tied 16th in the same timeframe with a grade of 82.8, and Smith-Schuster ranks 27th (79.9 receiving grade) after an underwhelming 2019 campaign. 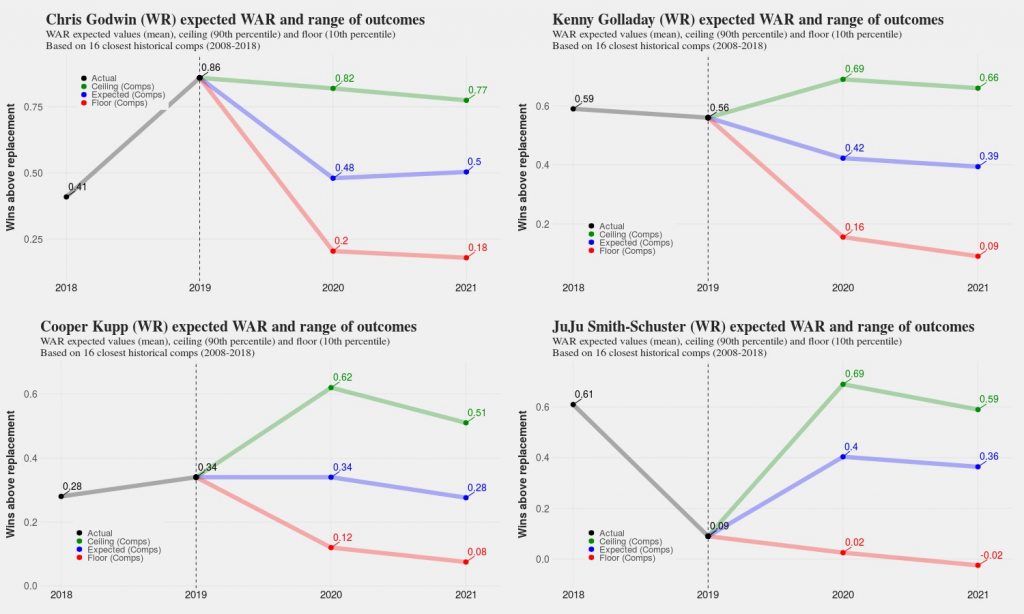 We played around with the features (which finding historical comparisons are based on) to give JuJu a pass for catching throws from Mason Rudolph and Devlin Hodges and found a similar forecast for him than for Golladay. Godwin has clearly separated himself, and Kupp is forecasted to be a step below. The Bayesian forecast for their receiving grades paints a similar picture. Godwin is expected to be in the 95th percentile and has a very high floor, Golladay finds himself just below the 90th percentile — a level Kupp and Smith-Schuster have already flirted with before regressing toward the 80th percentile. Unlike their counterparts on the defensive side, grades for receivers are fairly stable, and thus we can expect a fairly high floor for all four of the aforementioned players, a good reason for their teams to lock them up for the future. 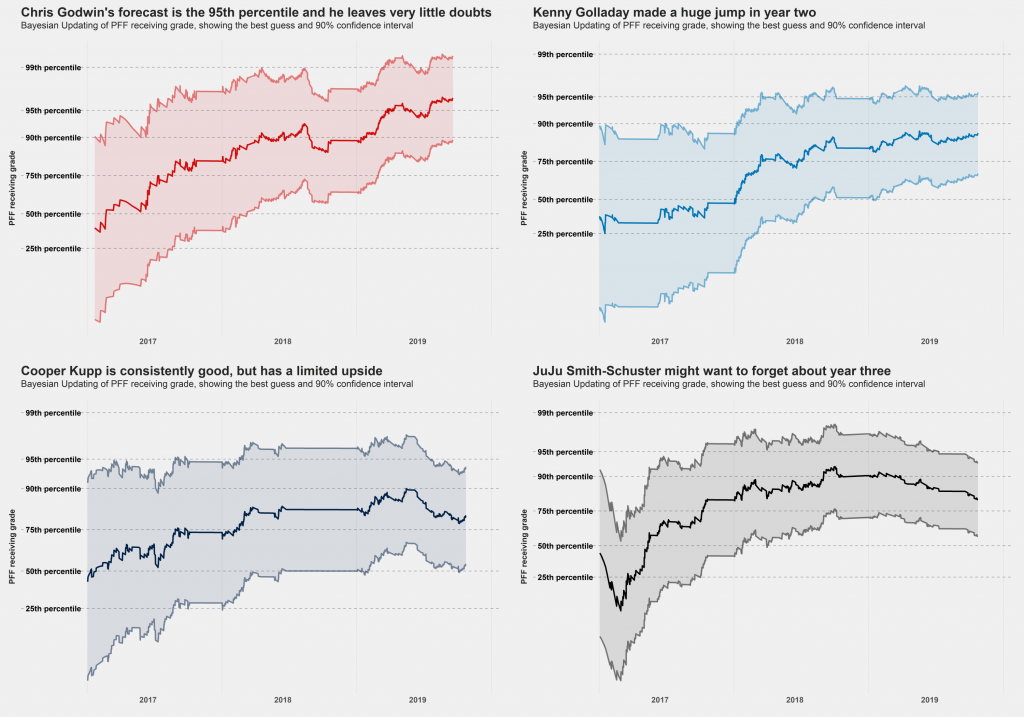 Since WAR numbers for receivers are generally very high (and stable), the suggested salaries are much higher than their market value would suggest, so their teams could keep valuable players for fairly minimal contracts.

WAR and salary forecast for Smith-Schuster, Kupp, Godwin and Golladay

Since we are comparing four players of the same position, it’s a natural question to ask how they will stack up going forward. For that matter, we ran 100,000 simulations based on their posterior distributions.

Godwin has done enough to come up with the top spot 86.4% of the time, while Smith-Schuster’s upside seems to be gone. However, if we give him a pass for his bad third season — that is, we use his forecast after the 2018 season — we find a more favorable forecast for him: Running the same simulation while changing only Smith-Schuster’s distribution to what it looked like after Year 2, we find that he would end up as the best in the group 8.9% of the time and would likely be the second best of the group.

Kittle, a fifth-round pick, has broken the yards per route run record for tight ends twice in a row, and his 92.5 receiving grade since 2017 bests Travis Kelce (91.6) for the best figure of all tight ends. He isn’t a bad run blocker, either — only Maxx Williams and Dallas Goedert have impressed us more in the run game among qualifying tight ends. His pass-blocking ability could use some improvement (55.3 pass-blocking grade), but the 49ers are better off sending him into a route pattern, anyway. His impressive play leaves very little doubt he deserves an extension, and the Bayesian forecast of his receiving grade confirms just this. 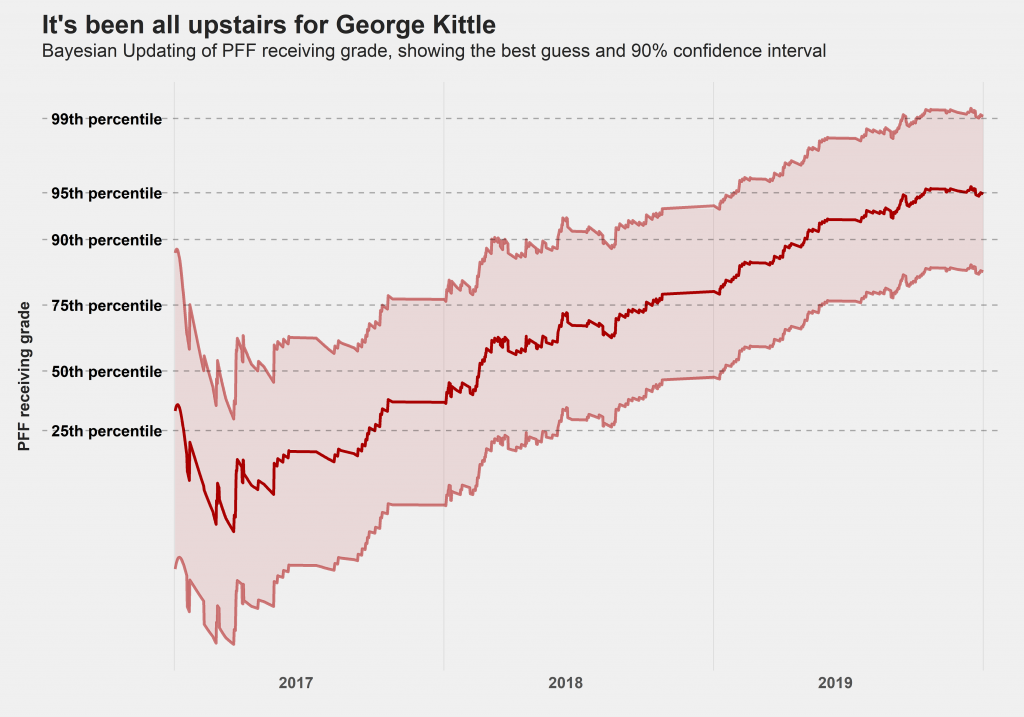 While most players have some ups and downs, or at least plateau at some point in their development, Kittle has been trending only upward since the second half his rookie season. We should note the percentiles are among wide receivers and tight ends, so he doesn’t shy away from the comparison to the “specialists,” fitting in just between Godwin and Golladay. However, in terms of wins above replacement, his forecast is not as high as the best wide receivers, mostly because of the relatively low aDoT of tight ends. 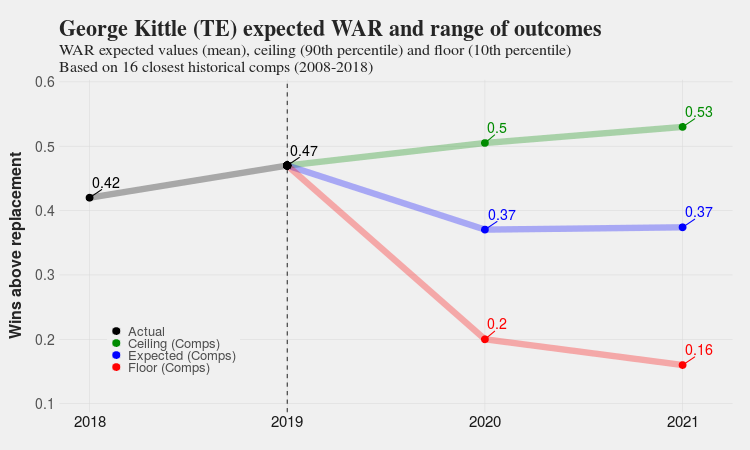 He is still projected to average 0.37 WAR over the next two years, a very high number, and consequently his suggested salary is high, too. Given the relatively low market for tight ends, he has, of course, no chance of getting such a high salary, but it’s a guarantee he will set the market for tight ends sooner or later.