Nick Chubb‘s contract extension adds an exclamation point to what is now a completely new market for NFL running backs.

The Cleveland Browns are signing Chubb to a three-year, $36.6 million contract extension with $20 million in guarantees, per NFL Network's Ian Rapoport. The total guarantees figure ranks fifth at the position, and the $12.2 million average per year ranks sixth. He enters the 2021 NFL season as PFF’s fourth-ranked running back and ranks second behind Tennessee Titans’ Derrick Henry in PFF grade (91.7) since 2019.

Chubb is an analytical darling as far as running backs go. His forced missed tackle and yards after contact numbers are both among the best in football. 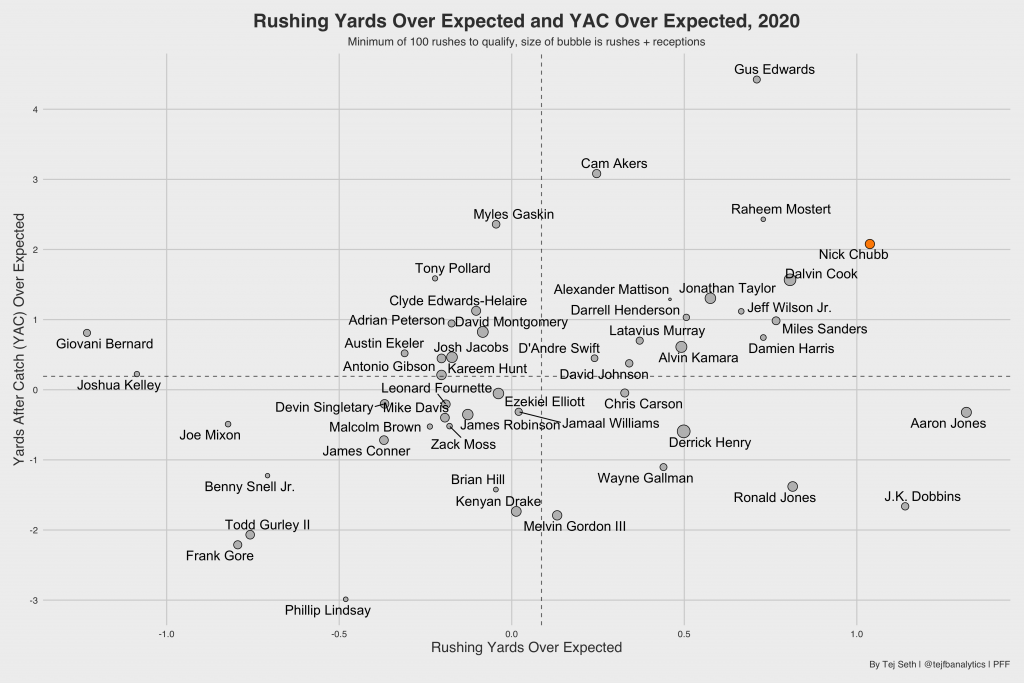 “There may be no better pure ball carrier in the NFL than Chubb, and only a relative lack of impact in the passing game keeps him as low as No. 4 overall,” per PFF Senior Analyst Sam Monson. “The Georgia product has the best broken tackle rate in the NFL over the last two seasons, with 124 broken tackles on 488 carries.”

Chubb’s deal is the latest in a string of contracts that pretty clearly evidence a market reset at running back.

Former Los Angeles Rams running back Todd Gurley II pushed the market to astronomic heights. Ezekiel Elliott and Christian McCaffrey moved it even higher, but it’s been in a steady free-fall ever since.

Chubb earning just shy of 55% of the contract in total guarantees is an obvious win for his camp. The superstar back will also be eligible for a potential early extension at 28 years old and can enter free agency at 29, keeping open the possibility of another multi-year contract.

Cleveland’s brass also benefits massively by avoiding overpaying at the running back position, a win likely driven home by the analytics gurus in the front office.

General manager Andrew Berry and chief strategy officer Paul DePodesta lead one of the NFL’s most analytically minded front offices in sports. Vice president of football operations Kwesi Adofo-Mensah previously worked as the vice president of research and development with the San Francisco 49ers and earned his master’s in economics from Stanford. Berry, DePodesta and Adofo-Mensah lead an NFL-high nine-person analytics department.

With Chubb locked up in a win-win contract, Berry & Co. can pivot focus to looming contract extension negotiations with quarterback Baker Mayfield. The 2018 No. 1 overall pick has two years remaining on his rookie contract after the Browns decided to pick up his fifth-year option this offseason.

Mayfield landed 10th on PFF’s preseason quarterback rankings entering the 2021 NFL season. The 26-year-old signal-caller is coming off a career year under head coach Kevin Stefanski, where he finished eighth among qualifying quarterbacks in PFF grade (85.7).

An extension would continue the recent trend of teams locking up their franchise quarterbacks following their third season, and Mayfield’s deal has a good shot to come in around $40 million per year.