Repeatability is a valuable skill in fantasy football. Monster seasons from Marcedes Lewis in 2010 or Gary Barnidge in 2015 were great for the fantasy owners who snagged them off the waiver wire, but for players in dynasty or keeper leagues, they ended up causing at least as many headaches in the following years as they did triumph in their winning year, and for people who bought in on their breakouts, they quickly became disappointments.

We’re running through a look at how repeatable top-flight fantasy performances are at each position and what trends have developed over recent history. We looked at repeatability among the top quarterbacks and top running backs last week and top wide receivers earlier this week. Today: Tight ends. 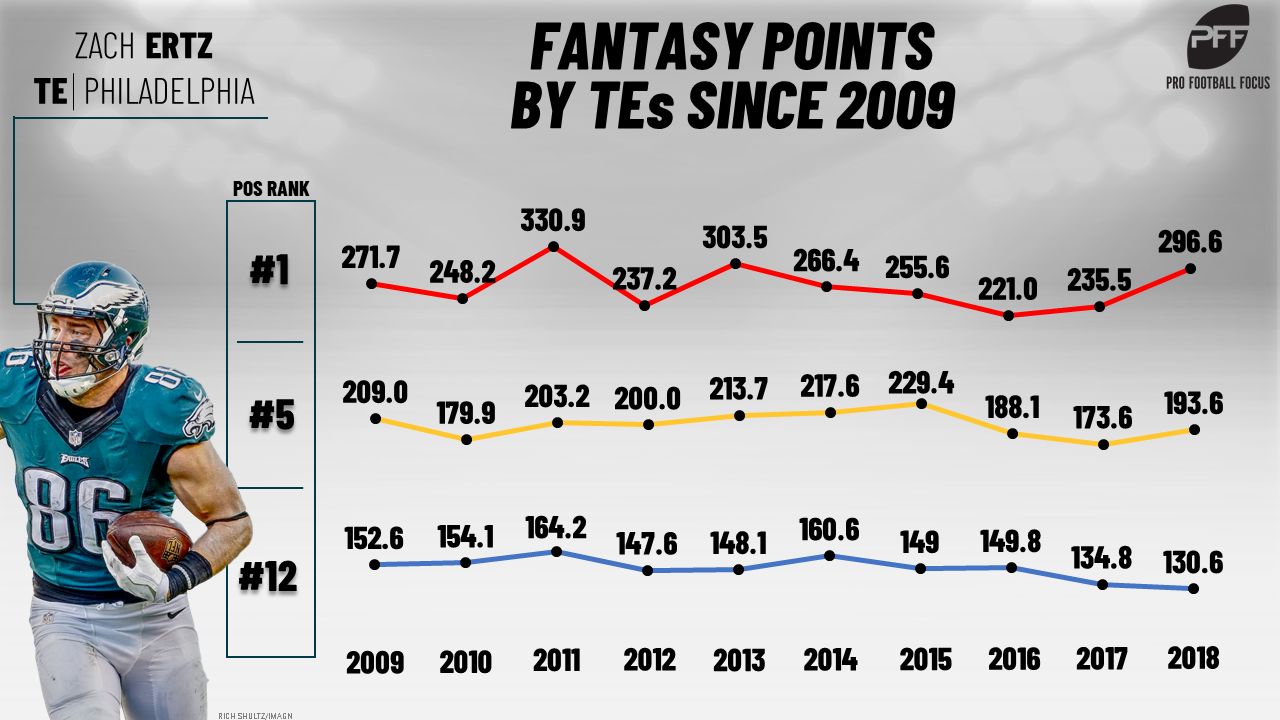 As I mentioned in Wednesday’s piece on the candidates to lead tight ends in scoring in 2019, the top of the heap in tight end scoring has been very volatile in recent years, thanks in large part to question marks surrounding Rob Gronkowski’s health. At his best (2011), he was setting TE scoring records (330.9 points). But when he wasn’t at his best and players like Travis Kelce were not yet at their peak, the top tight end score was more than 100 points lower (221.0 in 2016). So predicting how many points the No. 1 tight end might score is a difficult task.

All the other fantasy positions displayed at least some sort of trend in repeatability, either in the position’s top-five or top-12, that could help us draw some sort of conclusion. That’s not really true among tight ends, as the numbers of repeaters from one year to the next bounced around pretty steadily. The closest thing to a trend — in the top-five, there were two-plus repeaters a year three times in four two-year samples from 2009-2010 to 2012-2013, including three repeaters twice. Since then, there has never been more than two repeaters, and only one three times. So there is slightly more changeover from one year to the next in recent years, but even that is a small change. In the top-12, there have been six or seven repeaters in seven of our nine two-year samples. 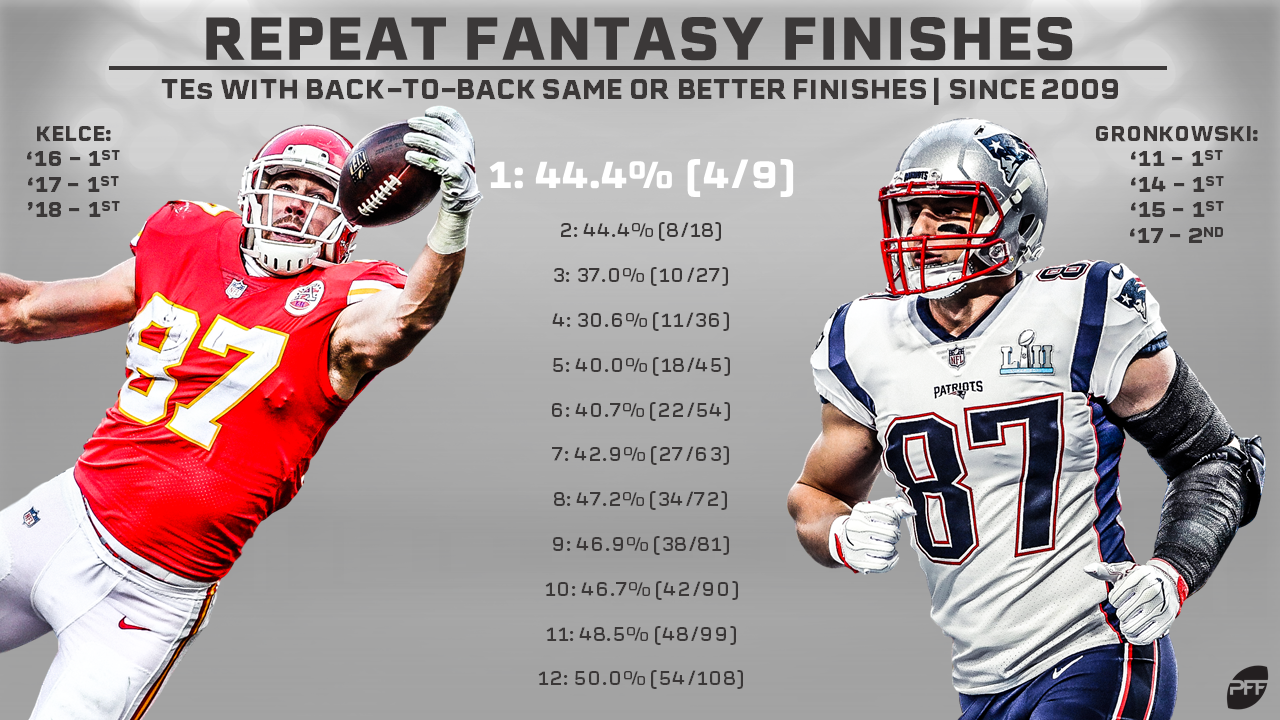 Tight end is marked by dominant performances at the top — four of nine (44.4%) No. 1 tight ends have finished as No. 1 the next year in the last decade, and eight of 18 (44.4% again) top-two finishers have done that again. After a little falloff in the rest of the top-five (only 11/36, 30.6%, of top-four finishers get back there), the rest of the tight end position holds largely steady, with between 40 and 50% of finishers repeating at every slot between TE5 and TE12. In short, you have about a 50/50 shot, maybe slightly lower, of your elite tight end one year being an elite tight end again the next.

If you assume half of last year’s top-12 tight ends will be in the top-12 again in 2019 (that’s exactly the rate over the last decade), then we have six names from 2018 to cross off the list. We’ll start with the relative locks and go from there. Assuming health, Kelce, Zach Ertz, and George Kittle are virtual sure things to show up in the top-12 again. And of course, Gronkowski is retired, so he’s fairly sure to fall off.

That leaves us with eight names to fill three top-12 spots again. Eric Ebron and Jared Cook, last year’s Nos. 4 and 5 finishers, don’t have quite the same odds in 2019 (Ebron will again have Jack Doyle to contend with, while Cook moves to New Orleans), but you’d probably still select them — they could fall off by 70-90 points and still have made it in 2018. That leaves Austin Hooper, Kyle Rudolph, Trey Burton, David Njoku, Vance McDonald, and Jimmy Graham for the last top-12 spot. Rudolph’s role is shrinking in Minnesota, Njoku is one of many mouths to feed in Cleveland, Graham has been on the downhill slope, and McDonald has yet to prove he can stay healthy.

That leaves Hooper and Burton. You can just about flip a coin here, but I’ll opt for Burton. Developments out of Calvin Ridley could reduce Hooper’s target share, while Burton has a safer role with Chicago. Really, though, that’s a guess, and if you went with Hooper (or Njoku or McDonald) I wouldn’t fight hard. It’s mostly a testament to how unexciting the second and third tier at tight end are right now.