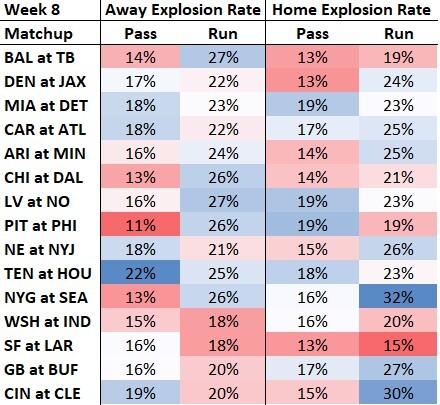 These offenses breed explosive plays: Just three offenses are averaging an explosive pass play on at least 10% of their dropbacks: Patriots, Chiefs and Lions.

The whole “spread the ball around” thing really worked for the Chiefs in Week 7: Patrick Mahomes warned fantasy managers before the season that things would be spread around on a week-to-week basis. This certainly proved to be true (aside from Travis Kelce’s typical excellence) for the first six weeks of the season, but the entire wide receiver room really got going in the team’s dominant Week 7 win over the 49ers:

Through seven weeks, Mahomes leads the NFL in passing yards (2,159) and touchdowns (20). Both league-high marks are at least somewhat due to Josh Allen already having had a bye week; either way, Mahomes’ performance has largely been nothing short of masterful especially after considering he’s dealing with life without arguably the NFL’s single-best wide receiver.

Former Giants WR Kadarius Toney has a bye week to integrate himself into the offense; he possesses legit upside WR2 potential should he earn a full-time role and the injury gods chill out for a bit (two big ifs). His presence is worse news for Mecole Hardman and Skyy Moore than JuJu Smith-Schuster and Marquez Valdes-Scantling, who are both expected to remain full-time starters in two-WR sets.

Pain: Stud Bengals WR Ja’Marr Chase is expected to miss four to six weeks with a hip injury. The potential for Joe Burrow to keep on putting up big numbers in an offense suddenly cool with throwing the ball more and pushing the pace means that all non-injured parties receive boosts. This applies to Tee Higgins, Hayden Hurst and especially Tyler Boyd, who has managed to ball out quite nicely in 13 career games with Joe Burrow, but without one of Chase and Higgins. Overall, Boyd has posted a whopping seven finishes inside the position’s top-20 PPR performers in this span, while only on three occasions did he finish lower than the PPR WR36.

Further helping matters is a solid matchup against the Browns this week; they have struggled mightily against the deep ball this season:

Believe in the Sun God: As long as the man is actually OK. The NFL’s new concussion protocol ruled Amon-Ra St. Brown out in the Lions’ Week 7 loss to the Cowboys. Good news: The Lions clarified that St. Brown actually didn’t suffer a concussion. Side note: Amon-Ra was limited in practice on Wednesday and Thursday due to concussion protocol. Does anyone else feel like we’re taking crazy pills?

If active, St. Brown needs to continue to be jammed into fantasy lineups of all shapes and sizes. And why wouldn’t he? Reminder: St. Brown has barely missed in his last nine games not impacted by injury:

I’m less keen on trusting this offense’s ancillary weapons at the moment; this group has scored a whopping 6 points in their last eight quarters of football. Still, St. Brown should avoid the Lions’ toughest matchup from the friendly confines of the slot if healthy enough to suit up: No. 1 Dolphins CB Xavien Howard has spent 88% of his snaps at outside cornerback this season.