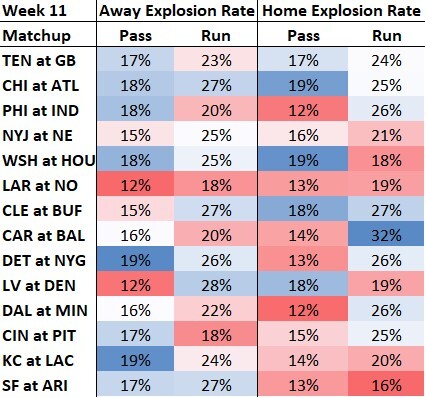 Never fear the Sun God is here: It’s tough to overly blame Jared Goff for throwing just five touchdowns over the past five weeks after starting the season with 11 in his first four games due to the myriad of injuries that have impacted his pass-catchers. The T.J. Hockenson trade also didn’t help matters.

And yet, there is one constant in Detroit: Amon-Ra St. Brown puts up big numbers pretty much anytime he’s healthy enough to suit up. Overall, the Sun God has finished with fewer than six receptions in just one of his last 12 non-injured games:

The ceiling of this passing game simply isn’t all that high with each of D.J. Chark (ankle, IR), Jameson Williams (knee, PUP) and Josh Reynolds (back) all sorts of banged up; just realize kings stay kings, and St. Brown’s production has been awfully royal for the better part of the last 12 months.

Time to unleash Kadarius Toney on your fantasy enemies?: If JuJu Smith-Schuster (concussion) joins Mecole Hardman (abdomen, IR) on the sideline: Yes. All the second-year talent has done in his first two games with the Chiefs is turn his first eight touches into 102 yards and a touchdown. Sure, the score was the result of a busted coverage, but the 2021 first-round pick has also already flashed some tantalizing YAC and contested-catch skills.

Toney truly seems to move at a different frequency than other players on the field.

The Chiefs have eased Toney into the offense, but Patrick Mahomes himself has indicated that Toney will continue to get more and more run. They might not have a choice if JuJu and Hardman are ruled out; I’ll be bumping Toney up to low-end WR2 territory should this occur, while he’ll be more of an upside WR3 if still at risk of consistently working outside of primary three-WR sets.

The sad, sad Kyle Pitts experience: Overall, only Chris Olave (475) and Diontae Johnson (445) have more unrealized air yards than Pitts (422) this season, meaning they have missed out on more downfield opportunities than any other pass-catchers in the NFL.

That’s the most frustrating part here: Pitts’ usage has actually been fine enough despite operating in the NFL’s most run-heavy offense. The TE7 in expected PPR points per game this season, Pitts stands out more for leading the position with 34.2 fantasy points below expectation on the season.

Obviously, fantasy managers didn’t draft Pitts in the third round to get the TE7 in expected PPR points; just realize that would standing would be amazing compared to his real status as the TE21 in PPR points per game. As sad as it is, Pitts continues to boast the talent profile and just enough of a workload to warrant top-eight treatment, especially with bye weeks and so many top options at the position dealing with injuries.