Welcome to the Week 8 edition of the 2019 fantasy football trade value chart. We’re officially past the halfway point in most fantasy football regular seasons and now at the beginning of the final push toward the playoffs. Week 7 was a doozy, with several notable players exiting games due to injuries and crushing fantasy football owners’ hopes and dreams. Kerryon Johnson, Adam Thielen, Will Fuller V, and David Johnson were among some of the active players that left early, with Kerryon Johnson out until at least week 16. However, there were some great performances. Altogether, it was a very up-and-down week for fantasy football.

As alluded to previously, Week 7 did see its share of star production (and massive letdowns). Latavius Murray and Chase Edmonds (if you started him) came up big for their owners, rewarding those who stashed and started them for Alvin Kamara and David Johnson, respectively. Darren Waller finally scored a touchdown … and then added another. DeAndre Hopkins rebounded for his first big game since Week 1, moderately calming owners’ fears. And Kirk Cousins continued his MVP-like streak with another four-touchdown performance. But who were the top producers this week? 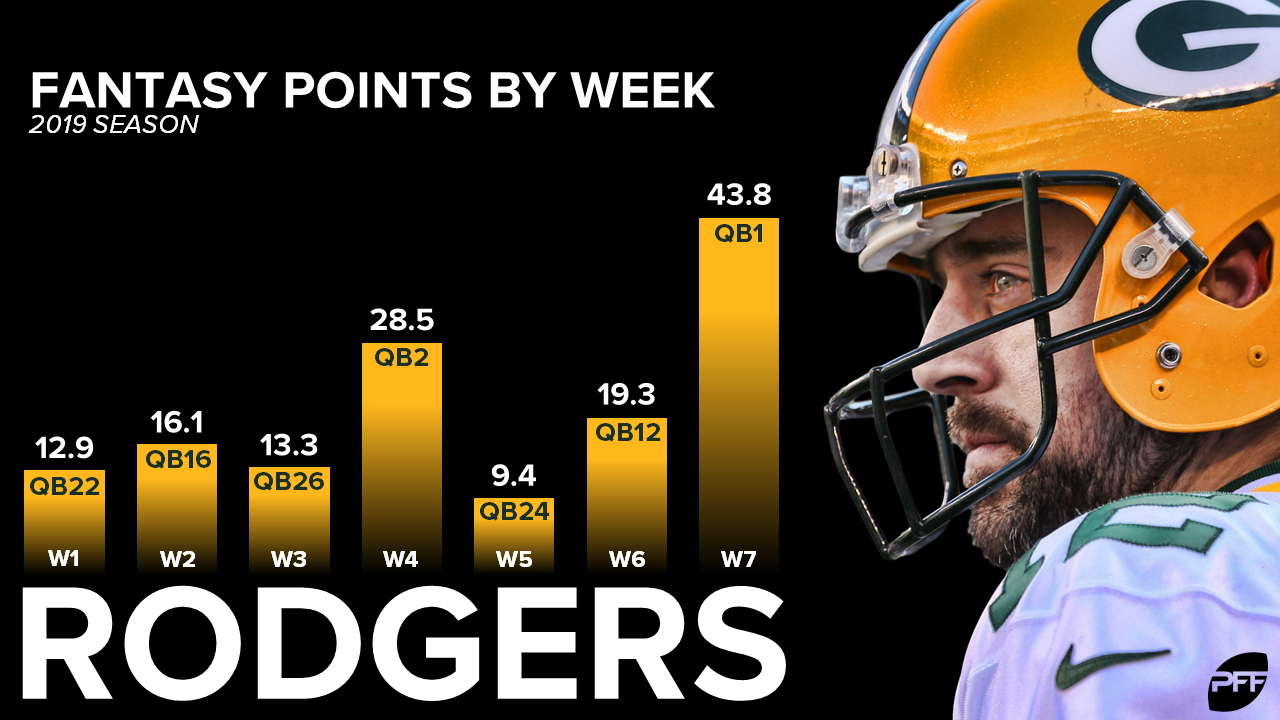 Aaron Rodgers turned in a 43.8-point day, with 435 total yards to go along with six combined touchdowns (five passing and one rushing). Many owners were worried that considering the Packers’ somewhat decimated receiving corps and caution with which Rodgers plays that his top fantasy football-producing days were over. Not only is he now ranked among the top fantasy QBs, but he’s also PFF’s top-graded QB.

Marvin Jones Jr. went bananas this week, catching 10 balls on 13 targets for 93 yards and four touchdowns, producing 43.3 PPR points. Jones had just one touchdown coming into Sunday’s game, without catching more than six balls in any single contest. As many other WRs in today’s era, Jones presents a massive booming ceiling with a potentially week-losing floor. However, as a WR3 on my team, I’d happily take him.

Check out the full chart below. Remember, these values simply provide you with a foundation for prospective trades as of Week 7 and looking forward throughout the rest of the season. Tailoring these values to your league’s distinct settings or your opponents’ tendencies can drastically impact your transactions.