The candidates to be 2018's No. 1 fantasy wide receiver

As you look through the early 2018 PFF rankings you’ll find only a few differences at which player each of our analysts have atop the various spots.

There are a handful of favorites to be the top producer at their respective position, but there are some longshots too. We have already covered some candidates at quarterback and running back. Up next let’s examine the fantasy wideouts that should be in the conversation.

Here’s a list of some potential WR1 candidates in PPR leagues for 2018 along with my opening odds.

Even though he was sidelined the final two weeks of 2017 due to an injured calf, Brown managed to reach 300 PPR fantasy points for a sixth consecutive season. During that span that feat has only been accomplished 21 times total, and the Steeler has accounted for 28.57 percent of those.

Consistency and durability work in his favor. He’s only missed six games since 2011. Over the past three years Brown has had 100 yards or a touchdown in 33 of 50 contests (counting playoff games). When you add his blowup games to the mix he easily rises to the top.

Hopkins finished as last year’s top-scoring wide receiver and as WR3 in 2015. That track record works in his favor. His dip in 2016 can be blamed on Brock Osweiler and the disaster that situation was. He led the league last year with 164 targets, which was the lowest mark for league-leader since 2009.

With Deshaun Watson trending towards being healthy to start the season, the sky could be the limit for Hopkins. Watson’s strong arm and mobility to move around in the pocket allows Hopkins to get open down the field (14.3-yard average depth of target, 8.1 yards per target), resulting in some monster plays and great fantasy production.

A broken ankle derailed Beckham’s season just five weeks into 2017, but he’s expected to be 100 percent for the start of 2018. There’s no questioning his talent and now the team has some other young weapons throughout its offense.

There’s been some offseason chatter about the Giants and Beckham parting ways, but he remains very much in the team’s plan. The addition of Saquon Barkley should force defenses to lighten their coverage on Beckham a bit, especially inside the 10-yard line, where he has only pulled in 11 of his 20 targets over the last three years.

It was a disappointing 2017 season for Jones, but he still managed to finish seventh in fantasy points. Nearly 20 percent of his production came in his Week 15 blowup versus Tampa Bay — outside of that game he only broke 100 yards in three other contests.

He failed to score in 14 games last year despite finishing third in the NFL with 19 red-zone targets, only turning two of them into scores. Jones also led the league with 3.08 yards per route run; outside of Antonio Brown (2.87) no other wide receiver surpassed 2.55. 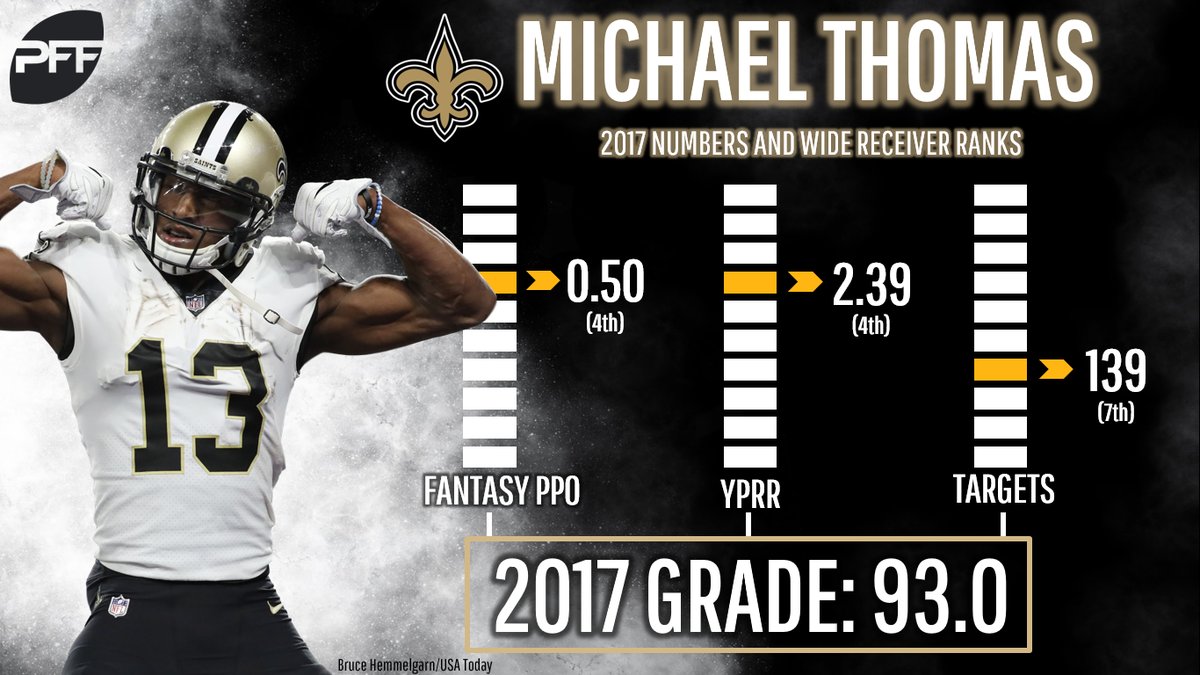 Thomas was a force during his second season as a pro as he finished seventh in targets (139), third in receptions (104 – Saints’ team record) and sixth in receiving yards (1,245). He was particularly effective in the slot where his 3.63 yards per route run was unmatched.

Amazingly, Thomas has only posted five 100-yard games in 31 pro outings. After scoring nine touchdowns as a rookie, the Saints wideout only made it into the end zone five times. It is easy seeing him to take a step forward in both areas in the season ahead.

Only 7.5 percent of his targets went over 20 yards, which is league-low of players to see at least 60 percent of their team’s snaps. His 0.32 points per snap and 0.5 points per opportunity in PPR leagues had him ranked in the top five for both categories.

The Bengals’ offense was a mess last season, including boasting one of the league’s worst offensive lines. The unit never got into sync and Green’s numbers reflected that, as he posted career lows in yards per route run (2.1), catch rate (56.0), and yards per game (67.4).

Offensive coordinator Bill Lazor, who took over a few weeks into last season, plans to put more of his own stamp on the playbook in 2018 and the team made big improvements this offseason to the offensive line. Both of those things should both help lead Green to a big bounceback.

Of these wideouts currently not ranked inside the consensus top 5 at @PFF_Fantasy which player has the best chance to surprise and finish No. 1?

Adams finished 2017 with 10 touchdowns despite playing half the season with a fill-in quarterback and missing the last two games with a concussion. It marked the second straight year he had double-digit scores.

Adams pulled in 74 of his 108 targets for 885 yards. The Packers already signed him to a four-year, $58.75 million extension this offseason and the 25-year-old has clearly emerged as the team’s No. 1 wide receiver. If both he and Aaron Rodgers stay healthy in 2018, the sky is the limit.

Evans was held to five touchdowns in 2018 and only eclipsed that mark once in the past three seasons. That is particularly alarming when you consider that he was second in the league with 20 red-zone targets.

He had as many games in standard formats where he failed to reach seven points as he did contests where scored double-digits in 2017. Evans has scored 12 times twice in four pro seasons, though, and reached the 1,000-yard mark every year. He doesn’t turn 25 until August, which suggests there is still room for improvement.

Over the past three years, Baldwin has been as steady a producer at wide receiver as you can ask for. He places inside the top 10 in receiving yards (3,188), receptions (247) and receiving touchdowns (29) during that span and clearly is Russell Wilson’s go-to-guy.

Seattle had makeovers on both sides of the ball during the offseason and seemingly has taken a step backward defensively, which could lead to them playing from behind more frequently. Add in that both Jimmy Graham and Paul Richardson departed in free agency and Baldwin appears poised to see the most targets in his career.