The best fantasy QB options to stream for Week 7

Each week in this space, we’ll highlight the best quarterbacks to pick up and stream in fantasy football. Today, we’re looking ahead at Week 7.

Before we get there, though, let’s take a look back and see how our Week 5 recommendations fared. Kirk Cousins absolutely decimated the Philadelphia secondary and scored a solid 28.3 points, which was good for sixth among QBs in Week 6. … Jimmy Garoppolo, who didn’t find the end zone, had a much less spectacular fantasy outing. … Both Gardner Minshew and Andy Dalton, who looked like good streaming options in standard leagues, failed to capitalize on positive gamescripts, finishing just 24th and 18th, respectively. … In deeper leagues, Devlin Hodges had a quiet debut, scoring just 9.1 pts on 20 passing attempts. … Teddy Bridgewater finished the week as the 19th-highest-scoring quarterback.

In Week 7, Jameis Winston and the Buccaneers will get a bye week, as will the Browns, the Steelers, and the Panthers. Let’s look at the Week 7 streaming options. 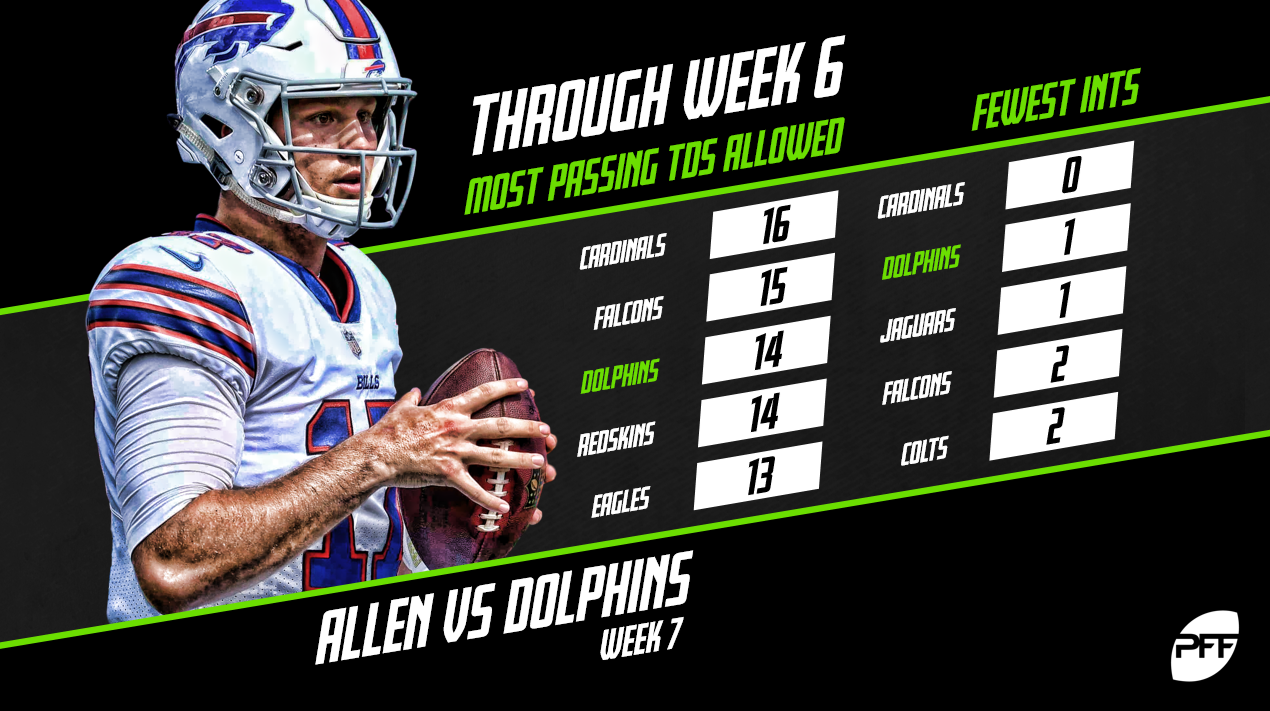 In four of his five starts this year, Allen has eclipsed the 15-point threshold, but he has yet to break 25 points, which is likely the reason he’s not owned in more leagues. As the prototypical (so far at least) high-floor, low-upside quarterback, Allen makes for the safest streaming option in just about any league, as the Bills host a Dolphins defense that has allowed 14 passing touchdowns and secured just 1 interception. For what it’s worth, Miami has allowed the fourth-most rushing yards so far this season and Allen is the kind of quarterback who does not hesitate to take off and run the ball when he doesn’t have a good look.

After torching the Eagles last week, Cousins should be a popular name on the waiver wire this week. With what should be a close divisional matchup in tow, Cousins makes for a great streaming quarterback option in Week 7. Our projections currently have Cousins finishing the week as the 10th-highest-scoring quarterback with 18.9 points, but the sky's the limit as long as Stefon Diggs and Adam Thielen are catching his passes.

Despite being owned in less than half of redraft leagues, Brisset has been surprisingly efficient, posting the 12th-most points per dropback so far in 2019. Against a pass-friendly Texans defense, Brissett should surpass the 20-point mark with relative ease. Houston has allowed over 250 passing yards and 3 touchdowns two weeks in a row, which bodes well for Brissett and the Colts offense.

After getting tested against the league’s highest-graded defense last Thursday, Jones will face the Cardinals, who have been less than stellar. The Cardinals have allowed every quarterback against them to top 20 fantasy points so far except Russell Wilson, and the Seahawks jumped out to such a big lead so early that that was a function of gamescript and not any actual defensive performance. Three quarterbacks — Matthew Stafford in Week 1, Lamar Jackson in Week 2, and Matt Ryan in Week 6 — have even topped 27 against Arizona.

I should add a disclaimer that while Trubisky expects to play, he is currently listed as questionable. Make sure to check our fantasy rankings closer to game time to make sure he is playing. But the Bears’ Week 7 opponent, the Saints, have been a big-time boom-or-bust proposition for opposing quarterbacks this season. Deshaun Watson (31.7) and Russell Wilson (41.3) had monster games against the Saints, while Dak Prescott (8.6) and Gardner Minshew (5.6) saw their fortunes go the other way. So Trubisky is a wild card, but with extreme upside.

Like the Saints, the Packers have been a boom/bust defense for opposing quarterbacks this year, albeit with more bust than boom. Opposing quarterbacks averaged only 8.7 fantasy points against the Packers in Weeks 1-3, but that number jumped to 19.3 in Weeks 4-6. Part of that is a function of the Packers’ offense improving as well — the Packers scored 19.3 points in Weeks 1-3, then 28.0 in Weeks 4-6. Meanwhile, Carr has been surprisingly good this year, coming into Week 7 as PFF’s sixth-highest-graded passer at 79.4 and setting a career-high completion percentage at 73.3%.