Week 6 fantasy football predictions: Jameis Winston one of the top QB streamers in his first start

Heading into Week 6, it’s time again to look at streaming candidates at the quarterback position for fantasy football. With five weeks now in the books, we are better equipped to separate trends from anomalies. Save for C.J. Beathard, there weren’t all that many surprises atop the fantasy leaderboard for Week 5. Then again, that depends on what one deems surprising.

For example, prior to his shoulder injury, Andrew Luck was a perennial fantasy QB1 and our consensus top dynasty quarterback entering last season. All things considered, is it really all that surprising that he once again ranks among the top-12 fantasy QBs on the season? Perhaps. Although too obvious a name to endorse here as a streaming option, Luck was still benched in more leagues than he was active last week.

Point being, if one looks hard enough, we can find reasons to bench just about any QB (see Tom Brady, Cam Newton, Matthew Stafford, Russell Wilson). Of course, such a decision always comes down to what other options are available.

The Lions and Saints are idle this week, taking Stafford and Drew Brees out of the equation.

Notes: Rosen’s first pass in his first career road start went for a 75-yard touchdown, but the fun pretty much ended there. Still, dynasty investors can be encouraged that a league-high 20 percent of his attempts were targeted 20-plus yards downfield. … As we’ve seen time and again, “Bad” Bortles in real life doesn’t always translate to Bad Blake in fantasy. Note the disparity in the chart above between Bortles’ grade and fantasy finish, as he threw for a career-high 430 yards to strike fantasy gold in another Leonard Fournette-less gamescript. … Prescott was the polar opposite of Bortles in terms of graded effort vs. end fantasy result.

Below are the most attractive options for QB streaming for Week 6 who are either widely available (below 50-percent ownership in ESPN), on your bench (started in less than 25 percent), or priced cheap in daily formats (outside the top-12 QB salaries on FanDuel’s Sunday slate).

With ownership having settled out as 17 QBs are currently rostered in more than half of ESPN leagues, we’ll expand our range a bit this week to include shallow and deeper leagues.

Despite a rocky performance against Miami on Sunday, we’re going right back to the well with Dalton hosting division-rival Pittsburgh. Historically a tough matchup, this one opened the week with Las Vegas’ third-highest over/under. The Bengals have a healthy implied total of 26 points against a Steelers defense that currently owns a bottom-10 PFF grade in both pass rush and coverage, as they are giving up the third-most fantasy points per game to opposing QBs. Dalton had averaged 284 yards and three touchdowns through the air over his previous five games, and he’s still averaging 0.5 fantasy points per dropback on the season, which is on par with last year’s QB8 (Kirk Cousins).

Against Miami last week, Dalton was accurate on 85.7 percent of his throws under pressure, and he was pressured on 41.2 percent of his dropbacks. The Bengals coaching staff schemed up easy hot reads with A.J. Green lined up in the slot against man coverage, which allowed him to get separation with crossing routes over the middle. In fact, all six of Green’s catches went for first downs.

As I noted last week, the fantasy community has been slow to come around on Bortles, so we’ll keep riding the wave until he lands on the whammy. Only “Bad” Blake can reward owners with five turnovers and 27 fantasy points. In his defense, Bortles was pressured on a week-high 26 dropbacks, and his receivers dropped a week-high five passes. Such is life on the wild ride that is the Jaguars offense when Leonard Fournette is inactive.

Bortles stayed aggressive, as he also chucked it deep a week-high 10 times in Week 5, completing six of those throws for 171 yards and a 104.2 passer rating. On the season, Bortles has been accurate on 55 percent of his deep targets (seventh-best). Up next is a Kansas City defense that owns our seventh-worst coverage grade and has yielded the fifth-most fantasy points per game to opposing QBs.

Other than an early miscommunication with Rashard Higgins that resulted in an interception, Mayfield took care of the ball and kept the chains moving against Baltimore. Better yet, the rookie has increased his production each week to date. But there are quite a few other promising factors that don’t show up on the standard box score. For example, did you know that Mayfield has the highest drop rate of any QB this season?

And yet, Mayfield stayed aggressive against the Ravens, completing 4-of-7 deep attempts for 90 yards and a score. Three games into his career, Mayfield boasts the third-best adjusted completion rate (60.0) on deep throws, and he’s slinging it downfield 14.0 percent of the time, the eighth-highest rate in the league. If only the Browns hadn’t given up on a certain wideout whose specialty is making big plays downfield…

Still available in three out of four leagues coming off a six-touchdown performance, Trubisky enters Week 6 with two full weeks to prepare for the Dolphins. Miami has been the third-stingiest unit against fantasy QBs but ranks in the bottom half of our defensive grades. In case you forgot, Trubisky was downright deadly with the deep ball his last time out, completing 7-of-8 attempts for 218 yards, three TDs, and a perfect 158.3 passer rating. At the time, only 11 QBs had completed more deep passes on the season.

Downfield throws (20-plus yards) account for 17.7 percent of Trubisky’s targets this year, the second-highest rate in the league. Granted, one big game is skewing the numbers, but Trubisky entered Monday tied with Drew Brees for seventh in fantasy points per dropback (0.57). He’s even found another weapon in Tarik Cohen, who produced a career-high 174 yards on 20 touches. Coach Matt Nagy seems to have dialed up the right mix, letting Trubisky take his shots while also giving him a safety outlet out of the backfield.

Left for dead by the fantasy community, “Famous Jameis” is set to make his first start of 2018, and it could hardly come in a better spot. The Bucs-Falcons matchup opened with a game total of 58 points, with an implied total of nearly four touchdowns (27 points) for Tampa Bay. The Bucs dialed up pass plays on 24 of Winston’s 35 snaps upon replacing Ryan Fitzpatrick in Week 4. They figure to air it out plenty more against Atlanta. 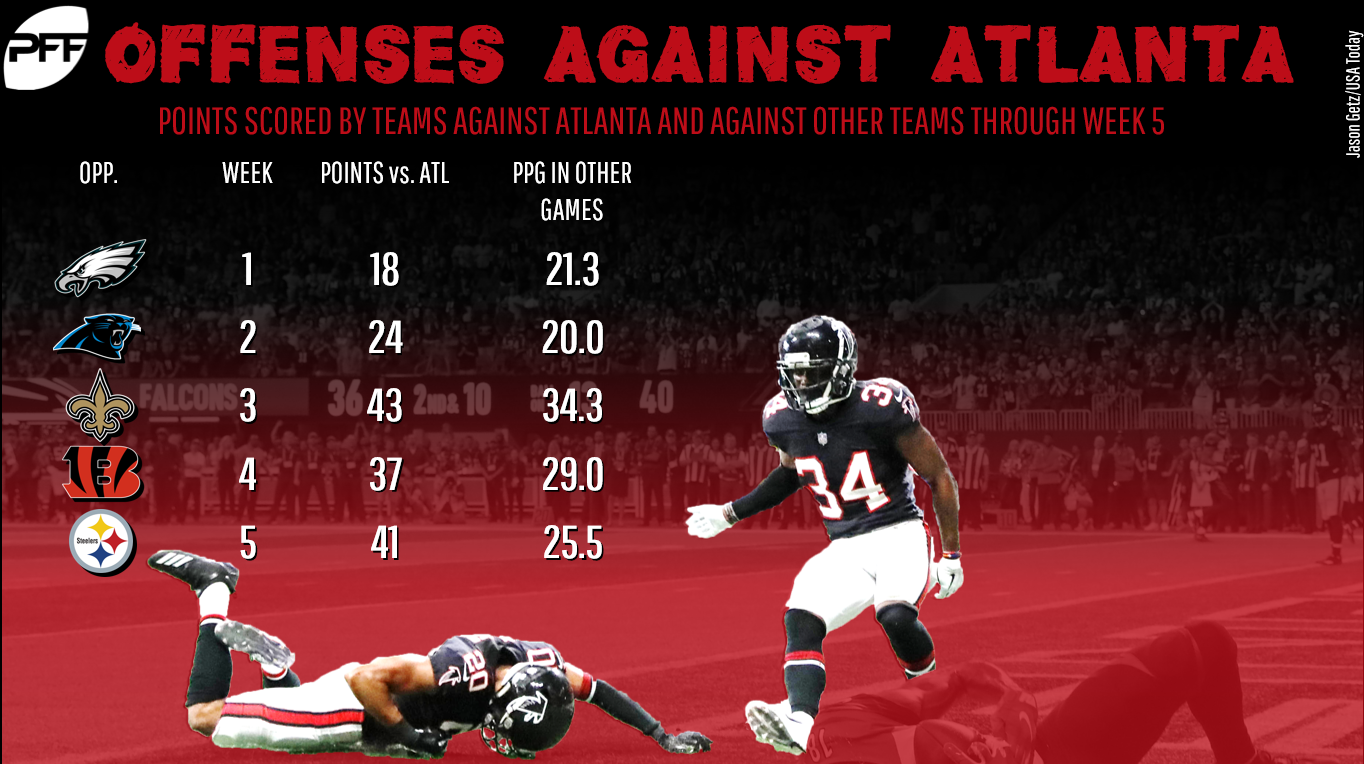 Only three defenses have been more generous to opposing QBs than the Falcons, who own PFF’s second-worst pass rush grade. The banged-up Atlanta defense has surrendered three passing scores in each of its last four games, allowing an average of 330 YPG through the air in that span.

Apparently, I was a week too early when I last endorsed Keenum as a streaming option back in Week 4. It wasn’t pretty for Denver’s offense against the Jets’ relentless pass rush on Sunday, but Keenum delivered his best fantasy performance since the opener. Better yet, all of Demaryius Thomas, Emmanuel Sanders, and Courtland Sutton enjoyed fruitful days for fantasy owners.

Up next are the Rams, who own PFF’s top pass-rush grade. But if we dig a bit deeper, Keenum did post a 117.2 passer rating when pressured in Week 5, as two of his TDs came under duress. The books opened this week’s matchup opened with a 53-point total and the Broncos as seven-point home underdogs. Mind you, Keenum is throwing it downfield at the fifth-most frequent rate this season (16.1 percent of total targets), and his 12 deep completions trails only Patrick Mahomes.