The 7 things we learned about fantasy football in Week 5

What are some of the top lessons for fantasy football in Week 5 of the 2018 NFL season? There are some things we had theories about leading into the week, and the Week 5 games put many of those theories to the test.

Here are seven things we learned in Week 5.

Mahomes hosted the Jaguars, who had given up the fewest fantasy points to opposing quarterbacks through four weeks. He proceeded to drop 313 yards on them while playing with the lead the entire game. Mahomes added another 13 rushing yards and a score on the ground.

He didn’t pass for a score, and he threw his first two interceptions — a credit to Jacksonville’s D — but the fact that Mahomes remained fantasy-startable in this matchup means he’s a must-start every week. Mahomes is officially matchup-proof.

Aaron Rodgers is back … and just wait until his weapons are, too

Rodgers hung 442 yards with three touchdowns and no interceptions on the Detroit Lions in Week 5 — his first week not on the injury report. And he did it without Randall Cobb or Geronimo Allison, who had accounted for 36% of Rodgers’ targets Weeks 1-4. Rodgers massive yardage line was aided because the Packers were playing from behind the whole time, but a finally-healthy Rodgers dropped his first top-two finish of the season (pending Monday night).

Adam Thielen is really, truly, an elite WR1 (no, really, he is)

It’s time to stop doubting him. Thielen now has five straight 100-yard games to begin the season, which no player in the Super Bowl era has ever accomplished. He has a massive 31% team target market share, and his 65 targets rank tied for first (with Antonio Brown) in the NFL. Thielen is the No. 1 fantasy receiver so far this year, and it’s not even close. (With the admission that Michael Thomas is 21 points behind him but hasn’t played his Week 5 game yet.)

His overall fantasy finishes by game this year: WR24, WR3, WR6, WR6, WR5. Thielen is a no-brainer top-10 fantasy wide receiver this year, and, at least in PPR leagues, you can safely call him a top-five fantasy wideout.

Keke Coutee is a name you need to know

Over the last two weeks, Coutee ranks second in Houston with a massive 25.3% team target marketshare, albeit with a banged-up Will Fuller. Even once Fuller returns to full health, it’s apparent Coutee will still have a role.

Coutee was the WR13 in Week 4 and the WR18 in Week 5 (pending MNF). He’s a flex option when the team is fully healthy, and he has legitimate WR2 upside if Fuller or DeAndre Hopkins are ever injured.

Detroit has a loaded receiving corps, but it was abundantly clear in Week 5: Golladay is their best. Aside from him filthy 60-yard catch and run with a stiff arm to rival Vance McDonald, Golladay paced the team in targets (9) and scored (again). 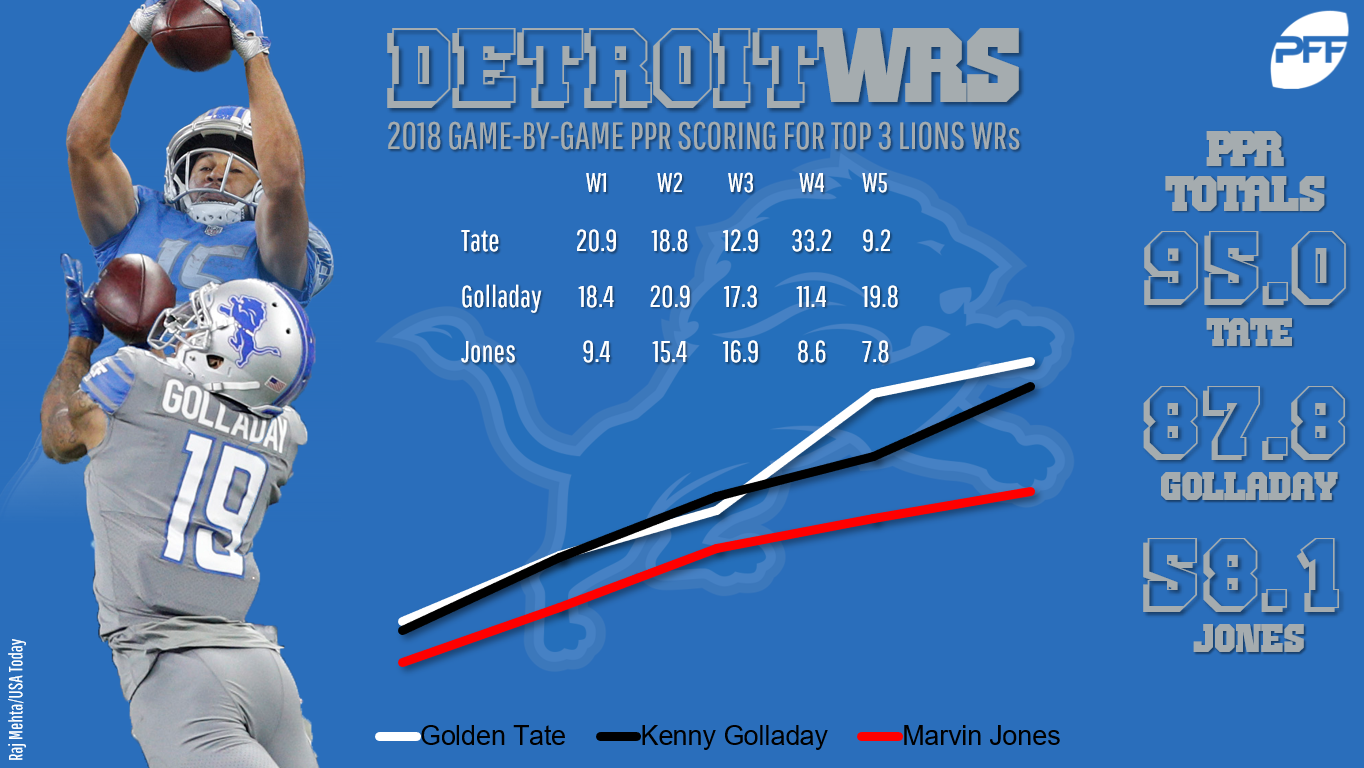 Tate (7.1), Golladay (10.9), and Marvin Jones (17) all have distinct roles on the team, evidenced by their respective average depths of target. Tate may be the slightly better PPR option given his lower aDOT, but Golladay has only five fewer targets than Tate and only three fewer yards. At a minimum, Golladay is clearly ahead of Jones on the “Detroit receivers I’d like to have in fantasy” race — which isn’t a race I was expecting him to be leading by Week 5.

Don’t look now, but Lockett is WR16 in standard leagues and WR20 in PPR leagues, with four touchdowns through five games. Lockett leads the Seahawks in target market share (19%) and air yards (352) — over 100 air yards from any other Seahawks pass-catcher.

Seattle is not a high-volume passing offense, so Lockett isn’t primed to make another leap, but at the very least, we have to consider him a weekly flex option. He has at least 50 receiving yards in all five games and at least one touchdown in four games.