It’s on to Week 5 of the fantasy football season, and the quarterback streaming options continue to be plentiful.

Just how plentiful? This is mind-blowing: the top 15 fantasy QBs on Sunday averaged 370 yards, three touchdowns, and 29 fantasy points.

Let that sink in for a moment.

Better yet, only three of those 15 QBs were started in more than half of ESPN leagues, and seven are still available in at least 30 percent of leagues. These days, if your fantasy quarterback throws for 200-some yards and a couple of scores, you’re likely facing long odds to win that week’s matchup. Across the board, we are off to a historic start to this season in terms of passing numbers.

In a performance no one saw coming, Mitchell Trubisky entered Week 4 with our second-worst quarterback grade, then proceeded to complete more deep passes (seven) than all but 11 QBs have completed all season. Of course, we’ll have to make do without this newfound toy as the Bears have a bye this week, along with the Buccaneers, who have already moved on from the FitzMagic era.

Notes: Believe it or not, this time last week Goff’s name was in only 16 percent of ESPN starting lineups, and he was still available in nearly 40 percent of leagues. He’s now a top-five fantasy QB a quarter of the way into the season and no longer an eligible streaming option. … Dalton is bordering on must-start territory (more on him below). …On the other hand, Tannehill was a top-10 fantasy QB entering last week, which will also be the last week I endorse him as a viable streaming option for a long time.

Below are the most attractive options for QB streaming for Week 5 who are either widely available (below 50 percent ownership in ESPN), on your bench (started in less than 25 percent), or priced cheaply in daily formats (outside the top-12 QB salaries on FanDuel’s Sunday slate).

Smith will have had two full weeks to prepare for Monday night’s tilt with a Saints defense that has allowed the second-most fantasy points to opposing QBs and owns PFF’s fourth-worst coverage grade. The Redskins began the week as seven-point underdogs with a game total set at 52.5 points, giving Washington a healthy implied total of 23 points. A big key for Smith is making quick, decisive reads and staying aggressive. That was the case in Week 3 against Green Bay as he looked early and often to the tight end duo of Jordan Reed and Vernon Davis.

Smith owns a 116.3 passer rating when getting the ball out in less than 2.5 seconds this season, compared to an 89.4 rating when taking longer to throw. At least in the early going, the extra prep time should be an advantage in that area. What’s more, Smith has been accurate on 57.1 percent of his deep throws, which marks the fifth-best rate in the league and a continuation of what we saw from him in Kansas City last year when he was the third-most-accurate deep passer (54.8 percent).

Over his last five games, Dalton has averaged 284 yards and three TDs through the air. He’s finished inside the top-15 fantasy QBs each of those five games, including three in the top-10. Up next are the Dolphins, who have been fairly stout in coverage, although they opened against the Titans, Jets, and Raiders before yielding a trio of passing TDs to Tom Brady this past weekend. Still, Cincinnati has a Las Vegas implied total of 22 points as a six-point home underdog.

As for Dalton, he completed 3-of-5 deep attempts against the porous Falcons, two resulting in touchdowns. Dalton was also accurate on 25-of-28 aimed throws, as he got the ball out third-quickest of all QBs on Sunday (2.24 seconds). Tyler Eifert’s injury no doubt stings, although Dalton has only unearthed another clutch weapon in Tyler Boyd. 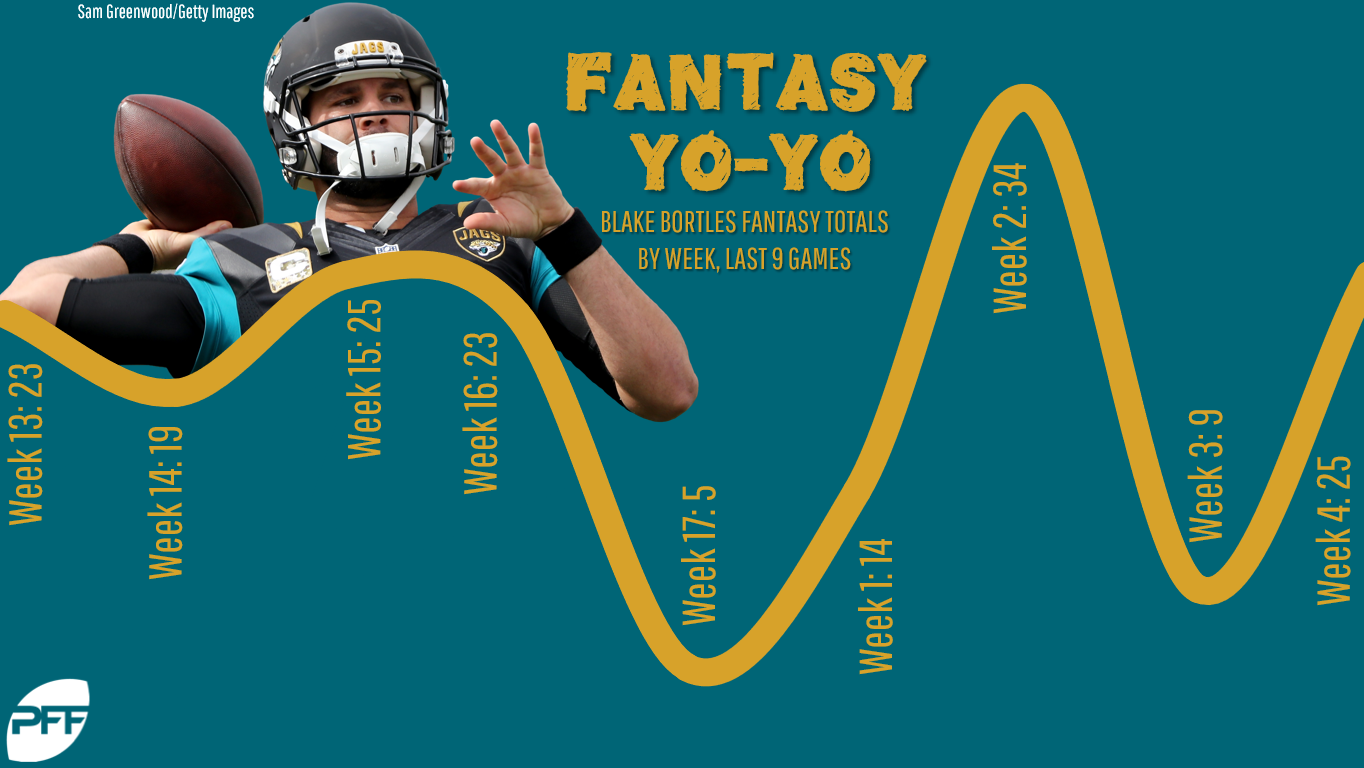 There is always the risk that Bortles is going to land on a whammy just when you can least afford it. But given his ownership, the fantasy community has not caught up to just how dominant a force he has become. Case in point: over his last nine regular-season games, Bortles has hit that whammy three times and finished outside the top-20 fantasy QBs for that week. However, in the other six of those nine games, he’s finished inside the top-10. You don’t need a thesis on the merits of late-round QB draft strategy when there’s a guy like that who is currently available in four out of five leagues.

It only gets better in Week 5 when the Jaguars face a Kansas City defense that owns our very worst coverage grade. Against the Jets this past week, Bortles made a point to hit his receivers in stride with an opportunity to run after the catch. He was also pressured on 36 percent of his dropbacks, yet he stayed remarkably cool with a 75.0 adjusted completion rate and a 136.8 QB rating when under duress. With no Leonard Fournette for the next few weeks, Bortles will have plenty of chances to keep airing it out.

The Cowboys, aka the Rams of the South, will take on a Houston defense that owns our second-worst coverage grade and No. 21 pass-rush grade through four games. And while Prescott didn’t exactly morph into Uncle Rico last week, he did complete 3-of-4 intermediate attempts (10-20 yards) along with 2-of-4 deep throws. Entering Week 4, Prescott was averaging only 5.7 yards per attempt with an average depth of 7.3 yards downfield. Against Detroit on Sunday, his YPA (9.4) and aDOT (9.9) both jumped considerably as he was able to connect with Michael Gallup and Ezekiel Elliott for big gainers.

Of course, Prescott wasn’t asked to do all that much as Elliott carried the offense with a season-high 25 carries. Then again, with the ground game picking up steam behind Elliott’s 279 rushing yards over the last two weeks, opportunities will come as defenses stack the box. Prescott had a 146.8 passer rating on play-action throws against Detroit, completing 6-of-9 attempts for 113 yards and a score. Through four games, Prescott has seen his passer rating jump 42 points with play-action compared to all other throws.

Sure, I could list Rosen here for the sole reason that he’s going up against a 49ers defense that owns PFF’s third-worst coverage grade. But while we’re talking about PFF grades, Rosen’s starting debut graded out behind only Jared Goff and Mitchell Trubisky on Sunday. The box score doesn’t tell the whole story, considering Rosen was victimized by three costly drops in the first half and got little out of Larry Fitzgerald due to a nagging hamstring injury.

But upon closer look, Rosen has been accurate on 3-of-4 deep attempts so far, which is in stark contrast from the conservative approach behind Sam Bradford. In fact, Rosen’s aDOT is nearly three full yards better than Bradford’s. Willingness to take shots downfield is only part of Rosen’s fantasy appeal. He also executed well on play fakes, completing 4-of-7 attempts for 68 yards and a TD, good for a 129.8 passer rating. It just goes to show what can happen when David Johnson gets his prescribed dose of the game plan.