The best fantasy QB options to stream for Week 3

Some things are easier explained than others. Ryan Fitzpatrick standing as the league’s top fantasy football quarterback right now is not so easy to explain – otherwise he would have been in more than 11 percent of ESPN lineups this past week.

Think about it, though. This time last week, it was looking like the Buccaneers were going to be without DeSean Jackson in a matchup with the defending Super Bowl champs. The Eagles emerged from Week 1 boasting PFF’s top pass-rush grade and No. 9 coverage grade. They also graded top-three in both categories last season, so it’s not like there was much precedent for a backup QB making it rain for 400-plus yards and four scores through the air. Then again, this is exactly the sort of thing that gives fantasy football its mass appeal.

Besides Fitzpatrick… Andy Dalton, Blake Bortles, and Joe Flacco also posted QB1 fantasy numbers in Week 2 despite light usage in season-long leagues. Of course, without any bye weeks or major injuries to deal with, you very likely have better options outside of 2QB formats. But for those having second thoughts about their starter (hi there, Russell Wilson owner!), there are always other options out there.

Below are the most attractive options for QB streaming for Week 3 who are either widely available (below 50-percent ownership in ESPN), on your bench (started in less than 25 percent), or priced cheap in daily formats (outside the top-12 QB salaries on FanDuel’s Sunday slate). 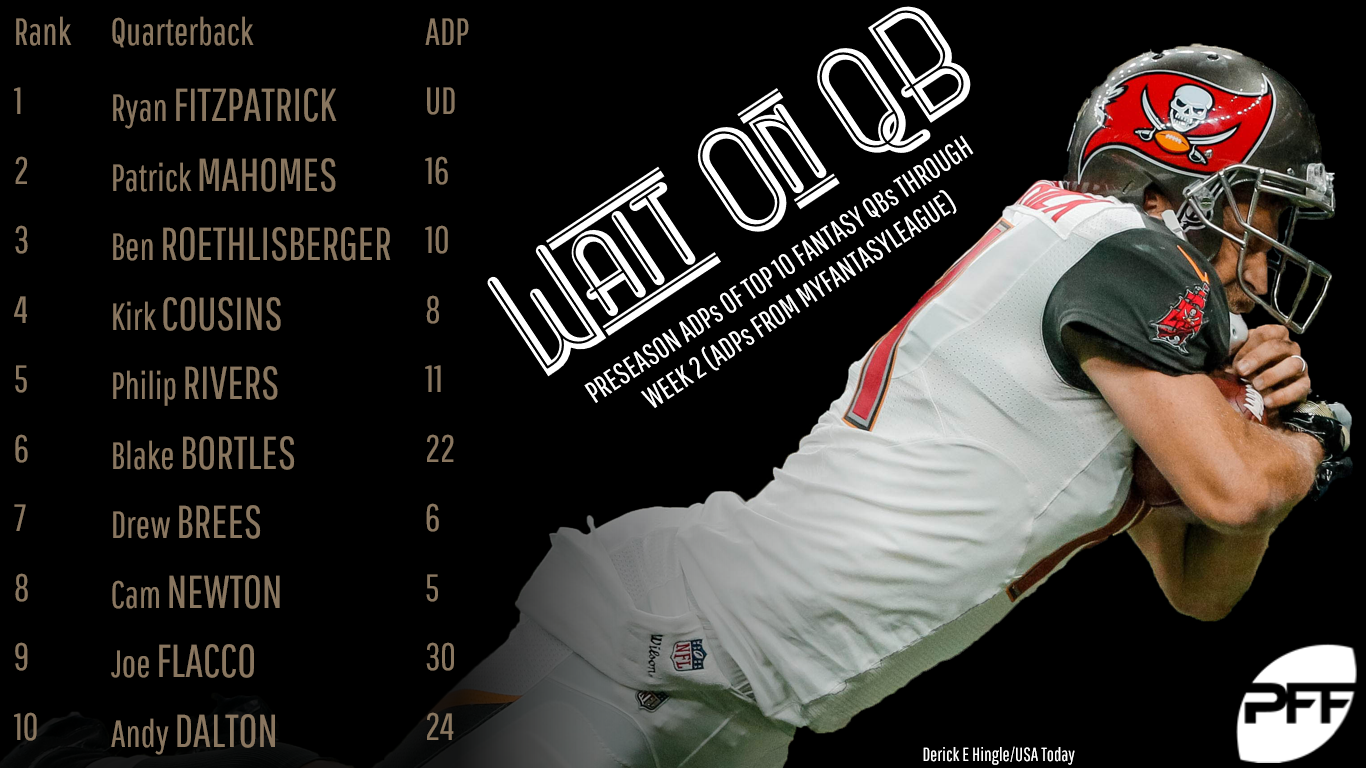 Smith has been accurate on 83.3 percent of his aimed throws, which ranks fifth-best in the league. He also owns one of the top-eight PFF passing grades through two weeks. While any coach welcomes accuracy and execution, us fantasy owners need to see those passing touchdowns, and that’s where Smith has come up short so far, with only two scores through the air.

Another missing ingredient has been the deep ball after he led the league in virtually every deep passing metric in 2017. A key part of the formula for being able to sling the ball downfield is time in the pocket, and Smith could get more of that this week when the Packers bring PFF’s No. 26 pass rush grade into the nation’s capital. Smith average depth of target is only 6.0 yards downfield, down from 7.9 yards a year ago. If there’s a silver lining, all four of his deep attempts so far this season came in Week 2, and he also racked up 195 of his 292 yards after halftime.

Put simply, Taylor has not been very good in the early going, as he ranks as the No. 32 quarterback in overall grades as assigned by our analysts. But while Taylor is merely a fantasy QB2 most weeks, our fantasy projection model puts him inside the top-10 this week at home against the Jets. In six career games against the Jets, Taylor owns a 98.0 passer rating with an average of six carries.

While Taylor may never have the same ceiling as the Tom Bradys and, uh, Ryan Fitzpatricks of the league, his rushing ability is what gives him a weekly high floor. In fact, he leads all QBs with 103 yards and a TD on the ground after two weeks. The X-factor, of course, are the big plays. Last year, Taylor chucked it downfield on 13.8 percent of his targets, which marked the eighth-most-frequent rate. His only deep attempt (20-plus yards downfield) this past weekend resulted in a 47-yard TD.

Even the world’s best blackjack player eventually busts. But when it comes to Fitzpatrick right now, we’re doubling down on a soft 16. Armed with arguably the most potent receiving corps in the league, Fitzpatrick and the Bucs are carrying a Vegas implied game total of 26 points at home against Pittsburgh this week. Let’s just take a moment to marvel at the kinds of numbers “FitzMagic” is putting up.

Fitzpatrick has dropped back to pass 69 times so far, and he’s averaging a ridiculous 1.06 fantasy points per dropback. He not only leads the league with 819 passing yards to go with eight TDs and one pick, he also leads all QBs with an 88.1 adjusted completion percentage. His near-perfect 98.8 PFF QB grade is tops in the league, as is his 153.3 passer rating when pressured. Fitzpatrick has been accurate on 75.0 percent of his deep passes, with four of his eight deep attempts resulting in a touchdown.

In addition to “throw to A.J. Green,” Dalton has done some things particularly well in the early going. He boasts a 114.6 passer rating on deep throws along with a 100.1 rating when pressured. He’s been pretty good with a clean pocket, too, posting a 111.6 rating and an 83.0 adjusted completion rate.

But really, his inclusion as a potential streaming option has as much to do with his opponent as anything else. Through two weeks, the Panthers own PFF’s No. 30 pass-rush grade and No. 25 coverage grade. Dalton and company will have extra time to prepare coming off a Thursday night game in which he tossed four first-half touchdowns. In 16 games under offensive coordinator Bill Lazor, Dalton has racked up 3,434 passing yards with 31 TDs and only nine picks. He’s also done most of that without contributions from the likes of Tyler Eifert, Joe Mixon, and John Ross.

Given that Bortles has stood among the QB1s in fantasy for each of the last three years (QB13, QB9, QB4), it shouldn’t be all that surprising by now that he is capable of delivering the type of performance he turned in this past week in a win over New England. Bortles posted our fourth-best QB grade for the week, and his 84.2 PFF passing grade so far this season ranks fifth-best.

The Jaguars’ O-line was key Sunday, as Bortles was not sacked or even hit once. When there was heat, Bortles used his legs to buy time. He was also deliberate with his reads, sporting a 127.4 QB rating when getting the ball out in less than 2.5 seconds (compared to a 90.0 rating when taking longer). Of course, the game plan sans Leonard Fournette had something to do with Bortles’ performance, as he is now 4-0 in games Fournette has missed. The chief concern here for streaming purposes is possibility that Jacksonville reverts to a run-heavy approach with Fournette back healthy.