HOUSTON, TX - SEPTEMBER 10: Whitney Mercilus #59 of the Houston Texans watches the video board in the third quarter against the Jacksonville Jaguars at NRG Stadium on September 10, 2017 in Houston, Texas. (Photo by Tim Warner/Getty Images)

As we head into Week 16 of the NFL season and the fantasy finals in many leagues, it’s time again to take a look at defense/special teams units worth streaming in fantasy football.

This is it. Week 16 kicks off Saturday and many a fantasy league champion will be crowned. Week 15 was another mixed bag regarding DST units, but we did have a pair of special team scores on Sunday, with both a punt and a kickoff returned for a touchdown. On the flip side we only had two defensive touchdowns to go with those kick returns.

We will be back in Week 17 with streaming DST units for leagues that finish up in Week 17, but for now, let’s take a look at the Week 16 DST streaming options. 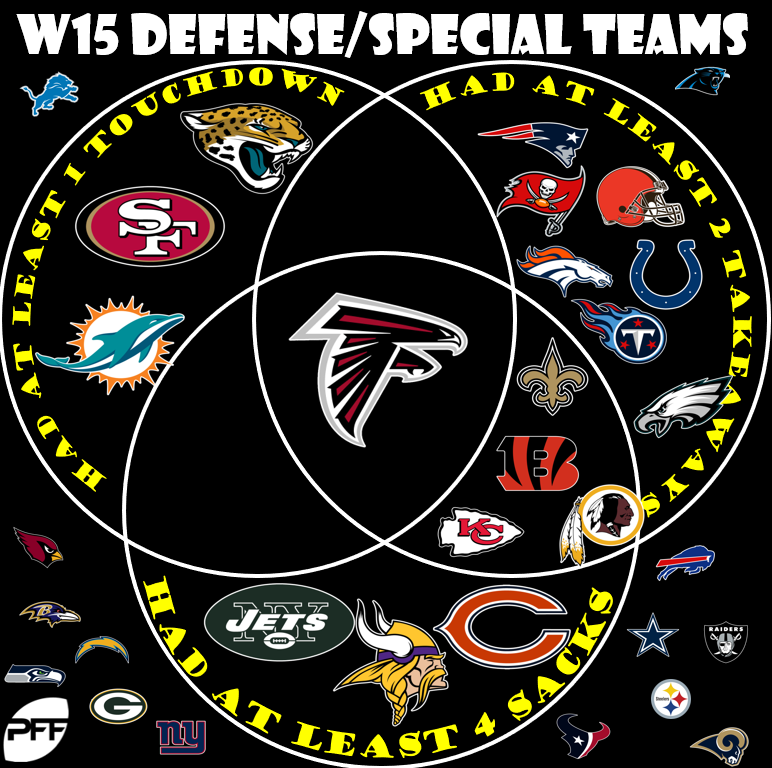 We love to stream DST units with something on the line at this critical point in the season and the Chiefs are in a dogfight with the Chargers to win the AFC West. Kansas City is also battling for home-field advantage throughout the playoffs and have been a hot DST option of late. Last week in their last-second loss to the Chargers, the Chiefs did manage to post five sacks and two interceptions. In their last five games the Chiefs have 21 sacks, 10 turnovers, and a defensive score. The Seahawks allowed three sacks and a kickoff return for a touchdown in their surprising Week 15 loss to the 49ers.

The Texans returned to their winning ways last week led by J.J. Watt’s two sacks and forced fumble against the Jets. This has been a splash-play-led DST unit over the last three weeks as they have racked up five sacks, six turnovers, and a defensive touchdown. It’s been a long season for the Eagles, but they finally showed signs of life with their Week 15 win at Los Angeles. That being said, in his three starts this year, Nick Foles has been sacked five times and has three turnovers. Look for Watt and company to make things very difficult for Foles this week and force an untimely turnover or two as the Texans look to improve their seeding in the AFC playoff positions.

Yes, we like both DST units in this critical Week 16 matchup as streaming options. The Eagles kept their playoff hopes alive with a win at Los Angeles last week and the defense continued to produce turnovers. In the past three games the Eagles have forced seven turnovers and racked up seven sacks. The Texans have protected the ball extremely well of late and haven’t had a turnover in the past four weeks. The offense has struggled to protect the quarterback over that time having allowed 19 sacks in the past four games. At some point the law of averages will kick in and a strip sack or tipped pass will lead to a turnover or two, maybe for Philadelphia this week.

The Chargers are flying high after their last-second victory at Kansas City and are looking to win the AFC West and home-field advantage throughout the playoffs. Los Angeles has been unable to force a turnover in two straight games but has a favorable matchup to break that streak. The Ravens have turned the ball over five times in the last three games and have given up a defensive touchdown. The duo of Joey Bosa and Melvin Ingram combined for eight total quarterback hurries last week with Ingram notching 1.5 sacks. Look for the pair to force the Ravens into a turnover or two in this Saturday showdown. 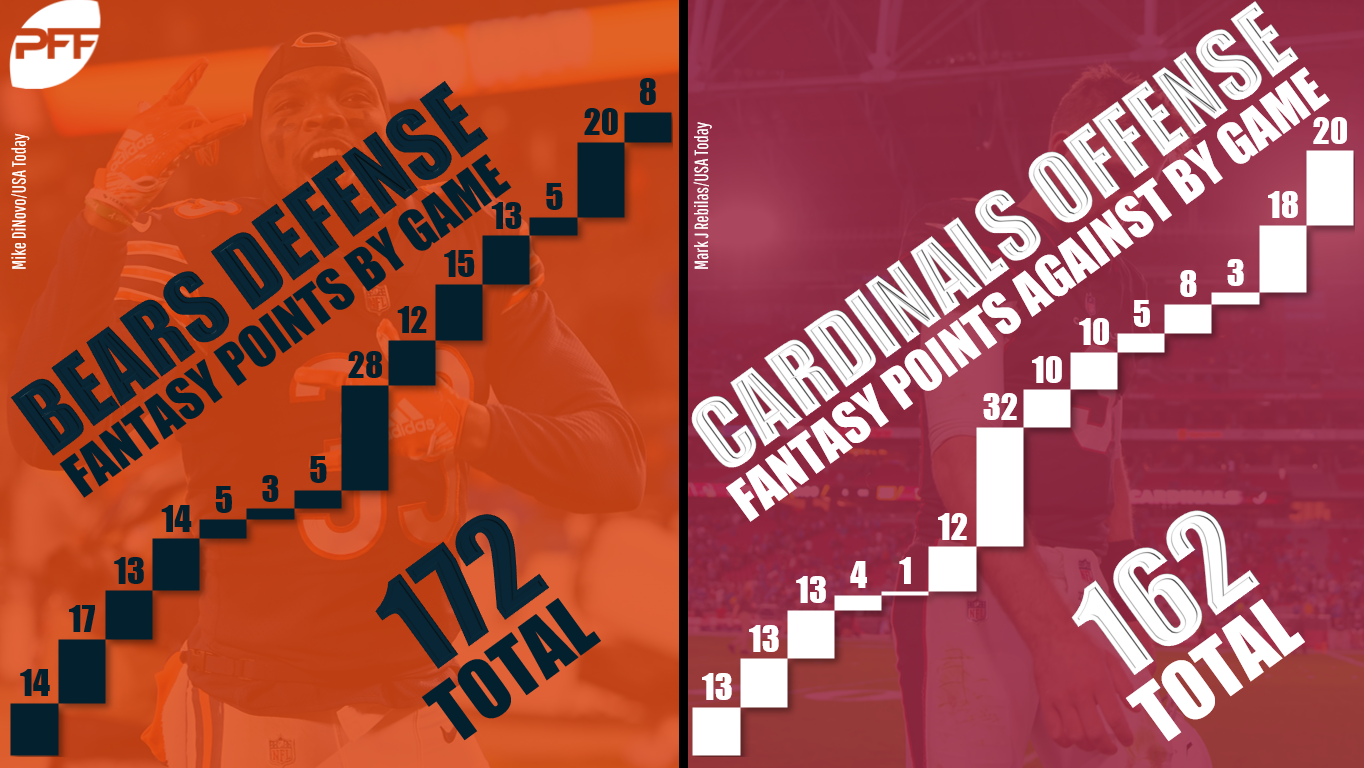 Let’s make this the short-and-sweet special of the week: Always stream against the Cardinals’ faltering offense. Josh Rosen threw two more interceptions last week, with one being returned for a touchdown. The rookie was mercifully pulled in favor of Mike Glennon in the fourth quarter. For the game, Arizona allowed seven sacks and turned the ball over a total of three times. The Rams shut out Arizona in their Week 2 meeting and will be an angry group coming off their Week 15 loss to the Eagles.

The Cowboys were embarrassed last week in a 23-0 loss to the Colts and this will be a DST unit looking to bounce back. Dallas failed to register a sack and finished the game with a single turnover as the Colts rolled up 178 rushing and 370 total yards on what has been a stout defense. The Buccaneers struggle to run the ball, averaging just 97.7 yards per game, and that bodes well for the Cowboys. After going back-to-back games without an interception Jameis Winston has now thrown a pick in each of the past two. Look for Demarcus Lawrence to get back on track in Week 16, leading the Dallas DST unit to a big fantasy outing.

Week 15 was a tale of two shutouts Indianapolis and New York ahead of their Week 16 showdown. The Colts defense was dominant in shutting down the Dallas offense in a 23-0 victory while putting up three sacks and two turnovers. The Giants offense struggled at home in a 17-0 loss to the Titans, allowing three sacks while turning the ball over twice. The Colts’ pass rush has been bolstered with the addition of rookie Tyquan Lewis, who was activated from IR prior to Week 10. Lewis put up his first two career sacks in the win over Dallas and has been credited with 14 total quarterback pressures since returning from the foot injury.

This is the sleeper DST streaming option for Week 16 based on a couple of factors. Despite taking a beating last week at Minnesota the Dolphins are still in the hunt for the playoffs and did manage a defensive score in that game. As often stated here, we like to stream DST that have something on the line. In the matchup with a faltering Jaguars offense, the Dolphins have the potential for a very nice fantasy finish this week. In the last three games the Jaguars have allowed 13 sacks and turned the ball over four times. Look for a big week from both Cameron Wake and Robert Quinn (the duo has a combined 10 sacks and 82 total quarterback pressures) as they harass Cody Kessler all day long.