The best DSTs to stream in fantasy in Week 8

We’re back again for our weekly check-in on streaming defense/special teams options in fantasy football. We can’t all be so lucky to have drafted the New England Patriots defense, who are, somehow, outscoring every wide receiver in fantasy. Without any exaggeration, they have been one of the three most valuable assets in fantasy football this year. And I’m sure not all of you listened to me over the past few weeks and held onto San Francisco’s defense — who now rank right behind the Patriots. Owners of the Bears’ and Rams’ defenses are probably fine, but for everyone else, you may want to consider streaming defenses.

During the offseason, I recommended this approach, and outlined my preferred strategy for streaming defenses week-to-week. Obviously, we’re looking to target good defenses against bad or inexperienced quarterbacks. Bonus points are awarded to defenses heavily favored and/or playing at home. Beyond that, the stats that matter most are opposing passer rating vs. passer rating and sacks per dropback vs. sacks per dropback allowed.

Here are the defenses you should be looking to add in Week 8:

This one’s a no-brainer. The Steelers have quietly been a top-five defense this year, ranking fifth in PFF defensive grade, fourth in fantasy points per game (10.7), third in sacks per game (3.3), and second in turnovers per game (2.5). This week, they draw a dream matchup against a tanking Miami offense that’s given up the most fantasy points per game to opposing defenses (16.7). In fact, if “Miami’s opponent” were a startable defense, it’d rank second at the position, behind only New England. As heavy home favorites coming off their bye, Pittsburgh is a top-three defense this week.

Tennessee’s defense might already be owned in your league, but if not, it should be. The unit is averaging the eighth-most fantasy points per game (9.4), and Tampa Bay’s offense is giving up the third-most to opposing defenses (12.2). Tennessee ranks 11th in sacks per game (2.71), while Tampa Bay’s offense ranks second-worst by the same stat (4.2). Tennessee ranks fourth-best in points allowed per game (16.0), and Jameis Winston ranks bottom-10 all-time in era-adjusted interception percentage. They’re a top-six defense this week. 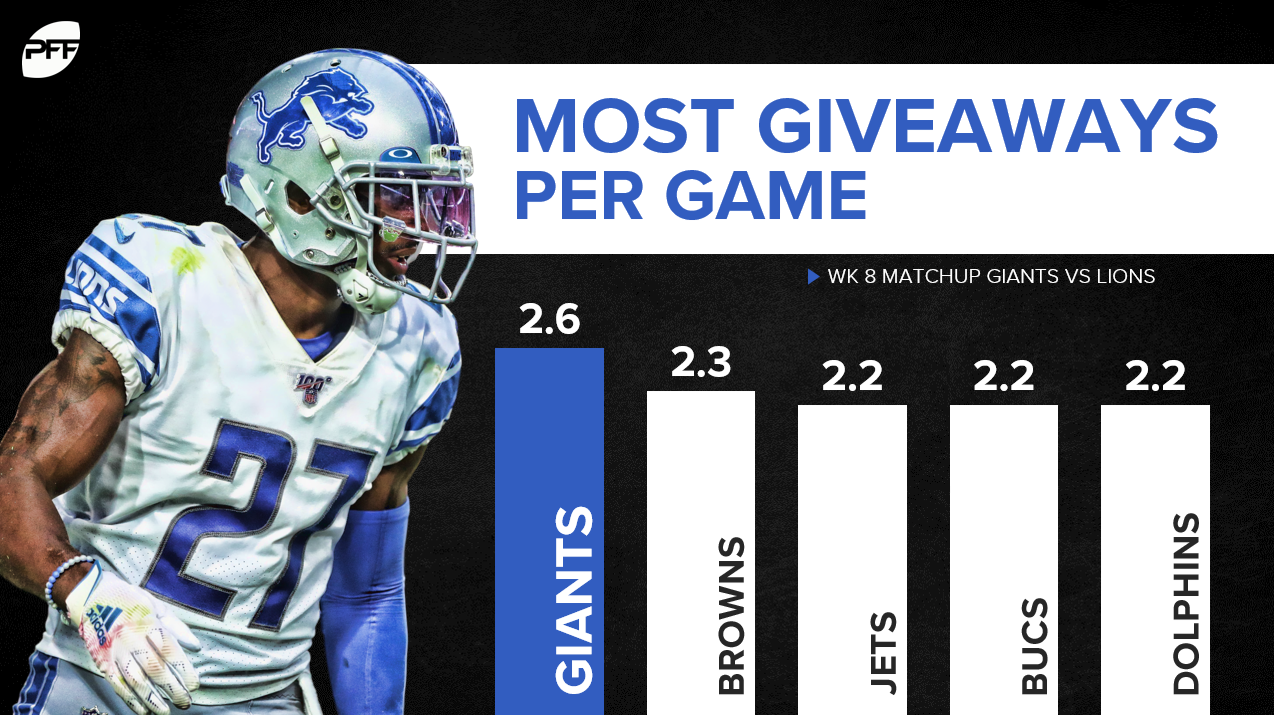 Detroit’s defense has underwhelmed both in real-life and for fantasy. But this would be the ultimate get-right spot, against a Giants team that is turning the ball over on 23.4% of offensive drives (most). Since his first start, Daniel Jones is averaging an embarrassing 3.6 sacks, 1.4 interceptions, and 1.0 fumbles per game. Because of this, the Giants are now giving up the fifth-most fantasy points per game (11.3) to opposing defenses. As 7.0-point home favorites, expect Detroit to finish the week as a top-10 fantasy defense.

If you get out-bid for Tennessee’s defense, you can also consider their opposition. Tampa Bay’s defense ranks 12th in fantasy points per game (8.3) this year, and Tennessee’s offense ranks ninth-worst in fantasy points per game allowed (9.0). Keep in mind, that offense is built through the run game, and Tampa Bay leads the league in rushing yards allowed per game (52.5) and rushing yards allowed per carry (2.71). Ryan Tannehill may be an improvement on Marcus Mariota, but this is still an offense that ranks dead-last in sack rate (12.2%) and fifth-worst in points scored per drive (1.41).

Philadelphia’s secondary is still a nightmare, but the pass rush has been great, leading all teams in pressure rate (41%). This week, they’ll get a Buffalo Bills defense that is surrendering the fourth-most fantasy points per game to opposing defenses (11.4), after giving up the most in 2018 (11.3).