The best DSTs to stream in fantasy in Week 5

Here are the defenses you should be looking to add in Week 5.

Tennessee ranks at the top of our list for a few reasons. First, they’re a very good and underrated defense, ranking top-five in fantasy points scored, sacks (13), interceptions (four), and points allowed (62). Second, they’ve been so good that it’s possible they’re more than just a potential streamer for Week 5 — they could be an every-week starter moving forward. Third, they have an ideal matchup this week, at home against a Buffalo offense that has given up the seventh-most fantasy points per game to opposing defenses and may now be without starting quarterback Josh Allen. Backup Matt Barkley ranks second-worst all-time (of 451 qualifying quarterbacks) in era-adjusted interception rate. Fourth, they also have a top matchup in Week 6, against the Denver Broncos.

Sam Darnold is trending in the right direction to play in Week 5, though that’s not a given. If he were ruled out, the Eagles would be the top streaming defense of the week. New York has the second-lowest implied point total of the week (15.25), while the Eagles are the second-most heavily favored team of the week (-14.0). Philadelphia’s defense hasn’t been especially productive this year, but the Jets are giving up the third-most fantasy points per game to opposing defenses (12.3). They also sport our fifth-worst offensive line by pressure rate over expectation, and the Eagles rank fourth-best by the same stat. 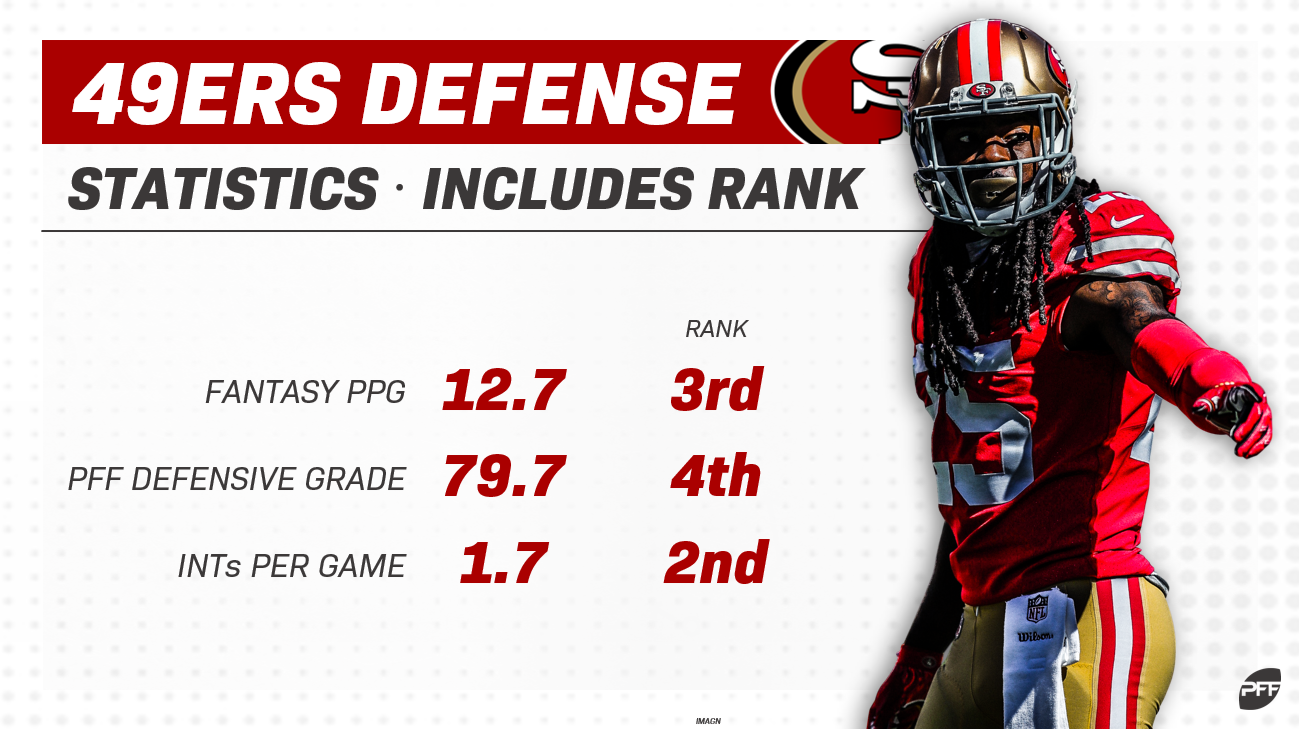 Like with Tennessee, San Francisco is more than just a defense to stream this week — this could be an every-week starting defense moving forward, thanks in part due to a massively improved defensive line following the arrivals of Nick Bosa and Dee Ford. San Francisco’s defense ranks third-best in fantasy points per game and fourth-best in PFF grade, and is well rested coming off of the bye, while Cleveland ranks third-worst in fantasy points allowed (12.3). Even after a big Week 4, Cleveland still ranks fourth-worst in team passer rating, while San Francisco ranks third-best in passer rating allowed.

Tampa Bay is giving up the second-most fantasy points per game to opposing defenses (13.3), after giving up the seventh-most last year (9.0). Meanwhile, New Orleans ranks sixth-best in fantasy points scored. The Saints also rank fourth-best in pressure rate over expectation, while Tampa Bay ranks fourth-worst by the same metric, giving them (tied with Philadelphia) the best pass-rush advantage of the week.

Indianapolis’ offense hasn’t given up much to opposing defenses, but the Chiefs are massive home favorites and their defense does tend to play much better at home. Since 2017, they rank fourth-best in points allowed at home but second-worst in points allowed on the road.

Looking ahead: If you have a roster spot to burn for a week, consider the Redskins against the Dolphins for Week 6. Washington’s defense has underperformed, but Miami is giving up 20.7 fantasy points per game to opposing defenses (most by 7.4).