We stink at picking defenses for fantasy. We just do. It’s not like we’re picking a team to finish first and they finish third and oh well, it’s that we … we’re better than a dartboard, but only somewhat.

Over the last decade, the defensive units we have chosen to take first overall have on average had a 9.5th-place finish at the end of the season. In other words, the team the consensus drafting community is sure will be No. 1 that season is probably a top-10 unit, but barely. That would be like drafting Aaron Rodgers every year and getting Philip Rivers. Is Rivers good? Absolutely! Is he worth the price of drafting Rodgers? Nope.

The inverse of that shows the same thing. Of the 10 DST units to end the season No. 1 in the last decade, not a single one was drafting higher than seventh, per Fantasy Football Calculator. Their average draft position is defense 10.4 … of the ones that actually had a draft position, as three of the 10 defenses in question originally went undrafted.

We wouldn’t accept a success rate that poor out of the other non-kicker positions. Now, obviously, we don’t extend the same capital on drafting DSTs as we do on the other positions, in part because of our inability to nail it. But inevitably, every year, someone questions whether this defense, this year is the reason to go against logic and take that defense early. Jacksonville’s defense is so good, the argument goes, ignoring that Seattle’s or San Francisco’s or Pittsburgh’s defenses were also so good once upon a time and the logic held.

Drafting is all about return on investment. In the early rounds, the key is not making mistakes. Later, it becomes finding value, drafting the player who will offer early-round production on late-round value. Drafting a defense early ignores that. Just a year ago, Denver’s defense was the first off the board, 102nd overall, in the ninth round. A smattering of name taken just afterward:

Yes, the list of players taken after Denver’s defense also includes Jeremy Hill, John Brown, and Donte Moncrief. The point isn’t that there are sure things available that late; if they were sure things, they wouldn’t be available. The point is that you take lottery tickets, and you can’t win the lottery if you don’t play. Drafting a defense in the ninth round is the definition of not playing.

So how do we approximate those defensive points without taking a defense early? The sharps will tell you to stream and research. Weather conditions, tendencies, injury reports, Vegas lines. There are countless avenues for finding an edge, even a small one, for the passionate and knowledgeable football fan willing to put the work in.

Let’s make it easy. Let’s stream DSTs without actually knowing anything about football. Full disclosure, I’m doing this blind. I’ve done it for each of the last four seasons, and it has worked out each year. Maybe I’ll find out that 2017 was an exception. I don’t think so.

(Fantasy scoring systems for DSTs vary by host site far more than the scoring system for the other positions. Everything I’m using is based on the PFF scoring system. Yours might be different! It probably isn’t different enough to matter.)

The points we’re looking for

Floor: This feels like cheating, because the top-drafted DST last year struggled so much, but if we’re trying to get what that early draft pick got, Denver’s DST in 2017 scored 119 fantasy points.

Those are our goals. I expect I won’t have any trouble at all beating Denver’s total, will find my way to a method that beats the middle goal, and might flirt with the top. Let’s find out.

Cleveland allowed the most points to opposing defenses in 2017, and that’s not exactly a surprise, given they entered the season with the league’s worst roster captained by the league’s worst quarterback group. It was predictable. So if you ignored the draft and just used the defense playing Cleveland every week, you would have had … 226 fantasy points! We’ve already beaten Jacksonville. Yay! Let’s go home! 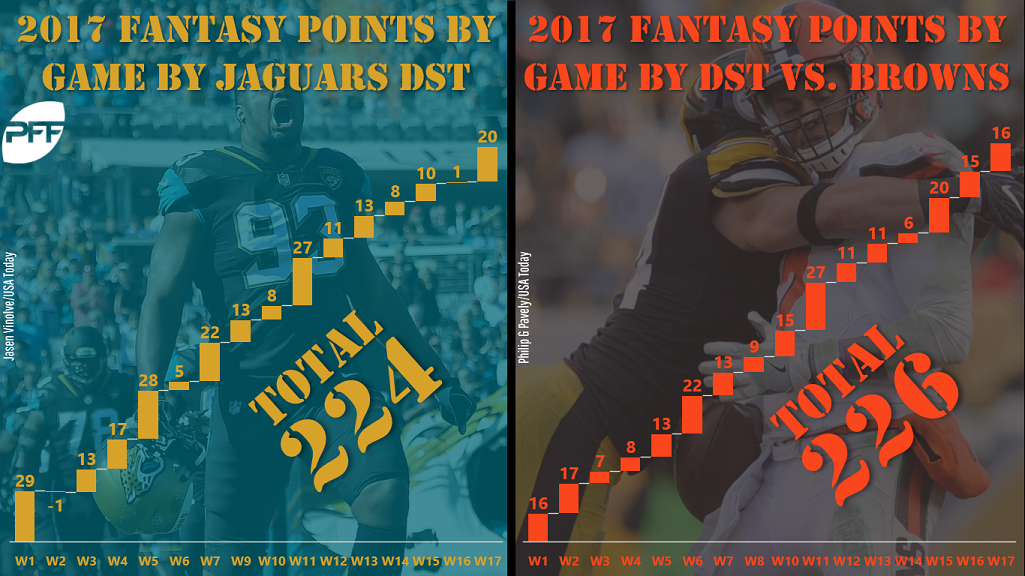 … Okay, it’s not that simple. That ignores, among other things, that many of the defenses Cleveland played were not available on the waiver wire, and therefore could not be played. But it does illustrate that who a defense plays against is just as important as who the defense is, if not moreso. Seven different DSTs averaged 10 fantasy points a game last year. Nine teams gave up that much.

Your phone has a calculator. Figure out how many points a team has averaged over its last three games. If it’s under 20, play a defense against them. (For this and the next method, Week 3 uses a two-game average, Week 2 uses Week 1 numbers, and for Week 1 we’re just using the leaguewide average defensive fantasy total of 9.0 fantasy points.)

Cleveland and the Giants averaged under 20 for every three-game stretch in 2017. Detroit, Jacksonville, New England, and Philadelphia never did. This isn’t perfect, but it gives a pretty decent analogue to poor offense, which is always a fun target for a defense.

Defenses facing struggling offenses averaged 9.0 fantasy points per game. Over the course of the season, that’s 153 fantasy points. Beating Denver’s production is easy. Getting to fantasy-starter levels? We’re not there yet.

Same method as before, but add a wrinkle: Take out every offense starting a top-15-drafted fantasy quarterback. The thinking is simple: A good quarterback should lead to a good offense, and even if they’re on a bad stretch, let’s give them the benefit of the doubt.

Serious impact here: Cutting out the good offenses on a bad stretch brought our performance up to 171 fantasy points. That would have been firmly in starting-DST territory last year, coming in sixth place, one point behind New Orleans.

I think I’ve just about reached the limit of the previous approach. And even if not, the approach was using all defenses, even ones that were most certainly owned. There’s value in it, but 171 isn’t what I’m here for.

So I changed it up and ignored the recency bias of points scored. There were 15 defenses who, per Fantasy Football Calculator, went into 2017 undrafted, or drafted so rarely as to not have a relevant ADP. And as I mentioned above, there were nine offenses that allowed double digit points per game to opposing defenses. (Yes, that is using after-the-fact data, but look at the teams in question: Arizona, Chicago, Cleveland, Denver, Houston, Indianapolis, Miami, NY Jets, Tampa Bay. Tell someone Carson Palmer and Andrew Luck would be hurt, and you might have pegged those as the nine worst offenses entering last year.)

So let’s pit them against one another. Take the average fantasy performance by an underowned defense against the league’s worst offenses. No picking and choosing, just random “nobody wants us” defense against random “nobody wants us” offense. And that results in 182 fantasy points. Right away, we’re in a tie for third in 2017 with the Rams. We’re still a far cry from the Jaguars (and Ravens), but they were scoring at record levels.

And that was the average. Let’s say you nailed it, and each week you picked the best combo of bad defense and bad offense. Unlikely, but at least fun to look at. A perfect approach that way would have netted you 244 fantasy points. And if you were ofer? You happened to pick the worst possible bad-defense/bad-offense pairing each week? You still would have scored 120 fantasy points … or exactly 1 point more than top-drafted Denver managed in 2017.

There you have it. With only the knowledge of “The Browns and Broncos and Jets and their ilk will have bad offenses” and Fantasy Football Calculator’s ADP data for DSTs, you could have stumbled into a top-five fantasy defense, and with luck could have battled Jacksonville for first overall. And you could have saved your mid/late draft picks for lottery tickets, maybe getting Marvin Jones, maybe getting Duke Johnson. It requires a bit more work than blindly drafting who the game provider says is next-best, but … only a bit. And if you actually do know football (which, let's face it, you're here, you know football), you could do that much better.