Streaming a DST in fantasy without knowing anything about football

Every year, the fantasy football analysts say it, and every year, the results show that too many people don’t listen. So I’ll put it frankly: If you draft a defense before very, very late in your draft, you are not playing fantasy well.

This year, it’s the Bears DST. Per Fantasy Football Calculator, the unit is going off the board 94th in drafts this year in current ADP. That’s a bit behind names like Carson Wentz and D.K. Metcalf, a bit ahead of names like Golden Tate and Kyler Murray. Maybe, maybe the unit finishes the year as the No. 1 defense or close. If it does, it will be flying in the face of all recent history in fantasy football. And even if it does that, you will be making a mistake. 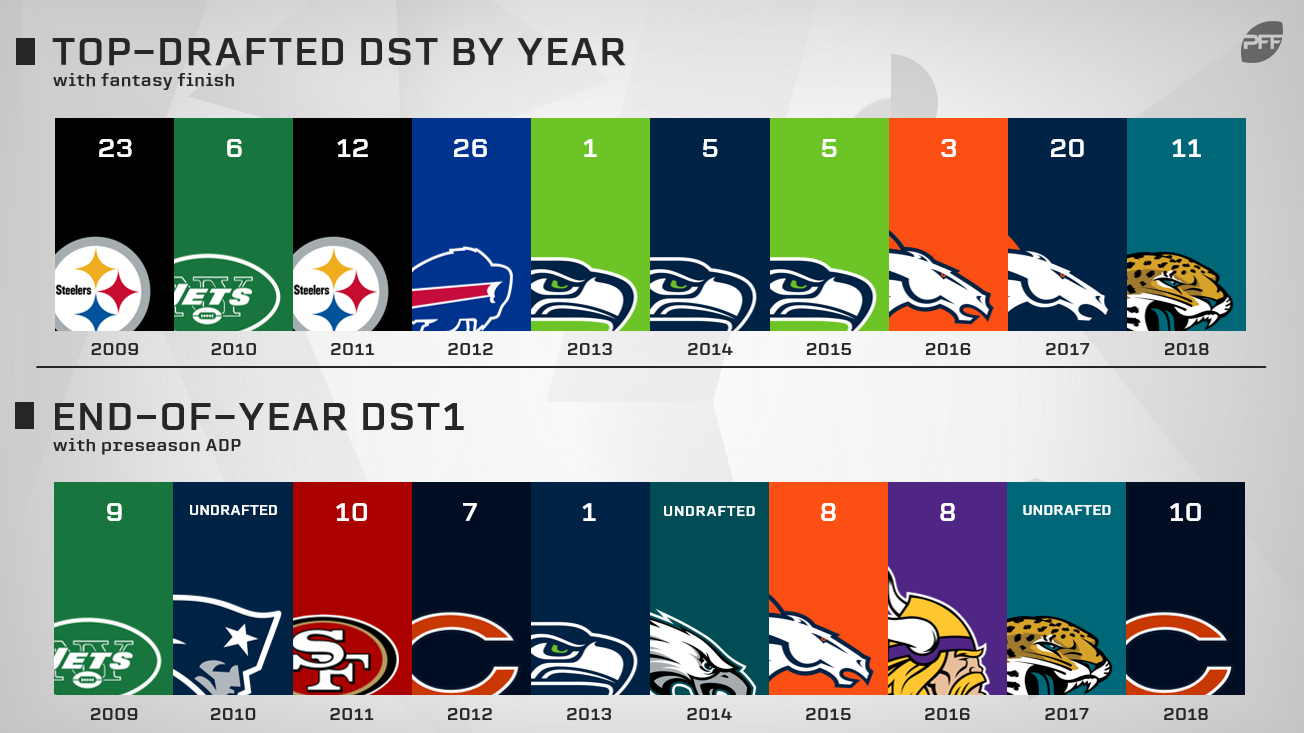 Even if you give the Bears’ DST a little credit for its stock rising after the Khalil Mack trade, the trends over the last decade stay the same — we suck at drafting defenses. A point I made in last year’s version of this piece — the defense we draft first each year tends to finish as a back-end starter. That’s like drafting Patrick Mahomes or Aaron Rodgers and ending up with Kirk Cousins or Dak Prescott. Cousins and Prescott are good! But they aren’t worth the draft capital you have to extend to get a No. 1, and spending it is a mistake.

And now for my annual exercise. I run this experiment as I write this, because this is a journey I want to take together. But it is my argument that we can, as a group, put together a streaming DST plan for the season that would take no draft capital — or last-round draft capital — and we can do it without knowing anything about football.

Literally. You could ignore all football data and all personnel information, look at season results to that point, and make a defensive plan that would beat the No. 1 performer. At least, that’s my hypothesis, and it’s one that has been borne out for as many years as I’ve done this exercise. Now, we do it for 2018. We’ll see if it pays off again.

(Note: Scoring systems vary at every position, but scoring systems at DST differ more than any other position. I use the PFF scoring system. That might not be the scoring system you use. I don’t think it will make a difference, but I would also be incorrect not to note it.)

You can look at it three ways:

Obviously, the goal is to try to beat the No. 1. So 186 points is the threshold we’re looking for in this exercise. But I’ll accept beating 115 just to make it worthwhile.

Here’s what you need: The NFL schedule. Maybe a calculator, if you aren’t feeling particularly mathy on a given day. Average every team’s point totals from the three preceding games. Find the teams with the lowest averages. Play the defenses facing them. Literally, that’s it.

(For weeks before there are three games, average the point totals that are available. For Week 1 games, I simply used the Week 1 DST fantasy-point average of 9.7 points.)

That method is as surface-level as it gets, but it makes sense. Doing so, you’d have never used a fantasy DST against the Rams, Chiefs, Saints, Patriots, Eagles, Buccaneers, or any other of the top offenses in 2018. The Cardinals and Bills and Jaguars pop up a lot, as do the Raiders and Titans and a few others. You’d have used a unit against the Browns once, the Giants once, even the Vikings once.

If you did this and got purely average results each week, your season total of DST points would be 157.0 fantasy points … or better than every DST but the Bears in 2018. You’d have put up at least 3.7 points every week and reached double-digits six times. (And not for nothin’, that point total would have been the No. 1 defense in 2009 and close to it in 2015 and 2016.)

But let’s shoot for the moon. Let’s say you used the “target struggling offenses” method and managed to pick out the best opposing DST each week. It’s unlikely, but imagine it. If you went that route, your season fantasy point total would be … 235.7 fantasy points. Exactly. Without knowing a single thing about football, you could have theoretically been right up near the all-time DST record.

But even on average, you’re putting up a top-two DST fantasy total without extending a single piece of draft capital on your defense, and you’re demolishing the 115 points put up by last year’s top-drafted unit. And remember, this is acting without any knowledge. It required, for example, using the Dolphins DST against the Vikings in Week 15, or the Buccaneers DST against the Cowboys in Week 16. The second you start applying real football knowledge to this process, your score only improves.

But I’m not interested in football knowledge. Not today. Today, I’m interested in proving that you can put up a perfectly fine DST fantasy score without knowing anything, and I’m interested in showing why drafting a defense any earlier than near the very end of your draft is a very bad decision.

The Jaguars were the top-drafted defense a year ago. Going within 10 picks of the unit in ADP were options like Aaron Jones, James White, and Robert Woods. You obviously would have been better off with those options than the Jags. Yes, you also might have ended up with Jimmy Garoppolo, Jordy Nelson, or Matthew Stafford. The point isn’t to find sure things down there. The point is to get as many shots at uber-elite production as you can, and you do that by spending draft capital on picks with a ceiling.

This year, the Bears defense is going, as I mentioned above, 94th in drafts. You can pass on them and grab a Jerick McKinnon, a Kyler Murray, a Corey Davis. Do that. Let someone else draft the Bears. You take your defense at the end.